We’re taking a quick break from all the faction stuff to answer some community questions this week!

First let’s look at the wording of the Stratagem.

Use this Stratagem at the end of your Movement phase. Select one ARCHAEOPTER unit equipped with a command uplink from your army. Until the start of your next turn, enemy models aura abilities have no effect whilst within 6″ of that unit.

So the key thing to unpack here is that the subject of the effect is “enemy model’s aura abilities”, so this isn’t models affected by auras nearby, it’s models that actually have an aura ability. And the entire ability is disabled whilst the model with it is with 6”. So the end result is actually a combination of some of the interpretations you’ve mentioned. 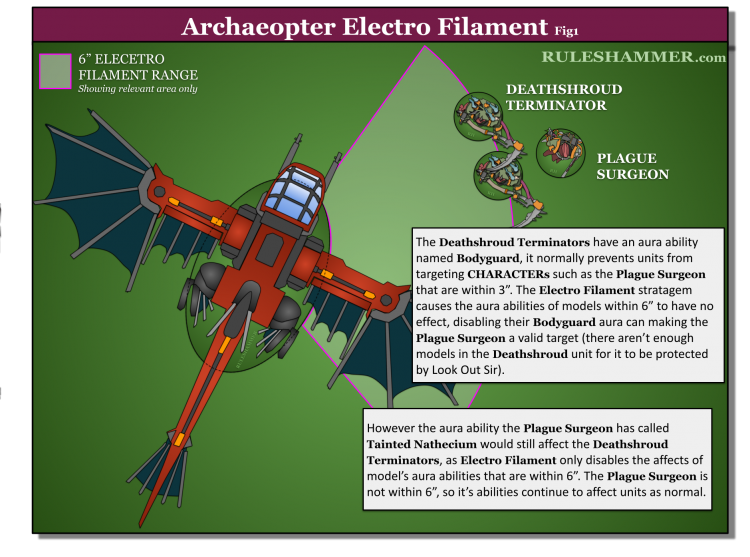 One pretty subtle part of this stratagem is that it only disables the effects of the model’s aura abilities within the area, so if any member of the Deathshroud unit is outside of the 6” range then their auras continue to work. 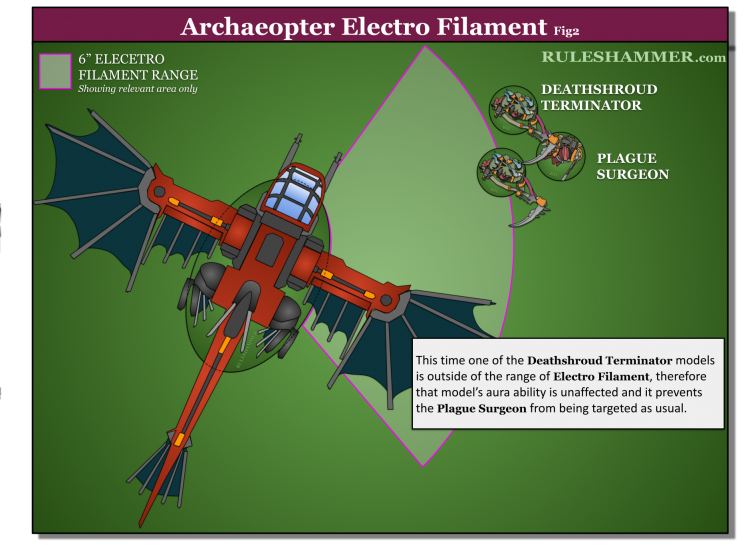 Aeldari – Can I fire and fade Aircraft into Strategic Reserves?

Considering the fact that in the event that an aircraft cannot make it’s minimum move or moves off any table edge, it is put into reserves, would it be possible for you fire and fade and Aeldari aircraft into strategic reserves? The action of going into strategic reserves is not phase bound, but movement bound, I would thusly state that the precedence of fire and fading into a transport would also apply to this. – Elrico Botha

You can’t do this because you can’t use Fire and Fade on AIRCRAFT keyword models.

*Page 119 – Stratagems, Fire and Fade Change the first sentence to read: ‘You can use this Stratagem after an Asuryani unit from your army (excluding Aircraft) shoots in your Shooting phase.’

However if you could use it on Aircraft then it would work, though I would like to mention that moving into Strategic Reserves is bound the movement phase.

But as the stratagem says “as if it were the Movement phase” then these rules would apply, if Aircraft were a valid target for the Stratagem.

Movement – Can I place a model where it doesn’t physically fit?

Had a few readers asking about this recently. There have been arguments that the rules support an interpretation that so long as the base of a model fits (I’ll cover hull models in a later article as those aren’t as debated) somewhere, you can count the model as being there. These interpretations claim that the measurement rules for bases models justify a stance that only the base counts for all rules. This is a pretty broad read of the measurement rules though.

Distances are measured in inches (“) between the closest points of the bases of the models you’re measuring to and from. If a model does not have a base, such as is the case with many vehicles, measure to the closest point of any part of that model; this is called measuring to the model’s hull. You can measure distances whenever you wish.

This section does not cover how models interact with terrain, it’s just about where to measure to. The Terrain movement rules are pretty clear that models can’t move through terrain (breachable being an exception here).

When a model makes any kind of move, it can be moved over a terrain feature but not through it (so models can’t move through a wall, but can climb up or over it).

A model is not just a base – bases are part of a model. The next argument hinges on the Wobbly Model Hint/Tip, arguing that it supports placing models in places they can’t fit. I disagree, here’s the whole wording of that section.

Hints and Tips – Wobbly Models
Sometimes you may find that a particular terrain feature makes it hard for you to place a model exactly where you want[1]. If you delicately balance a model in place, it is very likely to fall as soon as someone nudges the table, leaving your painted model damaged or even broken. In cases like this, provided it is still physically possible to place the model in the desired location[2], you may find it helps to leave a model in a safer position, so long as both players agree and know its ‘actual’ location. If, later on, an enemy model is shooting the model, you will have to hold it back in place so they can check visibility[3].

Emphasis mine but I think these three parts combined prevent Wobbly Model from supporting a stance where models can clip through walls, floors or anything else.

1: Something being hard to do is an understatement if it’s physically impossible.
2: If you need to clip a wing through a floor or wall to put the model where you want it, then it’s not physically possible.
3: You need to be able to hold the model in the actual location for Line of Sight checks

The examples used vary, some even seem reasonable, things like Winged Hive Tyrants. These arguments tend to avoid discussing the more problematic examples like an Imperial Knight suddenly being able to pass through the upper floors of a building. 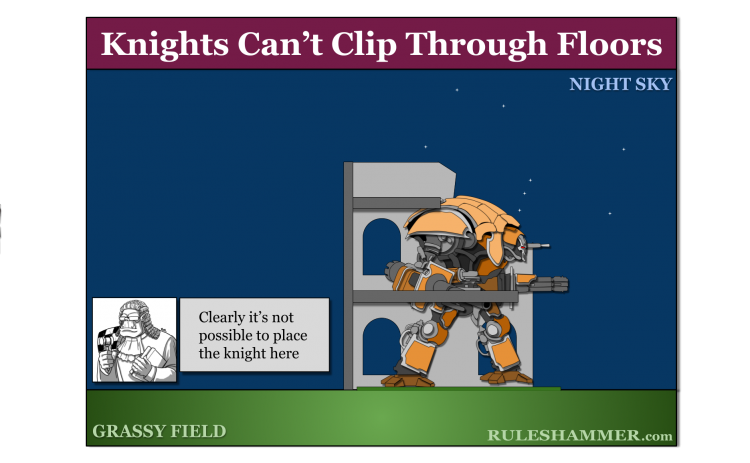 One thing I will note though, is that pregame discussion on the gaps models can fit through is something I will always recommend. Absolutely letter of the rules the gap needs to be wide enough to accommodate the model entirely, not just the base. So a tall model might not be able to fit under a low bridge for instance. I know plenty of players that let models pass through gaps that their bases would let them pass through, this would technically be a house rule though. It is however one that I I’ve used frequently in casual games to avoid too much fiddling with an otherwise good table layout to give models reasonable freedom to move around. There are always going to be pros and cons to being big, being easier to spot and having more limited movement options are some of the cons that counter balance the higher toughness and wounds big models usually have.