Welcome to Ruleshammer, a collection of resources to help explain the detail and complexity of some of the more confusing rules in Warhammer 40k. This week we’re covering some more questions submitted by you, the readers, and our patrons on the Goonhammer Discord. Rob: If you’d like personally hang out with us, crack jokes, and hound “Rules” Rob “Vre’kais” Chilton with the toughest rules questions on the planet and also maybe support the site, consider joining!

Look Out, Sir when the nearest enemy unit isn’t visible

Models cannot target a unit that contains any Character models with a Wounds characteristic of 9 or less with a ranged weapon while that Character unit is within 3″ of any of the following:

These are two separate conditions and both must be met in order to shoot at the character. 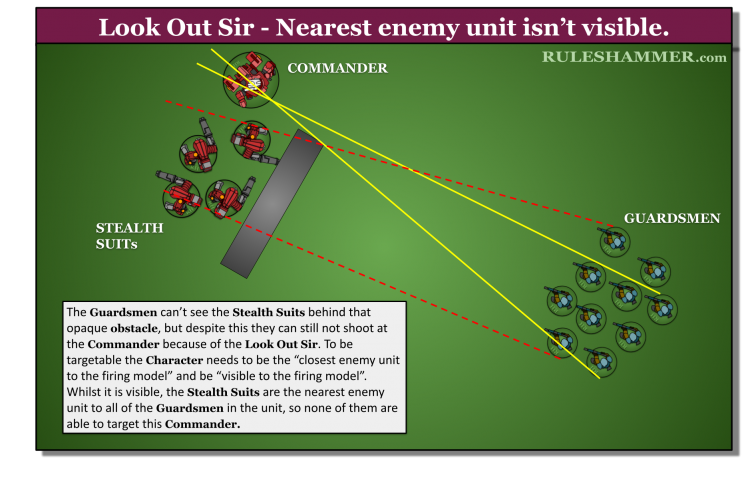 We can contrast this with the wording for Smite.

If manifested, the closest enemy unit within 18″ of and visible to the psyker suffers D3 mortal wounds (pg 19).

Which targets the closest enemy unit but out a subset of the enemy units that are within 18″ and visible to the psyker. 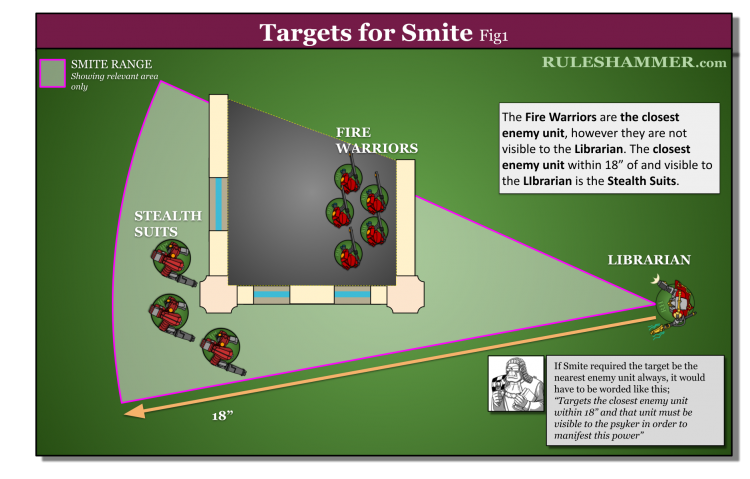 This particular batch of weirdness has been making the rounds lately, especially in Drukhari circles. Due to how Engagement Range in 9th edition is measured, you are within Engagement Range if you are within 1″ horizontally and 5″ vertically of an enemy unit (creating essentially a 5″ tall cylinder for models to enter) – and therefore larger models that measure distances to their hulls and are suspended from the surface of the table can often end up needing shorter charges. It’s almost the reverse of the issue where charging up a ruin is easier that I covered here. 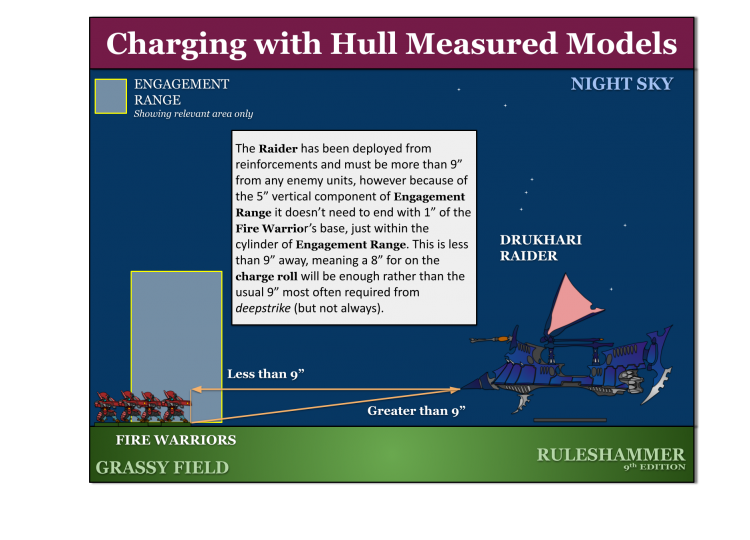 Interestingly two hull measurement models will often have no advantage against each other.

Corrode: Although this works out mathematically, you should probably check with your TO if you’re planning for this to be a significant part of your strategy.

I don’t typically cover previewed rules in Ruleshammer, but this one was being asked about a lot this week and it’s reasonably self-contained so worth addressing early. So what’s the issue? Well let’s take a look at the previewed Stratagem:

The question I’ve been asked is – how is the maximum on mortal wounds applied? Some players are reading this and coming to the conclusion that it’s possibly a max of 6 mortal wounds per model. However I don’t think this is correct based on how damage for mortal wounds from multiple attacks is applied; there’s a rare rule for this:

Essentially this means that when multiple attacks are made the mortals are all saved until after the normal damage the unit has been done has been applied. In this context the limit of 6 mortal wounds would be on this total additional damage done by the unit affected by Wrath of Mars and not per model in that unit.

Tyranids – Consolidating into another unit and using Adrenaline Surge

If a Tyranid unit kills a unit, and consolidates into Engagement Range of a second unit, can it still use Adrenaline Surge? – Adriel

It depends on if the Tyranid unit has charged this turn or not as well as some branches to what the unit can and can’t do depending on whether it has charged. First, let’s check the stratagem:

Adrenaline Surge. Use this Stratagem at the end of the Fight phase. Select a TYRANIDS unit from your army – that unit can immediately fight again.

Now we need to understand what “Fighting” is; it’s defined in the core rules.

FIGHT When you select a unit to fight, it first piles in, then the models in the unit must make close combat attacks, and then the unit consolidates.

So it’s the whole process. Units that are eligible to fight always do so, hence why for instance a unit that charged but all it’s targets have died before it was selected is still allowed to make a pile in and consolidate move as usual (though often towards a much further away nearest enemy unit). Here’s where it branches.

The Tyranid Unit Charged This Turn

If the Tyranid unit charged this turn, then whilst you can still use the stratagem the unit can only target melee attacks into either a unit it declared as a target of the charge or an enemy unit that performed a heroic intervention this turn. Because charges need to reach all their targets in 9th edition it’s unlikely that a unit you reached via consolidation would have been a charge target. You can still use the stratagem, but the unit would only be able to pile in and consolidate even if they don’t have any valid targets to attack. One possible way to make use of this is if you can declare a charge against a second unit and just get one model in range so you reach the target, and then use your consolidate/pile-in movement to bring more models into range once you’ve cleared the first one.

So for this situation to arise the unit must have been charged into and then slaughtered its attacker. If consolidation did manage to reach another enemy unit’s engagement range then you could use Adrenaline Surge here and be allowed to target that unit with melee attacks, as the only requirement for a unit that didn’t charge is to be in Engagement Range. However…

Due to the fight again Rare Rule, the target of this strat must be an eligible unit already.

Some rules allow units to fight again in the Fight phase, or fight ‘as if it were the Fight phase’. Such rules cannot be used on a unit unless it is eligible to fight at the time when that rule is used. Remember that a unit is only eligible to fight if it is within Engagement Range of an enemy unit, or if it made a charge move in the same turn. In addition, all the normal targeting rules apply to a unit that is using a rule to fight again (e.g. if the unit made a charge move this turn it can still only target enemy units it declared a charge against or that performed a Heroic Intervention).

This prevents using the Stratagem to fight again with an ineligible unit and using pile in to reach a target.