Another week another Ruleshammer Q&A. This week I decided to address some real core mechanics issues that people have asked about after a few weeks of advanced but weird stuff. Only two questions this week but I plan to go into a bit more detail on them as they cover some fundamentals that new players might miss.

Question 1 – Shooting through other units

Is it possible to shoot through a Melee to hit a target behind the Melee?

I hope you don’t mind but I’m going to widen this question out a little to cover shooting through other units in general, as well as a model shooting through its own unit. Line of Sight doesn’t have a massive amount of rules explanation dedicated to it, in fact this is the entire section.

Only enemy units can be chosen as the target for an attack. In order to target an enemy unit, at least one model in that unit must be within range (i.e. within the distance of the Range characteristic) of the weapon being used and be visible to the shooting model. If unsure, get a look from behind the firing model to see if any part of the target is visible. For the purposes of determining visibility, a model can see through other models in its unit. If there are no eligible targets for a weapon then that weapon cannot shoot. If this is the case for all of a unit’s ranged weapons, then that unit is not eligible to shoot with. – [Core PDF Pg15]

This actually answers part of our question pretty quickly though. Models always ignore other models in their own unit for checking visibility. This doesn’t mean they ignore other units though, friendly or not. You need to resolve this on a case by case basis. I want to pay specific attention though to this part.

Line of sight is not a check from the head (or other sight organ storing appendage) of the firing model to its target. It is if any part of the target enemy unit visible when you take a look from behind your unit. What’s important for fair and even play here is that both parties agree parts count when visible to the enemy, this has varied from edition to edition so it’s not always safe to assume both players share the same definition of “any part”.

Bases are one example. I, for instance count the base of a model and any flying stems, I do this because “models have bases” in the same way in the rules that they have arms, legs, heads, wings, or a hull. A base is part of a model, though I grant that this is at least partially an interpretation. I favour it because honestly as a Tau player it is otherwise too easy for me to hide Tau Drones behind other floating things. Personally I feel this treats them too much like static statues than flying machines moving around scanning for threats, counting the base is a level of abstraction that levels the playing field.

Some players also tend to exclude things like antenna, or make a “common sense” ruling when the only visible part of an entire unit is a tiny slither of leg or wing. I would let a dice decide in these cases if both players disagree (if you disagree for more than 30 seconds I’d always suggest using a dice, then get back to having fun having let change decide). However, note that for tournaments the overwhelming majority play “any part of the model” strictly rules as written to avoid any ambiguity, so all parts are assumed as fair game including extras like antenna etc.

Editor’s Note: In addition to that, some large events have actively ruled that the base of a model doesn’t count for Line of Sight purposes in the past. It’s relatively unusual for you to be able to see a model’s base but not the model itself, but do check your event packs carefully just in case it comes up.

With this agreement we can look at some examples for models that are visible and that aren’t. 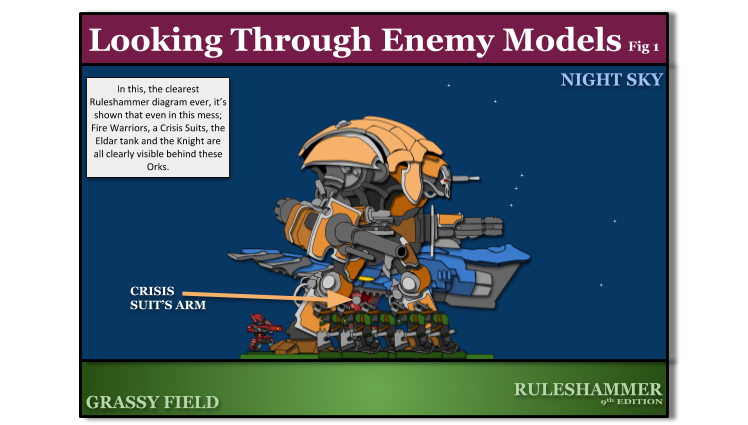 Generally it’s agreed that unless the unit is really super dense it’s unlikely most units of Infantry to fully block LoS, so it’s generally accepted that you can shoot through them, to an extent. This will vary depending on several factors such as the height of the models, their facing and the sheer number of models you are attempting to shoot through. 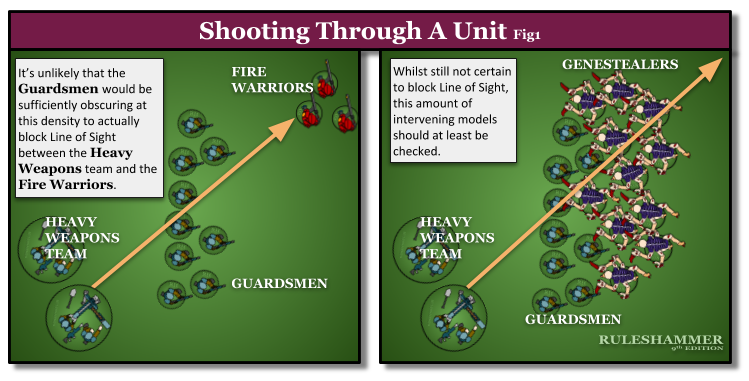 Question 2 – Who can my unit fight when they charged?

Is it possible to fight a unit behind another unit you charged if you declared charge to both units but can only touch the the front unit?

Potentially yes, though there’s a super specific set of positions required that make it unlikely to be possible every game. I’ve made these diagrams before to illustrate how charges and fight range have changed in 9th, but not one that covers this specific circumstance. Remember though that you must reach engagement range of all targets when charging, so if you mean that you couldn’t reach the other unit’s Engagement Range when you say “only touch the front” then not only would you be unable to fight them, your unit would have failed it’s charge. 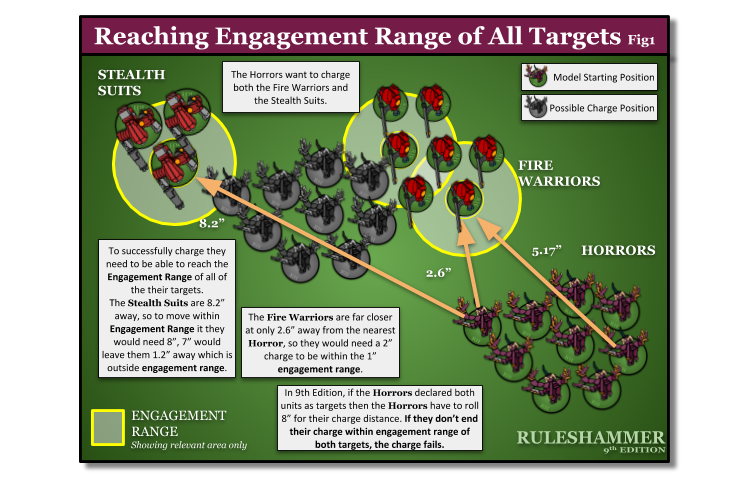 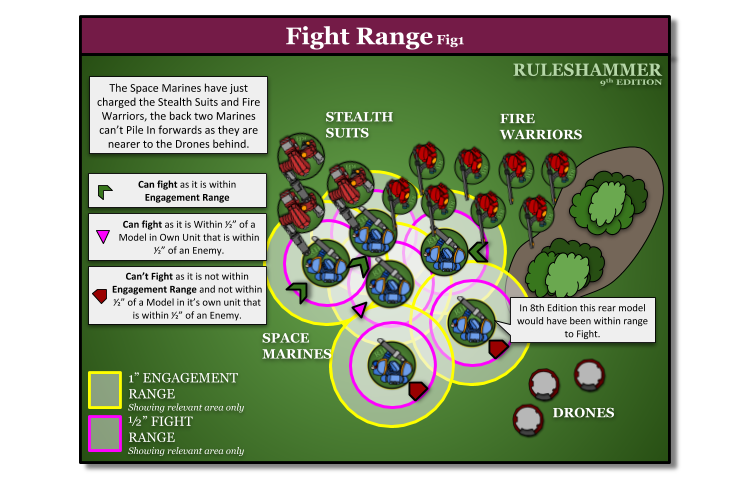 If your unit charged this turn then to be able to fight a unit behind another you need to meet these criteria. 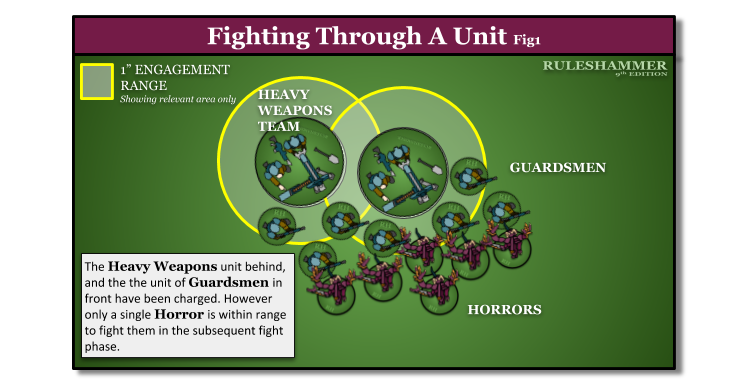 Generally gaps like this will not be common, and pile in will usually not let you move around the front unit too far because you must move towards the nearest enemy model when doing so.