After what must be days since I last had to talk about them, here’s another Ruleshammer that is at least 50% Transports related.

Question 1 – Monoliths as a Transport

The new Eternity Gate has changed a few things in the new Necron Codex and whilst I haven’t been asked yet, I figured we’d go over it now. We all know how much I love transports (ironically I do run a mechanised Tau army, I’m just a glutton for punishment).

Eternity Gate: In your Movement Phase, if this model Remains Stationary, then in the Reinforcement step of that Phase it can summon a unit. If it does, selection one <DYNASTY> CORE INFANTRY unit from your army that is in Strategic Reserves: set up that unit anywhere on the battlefield that is wholly within 3” of this model and not within Engagement Range of any Enemy models. Models in units that are set up using this ability count as having moved a distance equal to their Move Characteristics in the Movement Phase.

So this changes a lot of things about Eternity gate.

All this adds up to a pretty significant change, and it’s worth noting that if the Monolith uses Death Descending to arrive on the board then it can actually only use Eternity Gate once in a GT2020 game. This is because the Monolith itself can only arrive in Turn 2, and when it doesn’t meet the criteria of having Remained Stationary. On turn 3 it finally can Gate a single unit in, but it can’t gate any more in in turns 4 and 5 because by that point any units that are still in reserves are destroyed.

Wings Note: you do have one way round this, which is to use the Prismatic Dimensional Breach stratagem. This lets you set up a unit in the same way as above in your reinforcements step – but crucially it doesn’t have the requirement that the Monolith remained stationary. This means that as it currently stands you can use it to bring a unit in straight after the Monolith itself deep strikes. It wouldn’t shock me to see this errataed so that the Monolith has to have been on the battlefield at the start of the phase, as it essentially lets you deep strike a unit from Strategic Reserves only 6″ away from the enemy, something usually reserved for very specific and telegraphed stratagems, but it works for now.

So what was I talking about when I mentioned Auspex scan and units inside Transports? Well… 8th edition had quantum teleporting  turrets… 9th edition has Schrödinger’s reinforcements. Here’s the issue. You take a transport, let’s say a Rhino and you put a squad of Tactical Marines inside. You pay the CP required to put this Rhino and it’s contents into Strategic reserves. Here’s where the first rule of this mess kicks in.

If the transport started on the board there would be no issue but by putting the unit in strategic reserves inside a transport you have made that unit also a Reinforcement unit. Here’s why that matters.

Any strategic reserves or Reinforcement Units that has not arrived on the battlefield by the end of the third battle round counts as having been destroyed, as do any units embarked within them (this does not apply to units that are placed into strategic Reserves after the first battle round has started). – GT2020 Pg6

So the transport is deployed in turn 2 using the strategic reserves rules, it has moved as per the reinforcement rules so the unit inside can’t disembark in that turn. If you decide not to disembark the unit in turn 3. What happens to it? It’s a reinforcement unit, so is it dead? Is it on the board or does being in a transport not count? So many questions. Rules as Written I think it might actually count as destroyed if you leave it in there, that is however very silly.  So I am once again suggesting a fix.

The other part of this issue is does the unit count as setting up a reinforcement unit when it disembarks? There was an FAQ in 8th edition for Drop Pods that said that the stratagems such as Auspex Scan allowed you to shoot at the drop pod but would not allow you to shoot at the occupants. Let’s check the wording for the new Auspex Scan to see if that clears things up.

Auspex Scan: Use this Stratagem at the end of the Reinforcements step of your opponent’s Movement phase. Select on ADEPTUS ASTARTES INFANTRY unit from your arm that is not within Engagement Range of any enemy units. That unit can shoot as if were your shoot ing phase. Its models can only target a single eligible enemy unit that was set up as Reinforcements this turn and that is within 12” of their unit when doing so.

That does leave the Drop Pod in a sort of limbo though, the units getting out are reinforcements, they are being set up in the reinforcement step, but they are also disembarking. There’s not even really a call for consistency to be made with the Monolith because that model can’t have a unit deploy out of it on the turn it arrived, though the units it does bring in definitely count as eligible targets for Auspex scan when they are deployed.

Time for something new in Ruleshammer History… a Lighting round. There’s nothing special about this round, other than my answers being short. It’s not like I have a backlog or anything, keep the questions coming!

Hello! The Astartes Banner changed from INFANTRY to CORE. Does this mean that dreadnoughts and bikes can fight or shoot on death? – Bridges

Question 4 – Fire And Fade into a Vehicle

Do rules like Eldar stratagem Fire and Fade, or psychic power Quicken, allow a unit to embark in a transport? – Brandon

Yes, currently this stratagem does allow you to embark as the rules for embarking only require that you end a Normal, Advance or Fall Back move with the unit wholly within 3”. This relies on the assumption that “move as if it were the movement phase” includes choosing which kind of move you are making, but a wide variety of things break down if that isn’t the case, so for now this works.

Wings Note: I’m honestly surprised this one hasn’t been clarified either way yet, as it’s a notable change from 8th that’s theoretically very good for my beloved Space Elves. The fact that they are performing like garbage on competitive tables is probably why no one’s cared enough to do anything about it.

Question 5 – Who Can Rapid Fire

Rapid fire shooting – Double the amount of shots if the unit is within half range of the selected models. When you fire, you can select units in range eligible to fire at. If the closest model of a unit is the only model within half range but is obscured, are you still able to rapid fire at the unit? – Rafael

Range and Line of Sight is measured per individual model, so if only one model is within Rapid fire range then only that model can fire it’s weapon twice.

In order to target an enemy unit, at least one model in that unit must be within range (i.e. within the distance of the Range characteristic) of the weapon being used and be visible to the shooting model.

When a model shoots a Rapid Fire weapon, double the number of attacks it makes if its target is within half the weapon’s range.

The target of an attack needs to be visible and be in range, and Rapid Fire keys off the selected target on a per-model basis. Therefore, the closest model in the target unit that each of your models can see determines whether they can Rapid Fire on a model by model basis. 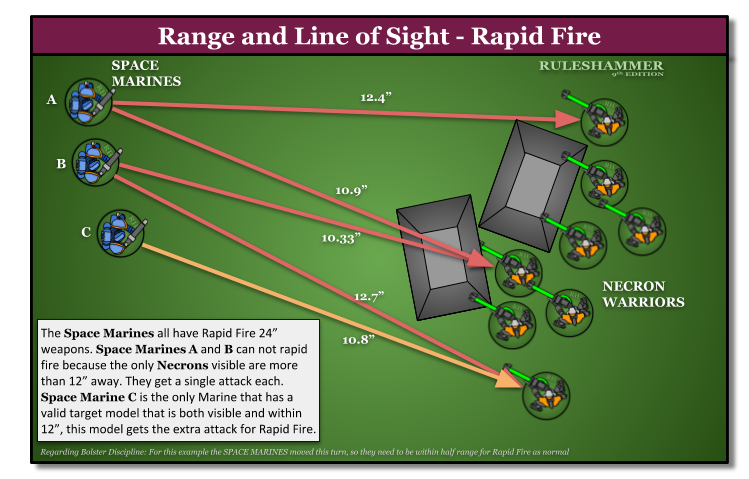 When doing an overwatch, does the weapon I’m using have to be in range of the charging enemy. The question is about grenades. – Hubert

Yes, Overwatch is a shooting attack. The only thing special about it is that rather than use your units Ballistics Skill it usually only hits on an unmodified 6 (though that can of course be changed by other rules).