Another week another Ruleshammer Q&A… I talk about Open Topped Transports again… of course. I swear there are other rules.

Smites wording in 8th was “If manifested, the closest visible enemy unit within 18″ of the psyker suffers d3 mortal wounds….” and in 9th, the wording is now, “If manifested, the closest enemy unit within 18″ of and visible to the psyker suffers d3 mortal wounds…” It was argued that the wording change means smite can no longer snipe targets because of placement. If an enemy unit is closer, but the psyker cannot see them, no other unit would meet the requirements for smite targeting as it now has to be the closest enemy unit to the psyker AND visible. Did smite actually change or is my group reading into to this too much? – Michael

Short answer, yes they’re reading into it too much. The result of both these sentences is the same target limitations. 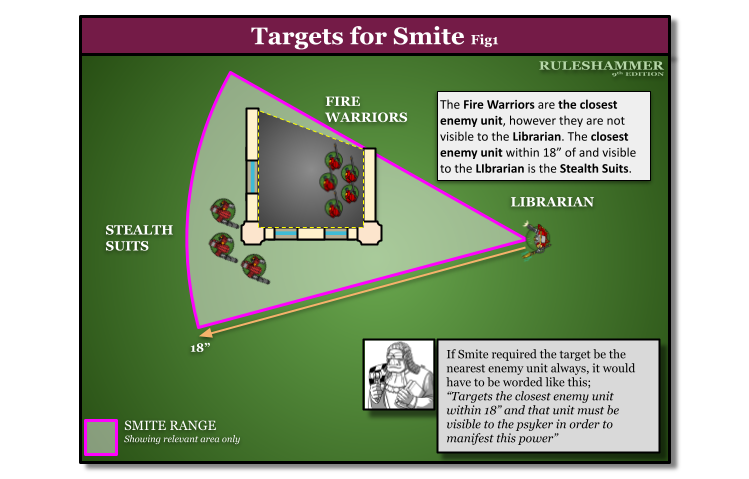 I had a few people ask me about this week, and it came up a few times in games. There’s a Rare rule for shoot again abilities that clears it up.

Some rules allow units (or sometimes models or weapons) to shoot again in the Shooting phase, or about (as if it were the Shooting Phase”, Such rules cannot be used on a unit unless it is eligible to shoot at the time when that rule is used. When a unit shoots again, any models in that unit that have already shot with any of the weapons they are equipped with earlier in that phase can shoot with those weapons one additional time.

If a rule allows a unit, model or weapons to shoot again, then it must completely resolve its first shooting attacks before resolving the second. This can be at a different target. If a rule is used to make a unit shoot again at the end of the Shooting Phase, that phase does not end until after all these rules have been resolved. – [GT2020 Pg89]

Few things to unpack here. First what is shooting? Shooting is going through all of the steps of the shooting phase, from picking a unit through to removing enemy models. This means that shooting again also means checking for LoS and Range again. A lot of these rules require units to pick the same target twice, but for the second round of shooting the target unit could be out of range or out of sight once casualties from the first round are removed. 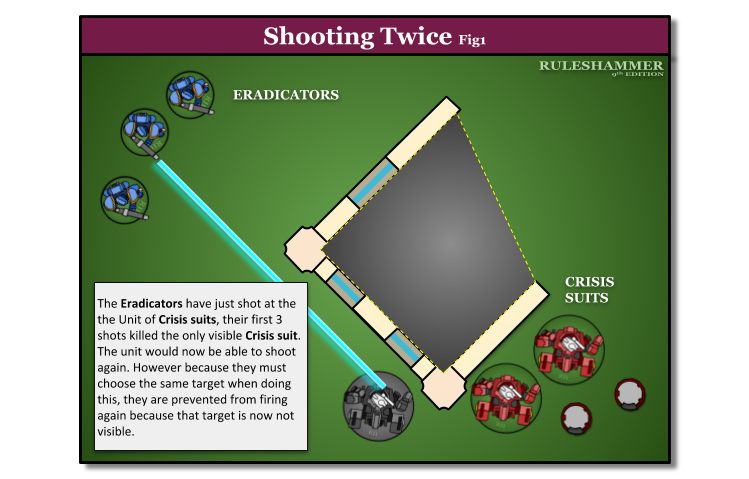 This wasn’t ever really explained in 8th – maybe it was meant to be like this all the time but we do at least now have some clarification now. It also helps to make these abilities distinct from the weapon just having more shots. It also means that if there is any chance of targeting criteria (including the effect of Blast) changing after the first round of shooting, you need to resolve them separately.

EDIT: There is something that remains unclear about the shoot gain rare rule, some argue that it doesn’t cover shoot twice abilities though I do disagree. The more ambiguous aspect is whether shooting twice counts as “activating the unit” a second time. Personally I lean towards the answer being no, as most of the “shoot twice” abilities have you resolve the second set of attacks immediately after the first set, so you don’t actually activate the unit again. The majority of “shoot again” abilities though, are a second activation of the unit and would benefit from any rules that apply (such as getting re-roll a single hit for a trait or ability). 9th does not make any distinction I’ve been able to find for how to resolve these attacks though, both shoot twice and shoot again follow all the shooting steps including picking targets (though often from a limited set of one), checking Range and Checking Line of Sight.

Kharn’s weapon reads “This weapon always hits on a 2+, regardless of any modifiers”. The Armour of Shadows Raven Guard Relic reads “…when resolving an attack against this a model from your army with this Relic, an unmodified hit roll of 1, 2, or 3 always fails”

If Kharn is fighting a unit with this Relic, what happens when Kharn attacks? I interpreted the ‘Always hits’ and ‘regardless of any modifiers’ portions of the Gorechild rule meaning that it would ignore the Armour of Shadows, but it’s not clear to me this is correct.  – Wes

Okay so there’s a rare rule for this situation as well.

Attackers Priority While resolving attacks, you’ll occasionally find that two rules cannot both apply – for example, when an attacking model with an ability that enable it to always score a successful hit on a 2+ targets a model that has an ability that states it can only be hit on a 6+, When this happens, the attacking model’s rules take precedence.- [GT2020 pg90]

So for your specific example it is correct to play it as the 2+ rule would work and ignore the effects of the Raven Guard Relic. Really cannot emphasise enough how many rules issues are resolved by the Rare Rules section, it’s a great addition to the tools Games Workshop have to deal with these challenges as they arise.

Question 4 – Harlequins Shooting from Open Topped Transports, where to measure from

Can harlequin players still shoot pistols from any point on the physical model (hull if hull still existed on models with a base) of an open-topped transport? In case this needs some clarification, there has been some discussion on a TTS Discord about whether “model” now consistently refers to a model’s base due to the new verbiage in the measuring distances section. – Erick

So apparently a Ruleshammer where I don’t mention Transports and Open topped is just not going to happen ey? Well. Fine. Let’s look at the particulars for this issue, first measuring distances in 9th.

Distances are measured in inches (“) between the closest points of the bases of the models you’re measuring to and from. If a model does not have a base, such as is the case with many vehicles, measure to the closest point of any part of that model; this is called measuring to the model’s hull. You can measure distances whenever you wish.- [GT2020 Pg58, Core PDF Pg5]

Okay so you only measure to the hull by default if the model doesn’t have a base. Raiders and Venoms do have bases but also their version of open topped has oddly not been updated by the FAQs.

Starweavers (and a few other Eldar transports) have always been a bit odd, despite their open topped rules saying to measure from “any point on the model” they don’t have an equivalent of the hover tank rule the proper tanks have. So measuring for the vehicle itself is from it’s base. This means that the passengers can actually be closer to enemy models than the tank itself is. It is odd that this rule hasn’t been updated but it’s also pretty clear that for the units inside you should measure from the hull, because the rule specifically tells you to do so.

I agree that you must roll high enough to be able to engage every unit you charged while maintaining coherency. However, where does it say you must move your charging unit to engage all units you declared a charge against?

I don’t see what is allowed to charge a unit with Aircraft. I only see where units can’t end their movement within engagement range if a unit wIth the Aircraft keyword. Thanks!  – Chris

Okay so two parts to your question, lets deal with the first. Where does it say that you must end your charge within Engagement range of all targets.

To make a charge move, the unit’s charge roll must be sufficient that it is able to end that move in unit coherency (pg 4) and within Engagement Range (pg 4) of every unit that was a target of its charge, without moving within Engagement Range of any enemy units that were not a target of its charge. If this is possible, then the charge is successful and the models in the unit make a charge move so as to fulfill the above conditions. If this is impossible, the charge fails and no models in the charging unit move this phase. [GT2020 Pg72/73, Core PDF Pg19/20]

This is where it says it. Though I think the bullet points for this rule could have made it clearer, but some of these bullet summaries aren’t entirely helpful it’s not too surprising. What are the above conditions?

So when you roll you need to be able to move to meet those are the conditions, and if you do have enough movement to do it you need to then move to fulfil them. 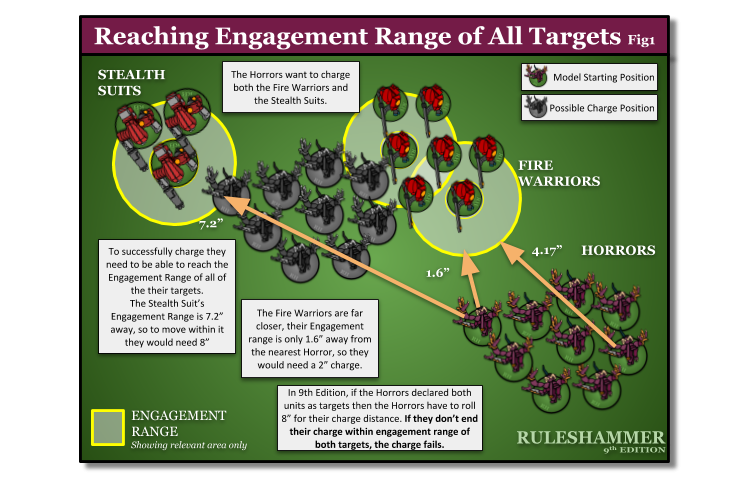 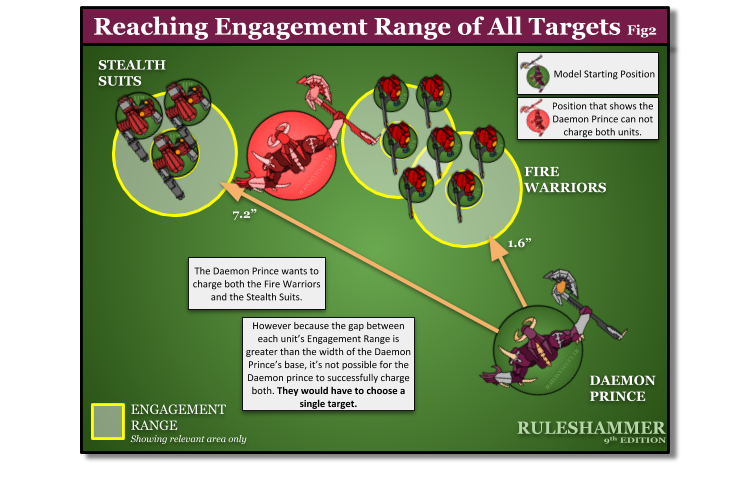 On part two, charging flyers, though yeah; it’s a bit broken RAW at the minute. This section of the AIRCRAFT rules is why.

As models can’t end within Engagement Range of them when making ANY kind of move, with no exception for models that can Fly. You can read more about AIRCRAFT and their rules here. However…

Wings: We obviously do not think this is the intent or endorse playing like this – this will be swiftly fixed, as it’s clear from other rules that FLY units are still supposed to be able to melee AIRCRAFT. I cannot imagine any TO worth their salt seriously arguing that all AIRCRAFT are always unchargeable, even by units with FLY, and people shouldn’t try and argue it in their home games either!