Welcome to Ruleshammer! This week some updates for Thousand Sons, some Q&A from your submitted questions, and also the first Kill Team question!

Today we’re looking at some of the updates from last week’s FAQ on Thousand Sons and how they change some of our previous content. You can find more Ruleshammer Thousand Sons content here on an ongoing basis!

Can an affected model allocate “Additional Attacks” to a model with the Conniving Plate?

We now have an FAQ that confirms that my answer below was accurate. I’ve highlighted a few changes here, however!

Q: Does the Conniving Plate Relic affect abilities that generate any additional hits, or allow multiple hit rolls to be made for each attack?

A: These abilities are unaffected. The Conniving Plate only affects the initial number of attacks made by a model when these are allocated during the Select Targets step of the Make Close Combat Attacks sequence (including any additional attacks granted by abilities of weapons such as an Astartes chainsword).

For this I’m going to provide an example of how rule works using a Lord Discordant, a model with a bunch of weird and wonderful extra attacks.

The Lord Discordant on Helstalker is a single model:

A Lord Discordant on Helstalker is a single model armed with an autocannon, bolt pistol, impaler chainglaive, mechatendrils, frag grenades and krak grenades. His Helstalker is armed with bladed limbs and tail and a techno-virus injector.

so I think step one is to determine the total total number of attacks after all abilities, including the Hellstalker as these need to be declared at the same time anyway (their wording is after resolving the Disco’s attacks, not after he fights).

After the Lord Discordant makes his close combat attacks, you can attack with his Helstalker. Make a number of additional attacks as shown in the damage chart, using this weapon profile.

And can then only allocate 7 of them, of any of the weapons above to the Conniving plate model. It was 6 previously but now the 6.5 attacks (half of 13) rounds up.

Add the following to the end of the second bullet point: ‘(rounding up)

So models with 1 attack can allocate up to half of their attacks, rounding up, into a model with the Conniving Plate. So that’s up to 0.5 rounding up to 1 again.

The new FAQ had added wording that confirms my answer for this issue was correct.

You can’t use it until the pyschic test has a final result, which is after deciding on any re-rolls.

Related to Thousand Sons but not really part of their Ruleshammer level issues is the subject of Redeploy Stratagems. There are now contradictory FAQs, and some books that have them that don’t have this FAQed. Applying FAQs from a faction to another faction is always a bit of a grey area (see below) but this is a bit more messy.

Rapid Redeployment
At the start of the first battle round, before the first turn begins, select up to three ULTRAMARINES units from your army on the battlefield. Remove them from the battlefield and set them up again as described in the Deployment section of the mission (if both players have abilities that redeploy units, roll off; the winner chooses who redeploys their units first).

Ultramarines FAQ
Q. When setting up a unit again using the Rapid Redeployment Stratagem, can that unit use any abilities that allow it to be set up in other locations (e.g. Teleport Strike)?

Compare this to the new Thousand Sons FAQ and ability for Master Misinformator:

Master Misinformator
At the start of the first battle round, before the first turn begins, select up to D3 CULT OF DUPLICITY units (excluding VEHICLES) from your army. Remove those units and this WARLORD from the battlefield then set them up again following the normal deployment rules for the mission being played.

These are very similar abilities, but the Ultramarines FAQ answer was written during 8th edition and the Thousand Sons one was a few weeks ago. Once again we’re left with resolving this in the pregame discussion and personally I strongly believe that the Thousand Sons FAQ should indicate intent in 9th edition here. 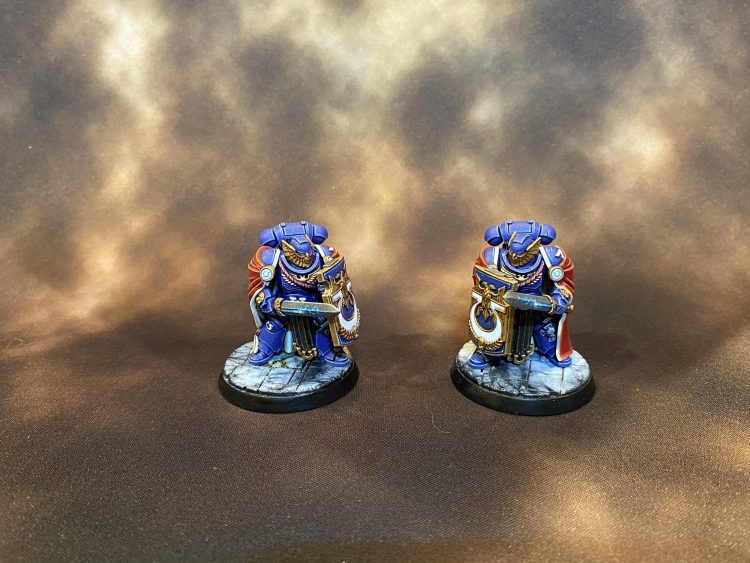 As if this rule wasn’t frustrating enough. We’re at a really weird place with which of these seemingly identical abilities have the Aura tag.

I still firmly hold the opinion that the tag is not what defines an aura. Being an ability that has an effect on a unit while they are within a certain range is the definition that I suggest is the one that matters. This precludes any abilities that last for a specific time regardless of staying within range, or abilities that select a singular unit rather than affecting all units within that range. Having this agreed on is important as all the 8th edition Auras are not tagged.

I still feel Body Guard in 9th Edition codexes meets the criteria of an aura, and that until specifically FAQed I would suggest they all be treated as Auras. Once again this ends up being on the players to resolve in the pregame discussion.

I’m going to preface this with a note that, to my understanding, the community is almost evenly split on this issue. We’re so close to the Open-Topped rules being “good” and consistent and it’s really just this last hurdle. I think even my colleagues at Goonhammer HQ are split on how this should be resolved. So what follows is my preferred interpretation, but I could be wrong.

I don’t think it does. it’s question I really was hoping the FAQ would cover but it might be something they’re saving for the next BIG FAQ (which I’m not expecting til January)

What I really want is point 9 of the Open-Topped transport rules clarifying.

Personally I think that the passengers don’t benefit, the modifier is worded in a way that leads to this conclusion in two ways in my opinion. I am very open to being wrong, and think I’m likely in the minority on this issue.

Trukk Boyz: A TRUKK BOYZ unit can disembark from a TRUKK even if that TRUKK has made a Normal Move this phase. While any TRUKK BOYZ units are embarked upon a TRUKK, each time that TRUKK model makes a ranged attack, add 1 to that attack’s hit roll.

The modifier applies each time the TRUKK model makes a ranged attack, so when you shoot with the units inside.

1) The TRUKK is not currently making a ranged attack, so there’s no modifiers active.

2) The units inside are not TRUKK models.

It seems point 9 mostly applies to defensive or enemy modifiers. Like if a ability that causes -1 to Hit is used on the TRUKK then it usually also affects the contents. Such as these examples.

NEUROWEB SYSTEM JAMMER
Use this Stratagem at the start of the enemy Shooting phase. Pick an enemy unit within 18″ of a BATTLESUIT COMMANDER from your army. Your opponent must subtract 1 from hit rolls made for that unit this phase.

ALPHA LEGION: HIDDEN IN PLAIN SIGHT
Your opponent must subtract 1 from hit rolls that target units with this trait if they are more than 12″ away.

These abilities are not “when making an attack” and don’t have any specific keywords the affected units must have.

Regarding Tau Stealth Suit’s camouflage rule – Does it mean that the model is always in cover, IE literally can’t be shot no matter what (as being in cover affects visibility) while in conceal order? Or does it not affect visibility, and is just for the sake of defense dice?

I’m very sure this is against the spirit of the rules, but can you run a stealth suit in the middle of the board in conceal, then conga line a bunch of dudes behind it, and so long as they’re in conceal they literally can’t be shot unless the second model in the conga line is completely visible (IE cover line does not cross the first model’s base)? – Franco

Thanks for my first Kill Team 2021 Question Franco! I’m going to split this up.

Stealth Suits – When can I shoot them?

it must not be in Cover. The model still has cover when give an Engage Order but as you identified cover doesn’t affect target eligibility when models have this order.

Can I hide models behind them?

The short answer is “yes, you can.” As much as it seems odd this is similar to gaining cover from being behind any other model. I do wonder if an FAQ might eventually remove this for Stealth Suits though, as they are mean to be invisible (though maybe it won’t maybe they remove the friendly models behind them with Tau Photoshop).