Ruleshammer: What Does “Within” Mean and How Does it Affect Cover?

Although we love Warhammer 40,000, the game’s complexity can be daunting, particularly for newer players. In Ruleshammer, we look at the nuances of the game’s rules and how they affect gameplay, clearing up potential issues and helping make sense of some of the game’s less common interactions. In today’s Ruleshammer, Rob “Vre’kais” Chilton is looking at the different uses of “within” in the rules for 40k and what that means in the game.

This article if Warhammer 40k 8th edition. Explanations for these concepts in Warhammer 40k 9th Edition can be found in the “Changes to Core for 9th” and the “Guide to Terrain in 9th” articles.

The Core Rules in Question

“Within” is perhaps the most liberally used word in the whole 40k rulebook, with many different uses. Let’s start by looking at a few rules that use it and how their uses differ.

Kustom Force Field: If this model is equipped with a kustom force field, friendly ORK units have a 5+ invulnerable save against attacks made with ranged weapons while they are wholly within 9″ of it.

Volley Fire: Models in <Sept> units within 6″ of any friendly <SEPT> Cadre Fireblades may fire an extra shot with pulse pistols, pulse carbines and pulse rifles when shooting at a target within half the weapon’s range.

From the Cover rules in Chapter Approved 2019 for Ruins

Broadly speaking, all of these rules and scenarios fit into one of three categories: 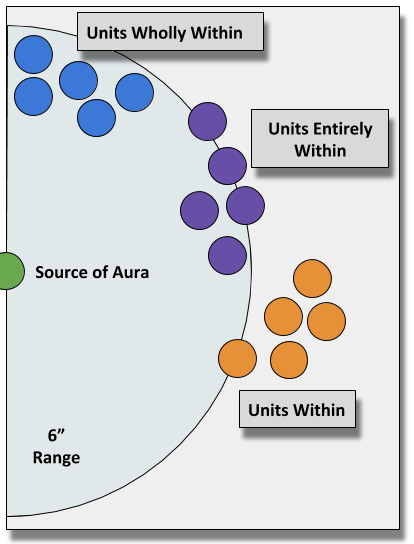 The keen eyed reader might have noticed some words extra in the Ruins rules though:

entirely on or within a ruin

In their infinite wisdom, Games Workshop are using a definition of word “within” that can seem counter intuitive. The easiest way to think of it that I’ve come across is that when you are measuring distances most people would not expect you to by default include the entirety of the two things; that is, the distance from London to New York is widely understood to mean “from where one of them ends, to where the other begins” wherever that line may be.

This runs counter to the other definition of “within”: To be encompassed by or inside of. How do we know that this is definitely what GW intends with its usage? Once again we look at the FAQs:

What do the FAQs say?

Q: Can you clarify what the difference is between ‘wholly within’ and ‘within’ for rules purposes?

A: If a rule says it affects models that are ‘wholly within’ then it only applies if every part of the model’s base (or hull) is within.

If a rule says it affects models that are ‘within’, however, then it applies so long as any part of the model’s base (or hull) is within.

If a rule says it affects units that are ‘wholly within’ then it only applies if every part of every model’s base (or hull) in that unit is within.

If a rule says it affects units that are ‘within’, however, then it applies so long as any part of any model’s base (or hull) in that unit is within.

If a rule says it affects units if every model in that unit is ‘within’ then applies so long as any part of every model’s base (or hull) is within.

Wait, where the heck did that “partially” come from??? This one word is the clearest proof of the fact that for cover in ruins, you need only overlap the area of the ruin “partially” to gain the benefit (assuming you pass the other criteria). This is why it’s beneficial to have ruins on a base to clearly define the area or, if the ruins are unbased, to have a discussion with your opponent about the area counting as cover before the game begins and during movement (there’s no rule against checking with your opponent to agree that you’ve moved to cover in case you want to change your move). Lets put all this together now using cover as an example (as it’s often not thought of as an aura when, based on the rules, it seems like GW thinks it should be).

What Counts as “In Cover?” 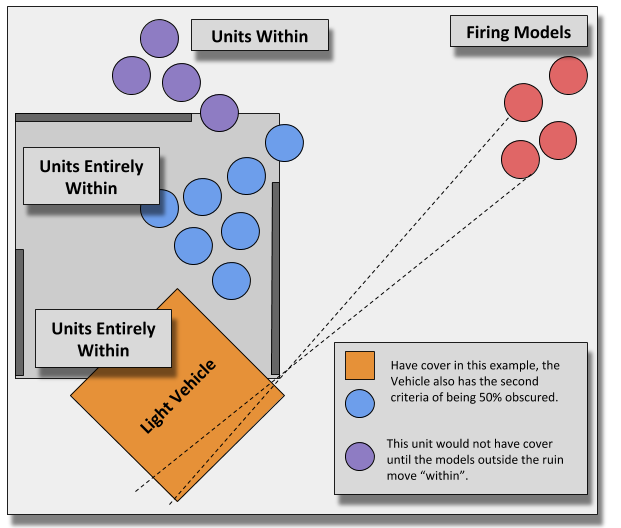 Fairly straightforward so far; remember though that with a lot of “to Hull” measuring, vehicles can be “partially within” cover by effectively just touching or overlapping part of the ruin. Getting 50% obscured is trickier and often only possible from a particular facing.

Before you go though, another FAQ intermission;

This is a direct result of the game rules being designed with attacks being “one at a time” as the default. It should be noted that cover is one of the few things that is constantly rechecked during a unit’s shooting, I’ll cover why range and LoS are not also affected in the same way in an upcoming article.