The Painter: Santeri “Tenteri” Sarkola
The Game: Warhammer Age of Sigmar
Points: In 3rd. edition over 4000 points. Now including 3 Gyrocopters and Irondrakes as allies.
Collecting Since: December 2019
Instagram: admiralgrudge

It was never grimdark for me. It’s the thought of taking big gulps of Bugmansson’s beer while bagpipes are playing in the background at the tavern. Swords clashing and arrows flying. Some bearded guy on a robe shooting fireballs from his staff (I heard some people call him… Tim?). You know how it is.

I started my Warhammer hobby at around age of 14. I collected High Elves and my proudest piece of the army was my Imrik on his dragon Minaithnir. Then came the Wood Elves and after that there was a big hiatus. Tried to start again with Wood Elves in 9th edition and even started to collect Lizardmen with a Stegadon. Then I took a break and sold everything. I never actually played with my armies! It was all about collecting and painting because I never felt ready to play with them.

Fast forward to December 2019. I’m having a terrible spinal disc herniation. Now I have plenty of free time at my disposal because I can’t work. I go to my FLGS and see something peculiar on the Warhammer shelves. “That is one sweet looking boat. And are there dwarfs inside that boat? Hot damn that is one cool looking dwarf army. Age of Sigmar? Should I start again? Maybe this time I will finally get to actually play my army.”

“Admiral Halvak, we have inspected the Aether Refinery and all the clues seem to point out that it belonged to Barak-Mhornar. Whatever happened here it looks like they left in a hurry.”

And here we are. Plenty of mad flying duardins on their boats looking for treasures from the Crystal Glaciers. That was the theme with my KO army.

“With the crew being lost in the blizzard, Admiral Halvak had to wait for the storm to settle in an ancient monastery. Halvak sensed that he was not alone here.”

Meet Admiral Halvak. He is one stubborn duardin. He thinks that in Crystal Glaciers lies hidden treasures that are buried hundreds of meters deep inside the ice. Ice so hard that you could carve hammers from it. The wind is so deadly that you need a helmet to withstand the ice shards flying in the air. It’s like razor blades to your skin! Other skyfarers think he is mad. Some Admirals even think he is stubborn! But where there is no competition there is a bigger stash to be salvaged. Luckily he has a loyal crew willing to go the extra mile to the deep end of that god forsaken place.

I wanted to create a realistic ice theme for my Kharadrons and didn’t want to just slap Valhallan Blizzard on the bases and call it a day. I made my own ice from resin and made a nice working process with Mordant Earth. I also found nice decorative glass pieces from a flea market to be used on the bases of my boats. Lots of variety and experimentation.

Remember ice and snow aren’t just plain colors of blue and white. They have a whole spectrum of colors so keep that in mind if you want to create more depth to your winter terrain or bases.

Meet Ironclad “Frostbite”. She was the reason I got this all started again and I wanted to make it look as good as I could. The Ironclad’s flying stand that comes in GW’s box is just terrible. For a Gunhauler I can live with that but as for a heavy model like Ironclad? No way.

For that reason almost everyone in the KO community comes up with different ideas for a flying stand. Mine was to make it as sturdy as possible while looking great. I went with a 5mm metal rod that I screwed to the base and inside the Ironclad.

The statue was from a Timeworn ruins box. Someone on the internet gave me the suggestion that I should green stuff an anchor to the rod and that was an excellent idea! Now it looks like the boat is floating in the air. I attached one Skywarden from Thundrik’s Profiteers box to the Ironclad’s endrin with a thin metal rod and hid it with a cotton. Now it looks like it’s flying above the boat, guarding it.

I did the same with my Frigates. Made anchors from green stuff and added ruins. I like the Thundriks Profiteers models scouting at the bases. They bring more context to the world where the ship is flying. I was never interested in using them in Underworlds so they suit me more as decoration on the boats.

Even though I’m satisfied with how my Frigates turned out, I still like my Ironclad and Gunhaulers most. Ironclad being the big mean centerpiece and Gunhaulers protecting it and providing scouting on the table.

I experimented with my final KO models with a Green Stuff Worlds Liquid Frost. It has a nice effect on the base but I wouldn’t use it in every base and model. It works best when it brings variety in the army. 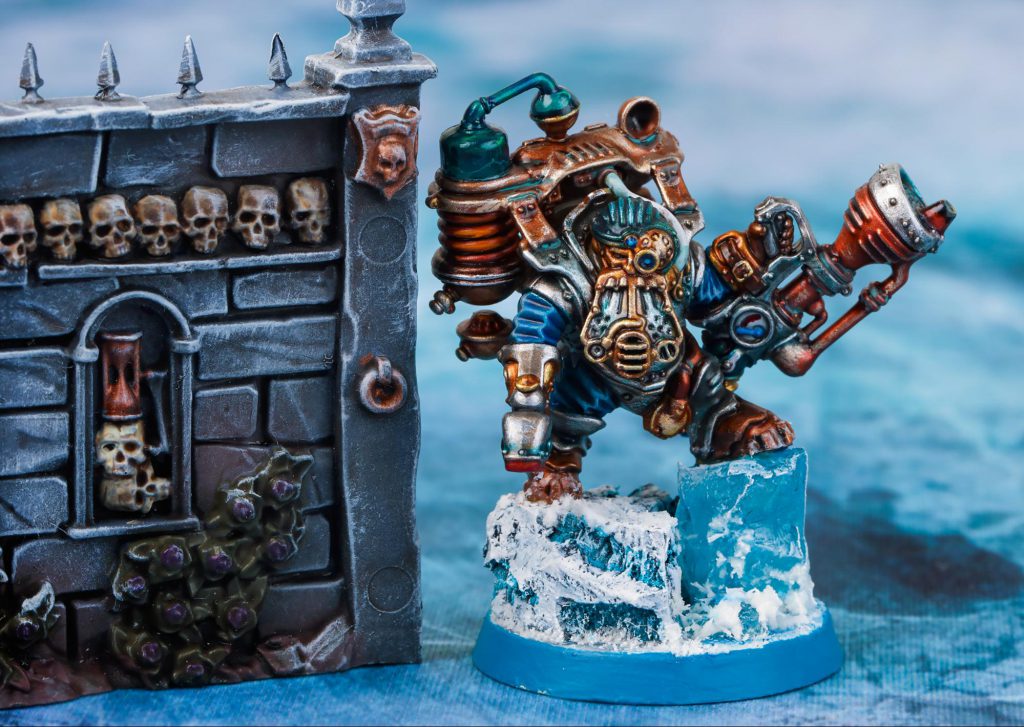 Bjorgen smelled Aethergold seams close by but he also noticed a different smell. This one reeked like it had been laying in the ground for ages covered in its own guts and blood. Credit: Santeri “Tenteri” Sarkola

What’s the most useful thing that I learned with Kharadrons? Doing metals well. I learned that my best gold job is done with base colour Retributor Armour washed first with Seraphim Sepia, then with Reikland Fleshshade and lastly Agrax. Highlight that with Golden Griffon and you’re good to go.

And now I’ve finally got to play actual games with my miniatures! I found a great gaming club full of nice people to play with and it’s going great. I’m now even organizing tournaments! What a time to be a Warhammer hobbyist.

After completing a sky fleet full of small grumping duardins what do I want to collect next?

They big. They angry. They smash. I love these guys.

I hope you enjoyed my little (and big) fellas! Have a great time in the Broken Realms.

You can follow Santeri’s work on Instagram here: admiralgrudge. Have any questions or comments? Drop us a note in the comments below or email us at contact@goonhammer.com.