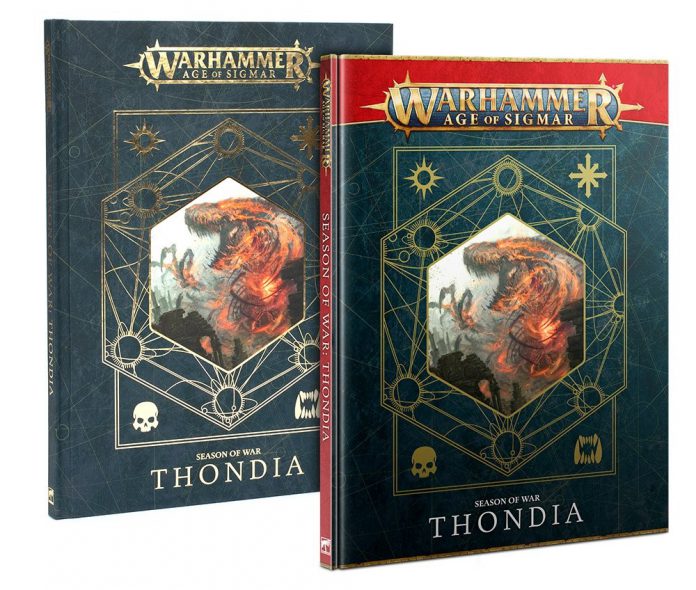 Goonhammer was given a free copy of Season of War: Thondia for review purposes.

Open Play, the neglected cousin of Age of Sigmar that Games Workshop isn’t quite sure what they want to do with yet, but appear to be getting there. As it currently stands currently in 3rd edition, Open Play is like a much looser Matched Play. Players agree on a point value and muster their forces. There are two key differences: First, Open doesn’t have a minimum or maximum unit type requirement. You want a list with no Heroes? Or All Monsters, regardless of subfaction abilities? The world is yours.

The other major difference is that missions are randomly generated from a series of tables. From map layout, to mission objective to little quirks that can affect units on the battlefield no two matches are ever the same.

Worth noting, the realm rules Monstrous Denizens and Mysterious Terrain are ignored here, unless told otherwise, which helps streamline the games and gives less to keep track of.

As stated above, Open Play is pretty overlooked because most of the time people would rather dive into Matched Play or level up their warband in Path to Glory, but it is a test bed for some ideas that might be too wild for matched and it’s still worth exploring them to see what’s new in here.

The map tables are identical copies of those in the core rules, so we can skip past that and jump into Victory Conditions, the criteria to “win” at the mission. Three of them are identical to the core rules: Field of Glory, which requires a player to hold all 3 objectives after 5 rounds, Loot and Plunder which is similar to the matched play mission Feral Foray, asking both players to try and burn objectives on their opponent’s side of the field and Arcane Prize which is a sort of tug of war by both players dragging a single objective into their deployment, the objective has a unique property based on a d6 table.

The other 2 missions are similar to but not exactly like War of Attrition from the core rules, which is a kill point mission. Monstrous Takeover counts Monsters as worth double to reflect the environment of Ghur. Amber Bones is similarly a kill point mission but requires the Megadroth Remains terrain feature given the Wellspring of Primoridal Energy terrain feature, the one that gives a free spell in the form of +2 to run and charge. I confess I think this one feels a bit cynical, trying to sell you on the terrain box launched aside this book, not a huge fan given how close it is to an already core mission.

The final one is also a modified core mission. Savage Spearhead is basically just Invasion but only a minor victory if there a monster of yours in the enemy’s deployment. Sort of a weak disincentive, you won the match who cares by how little? This isn’t comp play.

Really down on these Victory conditions, half are literally just core mission and the other half are barely modified versions of Core. It comes off as pressing themselves for padding and if you do play Open you probably won’t have your mind blown by any of these.

Twists are additional rules that affect both players to add a little bit of spice beyond the mission itself. To their credit these are original and don’t (directly) repeat. Hinterlands requires you to go roll on the core table but the rest are new. Hungering Animus lets you add 2 Mysterious Terrain features (remember, by default there arent any), one for each player. Similarly, Beasts of Ghur lets players use the Monstrous Denizens rule, while Territory of Beasts uses two Monstrous Denizens.

The last 2 are genuinely interesting. Primal Violence asks players to roll a die at the end of the combat phase, and on a 6 do it again. Reckless Aggression causes a Mortal Wound to any unit that is within 12″ of an enemy unit and doesn’t charge. Both of these will likely lead to far bloodier games and be more interesting as a result.

As opposed to twists, which affect both players for the whole game, Ruses are abilities you can keep in your back pocket until the approriate time. Both players get to roll foe one. Again half of them are repeats from the core book: (Ambush, Reinforcements and Revenge) and 3 are new.

Return of the Beast let’s you set up a Monster or Hero in reserve and then outflank with them in the first or second round, ideal for keeping one safe from that initial ranged phase. Fury of Ghur is potentially exceedingly powerful, letting a Hero perform one extra Heroic action or 1 extra monstrous rampage once per battle. Finally, Bring it Down, not to be confused with the Battle Tactic of the same name, gives you an extra command point when you fell a beast.

The new Ruses are pretty interesting and could be powerful if you roll them on the table. Since you don’t get to pick it’s hard to say a “best” one but if you get one of the new ones you’ll probably be happy with it, unless you get Bring it Down and they have no monsters. But why are you playing in Thondia without them?

The two new ones are solid, though not terribly exciting. I do think removing Plague from the original was better, we didnt need 2 D3 mortal wounds options on the table. Mobile mysterious terrain is also an interesting concept, though it doesn’t fix mysterious terrain being a bit mediocre.

Overall it’s…Open Play. If you like Open Play and want some more variety than this is it. Open Play is solid for quicker or teaching games but it doesn’t see much else. It still needs a certain something to make it stand out from being Matched’s baby brother. Hopefully one day it’ll get there but unless you’re already playing it I don’t think you’ll be sold here.

Next up is Narrative Play, which I assure you is a far more exciting proposition.

If you have any comments or questions leave one down below or email us at contact@goonhammer.com.