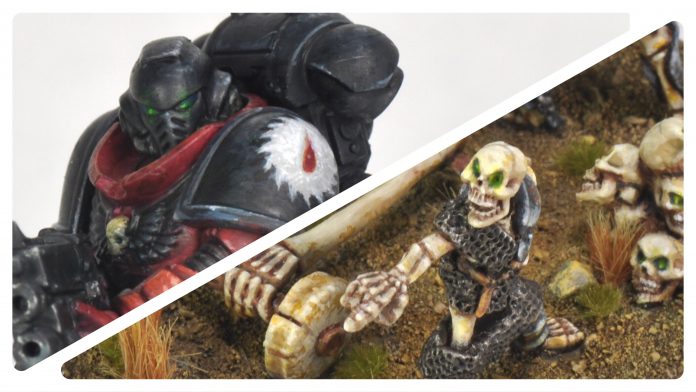 2021 is done for and it’s time to look back at this year’s hobby journey. I feel pretty good about my output, lots of enjoyable painting and some kitbash deep dives. If there was a theme it might be this: Skeletons, vampires, and wizards.

Starting out the year I painted this Flesh Tearers Space Marine. It was a one off for our How to Paint Everything: Flesh Tearers article. I really like this color scheme and could see doing more if I were to start another Space Marine force.

These were painted up for a friend and done relatively quickly, base colors and a few simple highlight, then picking out an area of focus for more detail. The objective I like to call “the dentist” received more attention, trying out some cast light reflections on the metal surfaces.

I did this little diorama for a contest on Instagram, run by @paula_she_creature ( A great follow for oldhammer stuff and bi-monthly contests.) It’s one of the late 90’s night goblin fanatics battling a vampire counts skeleton. It was sort of inspired by the goofy little margin illustrations in the 5th edition Warhammer Fantasy Battle rulebook. The mushrooms were sculpted out of green stuff. This was my first ever goblin. There are a lot of great painters out there who work reds into their goblin faces and noses, so I gave that a try. Overall a really fun project.

Brain in Jar and Console Objectives

The last of the 40k objectives for this set. These were fun, doing a kind of NMM black on the metal and red screens. I used brown and burnt orange to get the rust effects. The tiled bases are plasticard scored with a Tamiya panel liner scribe.

This month also saw the completion of three Armored Skeletons. These are some of my favorite skeleton sculpts. The shields were a lot of fun, I had brainstormed out a list of shield icon ideas with various themes the previous fall.

This one is another project for an Instagram contest, this one hosted by @totally_not_panicking (another pro-follow for their staggering amount of kitbashing). I based this build on Yvraine. The idea was some kind of biomechanical cult matriarch, along the lines of genestealer cults. At some point I may fill out the war band with GSC neophytes kit bashed with skeleton warriors. It was something that has been in the back of my head for a while. Seeing some other kitbashes of Yvraine in a blanchitsu style brought my attention to the regular segmented lines on her that reminded me of H.R. Giger’s work. With this I wanted to push that effect to the max. Using bits from the Bonereapers range and some skeletons parts helped to amplify the effect. Greenstuff was also used to build out the back of the head and to add ridges crossing the lines to make them look more biological than Aeldari decoration.

These two skeletons are Aly Morrison sculpts from the late 80’s citadel range. These two have unique elements that are especially interesting. The sword and sickle combination and the style of the weapons are really cool. “The Wanderer” almost tells a story. A traveling skeleton with a staff and a bag of bones. What does he do, where did he come from?

The old Lichemaster himself. This one is an update of the model I had purchased and painted in the late 90’s as a teen. Revisiting this model was a bit of a nostalgia trip, big ol hands in the classic citadel tradition. For his Cloak of Mists and Shadows I went for a foggy forest effect.

The idea for this one was to build a vampire for a Mordheim warband. I don’t have a group that plays, but it makes for a good hobby prompt. It’s based on the Pious Vorne model. For the painting scheme I was thinking about warm directional light from the models right side, and cool light from its left. Maybe lantern light on a moonlit night. There is a Hobby Heresy article on the kit bash process here.

Slug Wizard Spring!? This is another model done for and Instagram event, this time hosted by @ibrewtiny (lots of great kitbashing and general weirdness here too!). I kept seeing people’s slug wizards pop up in my feed and I couldn’t resist. This is based on a metal Empire Mounted Grey Wizard, with a slug body sculpted on. I sawed off his sword and staff to replace them with the owl and branch.

Early in the year I picked up enough models to build 2000 points of a 6th Edition Hordes of Chaos army. This mounted sorcerer is one of my favorites out of the range. I did some minor greenstuff work to add some mail to the legs and around the bottom of neck, and then some fur to the back of it and around the rider. Just enough to blend the generic barded horse with the unique horse head he came with.

This is an early 80’s Citadel lead skeleton. It’s unique look really drew me to it. It’s integral lead base had its name ‘skeleton’ on it, so I left enough of it showing through the sand to read.

I picked up a box of Cultist of the Abyss to fill out my Helot Cult. (More on them here.) This is a really fantastic kit. Very dynamic poses on them. Their face are replaced with citadel skulls and Kairic Acolytes.

Another goblin. Very interesting model, done for a discord paint along. Leaned into earth tones and naturalistic coloring for this one.

I painted Be’lakor himself for a friend, as close to box art as possible (without spending 50+ hours on it![Okay, it did take half that]). He was quite a fun model to paint. There is a How to Paint Everything article on my method here.

These were done for a Halloween How to Paint Everything article, link here. These may be the first non-Games Workshop Miniatures that I’ve painted! A fun set of minis to work on.

This is another rehab from my early Undead collection, done for #deadcember. The original had the skeletons and skulls each on a separate base, and nothing for the catapult. Putting them all together on a 70mm base helped to make them all feel like one model. The basing was done with Agrax around the edges and Seraphim Sepia toward the middle, then dry brushed with shades of light brown. The bigger rocks were Basalt Grey, dry brushed the same as the rest of the base. This is the first time I’ve done a base rim with Vallejo Game Color Beastly Brown, and I like the effect.

This year’s painting consisted of following a lot of whims and flights of fancy, as well as painting for others. For the next year I plan on focusing on getting 2000 points of newly acquired Soulblight Gravelords painted and maybe even playing some games. My output is pretty slow, so it will be important to pick a scheme with a quick turn around, similar to the chaos cultists I painted this summer. I managed to get six of them done in little over a week, so I will see where that takes me. Here’s to lots of painting in the coming year!