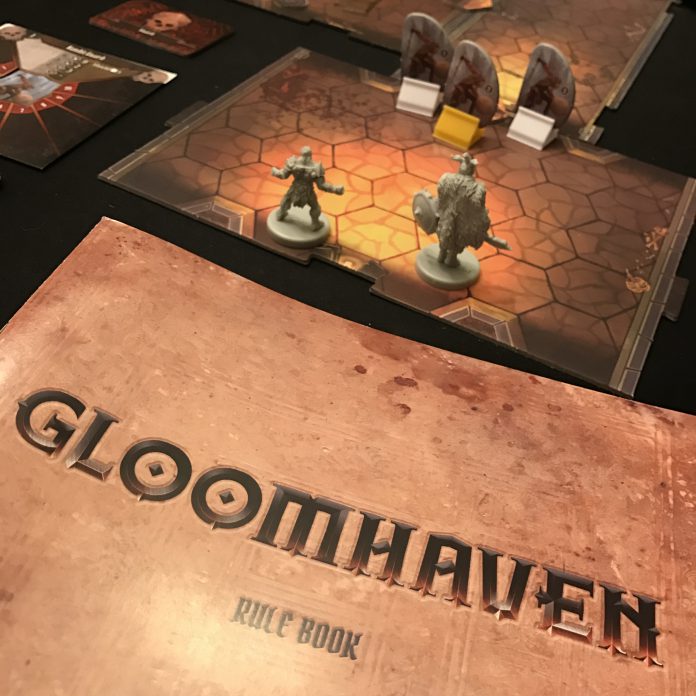 In June of 2017 Games Workshop released the 8th Edition of Warhammer 40k. This was a dramatic release, resetting the entire game with minimal carryover from 7th edition. While 8th changed the trajectory of my tabletop gaming life, only 4 months earlier a massive game landed on my table that was no less groundbreaking: Gloomhaven.

This was—and in my opinion still is—one of the most astonishing board game releases of the modern era. Designer Isaac Childres was not yet the household name he has become. At the time his only game was Forge War, a well-reviewed but relatively obscure Euro game currently sitting ~1500 on the BoardGameGeek rankings. His success with Forge War led to to use Kickstarter to self-publish a new game he called Gloomhaven, advertising a sprawling fantasy adventure and a box jammed full with maps, board pieces, miniatures, cards, and tokens. It successfully funded at just under $400,000.

Hype built during production, as gamers began to grapple with just how much stuff Isaac was packing into a box he charged only $80 for (retail price would eventually rise to $150). Boasting an expected 150+ hours of fantasy campaigning, legacy mechanisms, miniatures, varied monster types, and a branching story path providing replayability should you manage to actually complete a campaign, it’s no mystery why so many folks were curious—and apprehensive—about this release. Accordingly, I reached out back in 2017 and Isaac was kind enough to provide me a review copy.

Gloomhaven catapulted up the rankings taking the #1 spot on BoardGameGeek, a position it still holds. Demand outstripped supply immediately and a Kickstarter campaign to fund a second printing would close at nearly $4,000,000.

As ridiculous as it sounds, I think it’s entirely possible Gloomhaven isn’t rated highly enough. Combat runs via an innovative system of combat cards, with top and bottom halves. Each round you’ll choose two cards and execute the top of one and the bottom of the other. The use of cards means complex directives can exist, allowing some classes to leap through the air and land crushing area of effect attacks while others summon pets, control enemy actions, cast elemental fireballs, or turn invisible and slit throats.

The campaign sprawls, with a different card-based system allowing for random encounters to reflect actions your party has taken. Combat cards and the board itself are upgraded via legacy stickers, heroes retire, personal quests unlock new classes (hidden in boxes at the start), and more. There’s just so much stuff in this box it’s a marvel it ever happened let alone is this damn good. It is, still, one of the best fantasy dungeon crawlers on the market and I expect the sequel, Frosthaven, to improve upon it. Oh, yeah…Frosthaven funded to the tune of $14,000,000.

The biggest complaint about Gloomhaven comes as a byproduct of that size. It can be a bear to manipulate. The gameplay is great. The actual physical act of play can be hard. Decks to shuffle, boards to manage, 30+ tiles to be flipped and arranged for every dungeon, monster standees, monster health trackers, status tokens, combat decks, it goes on and on and on. Almost immediately upon release came myriad fan made tools to automate various parts of the physical execution, the labor of playing Gloomhaven. Along with those tools came the question: Shouldn’t this just be a video game?

So in 2019, two years after release, Dire Wolf Digital released Gloomhaven: Digital on Steam. There are no changes to the core structure. The digital version is a faithful recreation of the tabletop rules while offloading all the upkeep and management to your computer.

The gains are tremendous. In addition to playing cards, combat involves drawing cards from individual player decks. A separate shared deck exists for all the monsters. Health and status effects are tracked individually per monster and when you’ve got a room with 6 or more it gets clunky. The digital game takes care of it.

While I’ve got some minor gripes about the UI and how hard it can be to suss out some rule specifics, this is a welcome improvement. It can take 20-60 minutes just to set up Gloomhaven with another 20 minutes of reset and rebuild between each adventure. In order to pack up my box I have 6 pictures showing the precise way I have to organize all the contents in various layers to make everything fit.

The game handles all of this for you. Load up the software and you’re ready to embark on an adventure. All the stuff that you would use decks of cards for (and again, there are lots) are invisible. The game makes sure you don’t forget anything and makes sure you don’t miss any triggers or confuse statuses. It’s more unforgiving, what with the lack of an undo button, but ultimately it’s a net upgrade almost across the board.

Unfortunately, Gloomhaven loses a little something in the translation. The first is, of course, the spectacle. There is something awesome about lugging a massive box out and taking over your table for weeks on end (I find it easier to simply not put it away and string a few sessions together). Having the city board set up on one end of the table with dungeons on the other really hammers home the impressive scope.

I also find it harder to plan my turns when I don’t have a handful of cards. The UI only lets you look at one card at a time, and you can’t reorder or organize your hand if you need to. This makes planning on off turns harder, and I find it harder to remember what I have left. It is especially noticeable when running multiple characters solo. I can handle 3 maybe 4 characters by myself playing the tabletop game but my brain turns to mush at anything more than 2 when playing on the computer.

The bigger, and more important loss, primarily comes via the Legacy elements. Gloomhaven is a game with permanence. Quest lines will close off depending on the choices you make. Stickers are added to the board, cards are ripped in half, boxes are checked, and so on. There is no emotional weight to this on the computer.

It also obfuscates some of these elements creating different incentives. In the physical version there is a long row of check boxes running across the bottom of the board that are filled in when you donate money to the Great Tree. This track makes clear that there are benefits to be had by doing this repeatedly; it’s nearly invisible on the compute game.

Additionally, there are piles of envelopes and small tuckboxes with mysterious symbols that fill the large Gloomhaven board game box. These serve as small incentives, constantly nudging you along a path of discovery. The presentation of class unlocks in the digital version carries none of the emotional pull that comes from selecting a personal quest with a symbol on it knowing that there is a corresponding secret box waiting for you.

Something gets lost in this translation. Gloomhaven is a living city with a living world. You are supposed to get attached to the city, not your character. Your characters will grow, get stronger, and then retire to become NPC’s as you continue your quest with a new one. I have found a much greater attachment to my character in the digital version and a greater disconnect from the city which I believe is due to the presentation and medium.

To be clear, the gameplay of Gloomhaven is no less exciting, no less innovative, and no less rewarding on the computer. Despite my gripes, I’m certain the ease of play via my PC will mean I play digital Gloomhaven 5x as often as physical. There is, however, a feeling of loss. Play is easier, yes, but the campaign is a little duller and not as rich. It’s like a 5 Guys burger vs sitting down at Chicago’s Au Cheval.

After my first play I was convinced I’d never play the physical version again. After my third I wasn’t so sure. Or at least, I’m now more excited for my buddy’s copy of Frosthaven to arrive so we can dig into a new adventure without the temptation for fast food.