The NCAA Men’s March Madness tournament is a 68-team tournament played every March, culminating in the crowning of the Men’s College Basketball Championship. It is a single-elimination tournament that takes place across the country; early rounds will see up to 4 games being played simultaneously. For die-hard college basketball fans it is like Christmas. It has not always been 68 teams, however.

Beginning in 1985 the NCAA Tournament expanded to 64 teams. Participants are divided into teams that receive “automatic bids” and teams that received “at-large” bids. The winners of the 32 Conference Tournaments are given automatic bids, while the remaining bids are given to teams based on season performance. For the teams in many conferences the only hope to go to the big dance is winning their tournament.

In 2000, the number of conferences expanded and rather than cut an “at large” bid, the NCAA created what became known as a “play-in” game. The two lowest seeded teams (always automatic bid winners) would play in a game a few days ahead of the start of the main tournament. This game became a popular appetizer, and so the NCAA expanded the field to 68 teams in their quest to fill their coffers with as much money as possible, and support the student-athlete or whatever they claim their mission to be. Now, each region has two teams vying for a spot in the “main” bracket; a couple teams compete for a 16 seed and a couple teams who squeaked in with at-large bids compete for an 11-seed (give or take a seed).

Our exploration of the Spiel de Jahres winners begins with the Northeast Region’s “Play-In Games”. These award winners certainly deserved their awards at the time, however it’s unlikely that they’ll take out any of the powerhouses. You never know, however, if there is a UMBC lurking…

Yet another game that has had a couple of titles over the years, Um Reifenbreite is German for “by the width of a tire”. In this game of bicycle road racing players each control a team of 4 cyclists. As is appropriate, the winner is the person whose team scores the most points overall. While you may have the overall race winner who earned the most individual points, you need to make sure you haven’t overplayed your hand of cards on that one racer.

Play combines dice with a hand of one-shot cards and takes place across a series of rounds. While a round ends when all riders have moved, play isn’t necessarily sequential because of the way riders can draft. For normal movement, a player rolls some dice and moves that many spaces. Your hand of energy cards can be played to swap a die for the value of the card. This gives you a bit of control over movement. Instead of normal movement, your rider can draft. This involves simply following along behind when the rider in front of you moves and can lead to chains of riders drafting along.

Drafting adds some interesting decisions and again helps mitigate luck. If your rider is out in front you’ll have no choice but to accept the whims of the dice, but those riders in the peloton have the option of taking advantage of someone else’s good roll. You can opt to say that your rider is “breaking away” when you use an energy card, but that is not always beneficial. Advanced rules (which are highly recommended) add movement tweaks to simulate uphill/downhill and other road conditions, and even introduce an option to have your rider cheat by grabbing a car and hitching along for the ride. A deck of photograph cards make this a risky proposition.

Another early Spiel winner that is now out of print, Um Reifenbreite is going to require you to hit Ebay if you want to check it out. Flamme Rouge, a game clearly inspired by Um Reifenbreite, is readily available and an excellent substitute.

Klaus Teuber has four games in the SdJ tournament bracket though you’d be forgiven for not knowing Wacky Wacky West was one of them. For one, it was originally released in Germany as Drunter und Drüber. Also? Mr. Teuber is the gentleman behind the biggest selling SdJ-winning title of all time—Catan, a top tourney seed that tends to overshadow his other games in the field.

Wacky Wacky West shares the hidden identity game mechanic seen in Heimlich & Co. but replaces roll-and-move with tile placement and simultaneous player voting. Players lay tiles to expand and build up a scrub-and-scree desert town into a more modern burg. The board is a 10-square by 15-square grid dotted with six different building types (five of each type numbered from 1-5 points) and 17 zero-point outhouses. Players secretly “own” one of the six point-scoring building types and through tile placement try to cover their opponents’ buildings while staving off the destruction of their own buildings in the name of progress (and points).

When a player attempts to place a tile that covers any (neutral & non-scoring) outhouse, all players must vote to approve this tile placement. Players are each given a set of one-use-only vote cards: single-, double-, or triple-weighted yes/no votes, an “undecided” card, and a joker card which counts as a double “yes” or double “no” but lets you decide which after you see how everyone else voted. Voting rounds are a hand of poker at the saloon; it’s when you suss out which buildings mean the most to which players. The game ends when no players can place a tile. Any buildings still visible on the board score their values to determine the winner.

Like most SdJ winners Wacky Wacky West is easy to learn, accessible to newcomers, and nails the randomness and player conflict sweet spots to serve up a social, party-game atmosphere that’s over in 30 minutes. The artwork is cartoon-cute like the Mad Magazine version of Deadwood – very fitting for a game that showcases raucously passionate player arguments over whether to save or destroy an outhouse in the middle of the desert. Three decades later Wacky Wacky West is comfort food you used to eat every day in your youth, but now skip over as your tastes have become more sophisticated. Like a Twinkie it’s a snack you may never seek out yourself, but would likely not turn down if someone else offered it to you. In fact, after writing and remembering this as the fast and fun filler it is, I’m suddenly craving both a Twinkie and another game of Wacky Wacky West. 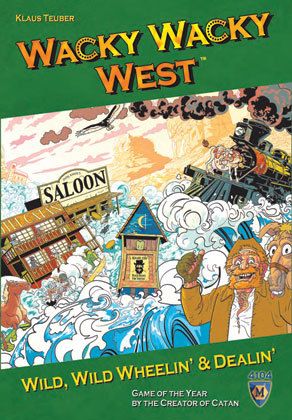 This is a very tough decision, perhaps the closest of the Play-In Games. The cycling elements are very well represented in Um Reifenbreite and the two levels of advanced rules give it legs. However, there is only so much you can do with roll-and-move; we certainly aren’t dice averse at Goonhammer dot warhammer forty thousand dot com but old school roll-and-move doesn’t cut it anymore. Wacky Wacky West’s above-the-table bluffing and vote wrangling never goes out of style, however. Also look at that cowboy and his horse. Just look at them. Of course they win.

Another one of those Klaus Teuber joints! I’ve only played this game once, about 6 years ago at a board game convention—my first one ever I’ve attended in-person. Back then I was fairly new to the hobby; I brought my small collection and knowledge, eager for anything that stood out. And for a game about art, auctions, thieves, and fractions on a board, Hoity Toity stood very much out.

In Hoity Toity, you vie for the best collection of valuables acquired through legal or illegal means. You can either pay for valuables or steal them with thieves. As you grow your collection you’ll start to “exhibit” them, granting you movement around the board. This is important, as the winner is whoever is farthest around the board and near the dinner table near the end of the track. So, tending to your collections and exhibiting them at just the right times will gradually progress you towards the end. That’s where the fractions threw me off.

Past me still believes they’re fractions when, in fact, they indicate movement spaces for 1st- and 2nd-place exhibitions. So, something that read “4/2” isn’t an elaborate way to say “2,” but instead meant that the best exhibit awarded the player 4 movement, while 2nd place was awarded 2 spaces.

Despite the odd fractions, Hoity Toity is a whimsical set collection game with the right amount of auction and take-that gameplay that made every choice, no matter how small, very intrinsically important overall. It stood out to me six years ago, and it still stands out in my memory today. While Hoity Toity has gone through a number of reprints and name changes, it is unfortunately out of print today.

Special thanks to Willie H. for contributing the Hoity Toity write up.

The 1988 Spiel des Jahres winner, Barbarossa, is a family/party game of a sort that for a long time didn’t figure prominently in Spiel des Jahres nominations or wins but which has recently seen an uptick.

Similar in the broad strokes to family/party games like Dixit, Barbarossa is a guessing and deduction game in which players create objects based on a single, specific word, from modeling clay. Once the objects have been formed, game play proceeds person to person in which a player moves around the board either by rolling a die or spending gems to choose where they go. Spaces on the board have different actions, granting victory points or giving the player an opportunity to do a number of things to determine their opponents’ objects. The board spaces might let you ask a question about the clay figurine or ask a letter in the object’s name or make a guess as to what it is. Guesses are made in secret. If you guess correctly, you put a stick in the object and score points. Final scoring is based on how many sticks are in your object. Too few or too many and you lose points. The trick is finding the balance.

Barbarossa was designed by Klaus Teuber [Damn Klaus, leave some awards for everyone else], most famously known as the designer of Catan, who would go on to win multiple Spiel des Jahres awards in the earlier days of the award. In Barbarossa, he envisaged what would come to be a classic mechanic that would be deployed over and over again in other, also excellent games.

No but seriously, we’re giving it Hoity Toity here. Art crimes are cool crimes and Goonhammer supports doing cool crimes [Editors Note: Our lawyer has informed me that our official stance is “Do NOT do crimes, even cool ones”].