Imperium 26 is the Tech Priest Dominus issue. It’s chockablock full of Tech Priest Dominus. *Slaps magazine cover* this baby can fit so many Tech Priests Dominus in it. As you will see from the fine, fine work of my Goonhammer compatriots, the Tech Priest Dominus is an absolutely beautiful model. I have the distinct memory of an interview with Jes Goodwin saying it was his final hand-sculpted miniature but a morning’s worth of Googling has yet to turn up an external source to confirm this memory of mine. Maybe it’s true. Maybe it happened in one of my few dreams where I am not late for work at my old brewery job, but it’s in my childhood living room. Either way, dear reader, you are in for a sumptuous treat.

After detailing all of the wackadoo wonders of war that a Tech Priest Dominus is armed with, we have a delightful little battle record where we can figure out what our new friend is all about. Personally, I feel like Mechanicus characters are weird enough that they shouldn’t have such a standardized loadout, but it’s a cool model so who gives a toot.

Kyra Ryze wasn’t titled Explorator-Superior for nothing. As the head of xir explorator fleet in [DATE NOT FOUND], it was xe who claimed credit for discovering Derek’s Mom’s Dining Table IV. Xe cut a veritable path through the stars with the blade of Noctis Destructus, and lit the way with the phosphor blasts of Magna Steriliser. On Derek’s Mom’s Dining Table IV Kyra made xir greatest discovery yet; the artifact vulkite blaster Ionic Pistol. That the weapon wasn’t actually a pistol was unimportant; the title had been given to it at some point in history, and in the Adeptus Mechanicus, the past was always to be venerated. That Valfurion Siraxus, the Master of Automatons, had the exact same spread of weapons with their own unique titles didn’t matter to Kyra. Valfurion had a slightly different hat, so even in the most desperate combat encounters, the two of them would not be mistaken by their Imperial comrades.

One thing I’m particularly delighted about is just how weird the Adeptus Mechanicus are, and how eager the writers are to convey that in the text. It’s spelled out in no uncertain terms that these folks who take the role of mechanics and manufacturers are biomechanical monsters with titles like Grand Parasite and Monitor Melevolus. What I really love is that despite their desire to excise their weak flesh in exchange for the strength of the machine, they still suffer the same human faults of ego and a hunger for power. A Tech Priest Dominus is literally addicted to war, even if their whole body is mechanical and their brain is kept alive inside a jar like Abby Normal. Even the in-universe quote by Inquisitor Lhorcus Phrect is like “yo these folks are weird as hell but we need em around so whatever” as they turn a blind eye to what is, to some, heresy.

Despite the photographs by my (intelligent, kind, good looking) compatriots here on Goonhammer dot com, the Tech Priest Dominus does come with a second head option. Both are bangers, and the two are the only options available on this kit. For a character you’re unlikely to have more than one of, that’s fine.

The instructions are detailed, clearly spelling out all the difficult, fiddly joins that make up this model. They encourage patience and careful assembly, which is absolutely necessary for a model this finnicky with contact points this small.

The painting guide is comprehensive, focusing on the Dominus but also looping in the Skitarii Rangers from a few issues back. It mostly walks us through the basecoat, shade, and some highlighting and relayering on each of these models, even calling out details as specific as the differences between Skitarii and Space Marine purity seals. The hot tip they give the reader is to change the paint water between metallics and non-metallic paints. I learned this the hard way, spoiling a pot or two of old Badab Black wash by using a brush that been rinsed in tinsel-tinted Boltgun Metal-colored water. It’s the reason I save all my metallic basecoats for their own step in a paint process, as changing water too often is kind of a pain. 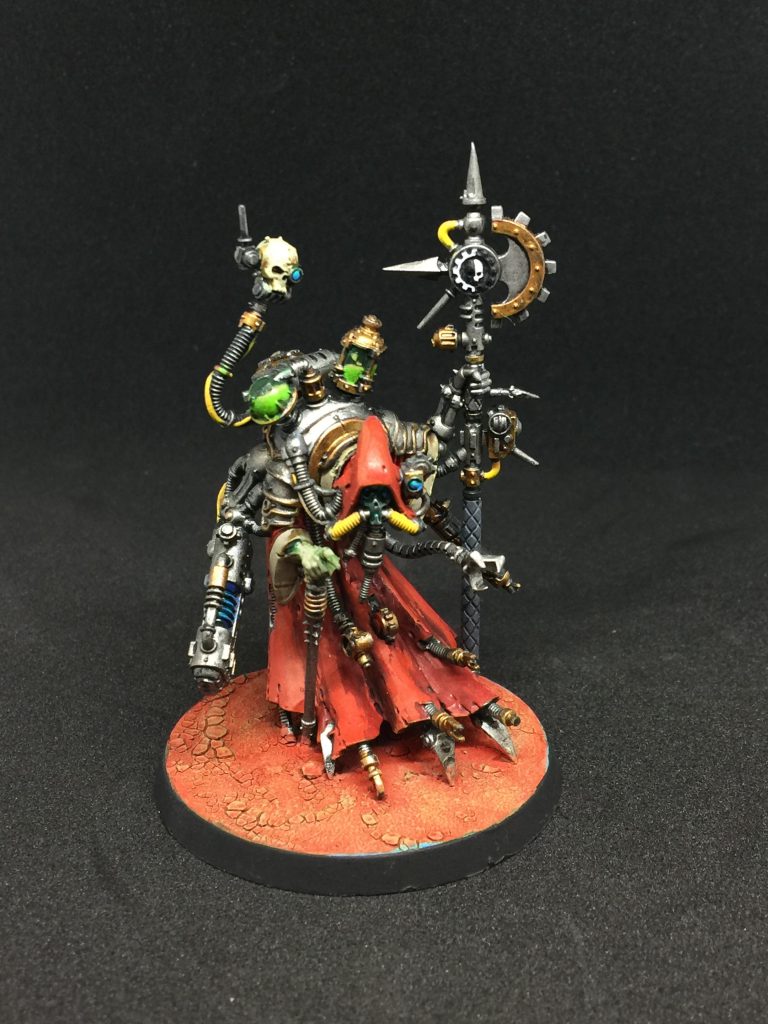 We have the Tech Priest Dominus’ Datasheet this week. They’re a decent support character who can only, at this time, repair themselves. A brief tutorial details how this repair roll works, as well as how their reroll aura works for Adeptus Mechanicus CORE units. The mission, however, is a bit disappointing. The Dominus and 10 Skitarii fight 5 Necron Immortals and their Royal Warden, on a battlefield with a few Munitorum Cargo Containers for cover. It’s a battle of rerolling 1s where the last model standing wins. 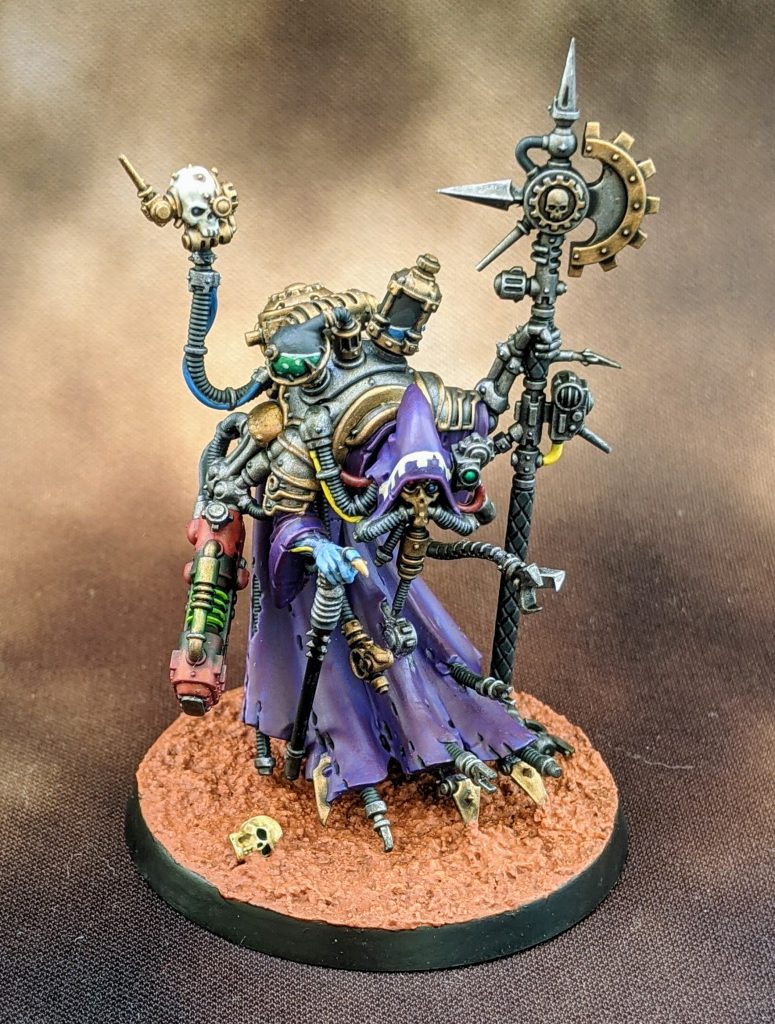 From a raw dollarydoos perspective, this is a $38 model in a $13.95 package. That’s not a bad deal at all. I do find this guy gets tossed into boxes on the regular – I think this is the third time he has come into my possession – so you may find a better deal elsewhere, but it is unlikely. The lore here does a fantastic job at letting you know just how odd this branch of humanity is, if you can still call it that, the hobby information is crucial to a newcomer, and the mission is on the middling side. It’s a middle of the road issue buoyed by an excellent model, and some hot tips besides.