Reader, I do not know your story, your life, or how you wound up in this particular midtown backalley of this particular niche tabletop wargaming website. Maybe you’re a regular at this joint, where everybody knows your name. Maybe this is your very first article, in which case, I am deeply sorry. Maybe you’re somewhere between, out of things to read when you should be working on a Friday afternoon or while you’re on your conspicuously long 3rd smoke break this hour. It’s a bad habit, but I won’t tell you how to life your life. However you wound up here, welcome to this weekly review series of a Warhammer 40,000 partworks magazine, where today we are being introduced to the Adepta Sororitas; colloquially and less copyrightably known as the Sisters of Battle.

The Canoness, Defender of the Faith, Head Brutalizer in Charge, Girlboss Superior, whatever you want to call her – is the star of the show this week. We learn about her wargear, which isn’t all too different from a Space Marine’s, just sized down and bedecked in more sanctified bric-a-brac. There is an information-dense quote from Canoness Petrova of the Order of Our Martyred Lady about what a Canoness’ duties are, namely to be as good a general as any in the Imperial Guard and to ultimately martyr themselves if need be. It’s a great introduction to the faction as a whole.

In a regrettable first for Imperium, we have a Battle Record with no tables to roll on whatsoever. We are promised that they will be included in a future issue, so we are left, rudderless, without a single D33 or D66 table to roll on. There is nary even a humble D6 table, as we are left begging for tablescraps for what we should name our angry little new friend and her various accoutrements.

Canoness [PROPER NOUN], [TITLE], hefted her rod, [ROD], as she led the Sisters of [SORORITAS ORDER] into vicious assault against the Necron raiders. She fired blast after blast from her holy plasma pistol, [PISTOL], each shot a star-hot prayer burning holes into the Necron invaders of Derek’s Mom’s Dining Table IV. Its charges spent, [PROPER NOUN] holstered the now-silent [PISTOL] and drew her prized power sword, [SWORD], itself a holy relic of [SORORITAS ORDER]. The day was young, and Derek’s Mom’s Dining Table IV still had many invaders to send back to their chosen underworld.

After this, we get an absolute deluge of information about the Sisters of Battle. This is an unusually focused issue, with every page of the lore section – hell, the entire magazine – dedicated to Sisters of Battle in one way or another. First is a high level overview of what the Sisters do, how the Orders Militant are organized, and what Acts of Faith are about. While I already knew parts of this lore, like the Sisters’ origins in the Age of Apostasy, I didn’t know they could only be trained on the charmingly named Ophelia VII or Terra itself. “Don’t mind me, mom, I’m just taking a semester abroad on Ophelia VII.” While the main 6 Orders are named here, with little icons and all, there is still license given to make up your own. The Imperium is a comically large empire, and there’s always room for other Order Militant Minoris.

Our next article is about the Adepta Sororitas command staff, namely Canonesses, Palatines, and Celestians. A Canoness is the head honcho who leads most forces, with the Canoness Preceptor commanding a Preceptory of up to a thousand Sisters, while a Canoness Commander will lead a smaller Commandery of a couple hundred warriors. Think of them like a Chapter Master and Captain if you’ve got Space Marines on the brain, or a General Manager and Shift Manager if you want real world context. Palatines command forces of a couple dozen troops, or act as the right hand of a Canoness. They’re Lieutenants by any other name, and I’m always a fan of these mid-level commanders who might lead a Combat Patrol or Kill Team-sized force. Lastly are Celestians, the veteran cadre of Sisters who act as honor guards for their officers or Super Kill Gals in Paragon Warsuits.

The Order of Our Martyred Lady is the focus of the rest of the lore section, getting an article explaining their deal as well as a story from their perspective. The Sparknotes of their history is presented here, with their name changing from the Order of the Fiery Heart to the Order of Our Martyred Lady after the martyrdom of St. Katherine. This Order is borderline suicidal, such is their conviction that martyrdom is the highest form of prayer. Junith Erutia’s story is told here in brief, wherein she was pinned under rubble but escaped to give a sermon from a ruined pulpit, which she now floats around in. It’s not dissimilar from Helbrecht’s crew of weirdos that carry around the temple he got pinned under – I guess this sort of thing just happens a lot in the 41st millennium.

The lore section closes out with Holy Fire, a short story where a battle sister with a flamer, Constance Vye, burns a bunch of heretics on Varentis II. A Repentia Superior is mislabeled as a Sister Repentia and there’s another typo or two, but this is better than most of the short fiction in Imperium. There is a goal Vye is trying to achieve – namely silencing an autocannon crewed by a bunch of Chaos cultists – and she intends to do that with her flamer. This kind of reads like a Team Fortress 2 Pyro tutorial, and Vye pretty much W+M1s her way through some Chaos-aligned baddies. My main issue with these stories is that there isn’t a sense of scale – Vye descends from “a drop vessel” which for all I know could be a warehouse-sized bulk lander or something as small as a Sprinter van. The story focuses on Vye and a few other Sisters strolling around, but it sounds like there’s a bigger battle going on around them. Is it for a block? The whole city? I don’t want to draw my focus so deeply on some fluff that’s here just to establish how a sister with a flamethrower fights, but it’s frustratingly vague.

This issue includes the Canoness you have seen plastered about this article, and as you can probably tell, it’s a lovely miniature. Fiddlier than a Space Marine but not quite the betentacled horrorshow that is a Necron character, this is going to be an interesting challenge for a new hobbyist. Unlike the Canoness you can purchase on her own, this model doesn’t have any options, but the details are crisp and every micron of this miniature is bedecked in gothic detailing that reinforces her narrative and aesthetic. There are some tricky gaps on her cloak that may need some sprue goo or deft plastic glue work to obscure, but that’s unfortunately the case with a lot of models with cloaks, capes, bathrobes, or what have you.

This model has tons of overlapping detail, and I do think it is the most detailed and intricate model to date included in Imperium. The painting guide here does a great job of showing the reader each of these details in such a way that they won’t miss anything, and will lead to some pretty solid results. Unfortunately we still don’t have a skin tone, and Reikland Fleshshade over white doesn’t quite do it in my opinion, but the results are generally decent. Now if you’re a more advanced hobbyist or just looking to try something different, why don’t you stop on by and check out our own painting guide for the Sisters of Battle? I can wait.

We get a somewhat limited datasheet for the Canoness this issue, with only the wargear represented on the miniature, unlike this freewheeling lady above with her chainsword and bolt pistol. Much of this datasheet refers to rules that we don’t yet have, on pages yet to be included. Unlike those yet-undefined Acts/Shield of Faith, we do learn what her neat stick does. There’s a tutorial for how she interacts with other Sisters that will come in handy in future issues when we finally start getting some power armored ladies with boltguns.

This week’s mission, Reconsecration, sees the Necrons trying to tear down the holy city of Alectia. Despite their loathing for humanity, the Necrons understand that faith is a genuine source of power for the Imperials, and our new Canoness and her Space Marine allies are here to uphold that very conviction. The Canoness leads a force of 5 Assault Intercessors and 3 Aggressors. Said Canoness has to perform an action in the center of the battlefield, scoring a point each time they do so. Opposing them are a Necron Royal Warden, 10 Warriors, and 5 Immortals have the Bender-esque objective “Kill All Humans” where they get a point for every unit they destroy, and 2 points for killing the Canoness. I think the Imperials have a tough mission here, as the Canoness can’t perform that action in the center of the table if any enemy units are nearby, and that’s taking one of the choice few Imperial units out of action for a turn while they Do Activities. It’s thematic and cool for sure, but it’s gonna be a challenging scenario. 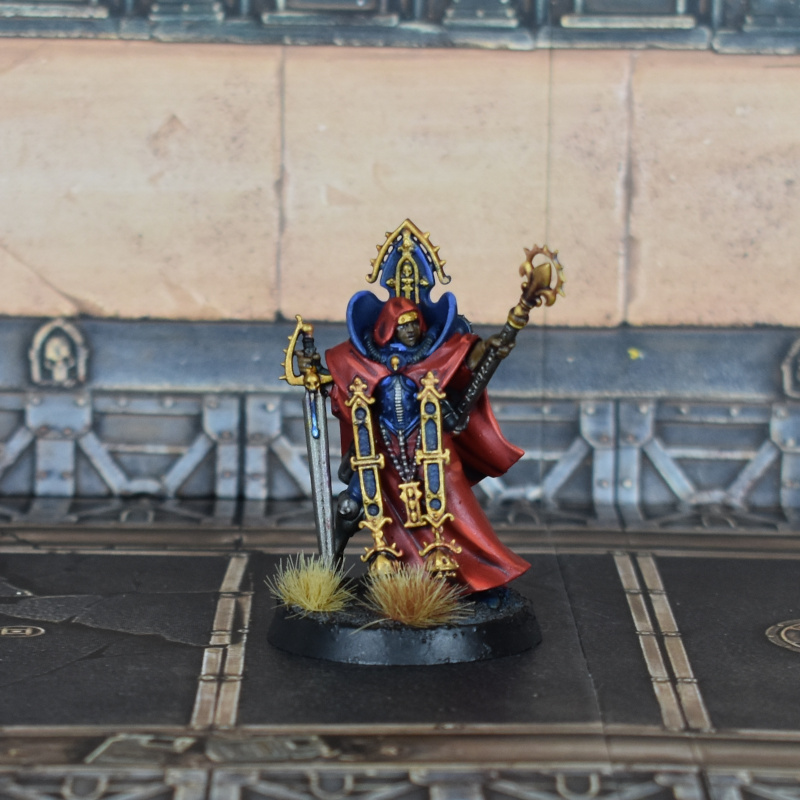 At this juncture, the only place you can get this particular Canoness model is in the Adepta Sororitas Combat Patrol box or 2019 Sisters of Battle splash box, but we can price match the other Canoness to figure out this issue’s general value. Where a Canoness on her own costs $38, this issue comes in at the Imperium standard price of $13.95, saving you a not insignificant $24.05. There are few non-paint objects you can purchase from Games Workshop for those 24 George Washingtons (ft. 1 smol Thomas Jefferson) but that’s gonna get you a nice lunch somewhere, or the week’s worth of coffees that some incurious boomer will blame you for buying in lieu of purchasing a house. What I’m trying to get at is this issue is one of the better value installments of Imperium, and if you have any interest in Sisters of Battle, it’s already a slam dunk before taking the other magazine materials into account. Those materials, by the way, are rather good, even if the short story exhibits the clunk factor that these fiction sections typically possess.