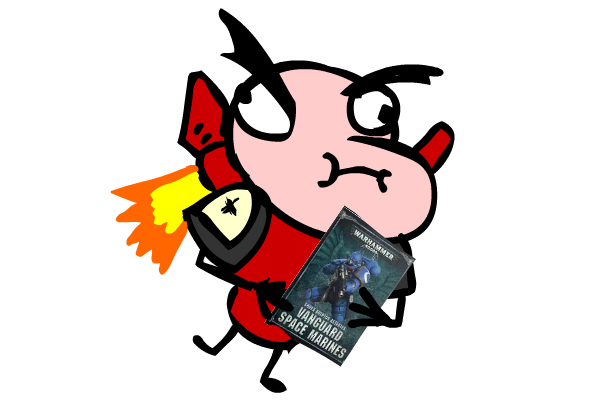 It’s been a minute, but I’m back with some progress on my Ultramarines – and I even got some games in! First up, I finished the Phobois I was working on last time and even got some Suppressors done while I was at it: 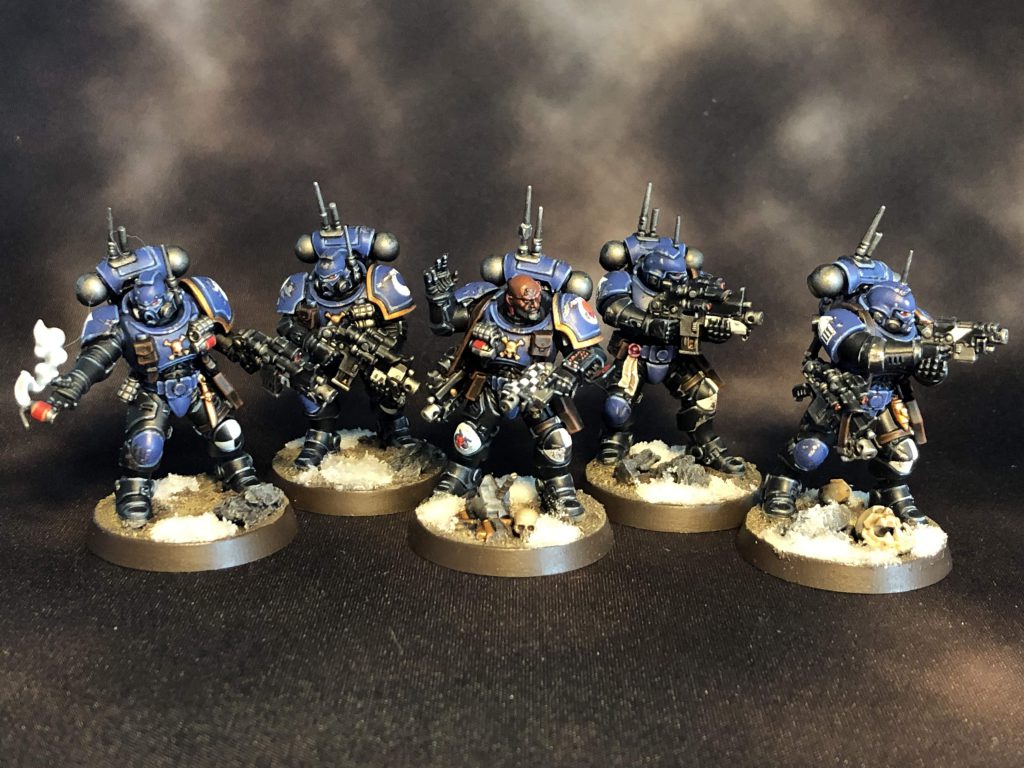 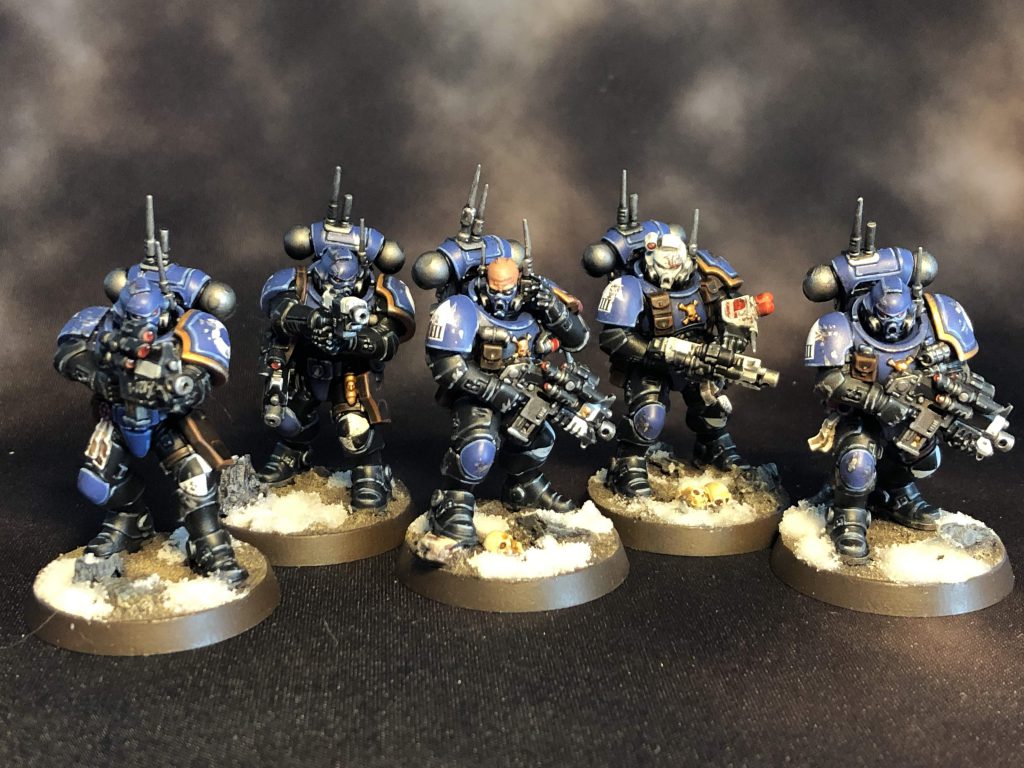 I have no idea when or if I’ll have cause to field a 10 man squad, but the prospect of using them is pretty cool to me. I wish they were two 5 man groups for detachment reasons, but whatever, I’m happy with how they came out. More exciting than them are the Suppressors, who have so far done little suppressing or impressing for that matter: 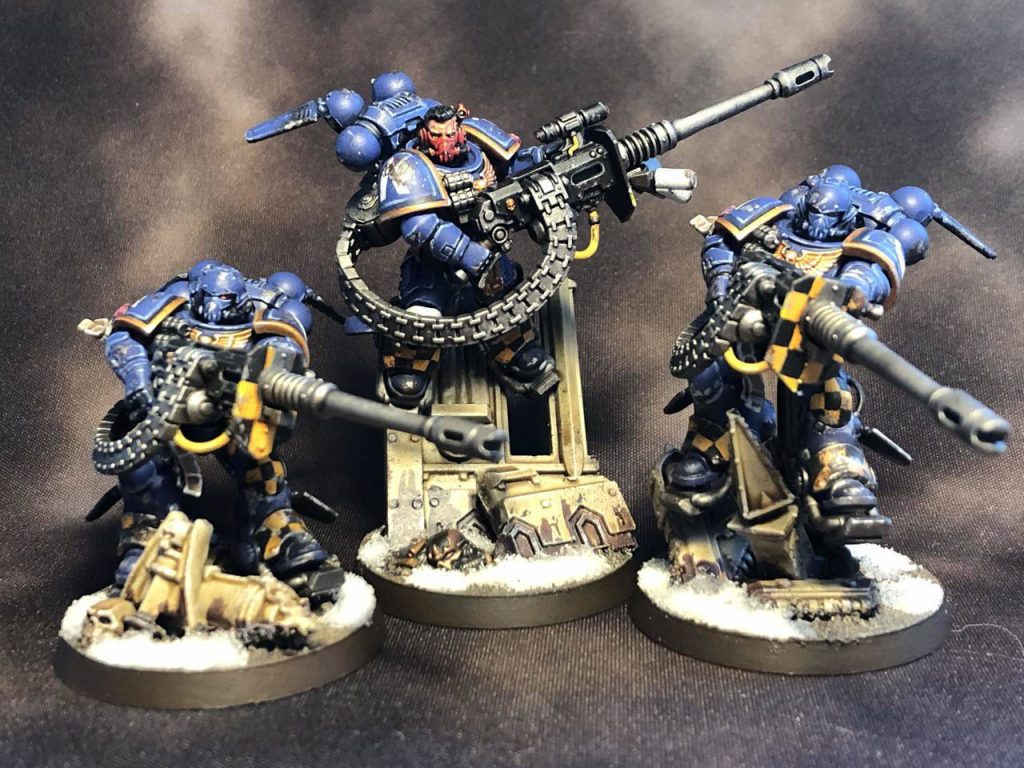 You may have noticed the buttload of patterns and heraldry I put on these guys. I just love the look it gives and the story it lends a model, and I wrote way too many words about it in my first How To Paint Everything article. Pain in the ass that it is, I feel like it gives this army some real “oomph” that box art-adherent schemes can often lack.

Anyway How Bout Them Games?

I played a trio of games at my buddy Dylan’s place, where he hosted a narrative event, The War for Thurassis IV. The missions were a bit wacky, but a load of fun. My first battle saw me face Necrons for the first time this edition. 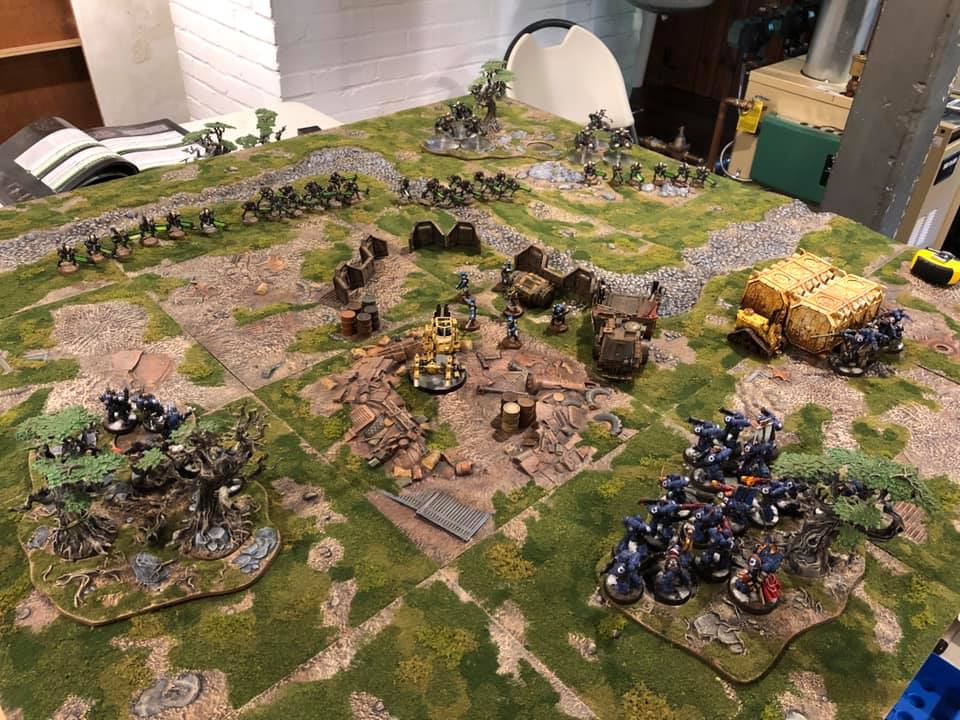 The scenario had their whole army deep strike, which meant my Infiltrators got to be useful right off the bat. Unfortunately the VIPs in the center of the board got slaughtered before my first turn, but it at least saved my dudes from getting shot up. From then on, the game was our two armies advancing and rapid firing at each other until the Necrons decided to stop getting up. The highlight of the game was when our warlords, Vulpes Vulci of the Ultramarines and Overlord Bellyflop faced down in single combat: 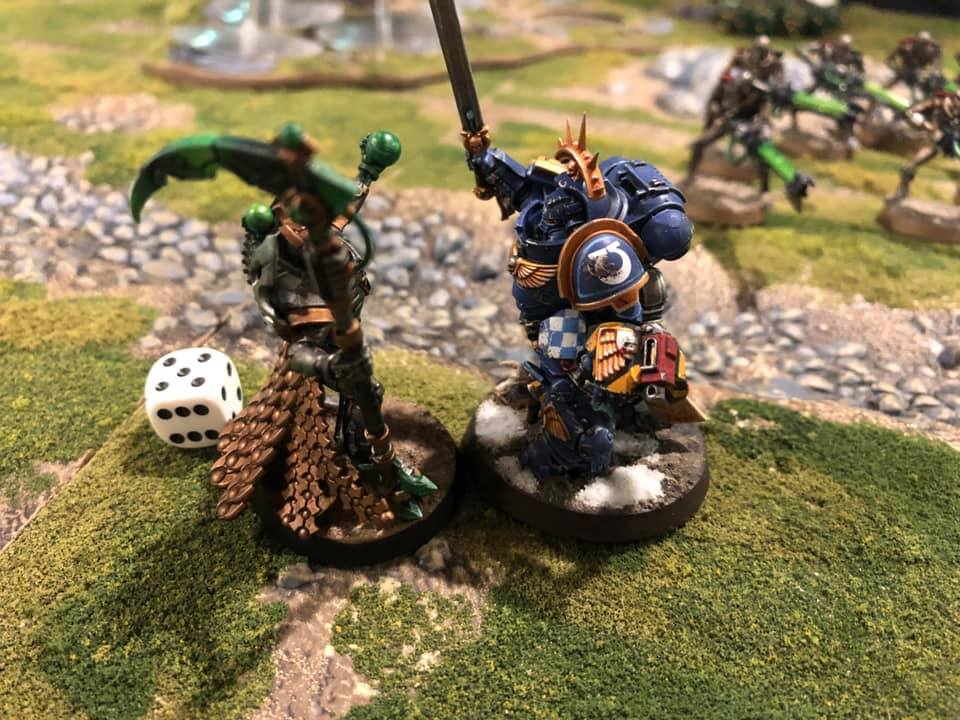 Vulpes punched him real good, then used the fight twice stratagem to punch him even gooder. He killed the robotic jerk, only for a strategem to be played which brought the Overlord back to life. Bellyflop charged, Vulpes shrugged off all his scythe attacks, and put the bot down for good. With the Necron army in a rout and the VIPs dead, it was a bitter fought draw.

Game 2 had my force set up in the center of the board while the Black Legion came in from the sides. This proved to be less than advantageous, as I started in charge range of a rather choppy force. However, I was able to start in that most sacred of formations, the Space Marine Battle Pile: 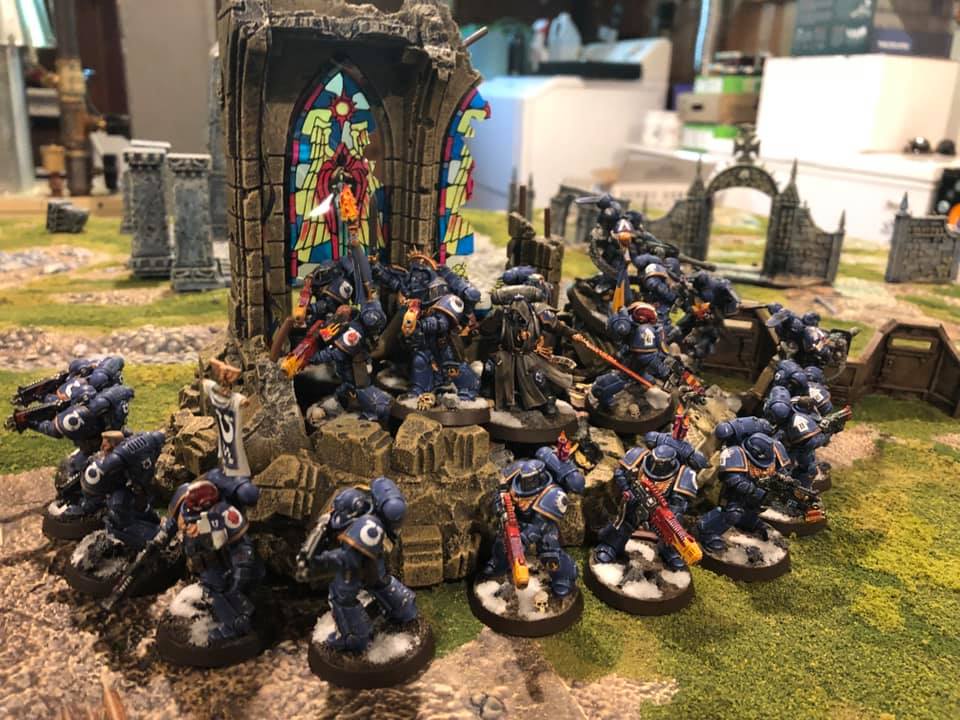 The problem is, that pile lasted all of one turn before getting butchered. I got overeager to get into rapid fire range so instead of falling back and whittling my enemies down, I moved up and tried to shoot them up. 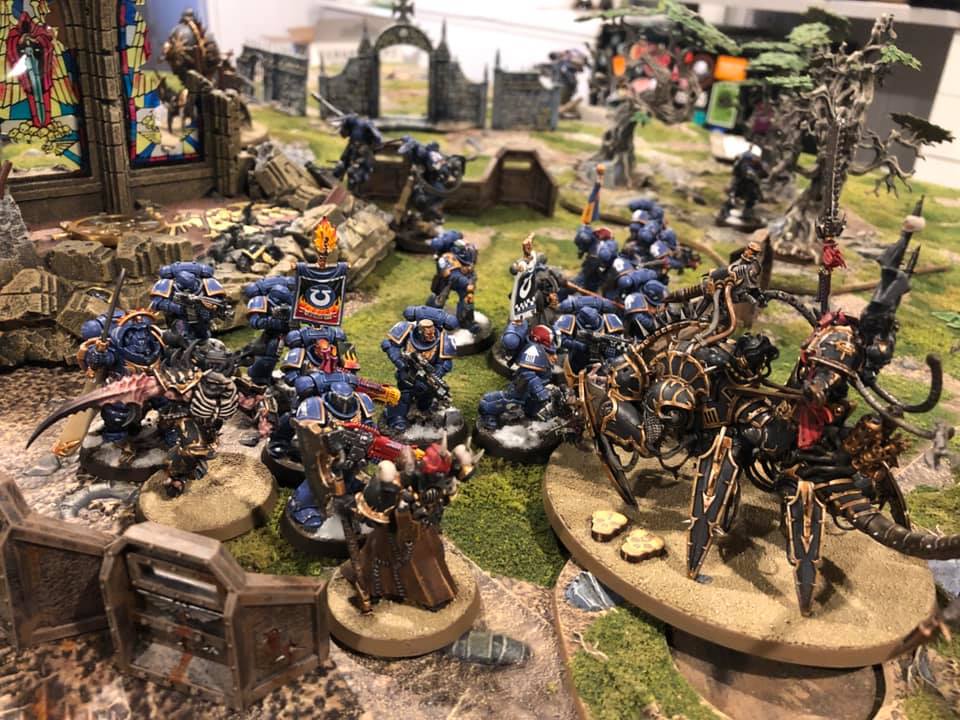 My army got thoroughly brutalized, but before my ignoble turn 3 tabling, there were some heroics to be found – after Vulpes Vulci’s defeat at the scuttling claws of the Lord Discordant, his loyal Lieutenant stepped up and finished the brute off. 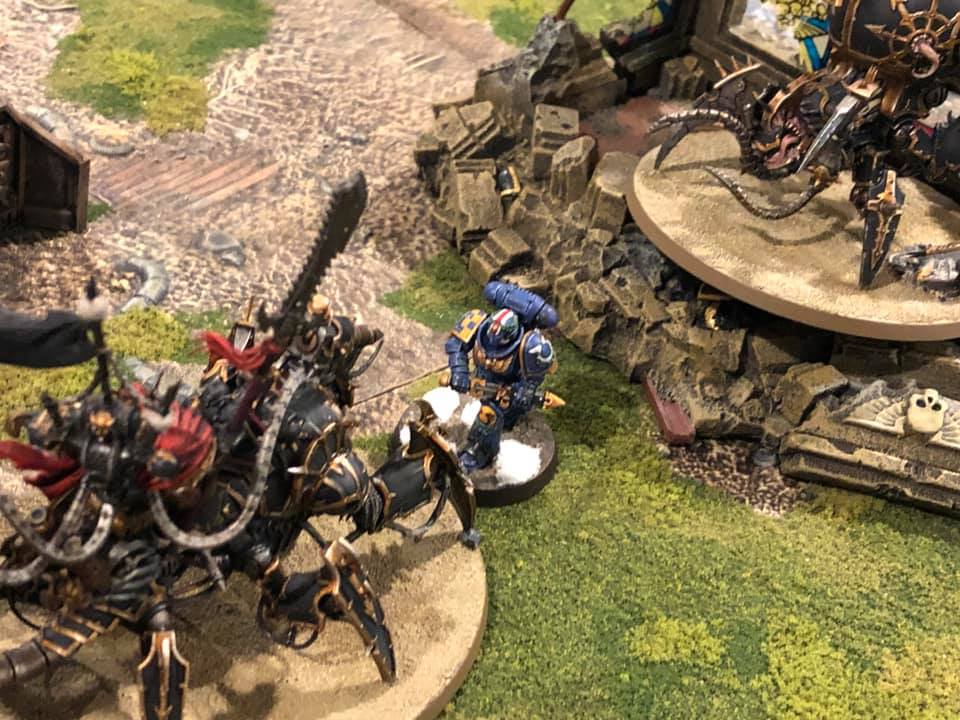 I mean he didn’t last much longer, but his heroics will not be forgotten. This one was a sound defeat.

My third game was against Cody and his spooky space elves. This mission had me guarding a Valkyrie with some VIPs hanging outside it. His mission was to capture them in close combat. My first tactic was to set up extremely poorly, exposing my Infiltrators and decentralizing my force. 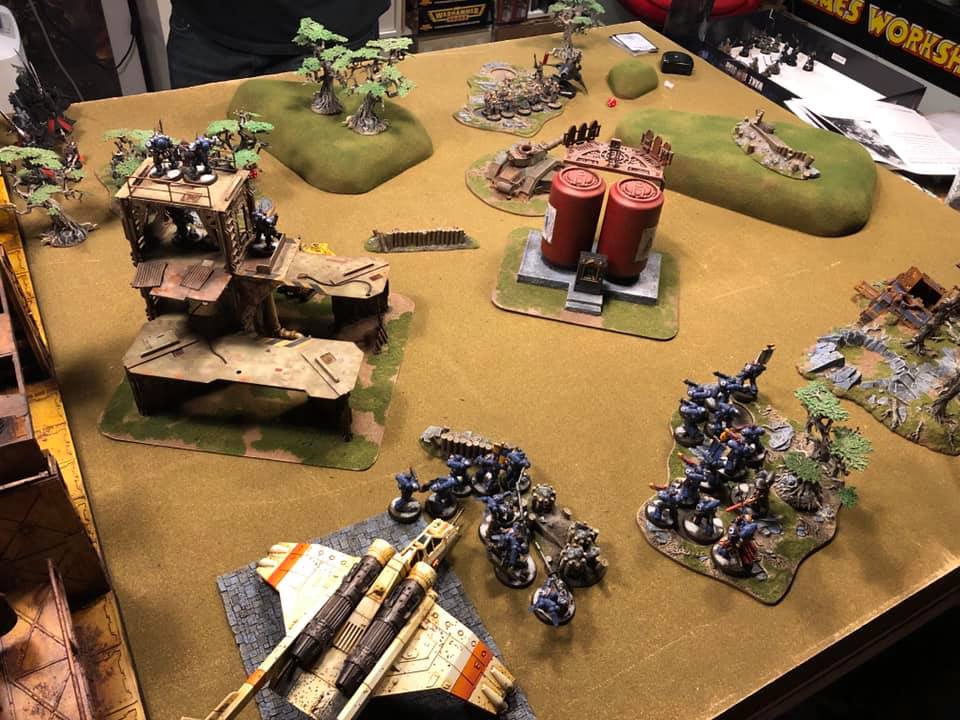 He outflanked with his Mandrakes, drove up the left flank with a raider full of an Archon and his Incubi, and charged up the middle with his Wracks. I secretly had a squad of Intercessors in the Valkyrie (so secret, Dylan told it to me on turn 3 and no sooner) who were able to jump out and help me get a full on feelbad surround on his Incubi Raider, destroying it and preventing escape for like a third of his army. I can’t say I like that rule but it was my only way out in this battle against a shrewd opponent. While that happened, I had to start diverting my force towards the Wracks and Mandrakes who were closing in on the VIPs. 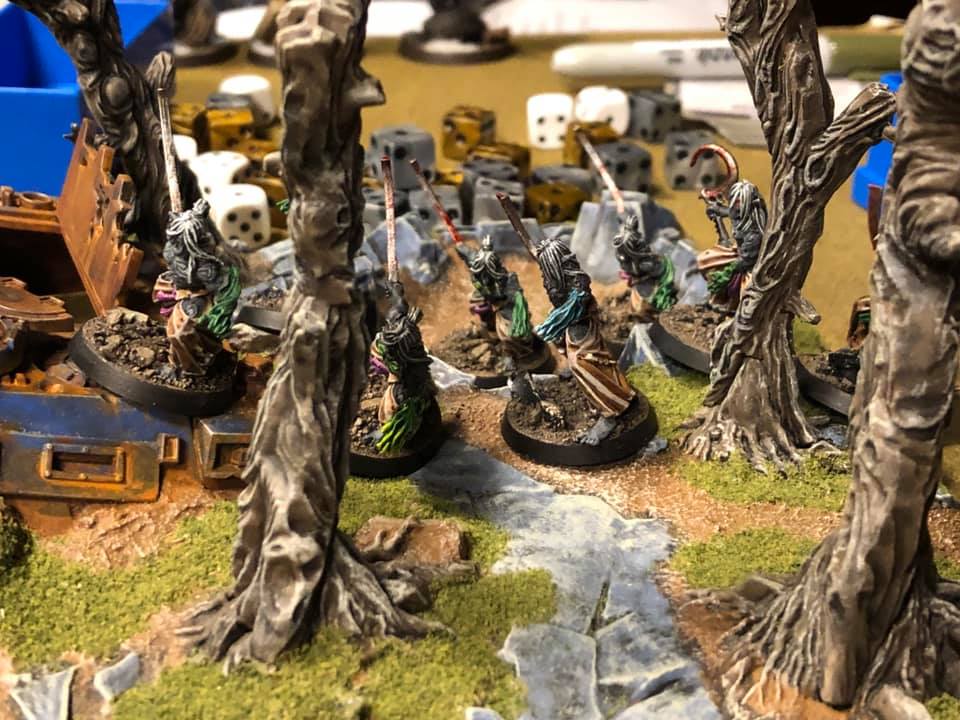 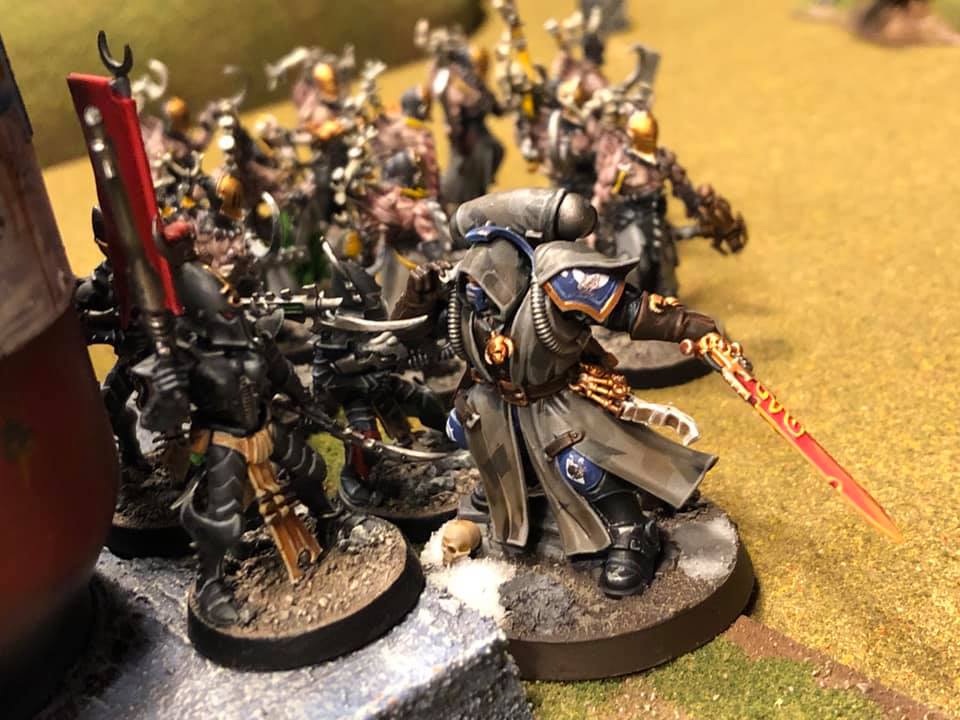 Fortunately my boys were able to hold the line after that Valkyrie “gotcha” move, and we only lost one VIP to the Mandrakes before the Valkyrie took off, securing an Imperial victory.

With my win, loss, and draw, I wasn’t going to be the winner of the day. That honor went to Cody and his Dark Eldar, who proved as nasty and tricksy as ever. I found myself in kind of a sour mood after playing them as I often do, and he and I discussed why. While factions like the Astra Militarum, Orks, and Marines of all flavors all make sense to me, Dark Eldar are something of an enigma. Every turn sees some rule or ability I didn’t see coming, or some decision made that feels like a “gotcha” to me. With this in mind, Cody and I will be playing more games where I can learn about this faction and I can be bamboozled a little less often.

This dovetails into my late game decision to try and get good at this dumb game in the month before NOVA by playing a bunch of games against opponents who I know to be cunning and strategic. I’ve got at least one lined up with Cody and another with Gundam John, and I’ve even read up on Rob’s excellent guides to playing competitively. Even if I know some of this stuff, it never hurts to read up on it.

Finally, I’m working to cure my serious case of not having a tank, and I’ve started my Repulsor! Not the new, good one, but the old less good one. While most of it isn’t that impressive yet, I painted the turret gunner to get myself motivated. I’m painting each piece to completion individually, which I think will make for a more pleasant tank painting experience, and one that won’t involve me forgetting the lens on the left stormbolter turret or whatever. 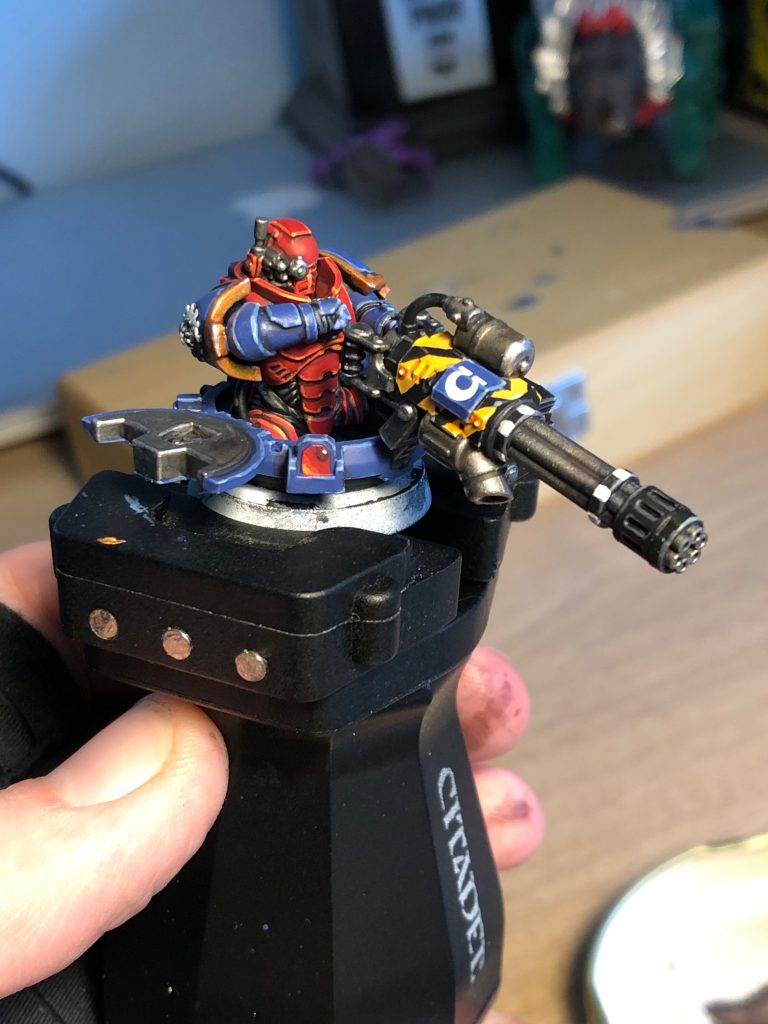 My oh my would you look at the time – just over a month go go!