With the conclusion of the NOVA 40k GT, the three major US tournaments in 2019 are behind us, leaving only the London Grand Tournament as the final “Grand Slam” 40k event to go. And while NOVA gave us an exciting event packed with interesting fallout from the April Big FAQ, because of its timing, the rules from the new Codex: Space Marines and Ultramarines and White Scars supplements were not allowed in the event, making it difficult to use the event’s results to determine what impact those books had or will have on the meta. The good news is that the LGT has a way better system for collecting and checking army lists, and as a result, we already have access to the lists that have been submitted for the event.

In this article, we’re going to do a breakdown of the NOVA GT armies, factions, and performance, and look at the LGT as well, and compare changes between the two to look at what the early impacts of the new Codex: Space Marines and Errata and changes are.

The 2019 GT had 295 active players with armies spread across 27 factions representing pretty much every mainline standalone faction in the game. Among these, Imperium (soup) armies represented the largest portion of the field, with 53 lists, or 18%. Chaos armies using a mix of Daemons and Marine factions fell in second with 33 lists at 11%, closely followed by Eldar and Eldar soup lists (32, 11%). 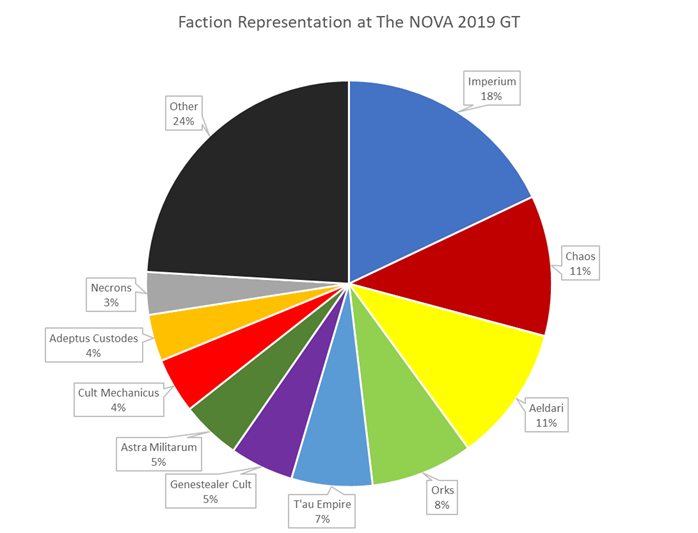 I’m not going to spend a ton of time on the implications here; while Imperium lists came in several different flavors, many of them looked either like traditional Knight/Guard/Blood Angel lists or incorporated a mix of Custodes/Knights/Guard or Custodes/Knights/Ad Mech, taking advantage of the not-yet-updated Caladius rules. Similarly, Chaos lists came in several flavors, both those incorporating Daemon-heavy builds with Plaguebearer hordes and those focusing more on the Chaos Space Marines portion with Lords Discordant. Eldar lists leaned heavily on flyers. 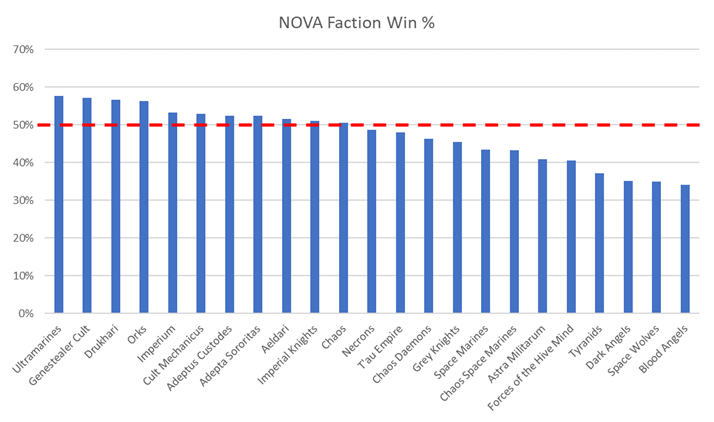 By raw Win Percentage, I was surprised to see Ultramarines come out on top. In total, 7 players at the NOVA GT were listed as Ultramarines players, and a cursory look at their lists shows that they primarily revolve around using Guilliman’s re-roll hits and wounds aura (RIP) to boost the effectiveness of Repulsors Executioner and/or Contemptors and Eliminators. Less surprising were Genestealer Cults, which made up 5% of the armies at NOVA (15 lists), and tend to be a very difficult army for players going up against them for the first time. Likewise, Drukhari and Orks were less surprising, as both are known to be strong armies. T’au were the big surprise on the low end, finishing under .500 despite containing the winning list. T’au Empire was the fifth most popular faction with 19 lists/6% of armies (most of them using T’au Sept), and in many ways Richard Siegler outperformed his peers. Only 7 of the 19 T’au players posted a winning record, and of those 3 secured their winning records by playing into day 3. Comparatively, 7 of 15 Genestealer Cults players had a winning record, and did so without having to scrape out day 3 wins from a losing position (only 6 T’au players finished in the top 100 compared to 7 GSC players, and remember that there were more T’au players).

Raw Wins aren’t the only story, however — they certainly paint a picture of army strength, but point totals potentially tell us more about how well certain armies thrive in the NOVA format. 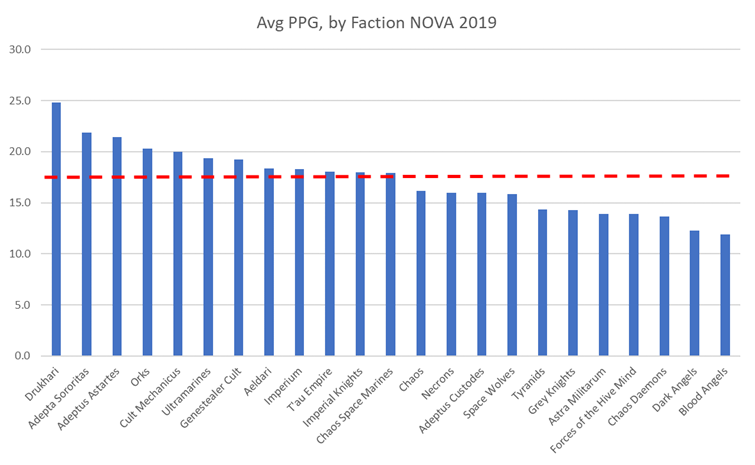 Here’s where we can see that Drukhari are really in another category altogether when it comes to generating points in the NOVA format, but not necessarily in a way that translates to wins. This is the part where I have to vent my frustrations with the BCP app and how difficult it is to extra data from it; I’d love to have data on the average margin of victory and opponent points scored for each faction, but pulling that data from BCP is currently too difficult and time consuming. Instead, we can infer that Drukhari, who score the most points per game by a significant margin but do not also average the highest win rates, probably also surrender more points per game on average. Similarly, Chaos were about average in win % but below average in scoring, suggesting that they likely gave up fewer points on average than other armies. Something interesting to consider, and worth looking into if the data becomes available.

Of course, the NOVA GT didn’t incorporate the new Space Marines codex, the changes to Index units, Hateful Assault for Chaos Space Marines, nor the adjustments to Forge World Custodes units. As a result, while there’s useful information to be had from mining the NOVA results, it’s not as predictive as it could be. So let’s take a look at the 378 (parse-able) lists that have been submitted for the London GT and how the game’s factions are represented: 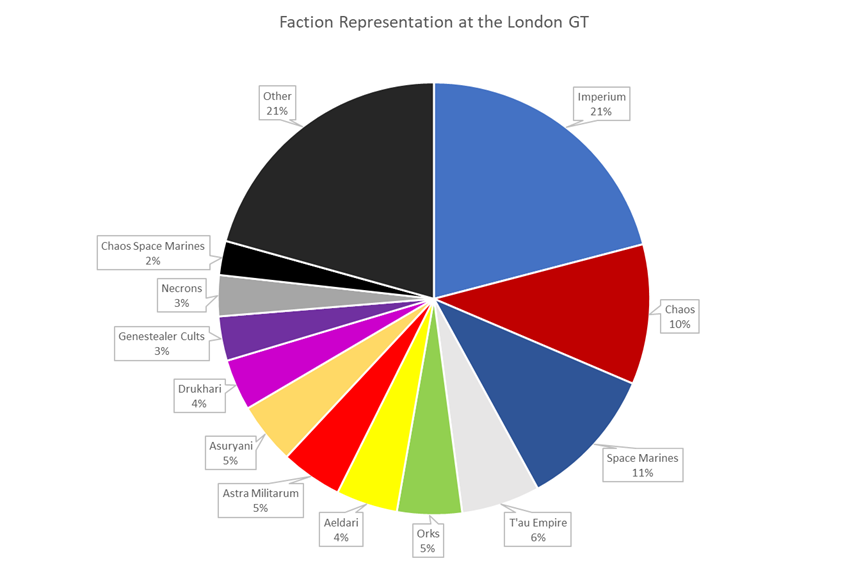 Immediately what jumps out – and should be no surprise – is that Space Marines are a much larger presence at the LGT than they were at NOVA, making up 11% of armies once you include Ultramarines and White Scars lists in the totals. While it’s hard to point to one faction taking a big drop as a result, the net effect appears to have pulled most from Aeldari, Custodes, and Genestealer Cults armies. 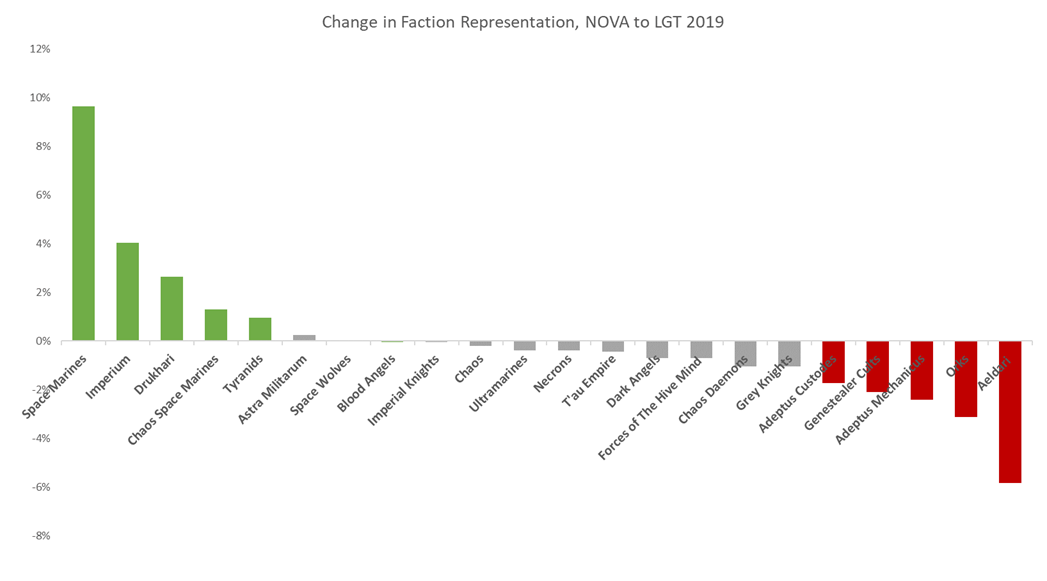 The key message here is clear: If you’re at the London GT, you better have a plan for Space Marines. And also Drukhari, probably. Depending on how Marines do in the event, we’ll likely either see them increase or decrease in frequency by LVO. The other thing to note is that you’ll still need to be on the lookout for Imperium Soup sporting Knights. The Castellan may be gone, but triple-Knight lists and Armigers are still very common, and were common to see at the NOVA GT as well. Just because they didn’t win at NOVA doesn’t mean you won’t need to beat them if you want to climb the mountain.

When it comes to soup vs. monofaction, about half of the lists submitted to the LGT use a single faction, and an equal split of the remaining 40% use two versus three factions when building a list. Drilling down on the factions used in each list shows that the most common CP-generating factions are still the Astra Militarum and the Adeptus Mechanicus. Chaos Daemons also make it into the bulk of armies listed as just “Chaos” and despite the new codex, Knight/Astra Militarum/Blood Angel lists are still around and kicking. After all, if it ain’t broke…

If you read our Hot Take on the Custodes changes last weekend, you know that Custodes got a major shake-up, with changes in points costs to the Caladius and a shift in combat roles for the Pythite and Adrasite Custodians. Several conversations I had at NOVA had led me to believe that the Caladius would no longer see play now that it had gone from “stupidly amazing” to just “merely good” and it appears to have had a cooling effect on the unit’s inclusion in lists: only four of the 7 lists with Custodes had Caladius tanks in them. Jetbike Shield Captains and Vertus Praetors were just as likely to show up in lists.

Having full access to a searchable set of lists allows us to do some more interesting analytics around the contents. One example is looking at Faction CP, where we can see that most players either have 10 CP or 14 CP to work with when the game starts, and points to two Battalions as the most common army structure. 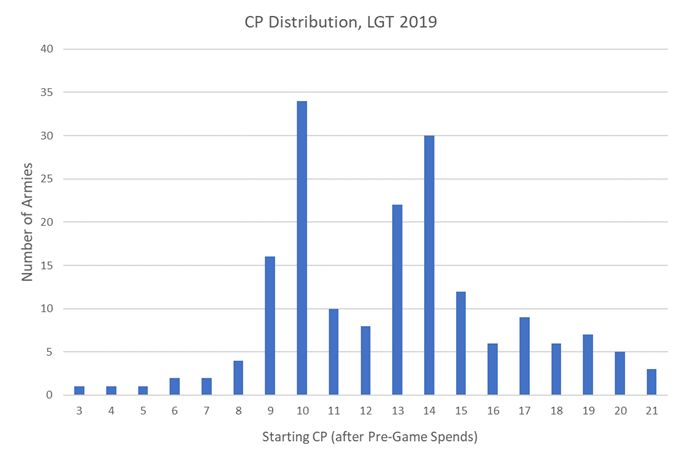 More than 100 LGT lists are using Specialist Detachments, with the most common being Dread Waaagh! Specialist Detachments account for nearly one fourth of those used and appear in every single Ork army being run (19 out of 19). So if you’re up against Orks, expect a lot of double-firing relic Shokk Attack Guns. Similarly, Soulforged Packs show up in 6 out of 10 Chaos Space Marine armies, so expect to see a lot of Lords Discordant making use of those. And 11 out of the 13 Genestealer Cult armies are running the Deliverance Broodsurge (1 is running the Anointed Throng), so if you see Genestealer Cults, plan on dealing with their close combat tricks.

The most common Specialist Detachment in LGT lists is the Emperor’s Fist Tank Company, which shows up in 28 lists. Most of these (19) also take the Hammer of Sunderance relic, giving their tank a souped-up 3-damage Battlecannon. Taking the Unflinching Resolve Warlord Trait on a Field Commander was far less common (only 3 lists). Speaking of which, 24 armies opted to use Field Commanders. The most common Field Commander upgrades were the Soulforged Pack, where the extra 2″ to move for friendly Daemon Engines can be a big boost, and the Deliverance Broodsurge, where the re-rolls on Advance and Charge rolls make Genestealer Cults even meaner. 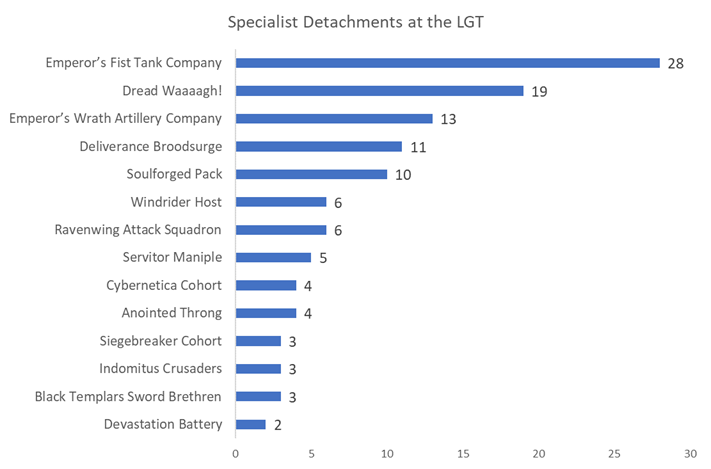 It’s certain that we’ll see more Space Marines lists now that the new book is out and being used at events, but it remains to be seen how good they’ll be at the tournament level. Which isn’t to say that I think they’re bad, moreso that I think we’ll need some time to adjust to their release and figure out which strategies work. Hell, as of this writing the new Impulsor hasn’t been released yet, which could have a significant impact on the lists. Generally, as you prepare for the LGT and tournaments afterward, I’d use this data to better understand the field you’ll be facing: The greatest skill a tournament player can cultivate is reading and understanding the tournament rules and their opponents’. Especially for Genestealer Cults and Tau.

As always, if there’s anything you think we missed or would like to see us cover in a future analysis, comment on the article below or shoot us a line on Facebook or via email at contact@goonhammer.com.