Summertime in Astradus: A Campaign Update

If you’ve been following Goonhammer since the beginning, you may remember me as the guy who writes about campaigns, and maybe even that I wrote about a campaign I’m running. If not, here’s the brief rundown: After wrapping up my last campaign in 2018, I started a new campaign at the start of the year, taking place in the Astradus System, a system that was previously lost during the Heresy and which has now re-emerged in real space. You can read about my plans and the setup for the campaign here:

An Update on the Campaign

So after all that work to set things up, I thought it would be good to give an update on where things are–who’s leading, how’s the narrative working, what works, what doesn’t, and what I’m planning (though note that I won’t be giving away too much — my players may read this!). The good news is that so far, things are going pretty well overall. The players are enjoying the campaign, we’re playing a ton of games, there’s lots of conversation happening about playing — it’s all in-line with what I was hoping for when I started. The whole thing has been a lot of work to keep going so far, but the time has been worth it.

The Astradus Campaign is composed of a series of Rounds, or 3-to-6-week periods over which games are played. During each round, players receive “Orders” that dictate the games they are supposed to play for that round. These usually include one matched game against a specific player (I try to do some record-matching here), one open game a player can get in against anyone, and one event mission that tends to be open but has specific rules associated with it. There’s also a Kill Team game on there and listed rewards for each game victory — note that players can have different rewards for the same mission, depending on their current standings. I also try to give most players one custom mission (a mission that only they and their opponent will play that round) and one standard mission (that everyone plays) each round.

Here’s an example of a player’s Round 3 Orders for one of the campaign’s Dark Eldar players: 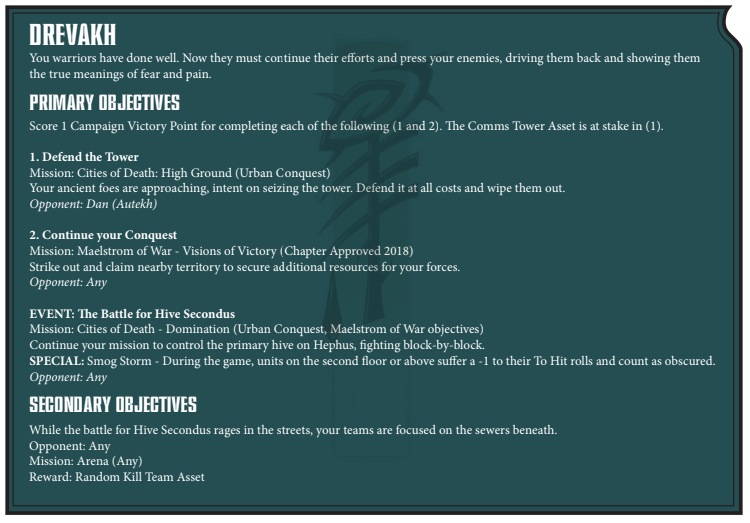 Here, Defend the Tower is a custom mission for the Dark Eldar and Necron players — the Dark Eldar player won one of the “Capture the Tower” events in Round 1, and so had to defend his claim in Round 3. The second mission was one everyone had, though midway through Round 3 the new Maelstrom of War rules came out and we started using those instead of the mission rules for choosing objectives. Going forward, I’m planning to pick Maelstrom missions from the list Corrode and I put together in this article.

Prior to the campaign, I mailed players a bunch of envelopes that they were instructed to open each round. The cards in these determined the starting assets for players and also determined the size of armies they’d be able to take each round. Currently, here’s what they’ve opened:

This allowed us to do a bit of an escalation campaign as we ramped up, giving some of our newer players a way to build up to fully painted armies, while also giving us an opportunity to play more games at the outset. There are also Kill Team escalation cards that right now allow Kill Teams up to 150 points in size, but Kill Team has only been a minor part of the campaign so far.

As I write this, we’re wrapping up Round 3 in one week, and here’s a quick rundown of the stats for Astradus to-date:

There are currently 25 active players spread across the Northeast corridor in the U.S. participating in the Astradus campaign, and it’s a lot to manage! Overall, things have gone pretty well. Here’s a faction breakdown of who we’ve got:

We have a couple of stragglers who played in round 1 but haven’t participated since, and I’m hoping to rope them back in for more games soon.

Standings-wise, Orks are crushing it right now. 3 of the 5 campaign Ork players are in the top 10, and a fourth is in the top 12. Dan “SexCannon” Boyd is also doing pretty well as a participant, with his Raven Guard under the command of Shadow Captain Lanius taking the lead in this most recent round after a major victory over ANAmal.net. Sadly, the forces of Chaos are not doing so hot. I blame our Death Guard and Thousand Sons players, who have repeatedly eaten shit in campaign games. Makes our whole side look bad, really.

Speaking of which, ANAmal.net is currently in last place in the campaign among active players with 1 Campaign Victory Point earned, and that was for accidentally killing an enemy warmaster for once (his own Warmaster, Interrogator-Chaplain Barbatos, has done more wounds to himself with his relic combi plasma gun than he has to enemies). His Dark Angels have gone 2-9 in campaign games, with one of those wins occurring in a Kill Team game against Pwong’s Orks and the other happening when he and Felime switched armies for a game and he beat his own shitty Dark Angels. The upside is that he’s currently working on his army, and may eventually eke out a win here. Maybe.

So far, I’ve tried to go light on having a defined story for the campaign. This is intentional, to keep things loose while the players can build their own narrative hooks through games. The basic narrative is that everyone is fighting over lost relics and technology, but I’ve seeded a few interesting hooks into the player narratives to give them something to work toward and make things more interesting. The big ones there are rumors of a hidden lab that belonged to Fabius Bile that the Custodes are searching for, and some kind of unknown object in orbit around the Astradus star.

But those are more of a “slow burn” narrative that I’m doing things with throughout the campaign. Most of the narrative is being built by the players. And so far, the story is that Ork hordes are dominating both planets in the system (half the players live in two different states, and each one is being treated as a separate planet). Greggles’ Orks, led by the Big Mek Snazer Gob, have consistently dominated the surface of Lunoria, going 14-4 in engagements and injuring warmaster after warmaster. Their reign has only been matched by Ork Komandante Slay Guevara’s reign on Hephus, and the two have begun to battle for the favor of Gork and Mork by attempting to collect more gubbinz than the other. Bangskrit and Grubslag have been close behind.

To give the Ork players something to compete over, I started the King of Da Gubbinz competition. Essentially, I have the Ork players track how many vehicles and units with a 2+ save they’ve killed, and award them 1 Gubbinz for each. Whichever player ends a round with the most gubbinz is then King of Da Gubbinz, and gains a favor from Gork and/or Mork, in the form of +2 Strength and +2 Leadership. Right now Slay Guevara and Snazer Gob are tied, so each gets +1 instead.

Additionally, I decided to turn Relic and Ally discoveries into more of a roleplaying opportunity, setting up some quick events in our campaign Discord after each game win involving a relic. One example is the Slann ally Babajide, whom our Custodes player Felime won after beating Macathu’s Death Guard. Rather than just give Felime the ally, I instead described him finding an odd coin that led to the ally approaching him, and gave him a choice of whether to work with the Slann as a guide:

This opens up some opportunities. Story-wise, I can have Babjide be a step in leading Felime’s Custodes to the lab. If he refuses, I can have Babajide approach another player, or make the coin relevant in some other way — the point is, it gives me several options, and also lets me ensure that the wrong players don’t get certain relics or artifacts, such as a Tau player getting a force weapon. The net result was also great as well–Felime has started converting up a slann Kill Team (using Kroot Mercs rules) to represent the little lizardmen running around with his Custodes. Stuff like that makes my day as a GM, cause it shows that players are really getting into it.

The games have been good too! We opened up Round 1 with a special multi-player event called Capture the Tower. This ended up being 4 games (2 on each planet), with a special tower asset available in each and a special mission to play for them called “Capture the Tower.” These went over really well and led to some fun games. I liked them so much I decided to include an ongoing event in Rounds 2 to 5 called The Battle for Hive Primus/Secondus, where every round players have to play one Cities of Death mission and the players who amass the most wins over that period get to fight to win the hives as campaign assets. Capture the Tower was a real blast, and we ended up splitting the two games (one for each planet) into four. Each game had between 4 and 8 players and involved multiple lead changes. We used 2-player teams for ours. If you’re interested in the mission we used and the bidding system in that mission, you can find it here. 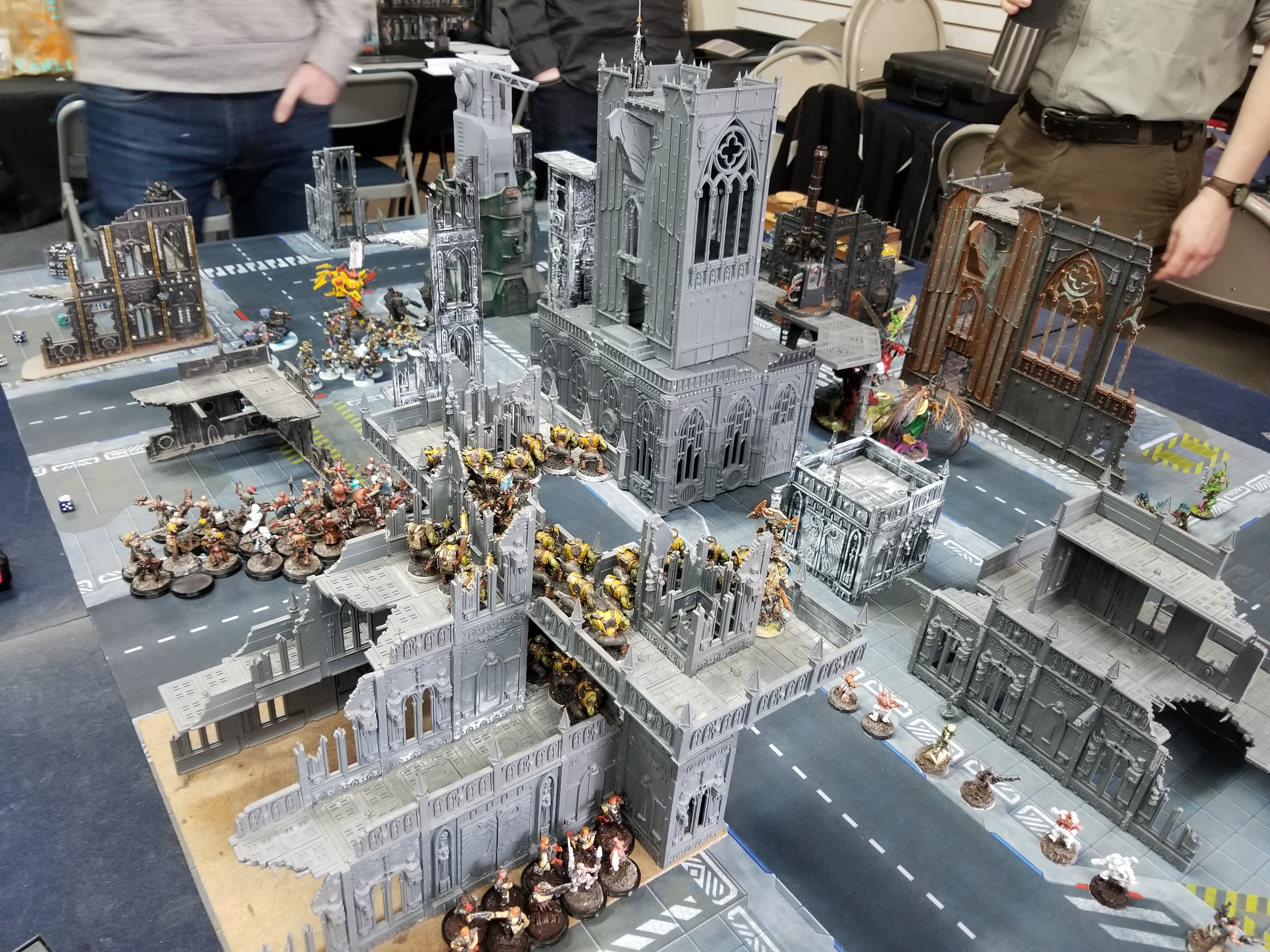 We’ve also done a few other special missions to accommodate stuff going on with players in the campaign. As a GM, these are fun slam-dunk moments where I can play up to what will make the players happy while also doing cool stuff. Here are a few examples:

I spoke at length about some of the mechanics I wanted to use in my campaign and three rounds in I think I have a pretty good idea of what is and is not working. So let’s run through those aspects, with some thoughts on each.

Some things are working very well!

What’s Not Working As Well

Other things, not so much.

As we move on to round 4, we’re getting into the 2,000-point list stage of the campaign. I’m eager to play at this level for a few games before we start figuring out how to incorporate Apocalypse into campaign games.

Here are some things I’m mulling over for future rounds:

Anyways, that’s it for this update. I’ll likely post another update later this summer, sometime after NoVA is over and we’ve wrapped up round 4. As always, if you have any questions or feedback, feel free to shoot us an email or comment to us on Facebook or Twitter.