Swords Of Davion Squad Teilo, The Last To Leave

I had to re-photograph these dudes for another project I’m planning.

Kit is a mix of mkIV resin marines, deathwatch/old school/current assault marine legs and as always a raid of my bitz box.

I covered a little bit of the background of the Swords Of Davion in my last post about my kill team. Davion Primus is the seat of power of the sector and was the first world to fall to Chaos when the eye of terror opened. This event forms a core part of Squad Teilo’s history and how I painted/modeled this group of reckless (but not jumpy) lads.

Before this incredibly nasty event went down, the majority Swords of Davion where pursuing a surprisingly crafty Khornate cult in a nearby sector. This ended up being a deliberate wild goose chase to pull them further and further away from Davion.

Squad Teilo was part of this action. Once the Astartes realised they had bumbled into a trap (admittedly with mostly good intentions) they rushed back to their homeworld sector. 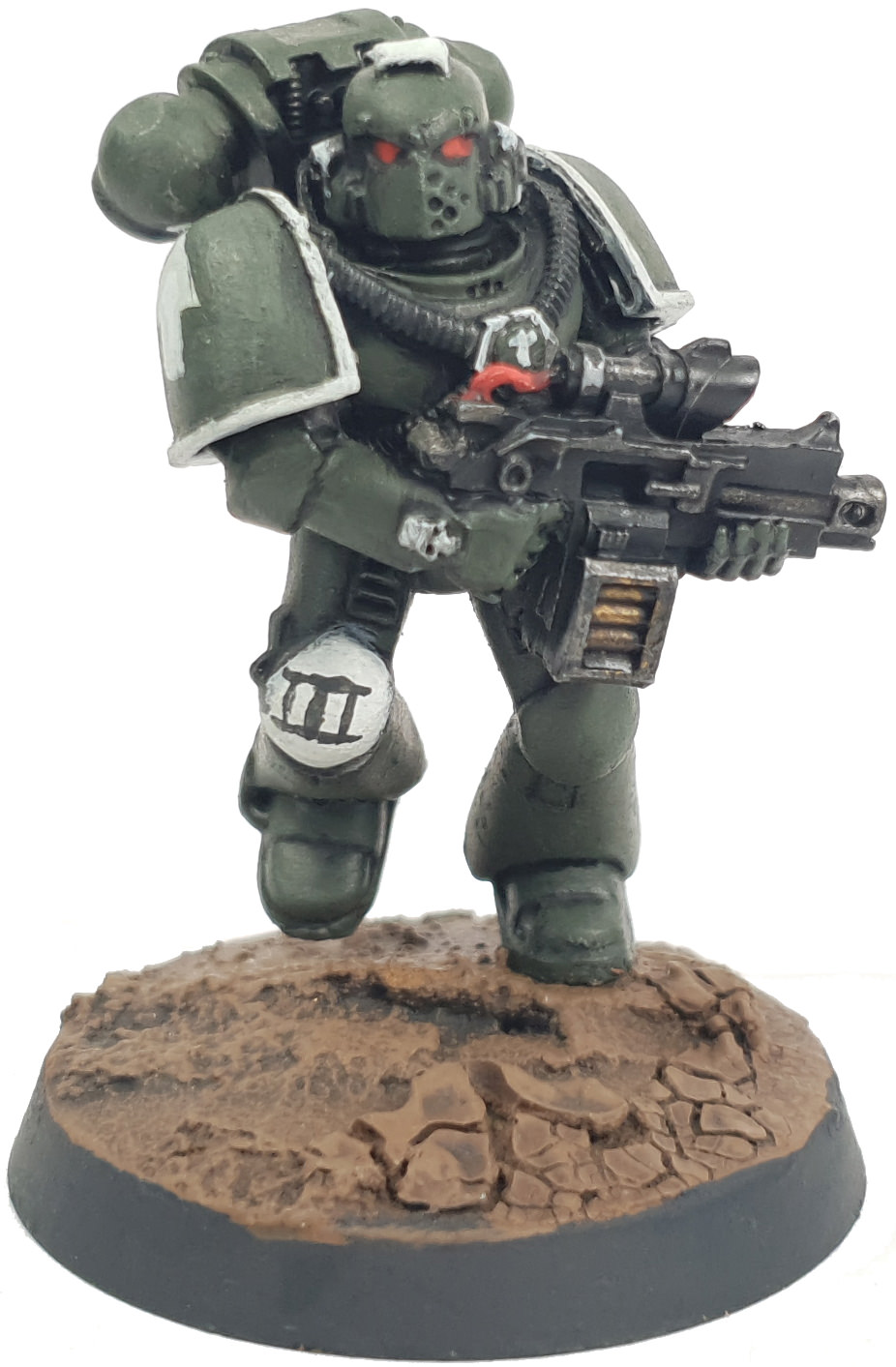 This guy is pretty much the most typical SoD tactical marine. Clad in mostly MKIV armour with a few VII pieces, he is armed with a extended assault mag bolter. A handy thing given that SoD tacticals specialize in shock assaults out of razorbacks.

They were too late. While the Swords of Davion fortress monastery on Secondousheld and would later become the core of the resistance, the same could not be said for Loholt, Thaban and most importantly Primus.

Sergeant Teilo. Teilo is an old friend and sparring partner of the chapter’s exile, Owain. Squad Teilo frequently provides Owain with transport and protection as he attempts to complete his penitent quest.

Squad Teilo was among the first squads to drop pod assault onto the surface of Davion Primus. The mural on Telio’s kneepad depicts this assault, with the drop pods firing retros as the sky turned purple/red and untold horrors where unleashed on the population.

The Swords of Davion’s objective on Primus was simple. Relieve Davionic Imperial Guard units and small Astartes element that was barely holding the forces of chaos at bay, then evacuate as many military assets and members of the civilian population as possible.

Towards the end of the action, Astartes sold their lives dearly to buy more time. Every second they held allowed more material, men, women and children to evacuate from Primus and the sector at large. Owain, exiled and attempting to repent, readied himself to sell his life dearly for the sake of his people began marching, black sword aloft challenging the forces of chaos to face him.

It was Teilo, his squad ushering panicking civilians into the last thunderhawk, that realised what his old friend was about to do. With a clipped order his squad rushed forward, bolters blazing towards Owain’s position. Joined Owain at his position, fighting against an unstoppable horde pouring out of the warp rift, it was only when Owain relented to go with them that they fell back and escaped on the last shuttle to the fleet.

It was that moment they earnt their title. Squad Teilo. The last to leave.

40k Coda is cool and good or is he? Space Marines Swords Of Davion Tactical Squad