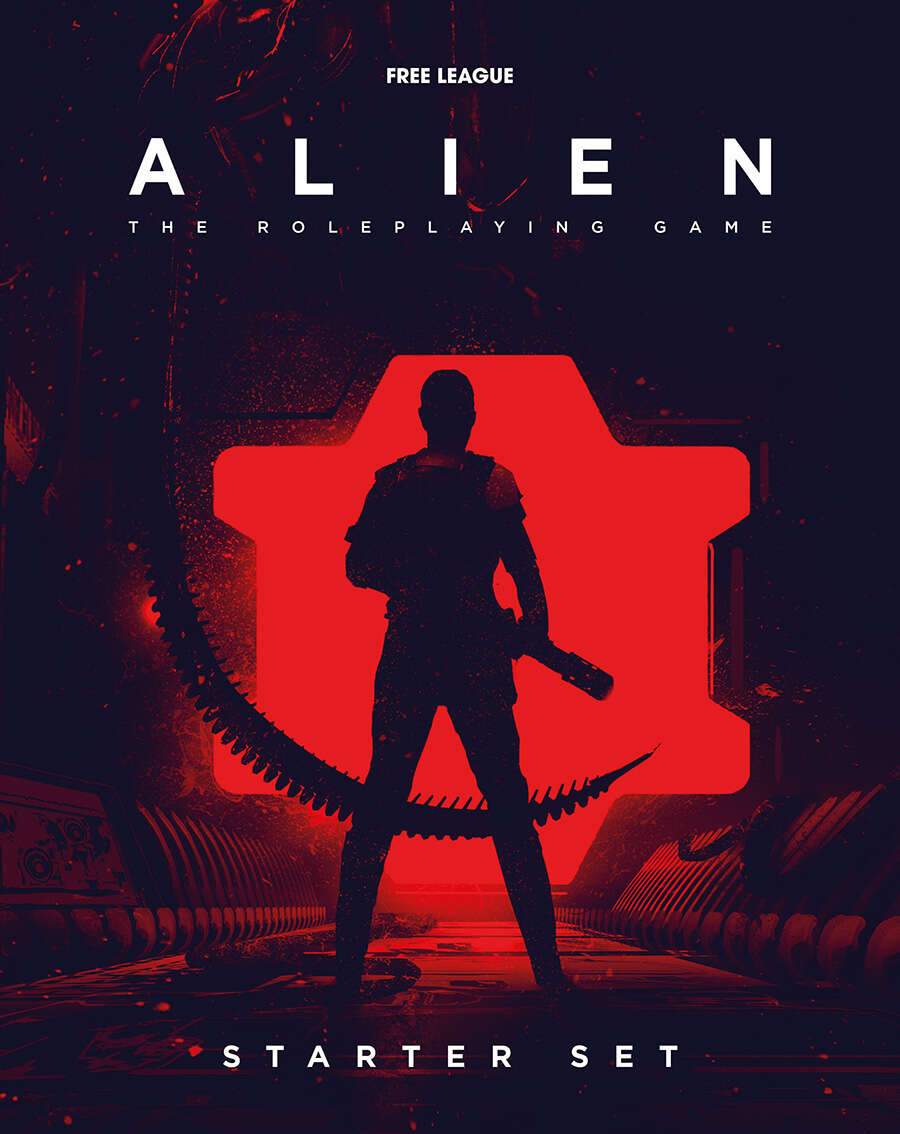 Monster horror can be tough to do on the tabletop. It’s tricky to capture the fear of the unknown when creatures are described via blocks of stats and text, and can be hard to build tension when you break to rattle dice every few minutes. Given that Ridley Scott’s Xenomorph is one of the most iconic horror monsters in cinema, Fria Ligen’s Alien RPG could have ended up consigned to the dustbin of licensed games had they been unable to capture the feel of these iconic movies. Fortunately, they nailed it.

The Alien RPG’s primary book is a nearly 400 page sourcebook that has the unenviable job of creating a cohesive RPG experience for a series of movies that are anything but cohesive. While Alien and Aliens are both iconic seminal films in their genres, they share little beyond the character Ripley. One is a sci-fi horror film with a slow burn of tension, pitting everyday humans against a nigh indestructible terror; the other is a popcorn 80s action flick where squads of Marines gun down the very same indestructible terrors with pulse rifles and Sonic Electronic Ball Breakers. How do you knit that together? By changing the entire structure of the RPG.

You can’t really review the Alien RPG as a system. As a system, it’s fine. Characters have 4 Attributes and 12 skills that will sound familiar to anyone whose played a sci-fi RPG. Resolution is handled by adding your Attribute and Skill Values together and rolling that many six-sided dice. A 6 on any of those dice is a Success, anything else is failure. It’s likely this RPG would have sold well if all Fria Ligen did was slap this system on the Alien Universe and call it a day. Instead they did two additional things: they mechanized Stress and created a Cinematic Mode of play.

The Stress your character is experiencing is represented by a Stress level that can rise and fall (mostly rise) throughout play. See an alien creature you’ve never seen? Stress is going up. Fight another player? Stress goes up. Fail a roll? You can opt to increase your stress and re-roll in a high-stakes moment of drama. As your Stress Level rises, however, you’ve got to add Stress Dice to your roll.

These are also d6s, however they’re a different color than your normal dice. These are rolled with the rest of your dice and like your normal dice a 6 also represents a Success. As the adrenaline starts pumping your character is a little stronger, a little faster, and a little sharper on the trigger. However, unlike your normal dice a roll of 1 on a Stress Die results in Panic. When this happens, another quick roll based on your Stress Level determines how bad you panic. At low levels of Stress this can be something minor but eventually your characters will snap, hurting themselves and others or even falling into catatonic shock.

Stress dice are also used in resource management. Rather than counting ammo or clips, gun ammo is tracked by how many “Reloads” you have left. Your gun has effectively unlimited ammunition, however any Panic triggered during Ranged Combat results in your character unloading whatever they’ve got into the nearest target and having to spend a turn reloading. Things like Air Supply in your spacesuits works similarly. While it does create situations where someone has ammo for days yet someone else runs out of air suspiciously quickly, such things are fairly common in the films that inspire this game and it works remarkably well from a dramatic perspective.

The Alien movies are not really about the Xenomorph. The alien horrors in these movies provide backdrop tension. They’re always there in the shadows ensuring that neither the characters nor the audience can relax, but the real antagonists of the story are the humans (or human lookalikes). Whether its Ian Holm as Ash the Synthetic, Paul Reiser as a Corporate Stooge, or Brian Glover as an egomaniacal prison warder, we are our own worst nightmare. This can be hard to reconcile in a traditional RPG format where all the players are ostensibly members of a party working together. The Alien RPG gets around this by structuring Cinematic Mode as a one-shot rather than as campaign play.

When you sit down to play an adventure in Cinematic Mode you should bring with you a different set of expectations than you normally would. You characters are not necessarily friends. You are not all working towards the same goal. Most of you will likely die—when a PC dies their player grabs any open NPC to picks right back up. The goal of a Cinematic Mode scenario is to create a compelling Alien story together, not to go off on deep space adventures. The sourcebook includes rules for Campaign Mode but honestly, I have no interest in a long running Alien Universe campaign and it isn’t where this game shines.

It shines in the Agenda system, in the 3-Act Structure, and in the way Stress Dice are added to your die pool steadily through a game giving you a tactical representation of your Character’s mental state. Cinematic Mode adventures are presented as 3-Act stories with each character given a unique Agenda for each Act. The Starter Set scenario, called Chariot of the Gods, is primarily a slow-burn horror adventure. Think of the original Alien Movie with a dash of Alien: Covenant sprinkled over the top.

The 3-Act structure drives each Cinematic adventure. The GM booklet provides the GM with a menu of events that can occur in each Act, with some designated as Mandatory. These tend to define the beginning and end of each Act and ensure that pivotal events that relate to character Agendas occur. In the original film, these mandatory events would be the crew waking to discover the distress signal coming from LV-426, a crew member (NPC or PC) becoming impregnated by the Facehugger, and the chest-bursting scene serving to transition from Act 1 to Act 2. Optional events might include ship damage or player conflict.

Along with GM events, each player receives an Agenda for the Act that should inform their actions. In Act 1, ship captain Dallas is driven by a desire to follow Weyland protocol. By Act 2 his priority is crew safety over his Weyland Mission. Unfortunately we don’t see Dallas in Act 3 but you could expect it to be something like a desire to save as many fellow crew members as possible even if it means sacrificing his own life.

Just like the films, these Agendas are going to put various players are cross-purposes. Ash does not want to kill the Alien and considers the crew expendable. If another crew member’s motivation is financial, an Ash-type character may be able to convince that player to go along with his plan to capture the Alien. By setting up the adventure as a series of Events and Agendas that conflict with each other, the Cinematic Mode scenarios free players up to let go of character-attachment and tell a cool story.

I have run Chariot of the Gods twice for different groups and it has played out dramatically differently based on the decisions those players have made and the events I chose as the GM. Moments of genuine surprise and betrayal emerged as players acted on their secret Agendas, rolls inflicted very real stress on my group as players gathered up a large handful of stress dice, character death was embraced as narratively appropriate.

As a system, it’d be hard to ask for more from the Alien RPG cinematic mode. It does a phenomenal job of melding a tonally disparate universe. You can play Chariot of the Gods and have an original Alien horror session, or you can grab Destroyer of Worlds where most PCs are Colonial Marines and enjoy an Aliens-style shoot em up. The system manages both with aplomb and even inexperienced roleplayers had a blast with this adventure.

The Starter Set comes with a lore-free condensed version of the rules, the Chariot of the Gods adventure (also available separately), custom Basic and Stress dice, and a bunch of character sheets, handouts, and maps. My only criticism of the Chariot of the Gods scenario is that it is not friendly to GMs who are new to the idea of running a game. The game puts a lot of work on the GM; they’ve got to run a number of NPCs to ensure there are options for player’s whose characters die, managing tempo and tension with the Event system can be tricky, and most of the rules are not prescriptive. For example, NPCs and Synthetics (Androids) do not mess with the Stress system in the same way as players; for example when it comes to running out of ammo, the rules simply say it happens when “dramatically appropriate”.

Similarly, combat for the Xenomorphs is not structured to be fair. A d6 roll tells you which attack the Alien performs and the consequence can be instant and immediate death. This is great from a narrative perspective, but can be a challenge to a GM who also needs to manage player expectations and experiences. The Starter Set does not offer much in the way of guidance for new-to-GMing GMs. It is difficult for me to recommend this Starter Set to folks brand-new to roleplaying. Despite the fact that Dungeons & Dragons is a much more mechanically complex gaming system than the Alien RPG, the 5th Edition Starter Set remains my gold standard recommendation for folks new to RPGs in general. It’s not that this would be bad per se, just that it might be a little challenging.

With that caveat aside, this system is outstanding. The mechanics are simple yet effective, and the Cinematic Mode empowers players to collaborate on an exciting Alien story. From the Stress mechanic to the rules for the Armat M4A1 Pulse Rifle, the Alien RPG weaves a patchwork of films together in a way that lets the table decide what kind of story they want to tell.

Special thanks to Fria Ligen for providing a review copy.