Taking the First Steps: One Woman’s reluctant quest into the realm of miniature wargaming 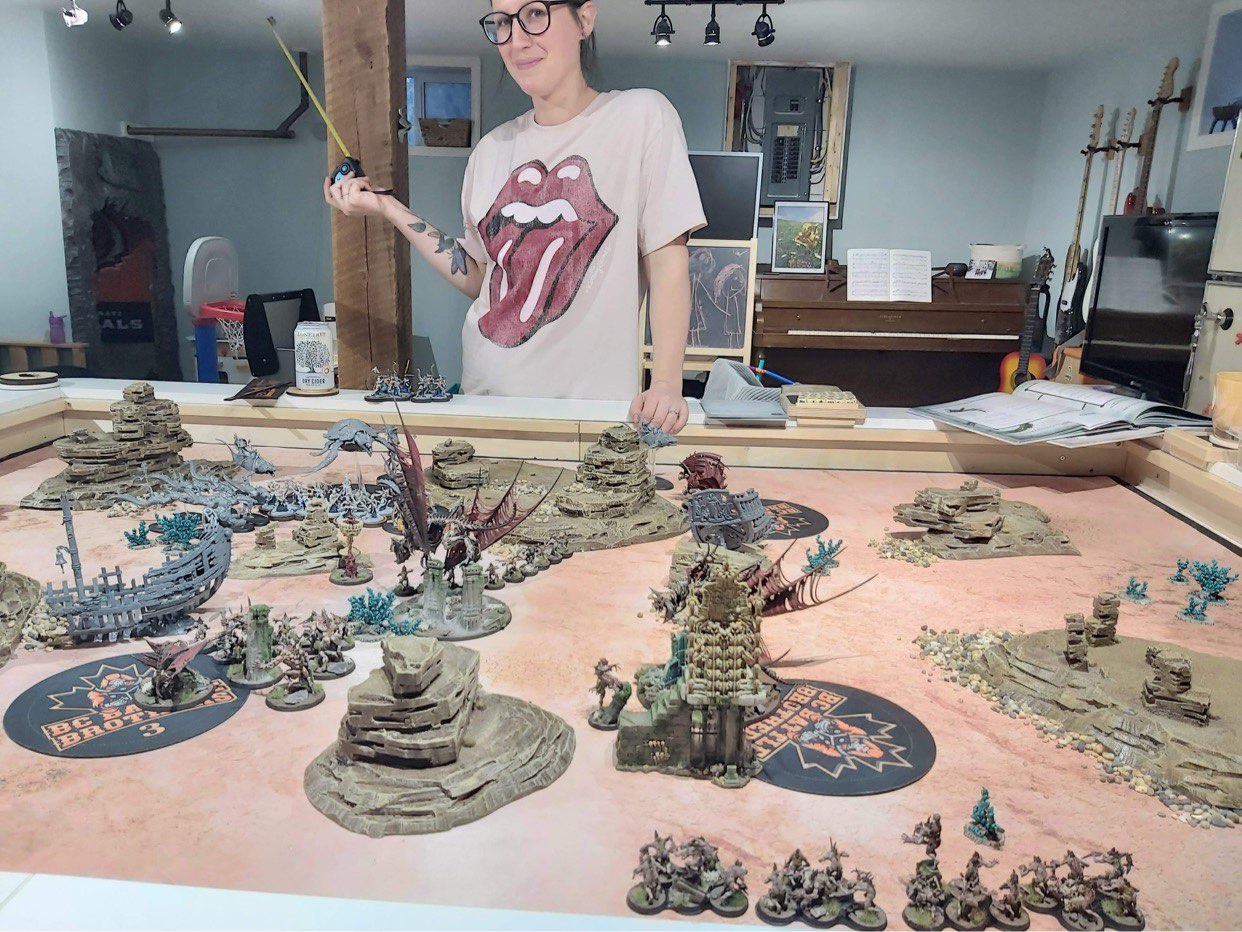 We recently wrote about methods to introduce your significant other to Warhammer. In today’s column, Nicole Obre talks about being one such SO and her experience coming into Warhammer: Age of Sigmar.

Well, shit. My husband won. He finally did it. He got me into the insane world of Warhammer. Like, really into it. Like, picked out and purchased an entire 2,000-point Age of Sigmar army. Idoneth Deepkin, in case you were wondering. Spent many frustrating hours putting said army together and am now in the process of painting it. As a newbie, I’m obviously doing a pretty mediocre job, and it will likely take me roughly 84 years to complete it. But I’m doing it. And I’m liking it. Even crazier? I think I like playing the game itself. 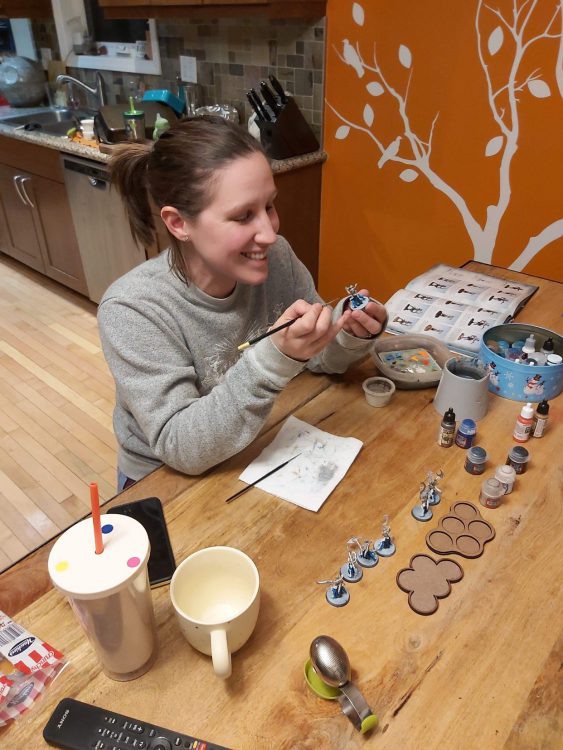 Let’s go back in time for a minute. Waaaaaaaay back. When I first met Dayton (the previously mentioned husband), I’d never watched a single game of football in my life. And now I’m a diehard Cincinnati Bengals fan. Yes, I did choose them for the tiger stripes. And yes, I will gratefully accept your condolences. Clearly, he’s a persuasive and persistent guy, and he wants me to love everything he loves. But Warhammer has always been the one thing that was just Dayton’s. And I was fine with that. It’s OK to have a hobby that you love and your spouse does not. Not all of our interests have to be mutual. At least that’s what I told him. Over and over and over again.

Of course, he never gave up. We played a handful of games over the years, but they were all the same. Dayton set everything up, laid out an overwhelming number of things for me to reference, and I half-assed my way through it. I didn’t really understand the rules, the background, or the point. Fantasy was never my first genre of choice, and to be fair, I probably didn’t give it a chance. It was hard to focus on any of the missions or objectives when I didn’t necessarily care about why I was fighting, or what I was fighting for. Killing things just for the sake of killing things wasn’t my jam.

Don’t get me wrong, I love boardgames. We have an aggressively large collection of them. But Warhammer is a horse of a different colour. A horse of a totally different wacky intense breed, really. The whole assembly and painting process was daunting, the games were long, and there were so many damn rules to keep track of. I had zero desire to play anyone other than my husband once a year or so to placate him. The idea of playing multiple games a day in a tournament setting honestly seemed like torture.

As Dayton got more involved in the hobby – going to tournaments regularly, busting out army after army, even starting his own Age of Sigmar podcast – I went along for the ride. I was happy to play the part of the supportive wife. Travelling for tournaments was fun, the people met along the way were awesome, and editing the podcast was right up my alley as a former journalist.

But Dayton’s enthusiasm for all of it was annoyingly contagious. So, he tried again. He started smaller and smarter this time. I read a couple books from the Horus Heresy series, and the storyline was cool. Against my many protests, Warhamnmer podcasts were played on family roadtrips. Knowing your target audience is key here. If you can sneak in a laugh or two while talking about the latest warscrolls, you definitely stand a better chance of keeping my attention. With my already solidified love for boardgames, Underworlds and Warcry started showing up on the table for game night more often. Dayton led myself and few other friends through a campaign of Warhammer Quest and we all had a blast. I was even coerced into entering an Underworlds tournament at LVO a few years ago. I played horribly, but it was still an undeniably good time.

It’s all about the baby steps. A full game of 40k or AOS is intimidating as all hell. Wife or not, start anyone brand new with a smaller game that’s within the Warhammer universe. Draw them in with the lore, show them the pretty-pretty models. Then it’s safe to gently, ever so gently, throw them into full-on tabletop wargaming.

For me, Age of Sigmar was an easier next step. I had to admit that the stories were fascinating, and the models were beautiful. What can I say, I have a thing for elves and animals. With Idoneth Deepkin, I got to include eels, sharks, badass seahorses, and massive turtles, plus a bunch of soulless elves. It was giving me all the under the sea vibes I never knew I needed. I was talked into ordering an army. When I say “talked into,” I mean “Dayton created a list for me (at least one turtle was my only request) and giddily ordered everything.” He was extremely careful not to mention exactly how much it all cost. And here comes my biggest hot tip: Don’t let your wife know how ridiculously expensive Warhammer is.

Now I’m not suggesting you lie or keep things from your wife, ever. EVER! Just maybe don’t mention prices unless you’re asked point blank. Avoid, deflect, skirt around those details as best as you can. Because if she knows exactly how much you’ve been spending on these tiny plastic toys, you’re most likely well and truly fucked. She’s not getting any for herself and you’re certainly not getting any more. Nobody’s. Getting. Any. You’ve got to fully sell her on these things before you show her the receipts. Help her start assembling and painting, have a few enjoyable games before you talk dollars. Or better yet, let her live in a state of self-inflicted naiveté like I do. Provided we can still feed our family and pay our bills, I don’t ask how much of our budget is going directly into Games Workshop’s massive pockets.

With my very own army to start giving a shit about, it was time to fully commit. I poured myself a generous glass of wine one evening and sat down to begin assembling. Immediate takeways: My complete lack of coordination led to one good slicing open of my thumb with an exacto knife, tons of teeny-tiny pieces dropped on the floor, and many more glasses of wine poured. Eventually I got the hang of it, and after a couple weeks I had a rad looking crew of sea elves (sorry GW, aelves). Looking back, I have to admit the assembly process was actually pretty fun, not to mention foolproof. Follow the instructions, keep fingers clear of sharp objects, throw on some tunes or tv for background noise, and you have yourself a pleasant evening.

Now that I’m dipping my toe into painting these miniature sons-of-bitches, I’m realizing this is going to be a struggle. I have some very bold and bright ideas for how I want my army to look, but executing them is another story. Visual art is not my forte. I work with small children, so if we’re talking fingerpainting and popsicle stick crafts, I’m your girl. Dry brushing and edge highlighting, not so much. Though there’s no greater motivation to paint – and of course re-paint over my mistakes multiple times – than putting those models out on a table unpainted.

Which brings me back to playing the game of Age of Sigmar. It was time to hit the table with my army, and I managed to fumble my way through a game. Honestly, I still felt pretty lost. But after a couple more rounds against Dayton, I started to remember a few things without looking down at my battletome. At that point it was probably time to play someone I wasn’t married to, so I spent an evening frantically studying my warscrolls for my next match. Five minutes in, all of that information disappeared from my brain, and by the end of it, I felt like I didn’t even know what numbers were anymore. Thankfully my very patient opponent was happy to remind me about all of the re-rolls and Command Ppoints I missed. Beverages and laughs were had, so I’m still calling it a success.

What was becoming clearer to me was that I was never really going to get to know the game by reading about it. I had to play it. Over and over and over again.

It turns out, once you have a basic understanding of it and at least half a dozen games under your belt, Age of Sigmar is pretty kick-ass. Getting the mechanics down was a giant stumbling block for me, but I’m glad I awkwardly leapt over that hurdle.

It took a few years, and I’ve got a long way to go, but I’m having actual fun playing Warhammer. Let’s be real, I’ll probably never remember all of the rules (please don’t ask me how Battleshock tests work). But I’m getting to know my army. I’m rolling dice with slightly more confidence than I started with. I’m sitting down, by choice, every now and again to hobby. And I’m asking to play instead of being convinced to. Honestly, what more could my husband ask of me?  I mean plenty, but let’s not give him any ideas.

So, there you have it fellas, it can be done. The non-believer can turn into the wife who googles things like “how to paint miniature skin without crying.” She may one day turn to you and unironically ask if you want to throw down a game of AOS after the kids go to bed. It is possible, with much patience and perseverance, to get her on board with this completely excessive and expensive hobby.

To be clear, there are plenty of women out there absolutely crushing it at Warhammer – no husbands’ help required or requested. But this wacky world could certainly stand to see a few more females. The more ladies we can get to turn up at tournaments, the more welcome we’ll all feel. The more we encourage each other to share what we’re working on at our hobby tables, the more diverse and colourful our social media feeds will be. The more we can get significant others to understand why their partners are so gaga about Warhammer, the better for all of our marriages. So, if your wife/girlfriend/partner-in-crime still needs a little convincing, give it one more go. Find a new angle to entice her down the very strange rabbit hole. Your 33rd time might just be the charm.