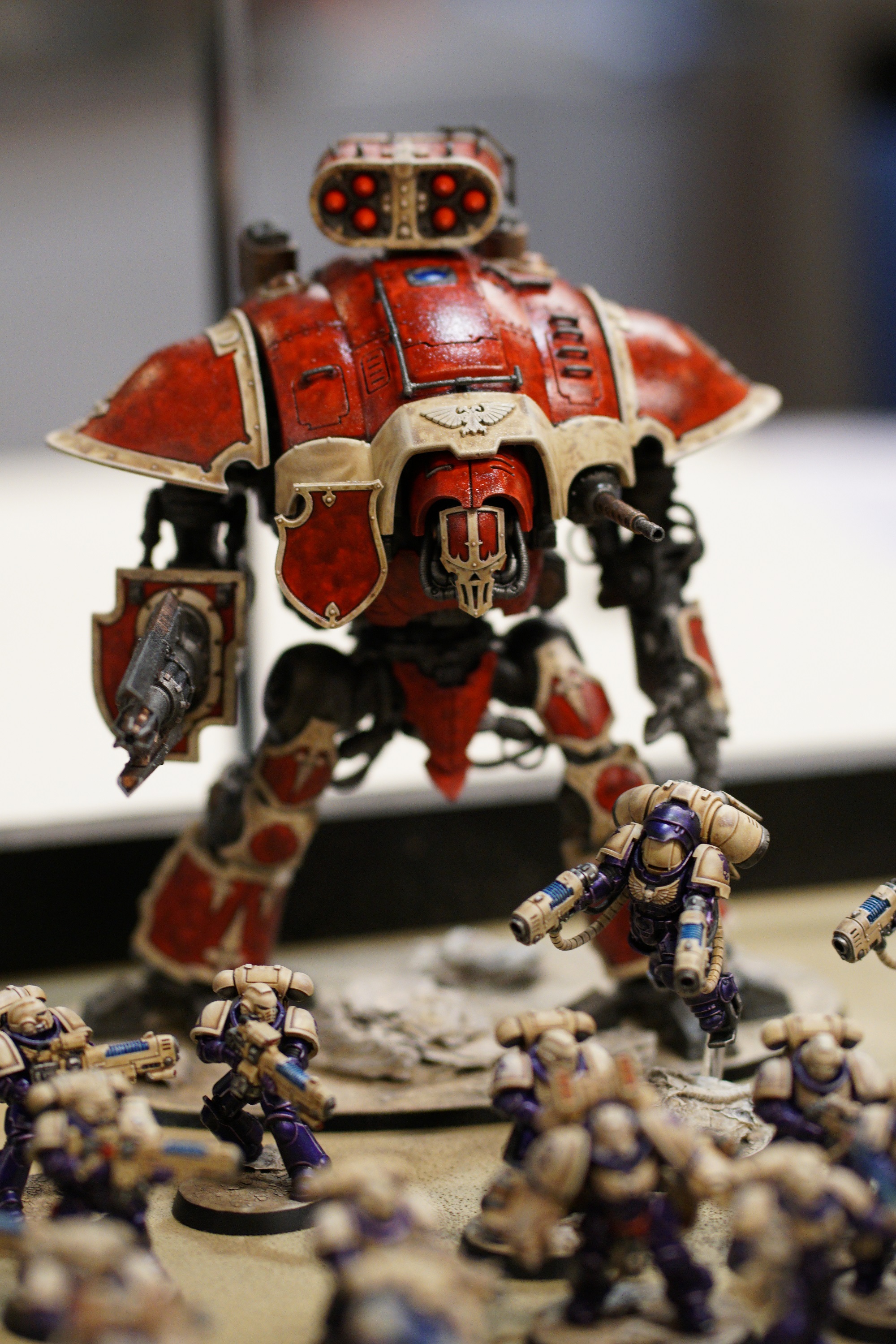 At the beginning of the year I made a resolution to paint for an hour per day. I had a ton of Primaris models that I wanted to work on, I had a fun color scheme, and most importantly I really wanted to commit towards getting an army done. Around March I signed up for NOVA and made a commitment to paint enough models to deliver 2500 points and play in every possible narrative event. And I did it! 1000 points of Primaris (Regal Skulls) accompanied by 1500 points of Imperial Knights (Sanguine Lance), including a 3D printed Las-Impulsor so I could have a Preceptor. I burned through a ton of hours getting everything painted, and as a result I pretty much took off all of September. Now that things have died down a bit I’ve decided to get back into painting and maintain the momentum needed to finish my resolution and have another army to play with. In Service to the Omnissiah

I wanted to field something that was complementary to my Primaris and Imperial Knights that also gave me an opportunity to push my comfort level a bit and possibly experiment with free-hand painting and some other challenges. Since I have the Forgebane and Kill Team boxed sets it seemed logical to put together an AdMech force. They’ll be a cheap source of command points, they can repair the Knights, and it gives me a chance to play with a different color palette.

I’ll admit, I’m not much of a lore guy. The Regal Skulls ended up being an experimental Chapter created by Guilliman as a way to test his assumptions regarding battle by creating a force that leveraged the experiences of the Deathwatch and had more doctrinal flexibility than most legions. The Sanguine Lance was crafted as a means of providing a home for Freelancers and Nobles that had lost their Knights or the logistical chain required to maintain them. I genuinely have no idea what the lore will be for the AdMech (or even their name), just that they will be blue and bone and sit on desert bases to match the other models in my army. If you look on the Primaris models you’ll see a really vibrant blue on the power weapon produced by layers of Liquitex Inks! Pthalocyanine Blue. I hope to have a similarly vibrant blue on the cloaks of the AdMech.

This will be both the easiest and hardest month for me. Easiest in the sense that I already know what I’ll paint; the Dominus and a 5 man Ranger squad with a Transuranic Arquebus. The hard part will be determining the color scheme and final configuration; I’m extremely slow when I’m in my “WTF do I do?” phase and on top of that these models have a lot of fabric and opportunities for freehanding. I suck at freehanding and actively try to avoid it, but I also want to use this as an opportunity to improve. So we’ll see how much of a masochist I am.

We’re wrapping up a patrol with another squad of Rangers and then… something else. I’m leaning towards heavy support, like an Onager Dunecrawler or a Kastellan Robot. The Kastellans are particularly interesting because I have an idea to match the metallic effect on the Primaris in a blue shade instead of purple. That might result in a really cool effect that complements the rest of the army while still setting them apart.

I’ll likely kitbash an Enginseer out of slightly over two decades of accumulated bits. The other unit might be a Cybernetica Datasmith (which I suppose could also easily be a proxy for an Enginseer), or maybe I’ll do the Datasmith in Month 2 and the two Kastellans in Month 3, or a 5 man Troop squad.

The final month is for a third Troop squad, which at the moment I’m thinking will be a unit of Skiitari Vanguard. I have no clue what else to add. Maybe an assassin. They look like fun.