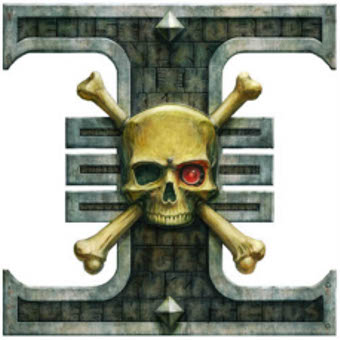 My faction for the Tale is the Inquisition, I let lady/lord/mutant luck decide the particular arm of the Inquisition and the political leaning of their leader. Thanks to a 3 on a D3 and a 2 on a D2 I’ve ended up with a radical Ordo Xenos (Alien Hunters) Inquisitor and all the baggage that entails.

Being a radical Inquisitor means that he’ll be able to enlist the use of enslaved aliens, mutants and hybrids along with everything else the Inquisition can get their hands on (pretty much everything Imperium). Inquisitor Gaiden Lubrecht of the Ordo Xenos, being radical in his approach can be considered absolutely ruthless in his approach to getting the job done. Nothing is ruled out when it comes to exercising the will of the Emperor, even if that means using the weapons, minds and even corpses of xenos filth to achieve it.

Gaiden Lubrecht’s personal entourage consists of five individuals, some loyal, others there against their will. A former heavy weapons expert for the 86th Deltic Dragons regiment, a regiment that was often called upon by the Imperium when cooperation with the Tau Empire was required. After a fatal near-injury involving an overcharged plasma gun, Gaiden Lubrecht had his finest surgeons reconstruct Alaris as best they could but after losing part of his skull in the plasma explosion extensive surgery was required to his brain. Gaiden used the opportunity to install a cybernetic implant that would enable him to ensure 100% loyalty from Alaris, and give him access to the former guardsmens full knowledge of the Imperium’s prior dealings with the Tau empire as well as his familiarity with their doctrines. The Nameless One (Acolyte)

Captured on the world Vigilus, The Nameless One, an abomination of the purity of humanity with the taint of the alien classified as a late generation Genestealer Hybrid using imperial designations. Being a late stage Hybrid Metamorph, the nameless one has a strong psychic link to the Tyranid Hive Mind, so strong that Gaiden uses the enslaved xenos to embolden his own psychic abilities. For obvious reasons the beast is kept bound but is still able to inflict a lot of damage any one foolish enough to get too close. Little is known about YK14-Zeta other than he has been enlisted from the now traitor Forge World of Crucible Omega. Beside’s eliciting some oddly chaotic behaviours occasionally, YK will not interact with his fellow comrades, and only seems to commune with Gaiden in private. Strom is an abhuman, an unusually large abhuman at that. What he makes up for in height and muscle he lacks in wit and charisma, preferring to bash aliens in the head with his overly large boltgun than converse. However for someone so lacking intelligence his distrust of his fellow acoloytes may not be so misplaced.

Strom is armed with a (big) Condemnor Boltgun that also counts as a Power Weapon due to how hard he hits with it. Bill’Tan is the most recent recruit to Gaiden’s team, while they wear the armour of the Tempestus Scions, something doesn’t smell quite right, especially not to Strom, who this time is not the cause of the odour. Besides the odour, Bill has a really odd accent and has an obsession with dying races. Bill’Tan nearly always wears a hood, but on the odd occasion they’ve been seen hoodless (often via a shadow or silhouette) there’s something that really sticks out. For their first mission, Gaiden and his loyal bodyguards will be enlisting the help of the Deathwatch in order to make up a Troops choice and in the following month a Librarian (Magnus) and Dreadnought (Gravian) Chief Librarian of the 3rd Company of the Blood Ravens. Magnus has an obsession with tainted artifacts, it’s as if they call to him at a psychic level.