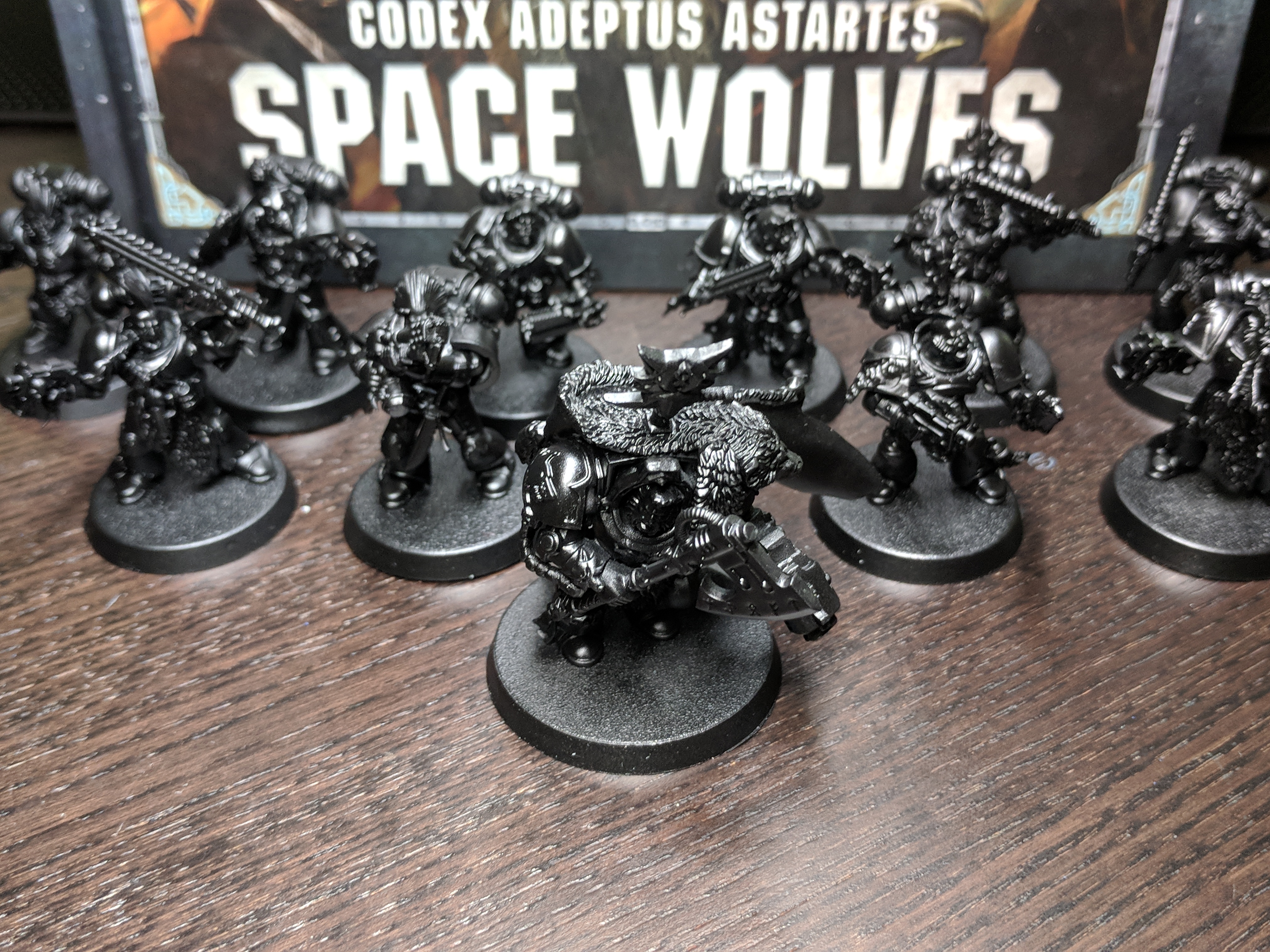 So here we are at the start of the race and I’m already switching things up. My original plan (which you can read here) was to start with an HQ for each half of the force, then build out to two patrols in month two. On reflection, I’ve decided to make two changes to the way I’m tackling this. The first change came when I was digging through my pile of boxes searching for some bits for another project. I had originally planned to have Strike Force Tannhäuser, a mainly Primaris detachment of Dark Angels, be led by a Primaris Master in Gravis Armor, but when I was digging through the kits I had laying around, I came up with this: 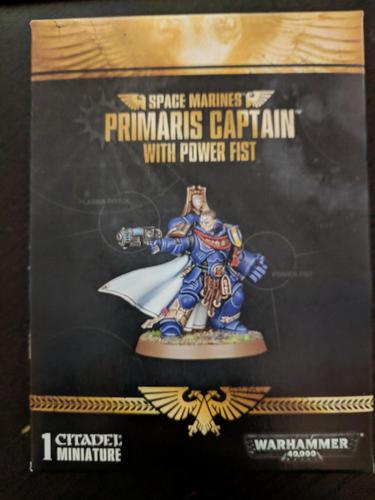 He’s going to be a Dark Angels Primaris Master, so I figure I have to go with the model that can take the plasma pistol. I swapped out the head and the decoration on top of the backpack for something a bit more on-brand, and Master Carolex is ready to go alongside his opposite number, Wolf Lord Hrólfr Gunnarsson, who takes to the field in terminator armor with a frost axe and storm bolter. 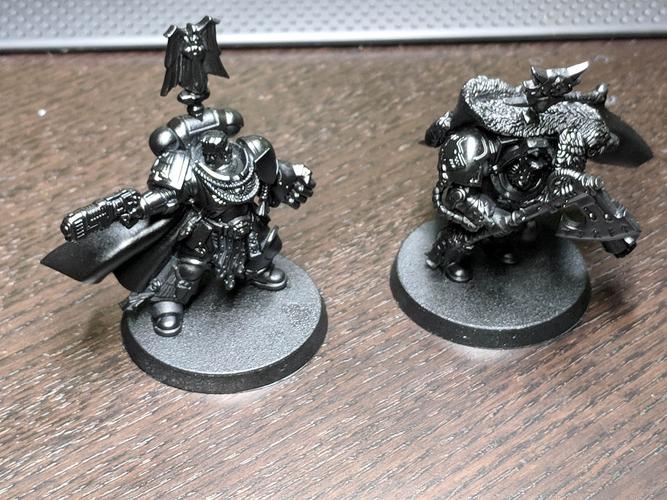 Good Lord I need to build a photo booth already

The models for my two HQs now being assembled and primed, I took another minute to make sure this was how I wanted to attack this. The rest of my plan sounded great when I wrote it, but then I thought through the implications: it would mean two models in October followed by anywhere from 10-25 for November alone, depending on how ambitious I wanted to get. While HQs are more detailed and demand more time per model than your average footslogger (from me at least), I figure I’d still have to wrap both HQs about halfway through the month and move directly into Troops if I wanted to have any chance of finishing November anywhere near on time. Being a relatively slow painter, I figured a change in schedule was in order. Instead of starting with both HQs, I’m going to shoot for a patrol a month for the first two months. I’ll probably wind up behind schedule anyway, but at least this way I’m likely to have more than 1.5 completed models to show for my trouble.

So the question is: who’s first? Since I’m planning on making the Wolf Lord my Warlord, I decided I’d give him the honors. Fortunately, I had thought (and bought) a few months ahead and had the plastic to put together a Space Wolves troops choice. To start, I’ve chosen a Blood Claws Pack: 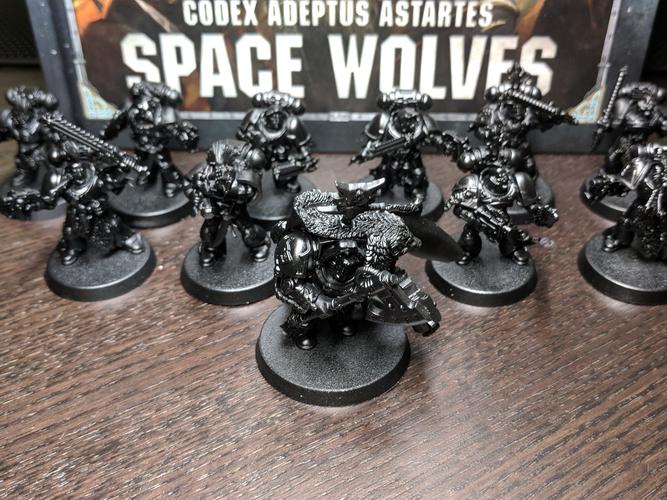 I’ve taken a plasma pistol and a flamer, and the Pack Leader is toting a power sword. I’m hoping I’ll be able to push through these by the end of October, though if my usual rate of work is any indicator it might be close. Here’s hoping.

On a closing note, during month zero, I played around with some Intercessors to get the basics of the color scheme down. I haven’t gotten the highlights on yet, but here are a couple WIP shots with the bases blocked in and some basic shading done: 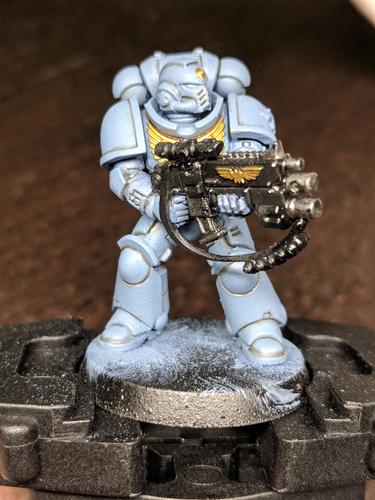 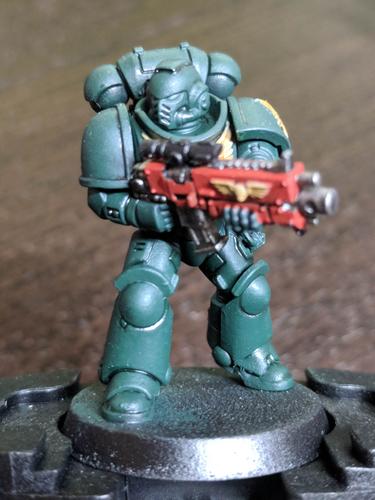 Hmm. Maybe my Month 0 time would have been better spent building a goddamn photo booth. I swear the green looks better in person.

I’ll try to move some work in on these guys as I go along, but I’m going to try to focus on getting the more flavorful aspects of the army done, since that’s really the point of this whole exercise, right? At the very least I’ve gotten a feel for the main colors I’m working with here, so with any luck this should go relatively painlessly from here on out.

Feel free to remind me of my youthful optimism when I’m stressing out about this a few months down the road.