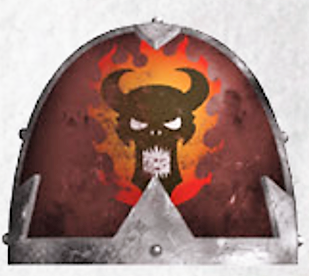 Before I start working on my Word Bearers army for the Tale of Goony Gamers project. I wanted to take a few minutes to do some basic concept work. I already have 6 other Chaos Space Marine armies and of those, the Black Legion are the competitive one, so building Word Bearers will be much more about making a thematic army that looks good in a display and will make for the occasional fun game.

Background: Why Word Bearers?
I love Chaos. Chaos Space Marines were my first army — Night Lords specifically — and I fell in love with the army the moment I started playing 40k, which was right after the 2nd edition Codex: Chaos was released. Over the years I’d continue to work on my Night Lords and eventually start an army of Iron Warriors. Then, in 2002, following a series of articles called Index Astartes, the second 3rd edition Chaos Codex was released, detailing rules for every legion. It was followed shortly after in 2003 by Codex: Eye of Terror, a book detailing the global campaign and new armies for Abaddon’s 13th Black Crusade. It was around this time I saw a sweet set of tournament armies (sadly, I don’t have links) where nine friends had formed a team where each brought one legion as part of a massive display board of Abaddon’s 13th black crusade, featuring all nine traitor legions. It was awesome, and I decided I’d do the same and build one army for each Chaos legion.

So long story short, I’m working on all nine legions. I already have Black Legion, Night Lords, Iron Warriors, World Eaters, Death Guard, and Thousand Sons done to varying degrees, and that leaves me with Emperor’s Children, Word Bearers, and Alpha Legion. Of those, I thought Word Bearers would be most fun to do next, since they have some of the coolest 30k models.

As I do these, I try to avoid overlap between my armies, making each one work to fill a sort of tactical niche. As such, let’s see what we’re working with for Word Bearers… 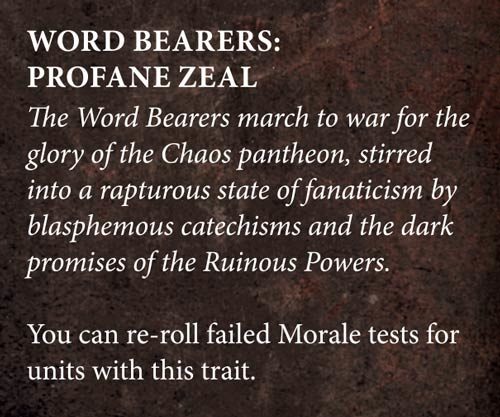 …well, shit. That’s not good. As it turns out, the real benefit I’m going to be working around as I build this army will be summoning. Specifically, the Dark Pact Stratagem: 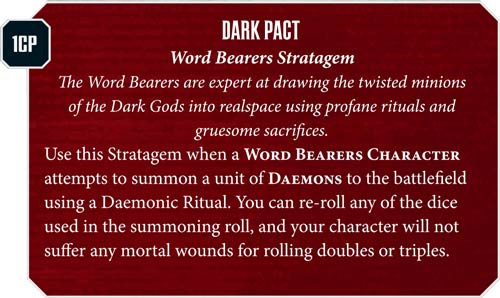 I’ve already got a lot of daemons, but that gives me an excuse to keep painting more, and to paint lots of wacky characters to summon them. I’m also likely to paint up a bunch of possessed, because Word Bearers are known for having those, and because the Gal Vorbak are extremely cool-looking models and I’ve wanted to paint them up for a while now. Between those three aspects, plus the religious angle, that should give me a lot of cool conversion opportunities to think about. So let’s hit the drawing board.

One of the coolest parts of the 2nd edition Chaos Codex is the two-page spread by John Blanche showing off visual concepts and conversion ideas for Chaos Space marines, with ideas for each chapter. I’ve come back to these pages over and over again through the years, and there’s always something new to consider with these images that I hadn’t considered. 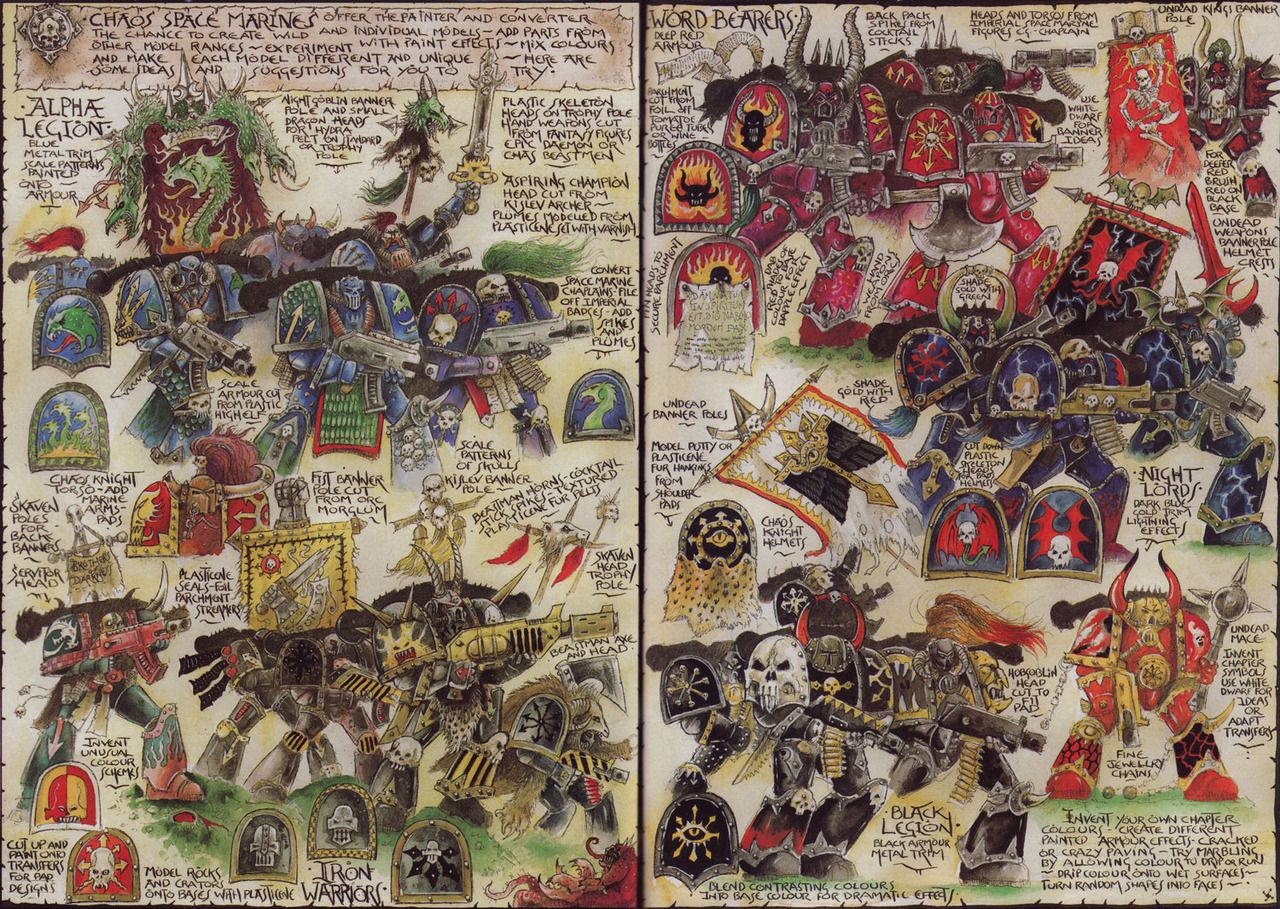 I figured I’d do some of the same for my army, sketching up a few basic concepts that I want to try and cover as I build them, and also get a feel for some of the general aesthetic choices I’m going to be making. In the tradition of my other armies, I’ll be using a 2nd edition color scheme for my word bearers, which means they’ll be deep red with bluish cabling and metal trim, though I may or may not paint the raptors gray like the Ashen Circle. I’m definitely planning to incorporate more than a few 30k elements into this army. 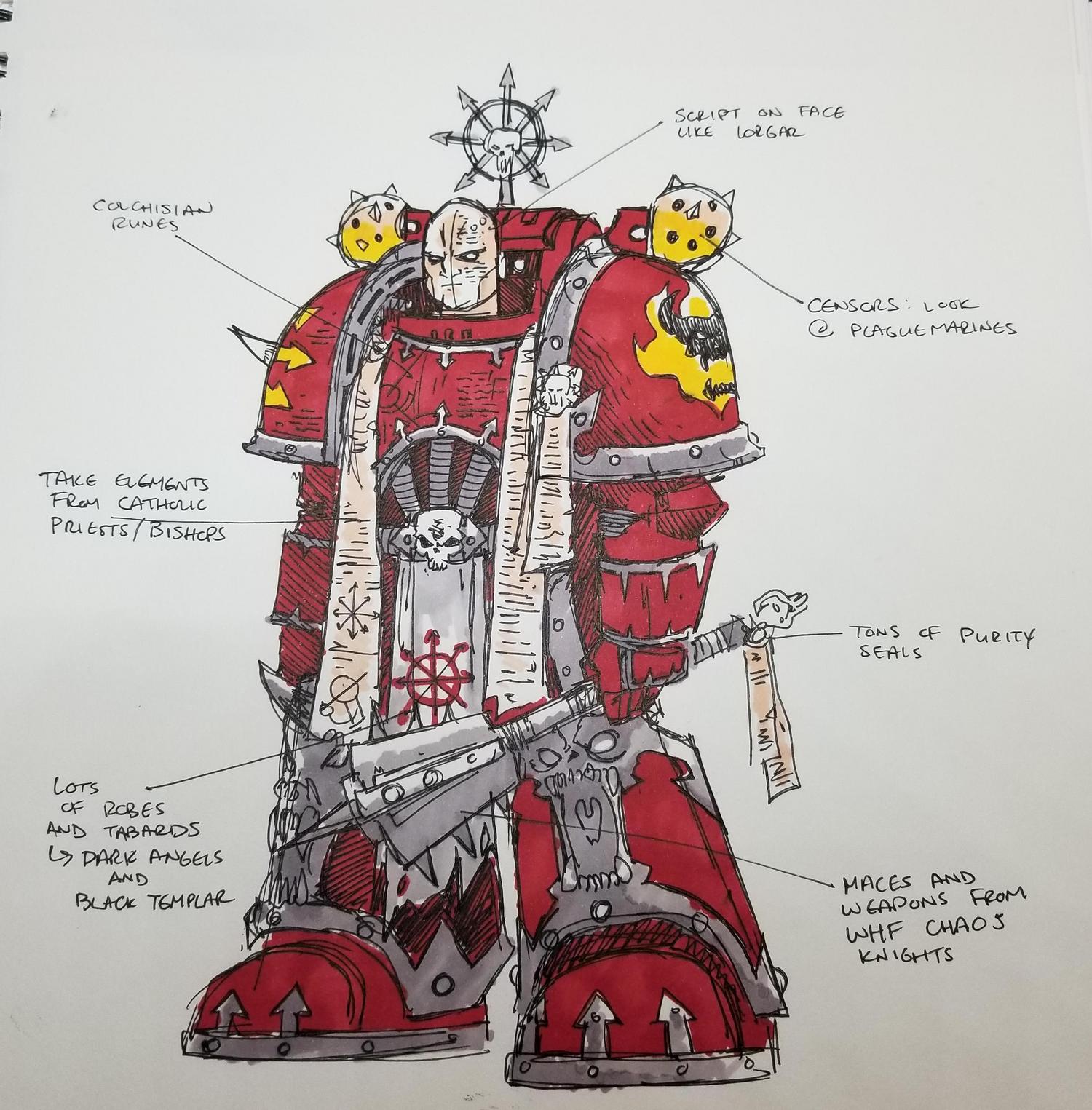 Generally speaking, I’ll be using a lot of purity seals, tabards, and shreds of cloth hanging off my guys, plus painted Colchisian runes and script on armor and skin where it makes sense to do so. I’m also planning to use a lot more maces, power mauls, and morning stars, most of which I’ll probably pull from fantasy/AoS chaos warrior kits. My sculpting skills are shit, but I’m good enough to make purity seals and strips of cloth when I need to. 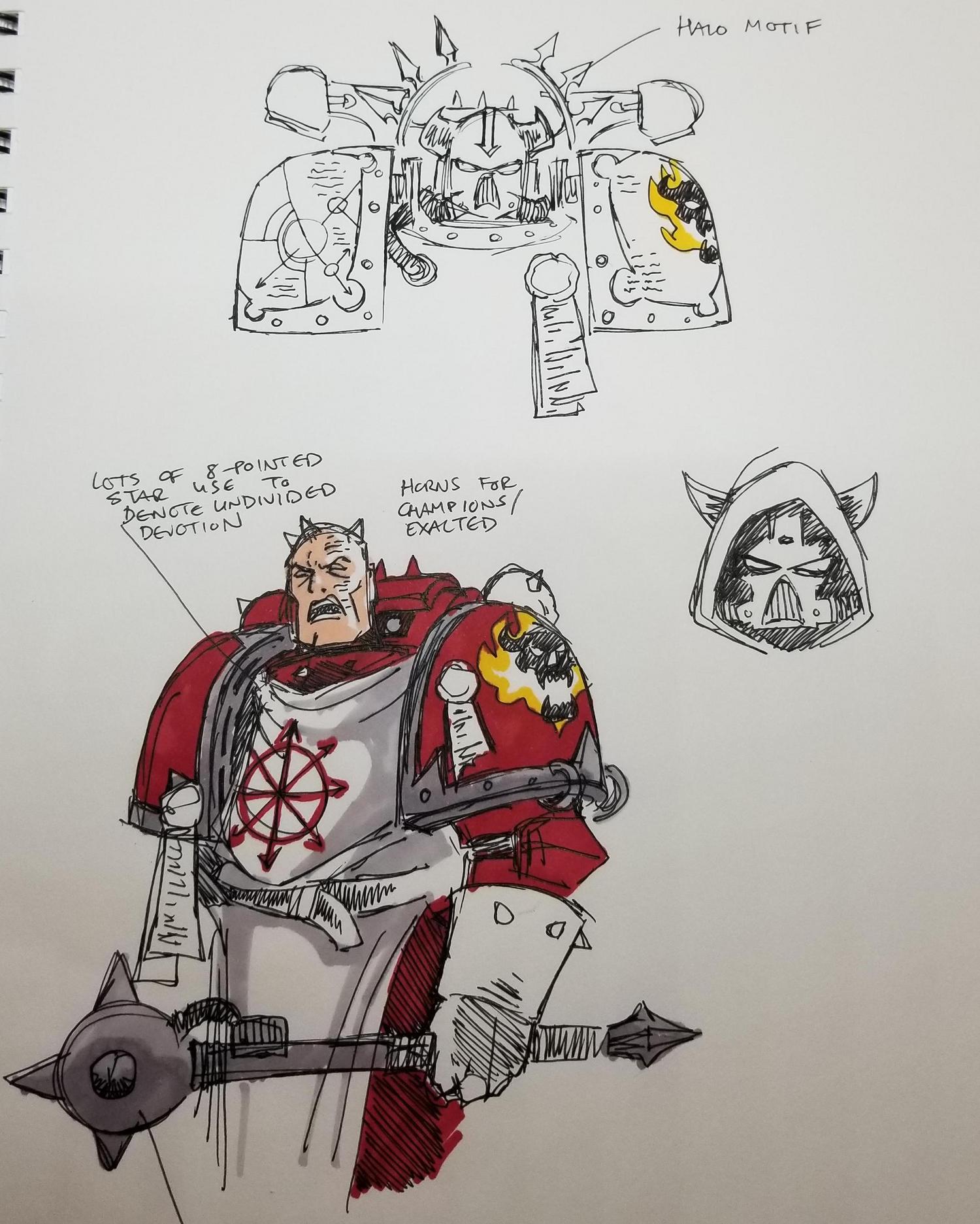 I also plan to use a lot of dark angels and black templar bits where I can, since those have tabards, robes, hoods, and seals to spare, and should help me get the look I want, provided I use the parts that are a little less obvious with their chapter symbols. I’ll incorporate halo imagery where I can. 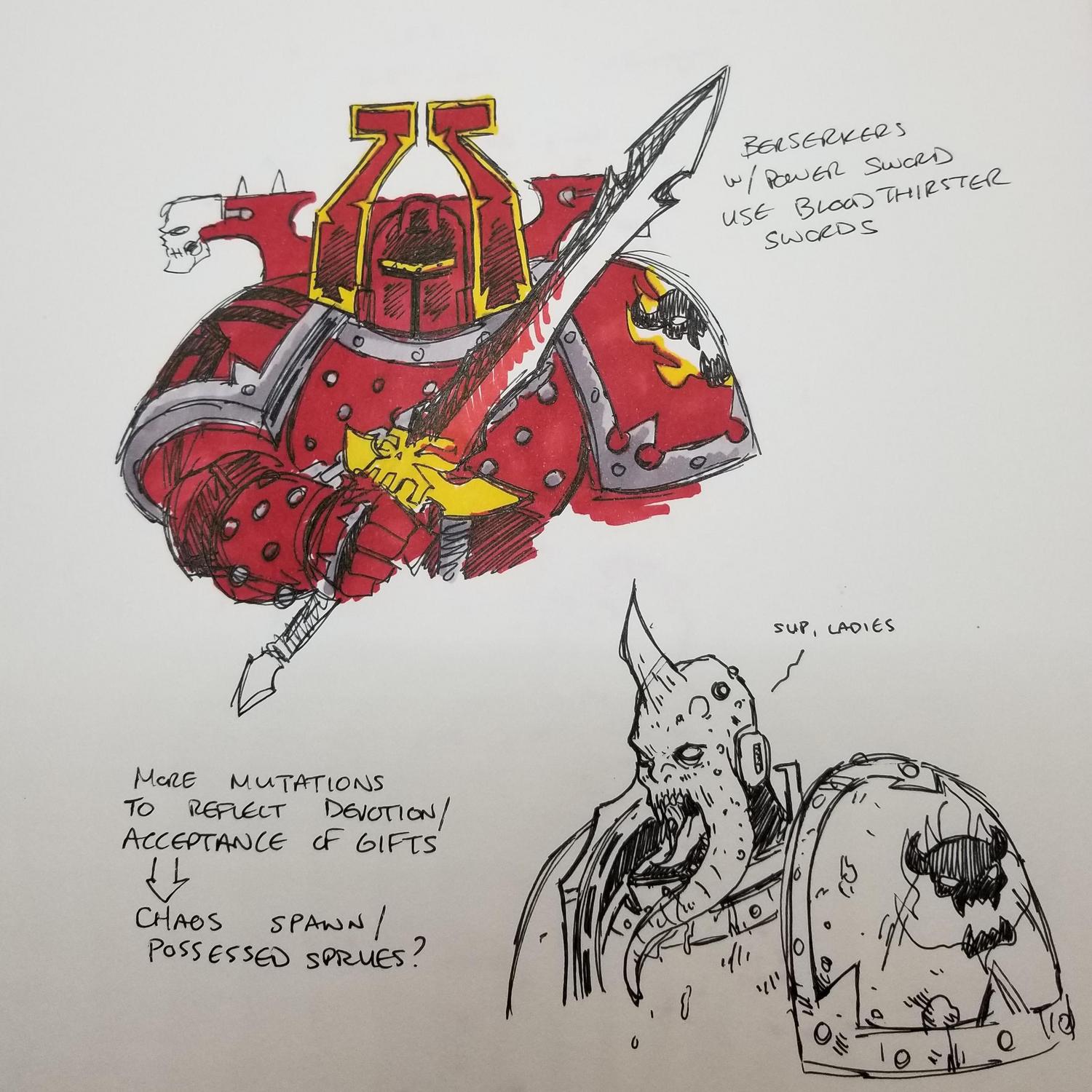 The Word Bearers strike me as an army that reveres daemons and sees mutations as “gifts” from the Chaos gods. Visually, I’ll incorporate this a few different ways. The first is that I’ll likely give more mutations to top-ranking models in my army, with horns at the very least but probably possessed bits for the more transformed and aspiring champions. The second is that I”ll use more daemon bitz to show the interplay. So for say, Berserkers, I’ll give the champion a bloodletter sword instead of a standard power sword to visually show how the Word Bearers use daemon gifts they’ve received from the dark gods. 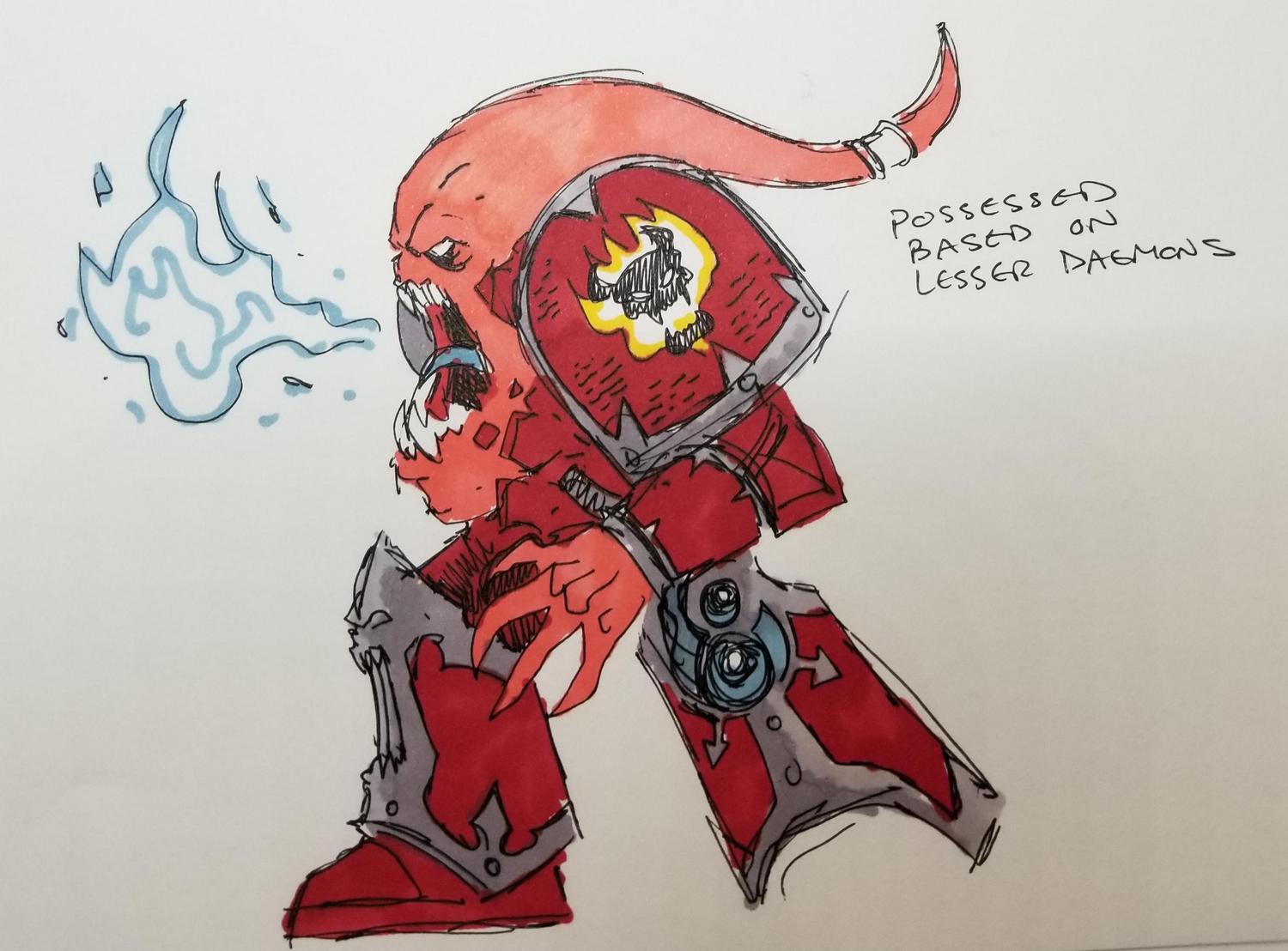 I’m also planning to do more possessed, and as I do those, I plan to try and incorporate more existing daemons to show marines possessed by specific daemon types, such as this poor bastard who was possessed by a pink horror. I think this will be cool conceptually, but a pain in the ass to model. Still, worth doing once or twice just to break up the monotony of Gal Vorbak/Possessed models if I want to do larger squads of them.

That about wraps up my conceptual work; the next step is doing a test model or two to see how the scheme paints up and figure out the steps to producing it. That shouldn’t be too hard, but I’ll likely wait until after October 1st and the official start to make that post.