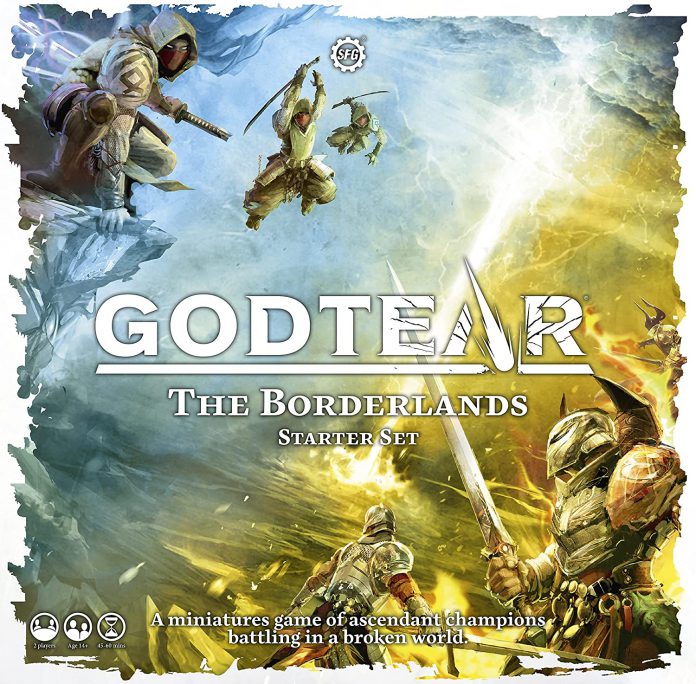 Way back in 2017, a year that feels more like it was 50 years ago and not 5, Steamforge Games announced a new miniatures skirmish game called Godtear. As details emerged it became clear that it was a sharp departure from their previous success Guild Ball. Played on a hex-based board with character focused team composition, it seemed as if Godtear was a MOBA-adjacent entry into the miniatures skirmish board game category.

And thus I completely ignored it.

Not because I don’t love the genre, because I do love it. Games like Warhammer: Underworlds and Unmatched have emerged as successful crowdpleasers, taking the tactical joy of pushing miniatures around and stripping away a lot of the rules and complexity that comes with a wargame.

The thing with Godtear then was that I simply had my table full. Periodic Underworlds releases, regular Unmatched expansions, even Guild Ball itself were all rotating through my queue and so I simply noted the upcoming Kickstarter and went on my way.

And thus I missed an absolutely killer game.

Battle for the Tear

Games of Godtear are played between two players each controlling Champions and their retinue of Followers. The Champions are powerful fighters building influence in a broken world hunting for Godtears, shards of the gods who abandoned the world. The hope is to gain control of these Tears and ascende themselves to godhood.

This battle takes place on a large board full of hexes, scattered with Objective Hexes defined by the chosen scenario. In some scenarios these Objective Hexes will be plentiful and come off the board round by round, tightening the action. In others it’ll be the opposite and tactical positioning with the purpose of long-term benefit emerges. Others still will see the player trailing given the opportunity to move hexes around. The scenario chosen will impact the battle from the start, but the variety of them will impact the battle before you ever take your minis out of their boxes.

A full game is played with 3 champions on each side. While there are 4 categories of Champions (Shapers, Maelstroms, Slayers, and Guardians) players are free to mix-and-match Champions to construct the perfect team. There is a lot to dig into here.

Morrigan, included in one of the starter sets, is a Slayer with an inaccurate “one hit kill” attack that can decimate an opponent’s plans. Her followers can toss her some buffs, but pair her with Rattlebones who can sling buffs and debuffs around the board and she becomes truly scary. Suddenly you’re faced with an epically powerful Champion slayer taking up your attention while Rattlebones skips around the back line getting extra points.

Teasing out optimum team compositions is a huge part of the appeal of Godtear. It feels like building a deck of cards in card construction games but is far more streamlined than Underworlds (or something like Warcry). This gives the game a fantastic pick-up-and-play quality, as each Champion’s Followers and ability cards are fixed. New players can just grab a few warbands and get going. The depth is there but it isn’t daunting to start.

Unfortunately, it does make getting into Godtear costly. Starter sets include 2 Champions in addition to all the tokens and boards you need. A 1v1 game is a anemic and even 2v2 feels a bit light. A full game of 3v3 is going to require a high initial cash outlay, and choices will only increase the cost from there. The ultimate cost is not much higher than keeping up with a game like Underworlds but the initial cost is high for those who didn’t get in on the Kickstarter.

Godtear’s real beauty is not the miniatures, however. What makes it shine is what’s purring away under the hood. There is a fantastic push-and-pull tempo that emerges thanks to a couple of brilliant design decisions.

The first is phase structure. A game will lasts up to 5 rounds, each round divided into two phase. In the Plot Phase the first player will activate all of their Champions and Follower groups before their opponent gets to go, at which point they activate all of their models. Plot Phase actions tend to be focused on positioning and set up, with little to no opportunity to deal damage.

In the Clash Phase things pivot to alternating actions, with players activating a single Champion or Follower Group before their opponent can react. The cards packaged with each model make this easy to track; one side is dedicated to the Plot Phase and the other to the Clash.

This system provides rich tactical opportunities. It can be a huge advantage to get to activate your entire side in the Plot Phase first, but it does require you to reveal your entire round strategy to your opponent who gets to react unimpeded. Because combat is reserved for the Clash Phase, the alternating actions provide the feel of a deadly dance.

Followers will swarm, Champions will swing giant scythes, and points will fall on both sides of the board in the other fantastic design point.

Rather than simply accumulating victory points in mass, points scored move a VP tracker up and down a track like a tug of war. At the end of a round whoever has the tracker on their side of the scale wins only the points award for the current round. Round 1 is worth 1 point, Round 2 is worth 2, Round 3 is worth 3 points, but then the points scale back down. Rounds 4 and 5 are worth 2 and 1 points respectively.

This point curve prevents snowballing while also preserving tension. There is little need to crush your opponent in any given round; win by 1 or 20 and you still earn the same number of points. This means that late-phase actions are often more valuably used setting up for the next round, especially if it’s clear you’re behind. What does it matter if you give up a single point in Round 1 if you can prepare yourself for Round 2? Whoever loses the Round also determines who gets to act first in the subsequent so late-phase actions can be extremely important.

The game ends when either player amasses 5 points. If you’re keeping up with the math that means winning Round 3 puts you in the same position as winning both of the previous rounds and sets up an incredibly tense Round 4.

Again, it’s the tempo here that makes this a great game. Movement matters. Buffs matter. Zones of control are critical, and not just making an attack but picking the exact right moment to pounce can swing the game in dramatic fashion. This all adds up to a rich game to explore.

It’s fair to say COVID has had a huge impact on Godtear. You could not pick a worse time to launch a brand new skirmish game than right as game stores around the world close for months or years. These games beg for organized play and game nights, for opponent variety and because the cost and storage needs make this a tough game to collect as an individual. You can of course, but one of the benefits of being model-focused with only a single action card is that no single person should feel compelled to catch ’em all the way you sort of have to collect ever Underworlds expansion to remain competitive.

Luckily, however, Steamforged is getting ready to kick off organized play this year and has announced continued support via expansions. While it’s a shame that getting up to 3v3 can cost a good bit of cash to start, this is a game with legs. Different team comps can play dramatically different, so a pool of Champions will provide not just options but unique experiences. My fingers are crossed for a good year for Godtear and you just might see me stumbling into game night loaded down, ready to have a battle myself.