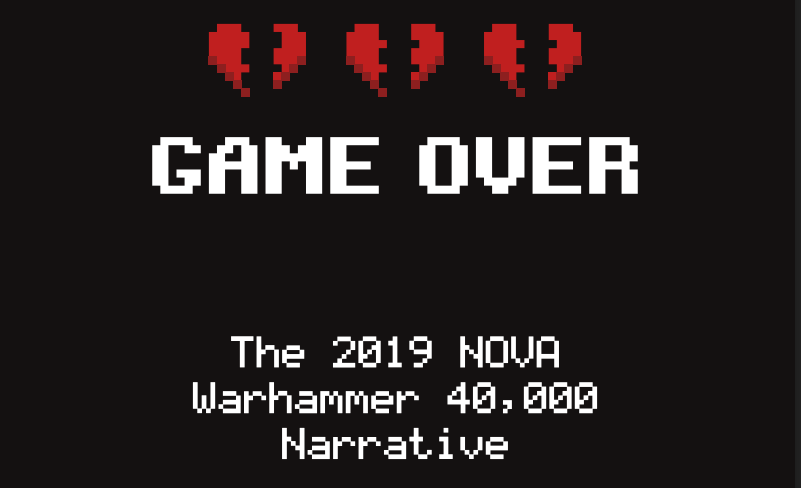 The NOVA Open comprises some four levels of the Hyatt at National Airport in Washington D.C. — everyone who had to walk up and down the broken escalator felt that one — and there were, roughly, one and a half levels dedicated to Games Workshop’s flagship products: the 30K room and Age of Sigmar section down the second, working, escalator, and above that the massive, communal, floor-consuming monstrosity that was the room for Warhammer 40K.

The vast majority of the room was taken up by the NOVA 40k Grand Tournament, the competitive tournament where just about everyone showed up to go 2-4 on Friday and Saturday, and then leave Sunday morning. There is, however, another event played during the annual NOVA Open weekend every year that demands attention: the Narrative.

If you’re not familiar with the Narrative, the conceit is quite simple and the implications are quite complex: forget all the Warhammer 40K lore. You are now in a different, ongoing story of good versus evil, or at least humanity versus xenos. Your armies are reflavored to match this new paradigm. The way this works from a rules perspective is that, for the most part, you — the player — are just here to carry out individual missions on a schedule. It’s the warlords of the Narrative, the commanders of each of the two sides, that decide the strategic goals and the plays they’ll make to achieve those goals. And on Sunday, the decisions both sides have made strategically — and the wins and losses they’ve had tactically — culminate in Apocalypse: a knock-down drag-out fight at the end of the world for total victory. At least this year.

Editor’s Note: If you’re interested in reading more about this year’s 40K Narrative event, you can find the rules primer for it here on the NOVA website.

You are playing a part in an evolving story that not only spans the three days that the game runs at the Open — because the game is constantly running on some six tables on Friday, Saturday, and Sunday, narrowing down by the end — but eight years. The storyline has been progressing for almost a decade, and there have been some bumps along the way.

“It’s changed in a lot of ways,” said veteran staffer Dan Boyd, in his sixth year at the NOVA Narrative, “and not all of them good. The first two years, the Narrative was a smaller group of people who signed up for the whole thing. Back then, with the group being more easily managed, there was a greater focus on story, games were more personal, and the group was tighter. A few years ago, the Narrative became an ‘a la carte’ option for casual 40k games. While there is nothing wrong with this approach, it changes the tone of the event. With more participants, lower levels of buy-in, and inconsistent personnel, the rich world-building and intense narrative play has become diluted.”

Indeed, the games are quite different — even just visually, from the games over in the GT just tables away. GT games have sparse terrain, focusing entirely on tactical and professional gameplay — so there’s no space for, say, a huge Eygptian-themed temple, or a snowy radio relay. Over in the GT, you get a few standardized, symmetrical terrain pieces on a neoprene mat and you’re good to go; the priority isn’t the aesthetics. Even as the event has grown over the years, a lot of the boards for the Narrative still look pretty damn cool. 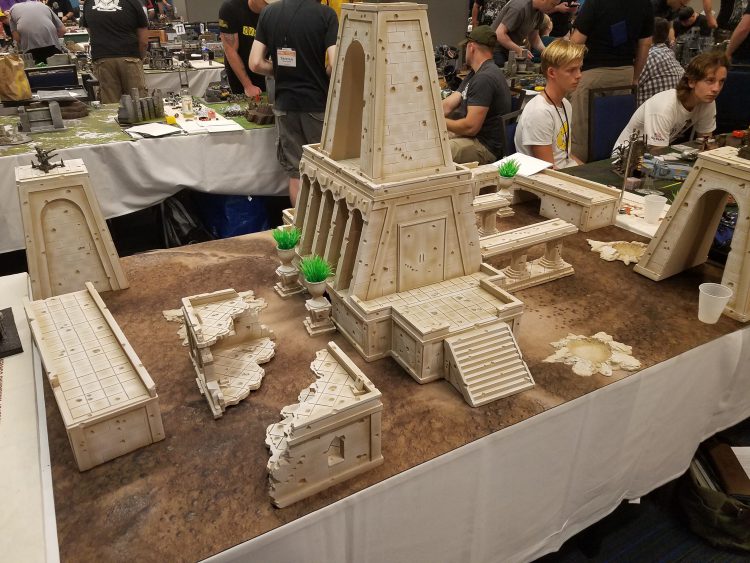 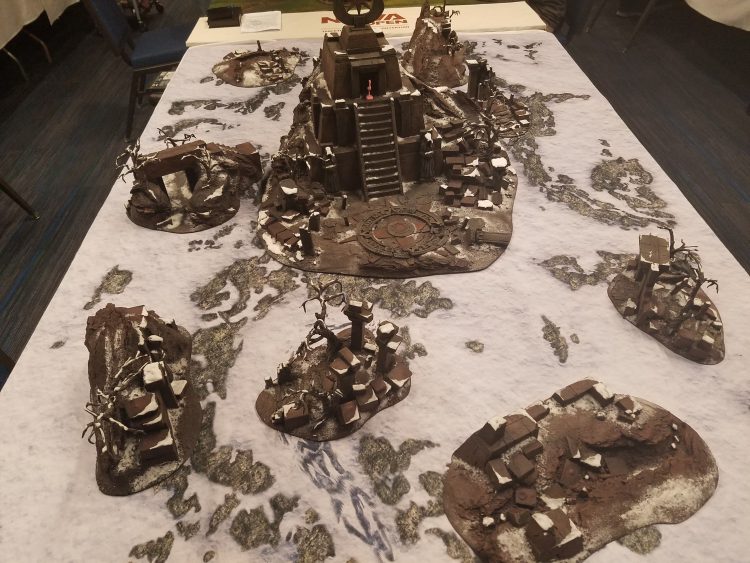 The games themselves feel different from playing in the GT, too. “The time limits on Narrative games are either non-existent or extremely generous,” Boyd said. “While I’m certainly capable of playing a fast game of 40K, I much prefer a relaxed pace. Chatting with my opponent, pausing to grab drinks, and keeping it fun and easygoing are all important elements of a fun game to me. And not having to worry about turning in scores on time and when the next game is about to start makes it very easy to include all of those elements.”

The structure of the event is far different, and arguably far more forgiving than running into a pro player who lives or dies on the outcome of the match. “We pair off ‘battlegroups,’ then have the leaders of the individual battlegroups — the warlords — perform the matchmaking duties at the beginning of the round. Ideally, the warlord will know their group and what their players have brought, and can match them to someone with the intent being a fun and close game,” said Boyd. “I hate it when players feel that a bad matchup removes their agency, so we strive to make sure it doesn’t happen. We don’t always succeed, but I think most games are good and fun for all players.”

This was a turning point for the Narrative, however — an event that’s inspired other similar, more story-focused get-togethers at other conventions around the annual 40K schedule. The story itself was ending: “Story-wise, the whole 8-year long journey was on the line, but everyone was super chill and we were all focused on having a good time,” Boyd said. 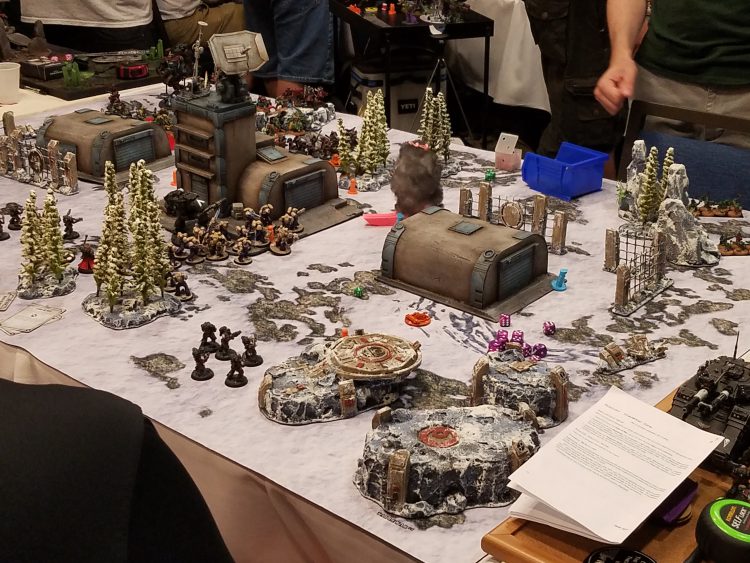 To compress literally eight years of sweat, fun, and more sweat (Hyatt conference spaces turn into a sauna with 800 people in them): a confederation of alien systems ruled by a body named the Virtue invaded our solar system under the belief that we were unfit to rule ourselves. Hard to see how they would get that idea. The commander of the Virtue’s fleet failed in his given task, but succeeded from another perspective: he died ramming his flagship into the planet Earth, cracking its core and dooming it to annihilation. Humanity abandoned Earth for obvious reasons, and took the fight to the Virtue under the banner of the Coalition of the Free, establishing beachheads that would threaten multiple Virtue core worlds. The tide turned against the Coalition, and they were pushed back…until this year, the final conflict, when the Virtue overextending themselves trying to strike a final and terminal blow to the Coalition, and were instead destroyed themselves. Boyd, casually: “As overall leader of the Coalition in the Narrative, I couldn’t be more proud of my players.” 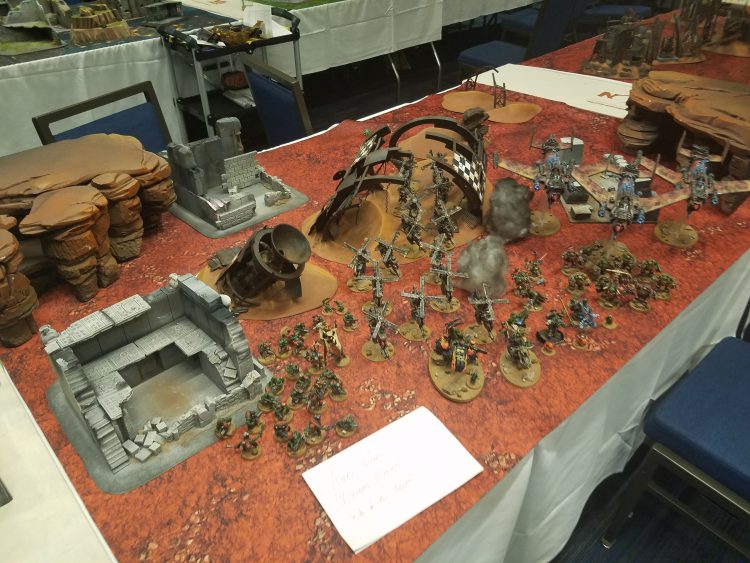 Even though the story will be starting over next time, however, the memories of the event will still have continuity; in the end, the story’s important, but that’s not what it’s really about. “The best part of the Narrative every year is the people. There are a lot of really good folks who come back to the event every year, and seeing them is the true highlight,” Boyd said. “Who could have predicted that the true narrative was the friends we made along the way?”