Hey Hams, I’m Dan, better known as FromTheShire online, and welcome back for the fifteenth(!) and penultimate installment of the 40k Hamateur Hour’s Road to Nova. This week I’m continuing along through the process of getting my first painted army together for Nova 2019, so let’s see what I managed to get done since last week.

Yes that’s right, we’re now under a week remaining until Nova! Let the crunch time painting cram session begin! I’m definitely terribly behind where I was hoping to be when I started down this bumpy, pothole infested roadway. As I’ve spoken to before, despite this being my first army, I can’t help but look at the fantastic stuff from my fellow RtN authors and the community at large and want to match their prowess. Shockingly, however, it turns out that a few hurried weeks of building and painting will not actually turn out results similar to those pulling from years of practice. Similarly, going in to this project, I wildly underestimated how long it would take me personally to get from bare plastic to the fully highlighted and weathered models on diorama quality bases I can picture in my head as the eventual endpoint I’m aiming for. It’s ok though, as much as I have been pushing for this deadline, nobody is going to slap my models off the table if they are just painted and washed (though TheSexCannon might if I don’t find my pin vise and drill my bolters soon.)

All that being said, while I certainly have a good bit to go, I thiiiiiink I will get to my adjusted goal for myself. Everything except the sponsons for the Falchion are together as I’m waiting on some replacement magnets before I assemble those, and the rest is in the booth. I started the week with some posing left to do, as well as needing to do some straightening on my comically over-sized point sink.

While last week I knew I just needed to straighten out the right hand side, it proved to be slightly more difficult than I first thought. While some of the smaller pieces were able to be heated enough to work with with simply hot tap water, that rail is a big honking chunk of resin that needs some decent heat to soften. In hindsight, it would have been much easier to do that before attaching it to the main body, but at the time I was anxious to make progress and figured I could easily dip that side, no problem. I promptly forgot that fact and glued the sponson shield for that side on to complicate things, though not as much as getting home and finding out that the engine actually made it too large to fit in the large pot I assumed I could use for the hot water required. This eventually necessitated holding the whole thing on its side in a saucepan full of boiling water, trying not to let the shield touch the bottom lest it get severely warped by the weight of the tank pushing down on it. At the end of the day, I think it worked out, but there was a series of bends that required more force than I would have liked; not knowing exactly how much the piece could take without breaking which was my biggest fear.

Continuing with boneheaded moves, it was time to prep the autocannons for the contemptor, which had been sitting for quite some time without the shoulders attached for ease of painting. See if you can spot what i did immediately after picking it back up.

Not content with that, I began assembly on the Lt, and promptly glued the backpack on before the cloak, because of course it will be easier to paint the cloak separately. About 5 minutes after the glue was really and truly set, I realized that that cloak is very clearly notched and shaped to go on first, so into the boiling water it went, and thankfully I was able to warp it enough to pop on and then back into shape.

A few more things needed straightening and cleaning up, and then it was final assembly time.

With all the Preemptive Avengers assembled, time to get to painting! Naturally, there was an issue. After at least trying to clean up where I did gap filling, I did a final rinse off of the Falchion to make sure there was no residual dust lurking about to ambush either my painting or my lungs. Annoyingly, some of the pockets of water absolutely refused to dry in a reasonable manner, so after a couple of instances of surprise water dousing things while I was trying to prime, I quit while I was ahead and gave it additional time to dry.

Since you’re not in control unless you’re out of control, a couple of scout squads infiltrated the booth as well. They’re not strictly necessary, but they do work slightly better than a single intercessor squad in my 1000 point list, and as long as I’m airbrushing they take very little extra time to at least get started.Time will tell if they end up making the final list. 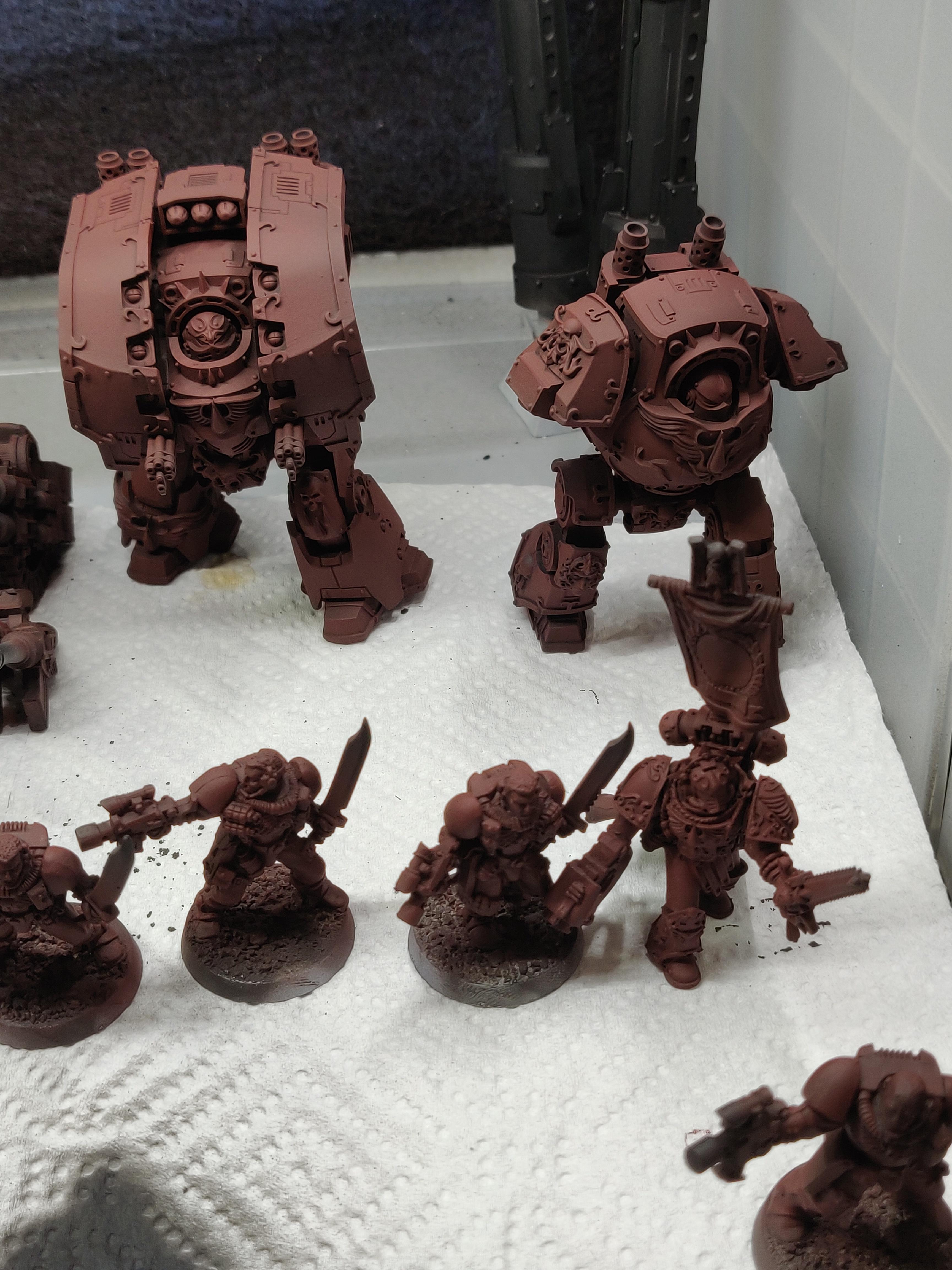 Rate your week on a scale from deeply concerned to panicked

Well, things aren’t ideal, but I’m currently sitting somewhere in the middle with slight fluctuations. This will of course rise steadily as the week goes on and I move from the quick airbrush work to the much more arduous blocking in of details. It’s been quite the journey, and I can’t wait to see everyone at Nova. Check back next week to see what state everything goes to the con in!