Hey all, welcome back for the second installment of the 40k Hamateur Hour, continuing the series following a rank amateur through the process of getting his first painted army together for Nova 2019. I’m Dan, better known as FromTheShire on dead comedy forums, and let’s see what I managed to get done since last week!

For my first post, I really didn’t have much done and was primarily focused on figuring out what I was going to be doing, gathering bits from the various corners of my apartment, and coming up with some semblance of a plan of attack. I had a few infantry squads most of the way assembled, but they needed final touches and mold line removal done, and I put together a rudimentary Kanban board.

The first task for this week was to do all the belt pouches, shoulder pads, heads, company markings, and the like. A solid portion of what I had together was DI marines, who already have a lot of that molded on, which in my case is actually mildly annoying since I want them to have a molded looking pad like the rest of their brothers. Additionally, they come in a wide range of both poses, and that just simply won’t do. “But Dan,” you say “it’s extremely unlikely most people will even notice from gameplay height, and even if they do, literally nobody will care. It might make a tiny bit of sense if it was just for you, but 99% of the time, won’t you be looking at their backs so you can’t even see that?”

Look, I don’t need that kind of negative attitude and completely reasonable argument out of you. Clearly the first thing that needs to be done is to assemble a bunch of additional Hellblasters and Intercessors to vary things up a bit, and then I will use the same Shapeways bits as on the rest of the DI guys to blend everything together. Fortunately when I last cleaned and consolidated, I thought ahead and made sure to put them someplace I wouldn’t lose them.

Well, I guess my compulsive need to try every possible bit is going to pay off. I know I have some similar but different ones with the company marking blood droplets I’m going to be putting on as well, they’ll do fine. Then it’s just a matter of making every guy just slightly unique. 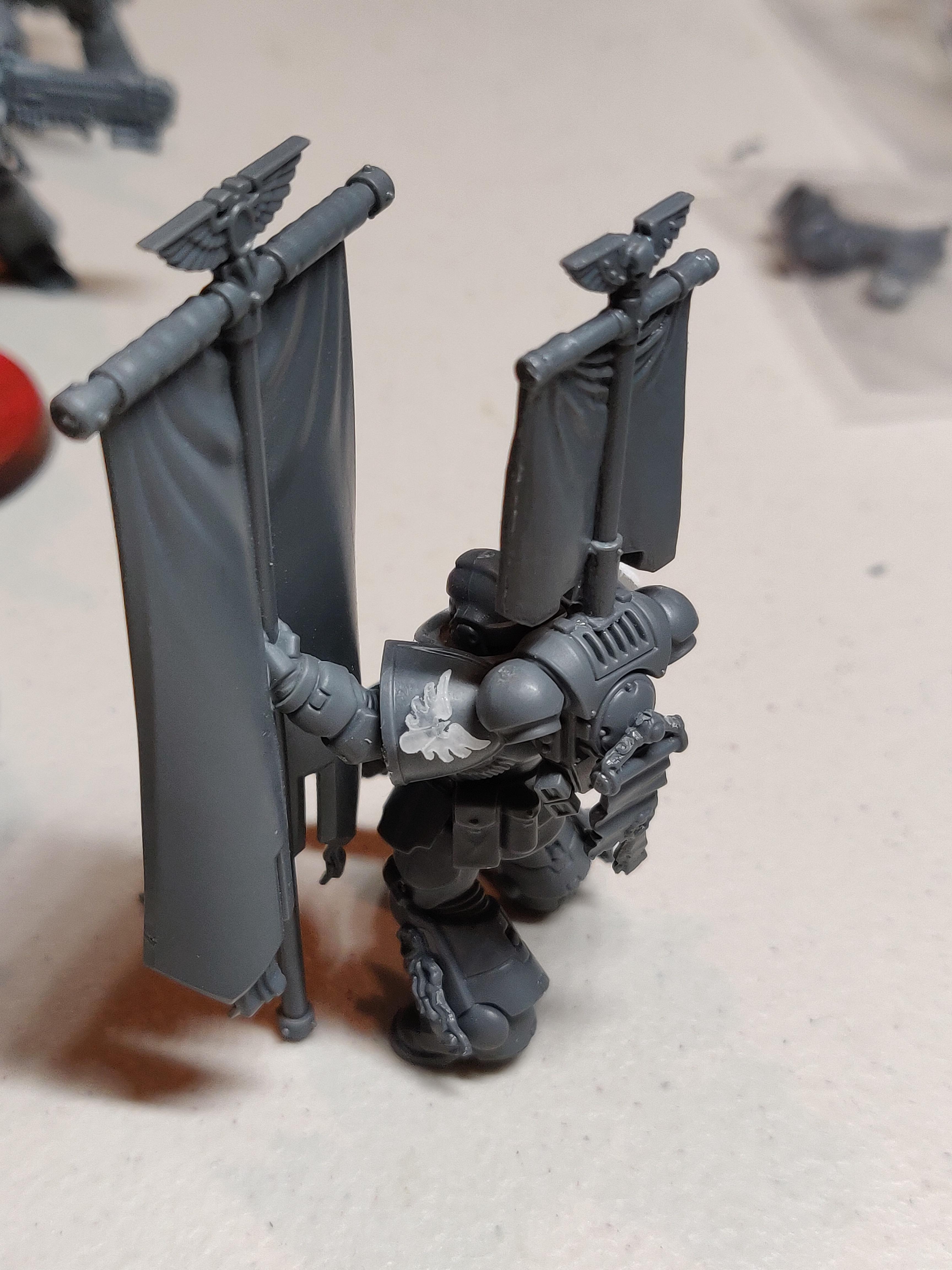 I want to show off the 3d printed bits a little. These are from one of several sellers on Shapeways who specialize in 40k conversion bits, and are attached with superglue, so you need to work quickly and cleanly. Hang on, let me see that shoulder there. You’re the high ranking fellow tasked with carrying the company standard, and you won’t be part of a larger unit where you might blend in.

Yes, I definitely fucked up the alignment on one of these badly, of course it’s on the Ancient. No, of course I didn’t notice until the next evening so there was no possible way that the glue wasn’t done curing. Add it to the list of small tweaks remaining before I prime this lot. Speaking of, here’s a couple shots of the results for the week. 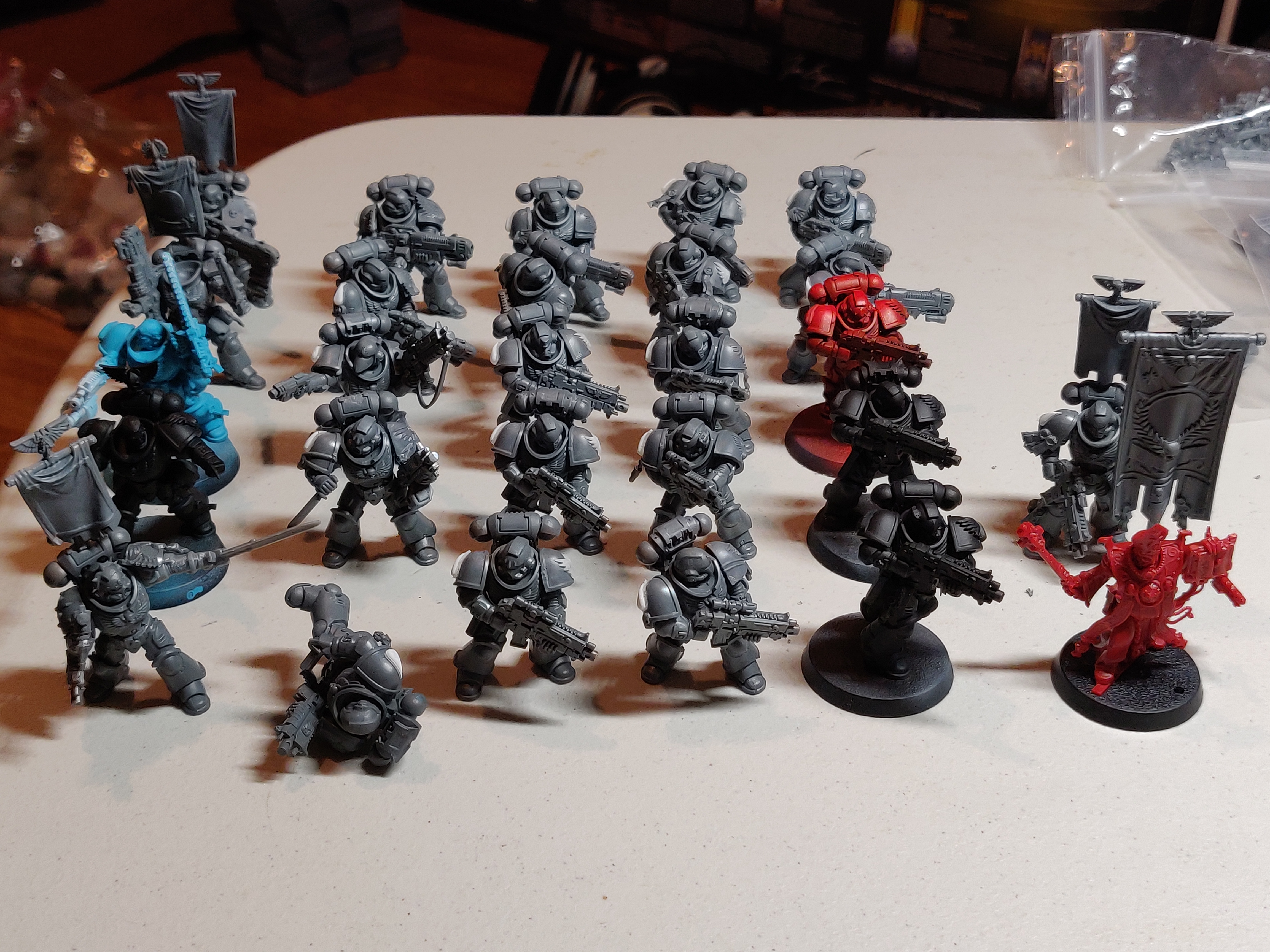 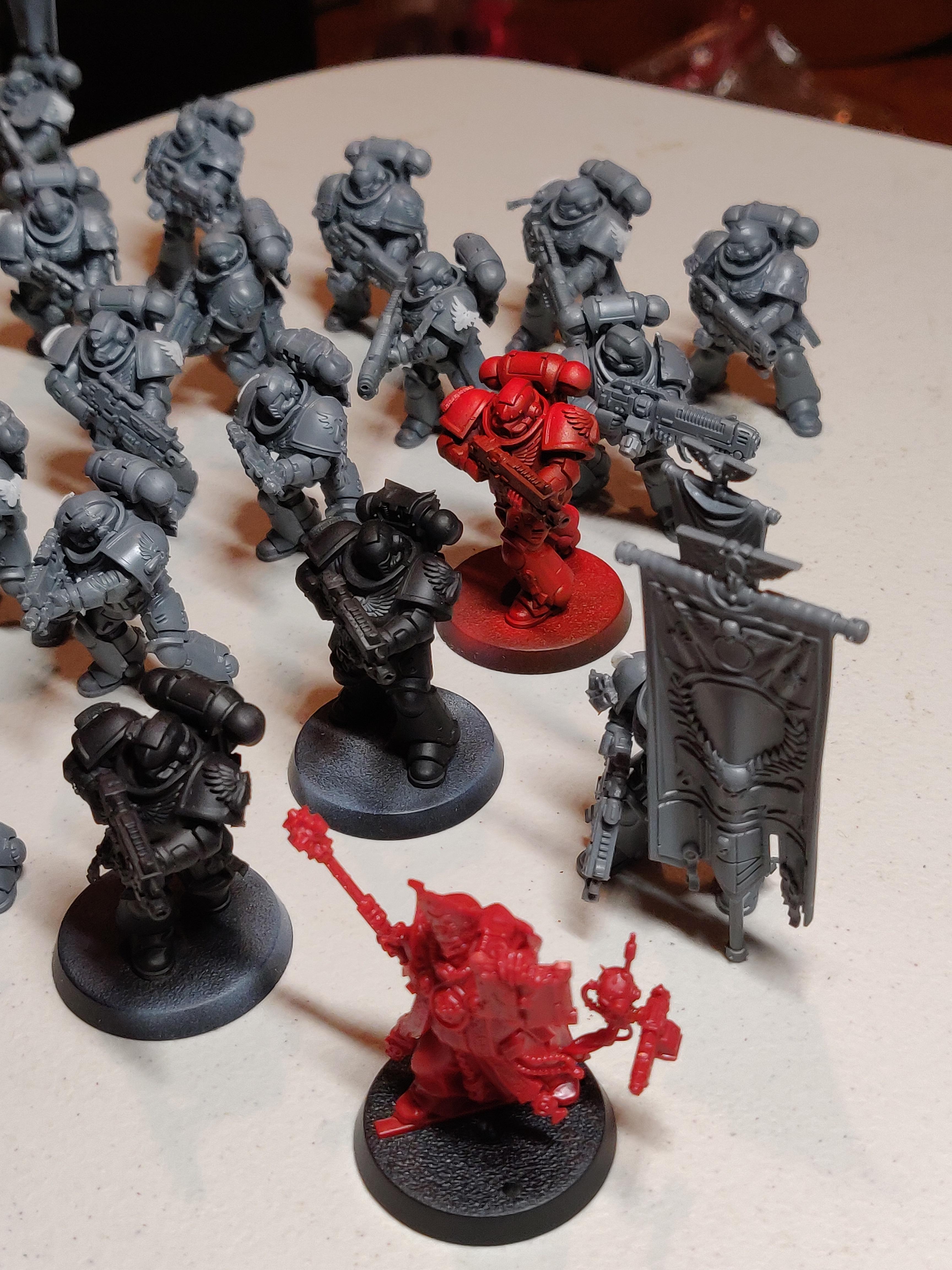 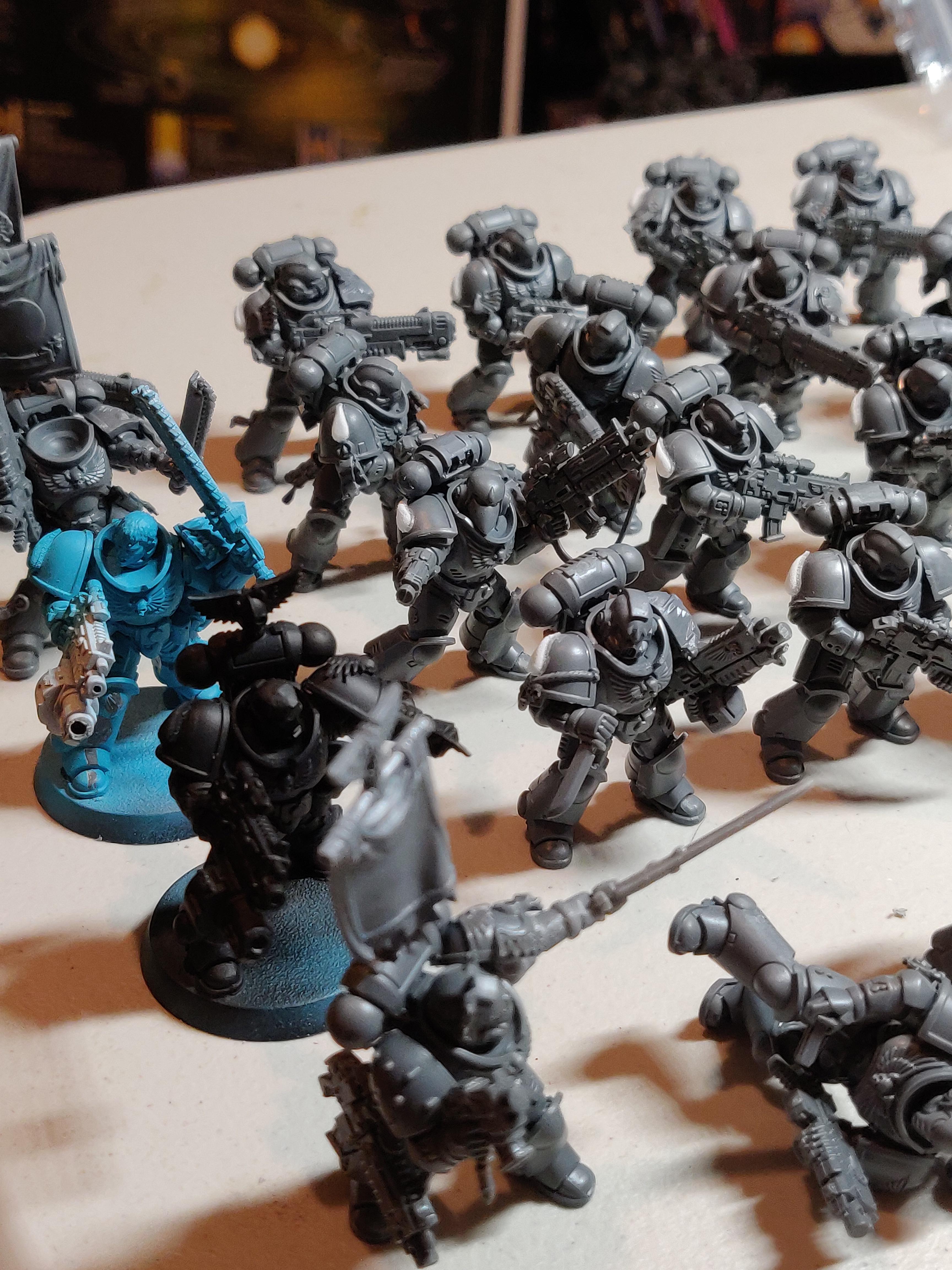 Overall, the week had a bit of backtracking, adding extra models, and mishaps, but I did put a bunch of time in and get almost all of the BA infantry assembled and did mold line removal, which takes approximately forever. I also received the base Catachan stuff from GW, the only thing that remains is to wait for my package from Anvil Industries with new arms and heads for them and then assembly can start on those as well. 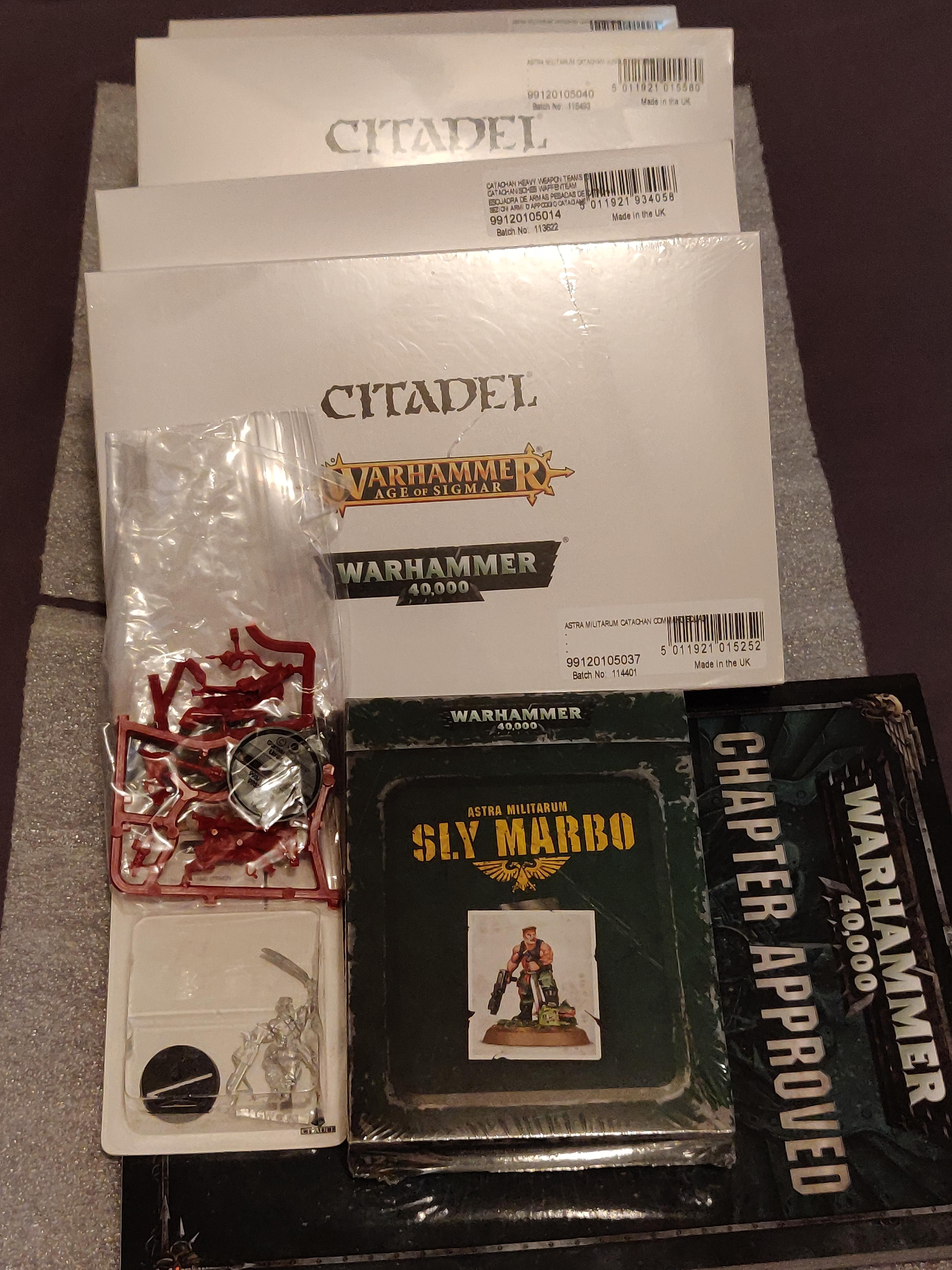 Finally, it was time to make a slightly nicer setup for my Kanban. I work with CAD so throwing a simple table together was easy. All I had to do was take a quick measurement of the normal, regulation size post its on my desk and draw a grid. The only way this could get fucked up is if at home I had, I don’t know, some kind of bastard sized square notes, just off the top of my head. Don’t worry about it though, I looked at them recently and they’re 100% the sane as these.

Moving along, here’s where I’m at at the end of the first week of actually working on the project. Not quite as far as I hoped due to basically entirely reworking the infantry squads, but now they are well and truly done and ready to go into the booth. The Catachan characters are quite simple to put together so they will be moved over shortly. I have everything gathered to kitbash my Dante, and the pieces on the way to do the smoll Lieutenant. The goal is to get that done in the small amount of free time I have this weekend, get everything that’s done so far primed, and in a perfect world maybe lay down the base coats.

Will I hit those goals, or will the fact I have several events going on over the weekend torpedo my progress? Can I juggle both hobbying AND grocery shopping for the first time in a couple weeks? Or will I end up burning down my apartment while high on glue fumes, collecting the life insurance on the tiny men inside, and living in a cardboard box with my newly commission painted army?! Check back next week to find out! 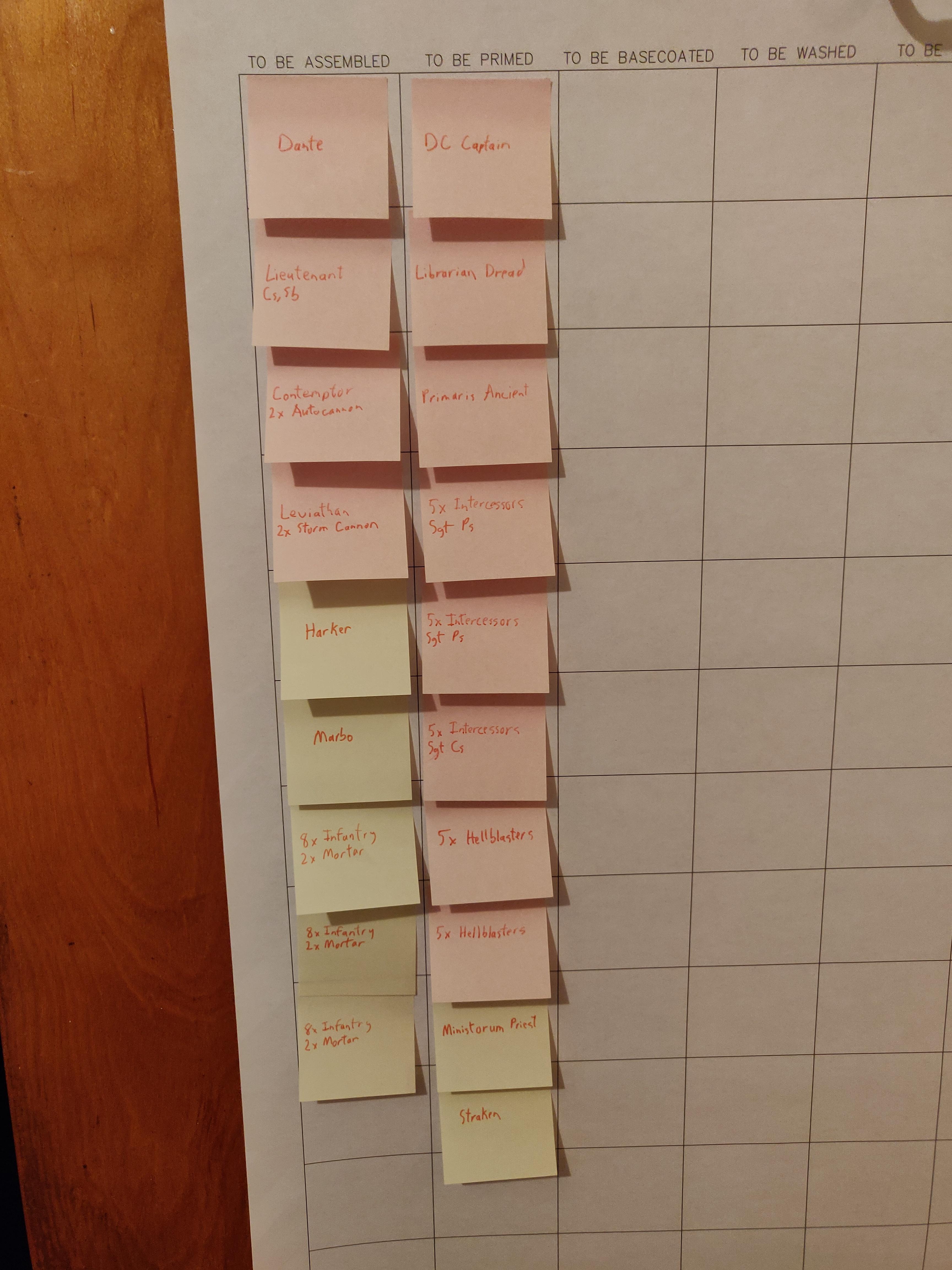