Hey Hams, welcome back for the seventh installment of the 40k Hamateur Hour, continuing along with a total amateur through the process of getting his first painted army together for Nova 2019. I’m Dan, better known as FromTheShire on dead comedy forums, and let’s see what I managed to get done since last week.

How’d your plan hold up?

If you’ve been following along, you already know the answer to this. I put a few hours towards finishing color blocking at the beginning of the week and thennn…….

I ended up getting in my order of ‘Jungle Fighter’ bits from Anvil Industry (actually my second in recent history) and Ancient Ruin resin bases from Dragonforge Design so naturally I wanted to start messing with them right away. There was definitely a strong ADD influence but there was a legitimate reason to check where I was at with the Catachans, namely that Anvil is UK based and there’s some degree of lead time in getting orders from them, and after placing the second I wanted to make sure I actually had everything I needed after placing the follow up order to get the female guardsman bits I wanted to round out the force. Despite the distance and the fact they list 2-4 weeks shipping to the US on their website, I actually received both orders under 2 weeks after placing them, within about 8-10 days after they were shipped. I also want to specifically shout out Jeff from Dragonforge who is the owner and sole employee. Since he’s doing everything himself and makes awesome stuff, he understandably has a backlog pretty much constantly, so I wasn’t sure if I would even be able to definitely get bases from him in time for me to paint them and got in touch with him. I was pleasantly surprised that not only was that not a problem, he actually offered to get them sent out that weekend so I would have plenty of time, and sure enough, they’re here.

OK, show us those Catachans then

With pleasure. As a quick, somewhat related aside, building continues to be a big time sink for me. A large part of that could theoretically be avoided if I just built the kit as it comes in the box and moved on, but that’s just not me. I’m certainly not on the same level as some people who do loads of green stuff-ing and other true conversion work, but I really enjoy kitbashing and at the end of the day, this is still supposed to be fun as I descend into panic once the deadline gets closer. Instead, I frequently end up spending time on making sure there aren’t say, repeating heads within a squad, or the same combination of legs and torsos, etc. Honestly I doubt people would notice most of it at a glance, but I do, so oh well. In the particular instance of Catachans, there’s also the fact that the stock kit is just horrendous. The heavy weapon squads are kind of ok-ish, and the command box is pretty decent, but the mainline troopers, ugh.

As you can see, a large part of the issue in my opinion is that the arms on the trooper kit are literally larger than Space Marine arms. Yes yes, baby Ogyrns and heroic scale and all that, but they just do not look right to me. The heads often follow suit as well, or are just badly sculpted, which is why I ended up getting a bunch of bits from Anvil, as well as some additional heads from Mad Robot Miniatures to spruce them up a bit to bring them more in line with super ripped muscle men, and not guys who could beat a Primaris marine in an arm wrestling contest. Without further ado, my progress for the week, the boys (and girls) from Planet Rambo 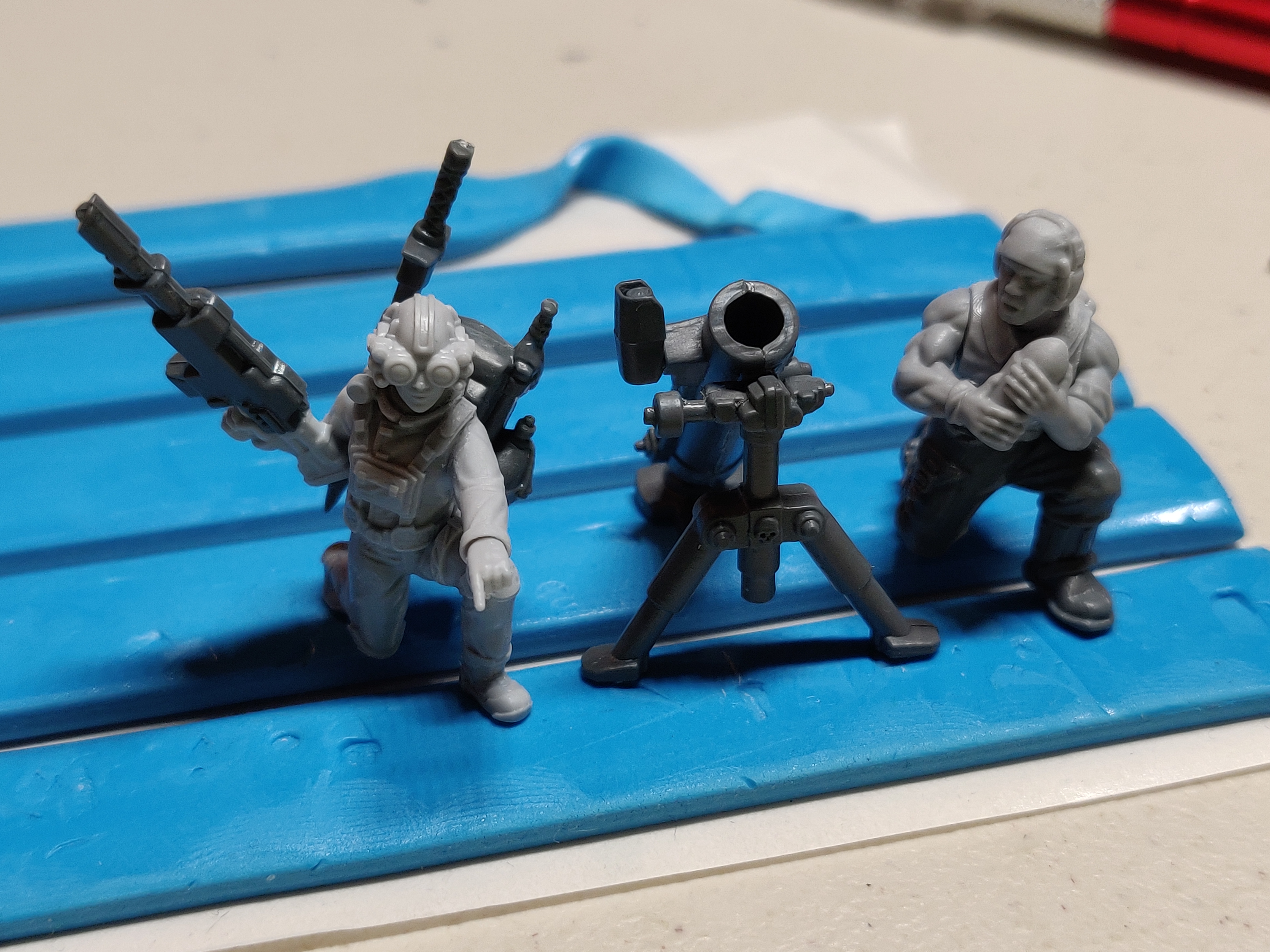 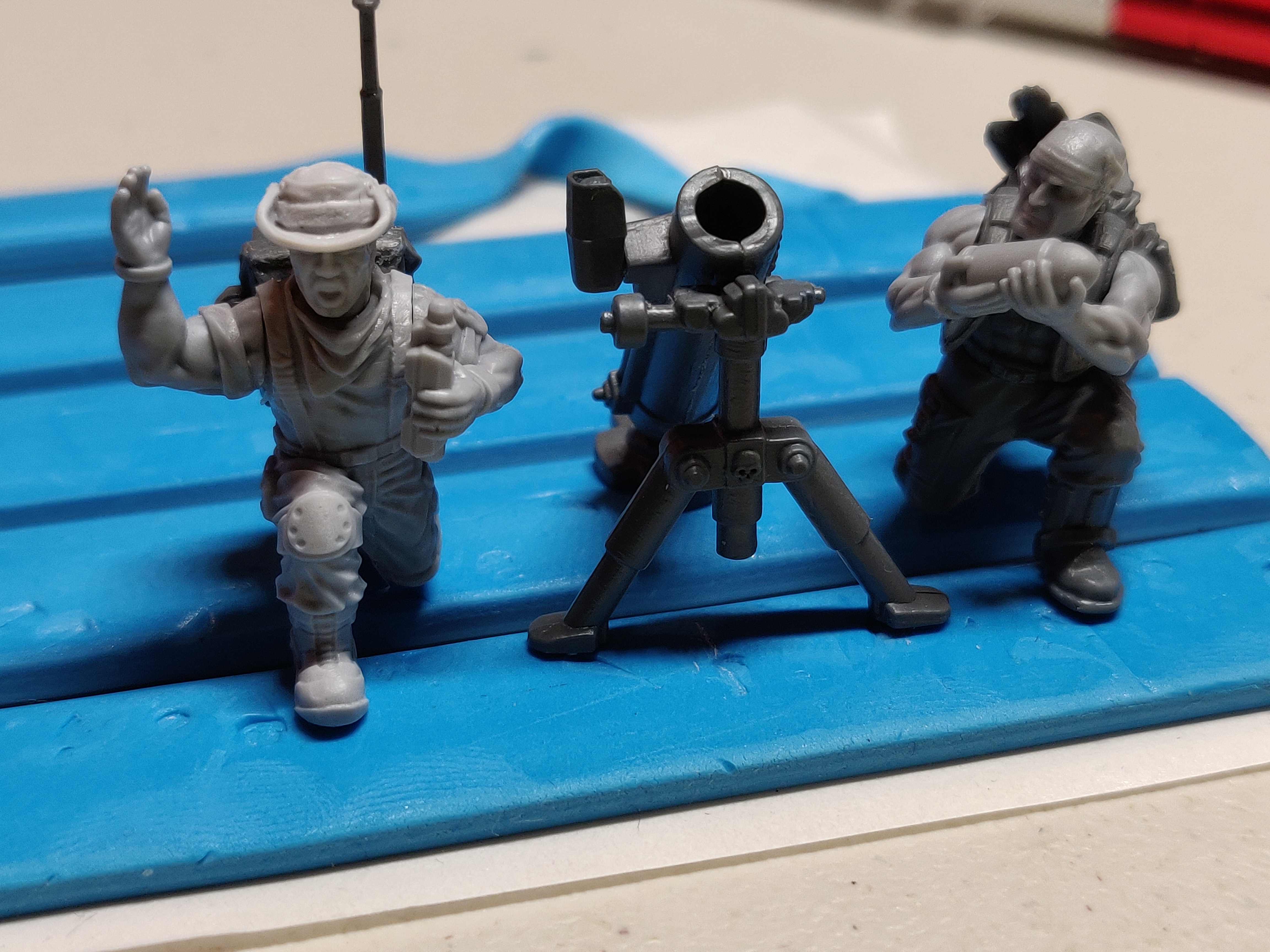 Goals for next week

Basically the same as last week, honestly. The only things needing to be assembled at this point are a BA lieutenant and the Leviathan which is good. I’m probably going to do final assembly on the LT and get him painted up to the same point as the Primaris guys and wash them all at once. Depending on the weather I may either try and do the Catachans with the new Contrast spray primer, or go for hand painting it on if it continues to be approximately 85% chance of rain every day. After a full weekend of building, I’m feeling pretty ok with my progress over the last few weeks, but I am definitely having the occasional oh shit moment when thinking about all there is left to do. There’s nothing for it but to keep plugging away though, so we’ll just have to see. Check back next Sunday to see if I’m feeling the same, more optimistic, or am too busy hyperventilating into a paper bag to post anything beyond that!