The Astradus Campaign: Starting the Campaign

Welcome back, everyone! In my previous article, I wrote about the rules and mechanics of the campaign and how we created custom warmasters for players to use. This time I’m going to talk about setting everything up for the campaign, how I did player matchups, and what’s worked and what hasn’t so far. As I write this, we’re just now finishing up the first round, so there’s a lot to discuss about how things have gone, but there’s also a lot more to do. I’m going to assume that most people reading this are looking for advice running their own campaigns, so that’s how I’ll set up the content here.

Starting the Campaign: The Resources

I had already spent a good amount of time on the rules and cards for the campaign, and gotten warmaster submissions from every player. So the next step to starting was to figure out what I’d need to have to keep everything running smoothly. Generally speaking, this is what you’ll need:

With the basic resources out of the way, all of my players signed up for Discord, and everyone excited about the rules of the campaign, it was time to create some Campaign Orders and send them out!

Creating Campaign Orders (for Round 1)

Generally speaking, each campaign round runs about 6 weeks, though they may be shorter or longer depending on how people get their games in. Our first round ran about five weeks. During each round, I usually want to give players 3 games of 40k and 1 game of Kill Team to play. I planned to assign priority values to each of these, though the general goal was to let players get in whatever games they could and let the number of games play a bigger role in the rewards. I also wanted to hold an event in Round 1 for a major asset that had a game effect and was worth more than a single campaign victory point. Given that I had about 13 players in each region, I broke this into two events per, where players would play multiplayer games to capture one of two towers: Either a Comms Tower or an Administratum Tower. 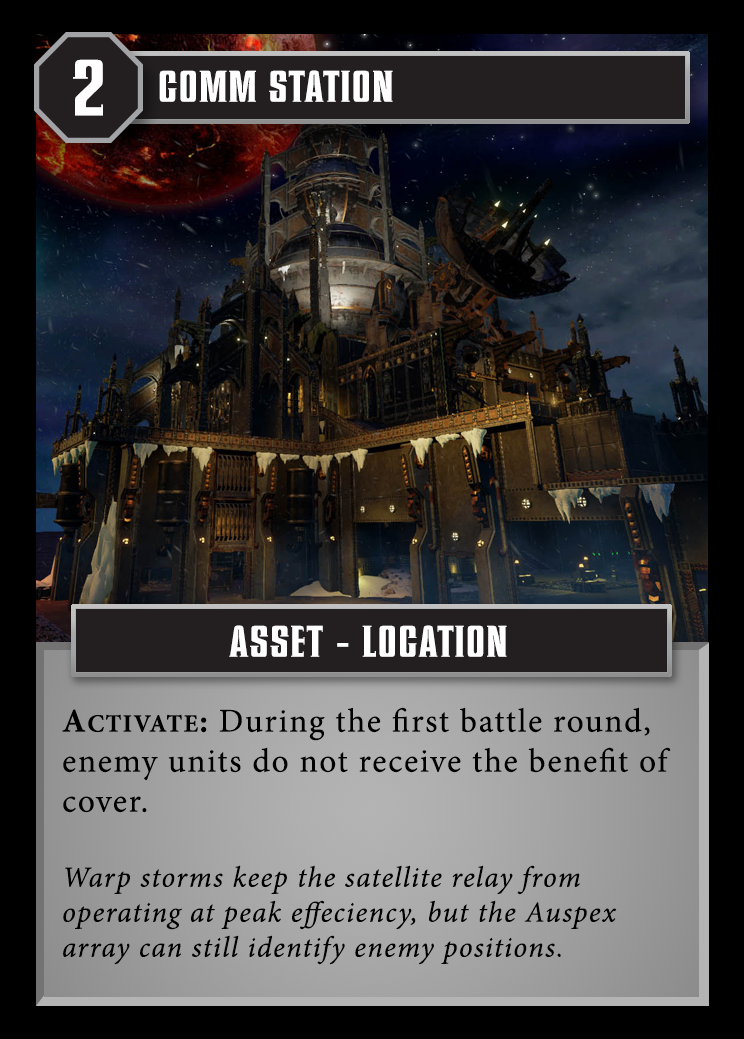 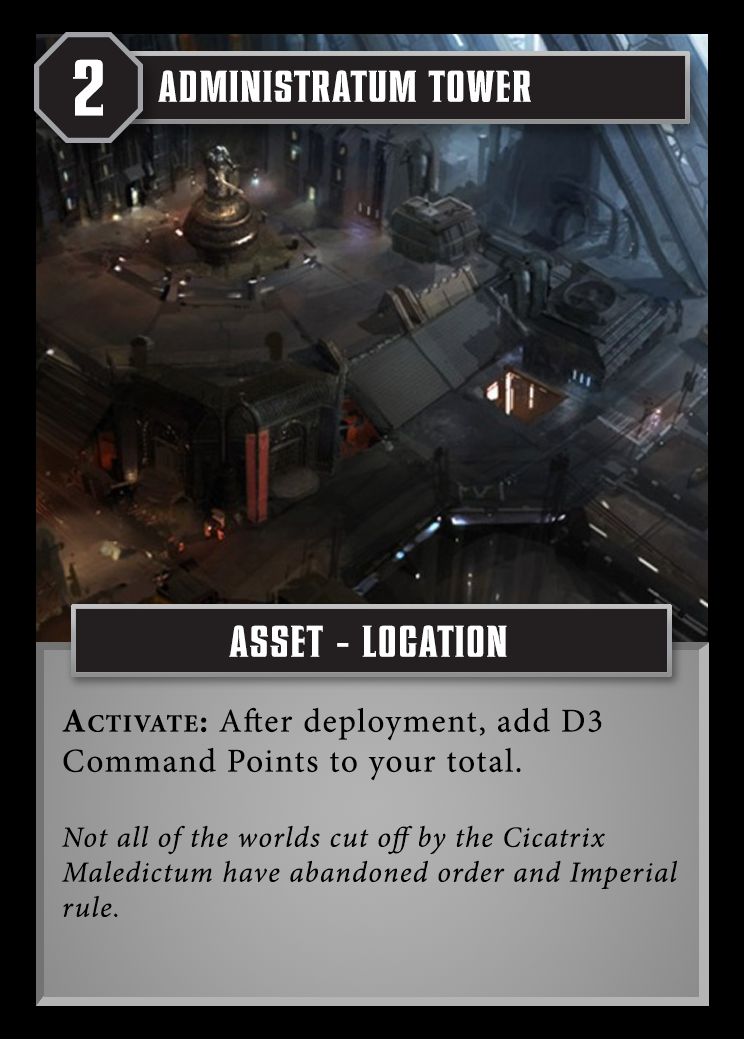 At this point I went ahead and decided to basically mirror the events and major beats of the campaign for the Mid-Atlantic and Greater NY groups, since for the most part (with some interesting exceptions), they’ll largely not be interacting for most of the campaign. And also because I printed off 3 sets of all the campaign cads, which ended up being a pro move. The events would give me a great way to create some extra excitement in round 1 while games were still small and also help get large groups of players together for the first time — many of the players in the Mid-Atlantic area didn’t really know each other.

After I knew what i wanted to do for the event, I went ahead and started matching players up. Usually the format I use for missions and matching is one matched game against a specific player or small set of players, and one or two “open” games that can be played against any player, or with some very loose faction restrictions, such as “any Imperial player.” In round 1, these match-ups are largely based on what I think some interesting story matchups might be, and based on who already knows each other, but in rounds 2 and on I’ll look to do more record-matching for the named games. The Kill Team games also tended to be looser in terms of matching players up. While there will be a time and a place for strict, story-based games later on, right now my big concern is just having players get to know each other and playing more games, and ideally not making it too difficult to work around the challenges of life and scheduling.

Ok, so let’s take a look at what a set of Campaign Orders for Round 1 looks like: 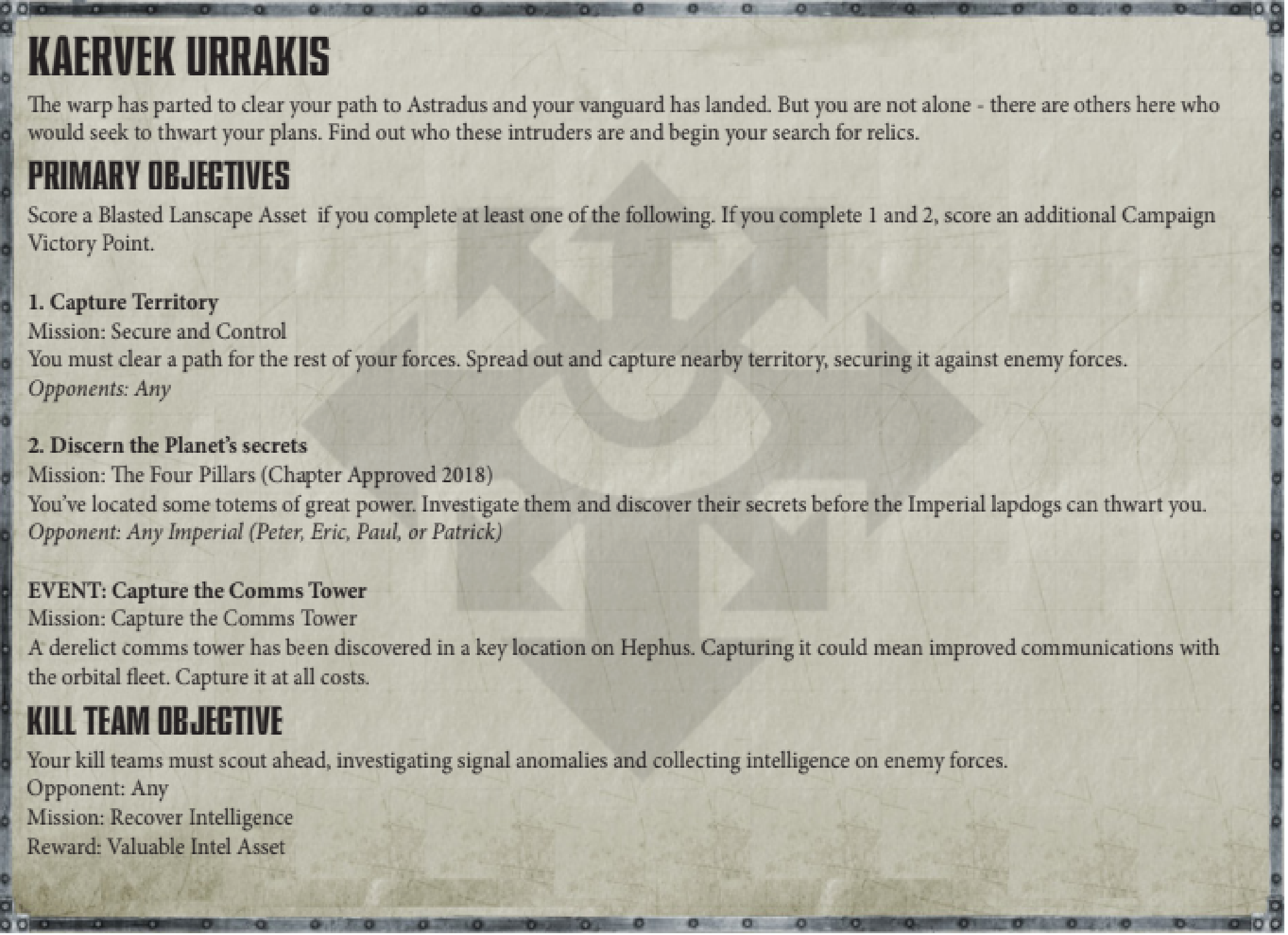 With all that set up, we could start the campaign in earnest. And so far, it’s going really well! I’ll be back in a week or two with a wrap-up of the first round of the campaign with lessons learned and to discuss how I handled stuff like handing out allies and relics. In the meantime, hit me up with any questions in the comments.