The Australian Kings of War Masters 2022 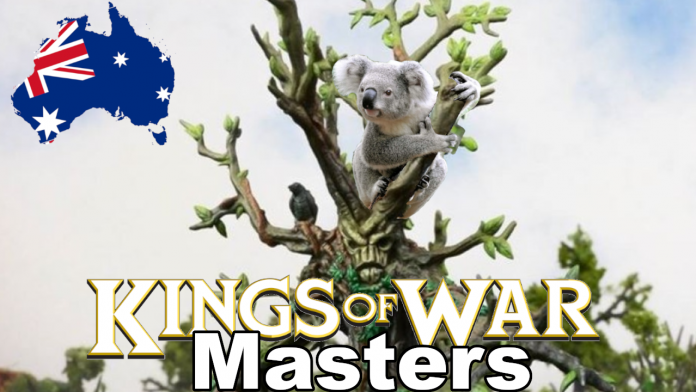 G’day Goonhammer readers! We’re back, and big things have been happening in the Australian Kings of War scene this past week. December 4th saw the ten best Australian  Kings of War players battle it out in the sweltering heat to decide the new Aussie Master. Here we’ll take a look at the winning lists, and some of what made them special.

The Australian Masters is a one day, four game event, with a twist. In the first round, players use their opponent’s army! Something to keep in mind when constructing a list; want to make a strong army, but one that isn’t easy to use right out of the box.

The day before Masters, there was a narrative event, Fortunes of War, run out of the same space, with (mostly) the same players. There was an extra opportunity for last minute practice or a chance to play a different list, and get warmed up for the weekend (in more ways than one).

I (Urr) went along to the narrative event (Fortunes of War), and had a blast. Team Evil faced off against Team Good across the Planes of Existence using the Halpi’s Rift supplement for the special effect of the plane and magic channelling tables, which ended up adding an interesting twist to the games. For those around next year, give it a go, I would definitely go again. A big shout out to Ken Ferris for running such a fun day.

A Quick Look at the Field

Apparently, the Australian meta in 40k is very different from the rest of the world, and we can see that Kings of War follows suit. There’s not a lot of the powerhouse armies we see storming down tournaments in the United States or United Kingdom here. Only one each of Nightstalkers, Ogres and Twilight Kin, and two of both Goblins and Forces of the Abyss, with no Greater Air Elementals in sight. We’ve also got one of Basilea, Northern Alliance and Order of the Green Lady, armies that rarely get a run at Masters over the pond(s).

It’s a sign of a well balanced game where there’s barely any double ups in the top ten. Even with doubling up factions, the two lists are each wildly different. For the Forces of the Abyss, Ken brought a mixed arms style list with a lot of shooting, and Luke Schafer went six hordes of Tortured Souls accompanied by some support. As for Goblins, Stephen Devenish went pretty hard into Mawpups, while Ben Rantall went for a mix of everything good in Goblins, with the formation, a Giant and a Slasher, among his support pieces.

Without further ado, the winners of the Australian Masters. In reverse order. For suspense.

In third place, we have Jeffrey Traish. Winner of three out of the last four Australian Masters, Jeffrey knows what he’s doing. This time he’s brought Basilea instead of the Varangur he’s been dominating with.

Aside from the faction, it’s also a very different style. There’s usually a lot of nimble scoring monsters in Traishy’s lists, but this time there’s only one. Instead, the focus is on large, high nerve and high unit strength blocks of infantry, with a nice mix of support. The Elohi Regiments give off Inspiring until it’s time to jump forward and get a juicy flank or rear. They’re also pretty good at grabbing objectives when there’s not a lot of shooting in the opponents list, as I found out when we played in the Narrative event.

The Dictators are another Inspiring piece, and pretty good chaff. They’re harder to shift than you think, and will almost always wound whatever they hit. And man, did the Phoenix get a glow up with the new Big Red Book or what? They Heal, they shoot, they chaff and they grab objectives at the end of the game because they are very hard to kill if you can’t focus on them. There’s a whole lot of other stuff in this list that you want to be focusing on more. Knights are Knights, they are just pretty solid, and the Ogre Palace Guard Captain is also just very good and cheap for what you get.

All in all, this is a list that plays the scenarios extremely well, with some very hard to chew through blocks of unit strength that are being constantly healed. It’s also got enough hitting power to make you respect the list. Though it’s not as outright lethal as some of other lists, it is one of the top scenario ones, with the highest unit strength of all the lists, though it is still out-dropped by the Goblins (as one would expect).

In second place, we have Matt Curtis and his Twilight Kin. Named as “The Last Dance”, presumably as a final send off of this version of the army. Interestingly, like with Jeffrey, this is a list quite unlike what Matt Curtis used previously. Matt qualified through a string of victories, winning CanCon with an elite Basilean army, and he also won BrisCon with Empire of Dust.

Like all Twilight Kin lists, we see Mikayel, the pre-eminent combat hero type, backed up by a Summoner Crone with Host Shadowbeast. We got to see that combo one-shot Hrimm, the Legendary Ice Giant, even after it’s nerf (more on where you can check out the streamed games below).

La’theal is around as a great magical support piece, stripping Stealthy and Spellward from a target and letting spells that target that unit reroll ones, which is a nice boost with all that Fireball and Drain Life. She pairs very well with the Cronebound Archfiend, who is up there as the best dragon in the game. Stealthy on a Defense 5+ dragon is pretty big deal, and it gets Brutal, and Vicious.

Two regiments of Twilight Gladestalkers and a Therennian Sea Guard horde, put out a lot of shooting. Wouldn’t want to be a Defence 4+ army up against this. The Gladestalkers can also put in the work in close combat, with their Dreamslayer Venom. This is matched by the Blade Dancer Neophyte Horde with Hammer of Measured Force, so an opponent doesn’t even get the value of their high defence units. Everything wounded on 4+ in melee by these units.

There’s also one last unit of Impalers, and it seems they’re here just to wack some things, and Cronebound Butchers are a nice thick chaff style unit to take some charges and hold up the opponents line.

This list brought the most shooting of any of the other Masters list, putting out 50 bow shots, 20 Fireball, and a smattering of Drain Life each turn, if everything is in range of course. It also brought a lot of melee threats that all have the equivalent of Crushing Strength two or better. The downside to this list was the low drop count of the army, facilitating easy counter deployment. It did well in any case!

In first place, Ken Ferris brought one of his favourites, his Forces of the Abyss. This army is about as mixed arms as they come with equal parts shooting and smashing. One of the advantages of the Abyssals is just how much shooting they can bring without actually needing to focus on shooting units. Flamebearer and the Efreet with the Diadem of Dragonkind are the only outright shooting units in the list. The Abyssal Fiend, Abyssal Warlocks and Zaz’u’szu also put out a lot of firepower, but are support pieces in their own right. This brings the fusillade to a total of 30 Firebolts (Piercing 1), 31 Fireballs (Shattering) and up to 8 Lightning Bolts (Piercing 1). Ouch!

The Moloch hordes and Tortured Souls regiments are perfect pairings, the latter screening the former if needs be. These units can get a lot of work done. Few things can withstand a charge from Molochs (Crushing Strength 2 with Vicious!), but the Tortured Souls, if left unchecked, can also be a major pain (Crushing Strength 1, Thunderous Charge 1, -/14 nerve).

The final part of the list, and perhaps the most interesting inclusion is the horde of Lower Abyssals. Typically these are not considered much as the Abyssal Ghouls are cheaper and have one higher nerve to boot. The difference is that the Lower Abyssals have the potential to be more durable, and bring Unit Strength 4 to the table. With all the other threats in this list, this unit is most likely to be ignored, but will ultimately be the winner for scenarios.

The list also has a considerable capacity to grind it out with Drain Life and plentiful Regeneration. Unfortunately the Abyssals Drain Life is nothing special, so can be hard to pull off, but its ability to tilt combat in favour of the demonic brethren can always be worth it at just the right moment. It would have been good to see one of Ken’s games streamed to see how it all worked, but instead it is up to our imagination.

If our coverage has got you interested, there were four games streamed from the event.

Check out Direct Misfire, https://www.youtube.com/@DirectMisfire to watch the games.

Bear in mind, there are a few technical issues. It’s Direct Misfire’s first time streaming, but they’re all still a good watch, and hopefully the boys will be back next year to do it again! And maybe one of us will manage to make it, too!