About two months ago we announced the Christmas Kill Team Challenge, asking readers to commit to building a kill team of their own. And with February over, as promised, we’re doing a final pass at these. We initially planned to show of more of our own progress, though I’m sorry to say that Games Workshop’s insane release schedule has sapped my time and directed it toward other hobby projects that I can’t talk about at the moment. My own Warpcoven team is still very much in the works:

It’s my fault for picking Thousand Sons, really. I thought it’d be easier because I’m also doing them in 40k but as usual, I underestimated just how much of a pain it’d be to paint that stupid gold trim.

With the Kill Team Team Kill event coming up at Warhammer World in March, it was vitally important that I finish a competitive Kill Team to take with me to the event, like Kommandos, Pathfinders, Harlequins, Veteran Guard etc. So of course I did my Assault Intercessors and Tactical Squad Kill Teams.

I started this project as during last summer, shortly before the announcement of KT21. It was focused on a rapid assault kill team made up of assault intercessors with two intercessor sergeants with power weapons to run round an Arena board chopping things up. I wanted to test how the new and improved space marines did in Arena.

I shelved the project when KT21 was announced, and because I was unhappy with the yellow on the helmets.

I fixed the yellow with some Daler-Rowney inks to increase the saturation and get rid of the chalkiness, and then finished the models. I went with silver trim because I like the colour, and the transfers went on nicely as well. I’ll matt varnish the models when the weather improves and get rid of the shine. 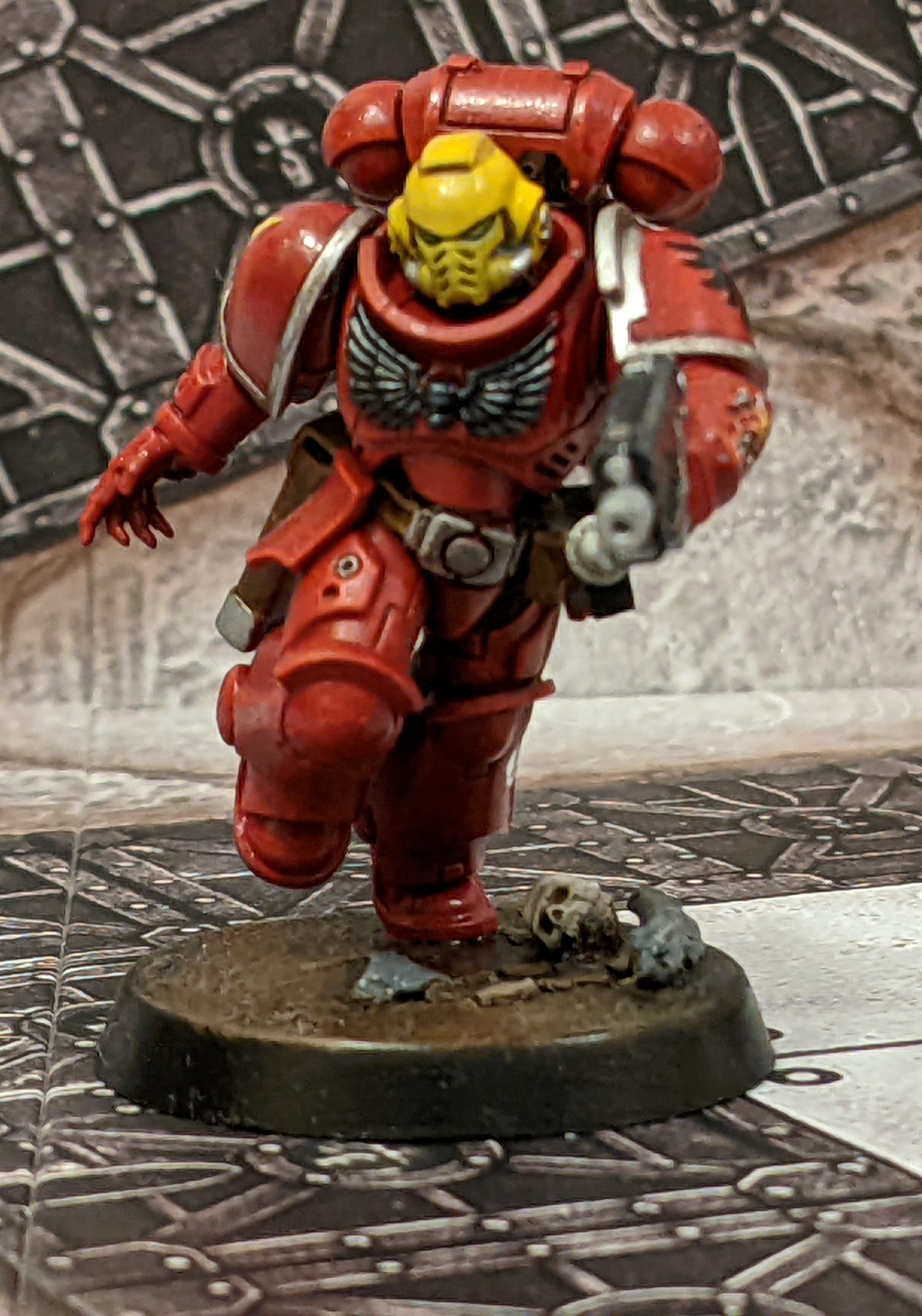 The bases are a mixture of Martian Ironearth and one of the non-cracking texture paints, drybrushed with some browns to be a nice dry earth, with some skulls as it wouldn’t be 40k without them. Once they been matt varnished there’s some grass tufts in their future.

Fancy spending like £70 on a Kill Team but all the individual models look really cool? Try Space Marine Heroes Series 1.

I actually really enjoyed these, and it made me enthusiastic about painting standard marines again. They’re just a bit bigger than the old tactical marines to look a lot better. There are some minor conversions (sergeants chainsword becomes a power sword, a couple of headswaps to have a marine in Mk3 plate and helmet and a marine in Mk6 armour) and I think they add to the character of the squad.

It made me eager to get my hands on the Mk6 coming out this year and eager to get hold of some bases that look like the space marine heroes ones. Models on a 3D base with differently posed legs makes such a huge difference compared to the power squats of the old marine models.

So two squads I wouldn’t take for competitive play done, just need to paint a competitive faction in time for the Warhammer World event.

TheChirurgeon: I may have to hang my head in shame but what wasn’t disappointing was all of you – our readers! We received dozens of Kill Teams over the last two months, with great photos and some cool notes and backstories. We can’t show all of them here, but here are some of our favorites.

These are some of our favorites posted to Twitter using the #christmaskillteam hashtag.

Many of you chose to email your kill teams to us. Here are some of our favorites:

You can find Samuel on Istagram here.

This one is my personal favorite of our submissions, in part because of the included lore:

Veterans of the Imperial Fists, Squad Alvoniaz consists of a mix of both Primaris Space Marines and Firstborn who have now crossed the Rubicon Primaris. Despite their different origins, the members of Squad Alvoniaz operate in near-perfect concert and excel in asset retrieval operations. Each member of the squad wears a relic helmet taken from the Imperial Fists’ armory as a way of honoring their collective past. During battle, these Intercessors forgo stealth and rely on overwhelming their enemies with well-orchestrated firepower.

From Will: “This is a mixture of old and newer models. The older ones were my first painting project and being a stubborn perfectionist, means it took me almost a year to complete them. The newer additions took me just a week.

Not ready to try painting motley just yet, but I really liked the Caliban Green and Kantor Blue base scheme I came up with and the Retributor Gold masks and trim just felt right for the deadly and dapper Aeldari Assassins.

The lightbox washed out the bases a bit, but I used Agrellan Earth, Nighthaunt Gloom and Nihilahk Oxide to create a cracking and energy leak effect around the stone platforms.

This really got me more confident to take on other projects and hopefully reduce those piles of shame, so thanks for doing this!”

Benjamin finished these in the nick of time.

These have been constructed using a variety of 3d printed parts and are inspired by snowtroopers and arc troopers from Star Wars.

Jan from Cologne, Germany submitted this team, led by the converted Runeprist.

Sp00ky turned in these lovely daemons, which are one of my favorite kill teams submitted. I love that banner.

Darryls’ Team has some great looking Thousand Sons, And I like that they normalized the base sizes for the sorcerers.

This is a wonderful and novel take on Death Guard, covered in blooms. They’ve done a fantastic job with these.

The runner-up, these White Scars look fantastic and I love the setting for the photo. This one also comes with some cool lore and notes:

For the kill team, I challenged myself to learn how to paint white well, while making do with the bits I had available. I have owned some of the bits and the transfers since the late 90s, so they’ve been in storage until I started the hobby again in 2020. Other bits have been donated or traded. The heavy bolter guy is actually metal, from an ancient Devastator kit. The only part of the models I bought new for this project are the bases. I was actually amazed that the transfers were still good. Although my “main” chapter is Primaris and I love newer models, the team made me appreciate the flexibility and classic look of firstborn kits again.

My goal was to portray the sheer aggression and speed of the White Scars. Most of the team are moving fast, shooting from the hip, and looking to wreck stuff. I tend to prefer depictions of Space Marines on the “overpowered” end of the spectrum, where a handful are usually enough to win any engagement. A small team of absolute badasses was perfect for this. While I stuck to convention for the squad/company markings, White Scars’ fondness for personalised helmet markings allowed me to distinguish them a little. It was a great bite-sized little project and I will probably do more in this vein.

The Real Prize Was the Operatives We Killed Along the Way

We’d like to thank everyone again for participating in our Christmas Kill Team challenge – it was great to see all your submissions and learn more about your kill teams. We’ll have more competitive kill team coverage next week but now it’s time to take those teams, hit the table, and win some games!