The Early Risers of Zendikar Rising

by Shane Beeps of The Dive Down

This week’s episode of The Dive Down is a celebration of the new. Zendikar Rising is here, and already making waves in Modern and Pioneer. In this companion article, I’ll first go over what happened in last weekend’s Modern and Pioneer Magic Online Challenges, and then dive into some of the latest decks and cards that are making waves.

The Break Down: Challenging Challenges

In the Modern Challenges of 9/19 and 9/20, we immediately saw some new format hijinks. Mill—yes—MILL took first place in Saturday’s event, piloted by TheEnzym. While everyone was expecting playsets of Ruin Crab and Hedron Crab to show up, the surprising thing to me was a grip of Bloodchief’s Thirst. I mentioned the strengths and flexibility of the card in my last article, but this deck was what made me realize what a miss we had made by overlooking it. Note that this list isn’t running Maddening Cacophony, another new Mill spell that many other pilots chose to test out this weekend. We will see how this now-popular deck evolves in the near future.

Another deck featuring a number of new cards was Saturday’s 4th place deck, piloted by Metcalf23. It has Archon of Emeria as a two-of,the flying Rule of Law that also makes non-basics enter tapped. Skyclave Apparition appeared as a four-of, another one of my picks! Apparition was one of the more popular cards from the new set, apparently working well at exiling opposing permanents! A mild surprise was Maul of the Skyclaves showing up as a one-of. This is a card Aspiring Spike mentioned being interested in on our second spoiler episode. Is the rate just too tempting on this for players to ignore, especially with no immediate equip cost? +2/+2, flying, and first strike certainly doesn’t stink. 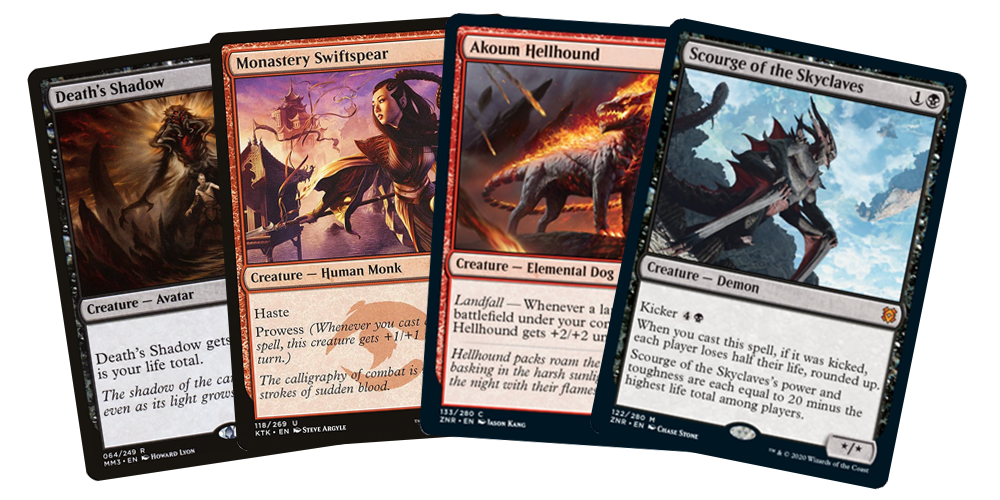 In Sunday’s Challenge, the 5th place list was more-or-less what my co-host Dave predicted would surface: Aggro Jund Shadow piloted by Maximusdee. Death’s Shadow, and Monastery Swiftspear are combined with the new Akoum Hellhound and Scourge of the Skyclaves to form our hyper aggressive creature package. A lot of other expected aggro Shadow cards like Thoughtseize, Street Wraith, Bolt, Become Immense, Temur Battle Rage, Mutagenic Growth, Mishra’s Bauble are all here. And, of course this deck can also run Lurrus – so it does.

Up next in 6th, McWinSauce brought… Temur Uro Hour Field Pile? They immediately slotted in Omnath, Locus of Creation and Sea Gate Restoration, and had some Cleansing Wildfire in the sideboard. Listen to this week’s episode for more of our thoughts on Omnath!

While I just made note of all the new stuff we saw this weekend, it’s interesting that Humans made up 14% of the Challenge top-32 metagame, while the format powerhouse Uro pile decks were barely more popular at 15.6%. Humans are doing work again!

Heading over to Pioneer, we immediately saw the Pathway lands showing up in both two and three color decks, specifically those that needed better allied-color mana! Selesnya Auras, Gruul Aggro, and Naya Winota were some of the well-performing decks I noticed improving their mana with these new dual lands.

Speaking of Gruul, it took first place in Sunday’s challenge! Cragcrown Pathway solidifies the allied manabase and removes the need to run the gross Game Trail. This deck even shaved down to a single Rootbound Crag, instead choosing to run a lot more basic forests and mountains. This aggressive deck gets in there with low CMC creatures, Atarka’s Command, and even Reckless Bushwacker.

Pioneer master Claudioh took 3rd with their usual choice of 5-Color Niv-Mizzet, but added two Omnath, Locus of Creation because… why not?

Tyobe0440 took 5th with Bant Spirits, with four Skyclave Apparition solidifying the interaction without reducing the Spirit count, and added in a singleton Glasspool Mimic for a spicy clone creature that can also enter as a tapped blue source. 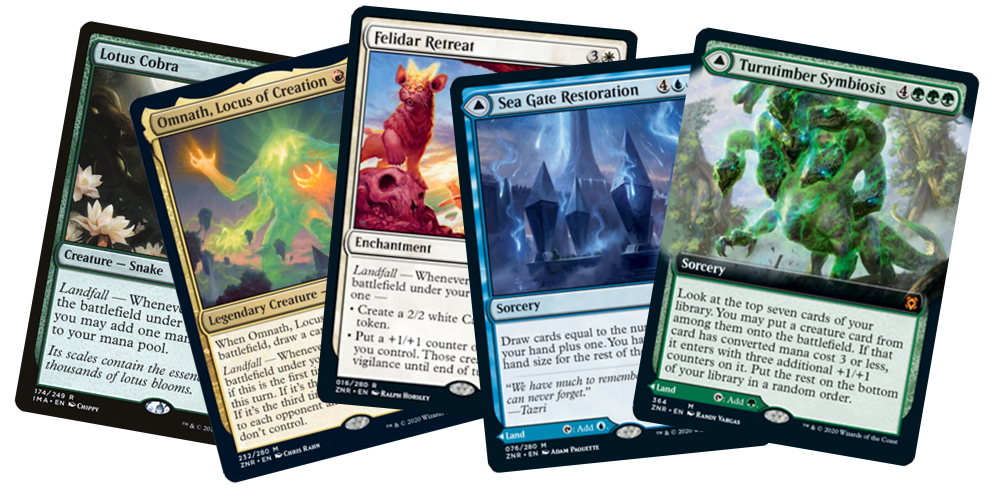 Heading back to Saturday’s Challenge, the most interesting deck was perhaps 5th place KillerSUV’s wild one: 4-Color Uro Landfall Ultimatum. In what could likely be a Standard deck, this is featuring five new Pioneer cards in Lotus Cobra, Omnath, Locus of Creation, Felidar Retreat, Sea Gate Restoration, and Turntimber Symbiosis. This deck looks like it wants to quickly ramp to start playing potent threats like Agent of Treachery, Uro, Omnath, and, of course, Genesis Ultimatum, which lets you put any number of permanents from the top 5 cards of your library into play for the low low cost of GGUUURR.

The Dive Down: Recrossing, Reforging, Rebelching

While this new strategy didn’t take over the Modern Challenges (yet), we wanted to do a mini deck dive looking at a concerning new trend:

Do you notice anything… strange? That’s right, there are no actual lands in this deck, only flippy lands that are creatures and spells on their primary faces. Perhaps we should have seen this coming. 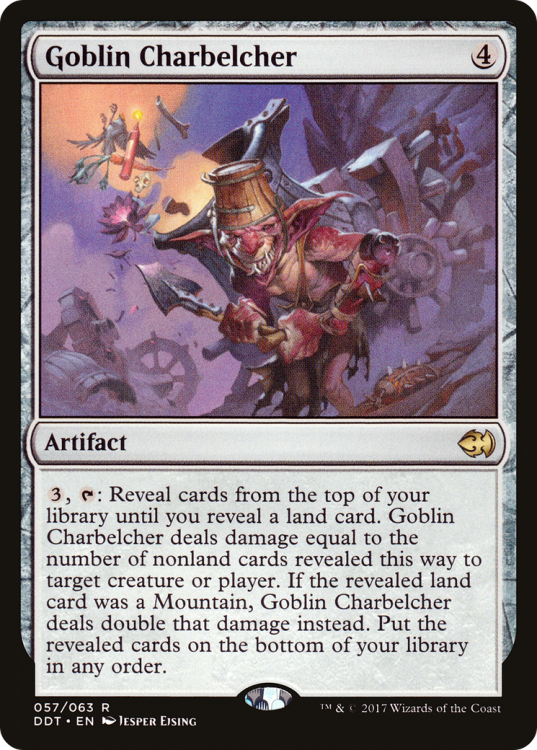 It’s likely pretty obvious what this deck is designed to do – resolve Charbelcher as quickly as possible and then use it’s activated ability. If you have no lands, you just finish off the opponent! However, it’s pretty hard to play Magic with no lands in your deck, right? Well that’s where the new modal lands from Zendikar Rising come into play.

The latest build of Belcher in Modern is designed around Gruul colors, and plays a number of the spells that can ETB as lands. So in your deck they are seen as non-lands, but can be played as lands so you can, you know, cast your spells. In the next part of the plan, the deck runs a number of fast mana spells to power out Belcher and activate the ability — because if you can just cast and activate belcher, you win! So that really is the name of the game.

So… sounds great, right — but how do you make sure you draw Charbelcher? To answer that question —  and before we talk about what any of these darn spell lands do —  I think we need to talk about the real power in the deck — or at least the card that creates a really good backup/selection plan with this build. It’s a little known (to me, at least) uncommon from Morningtide called Recross the Paths. So, the idea is that when you cast Recross the Paths, you get to set up your ideal like… as many cards as you want, basically. Set up a hand of 7! Set up two hands of 7! No one will be able to stop you, and that’s why this deck will be so, so fun when paper comes back.

So, do you have to cast Recross to win? No! Does it help? You bet it does. It’s especially notable because your “Plan A” when you cast Recross the Paths is that you place your single copy of Reforge the Soul on top, so that you’ll miracle on the next turn to draw 7 cards. The idea here is to generally load up your draw on as many Simian Spirit Guides, rituals, Veil of Summer and Goblin Charbelchers as needed to go off the turn you miracle Reforge. But sometimes you actually can’t do it. So. Then you bide your time with extra Veils or whatever.

The lands have varying levels of utility on their spell sides: returning target cards from your graveyard to hand, or dealing damage to opponent’s creatures? Seems good! Casting Turntimber Symbiosis for 4GGG when you don’t even have creatures you need to draw out of your deck? Seems bad! You can really tell something is wrong because some builds run spell flippy lands they can’t actually cast, like Sea Gate Restoration, but can serve as a mana source without actually being a land.

So that’s the deal. This deck can kill on turn two. It can involve a really tedious deck stacking spell. Sure, it’s a little glass cannon-ey, it’s a little maybe more splashy than powerful — but I think there are reasons that people like Sodek and Squachief are willing to pick it up. It’s good enough to be competitive and it’s probably kinda broken.

That’s it for this week. Be sure to listen to this week’s episode for some closer looks at some other breakout decks and cards, and keep an eye here and an ear on our podcast as we continue to watch what’s happening in Modern and Pioneer. Next week we plan to give you our grades for some of the latest decks to see success in the formats, after playing them ourselves!