The Fabricator General: How to Build the Astraeus Super Heavy Tank

The Astraeus jumps out from the Forge World webstore as not only a cool model, but one that has decent rules and works in Primaris only armies which is probably making it one of the more popular Forge World choices. That said, a big expensive resin kit can be intimidating, especially if you haven’t built one before, so here is my guide on how to get from a scary pile of bits to an awesome flying tank. And I have good news for you, this kit is not that hard at all to build! 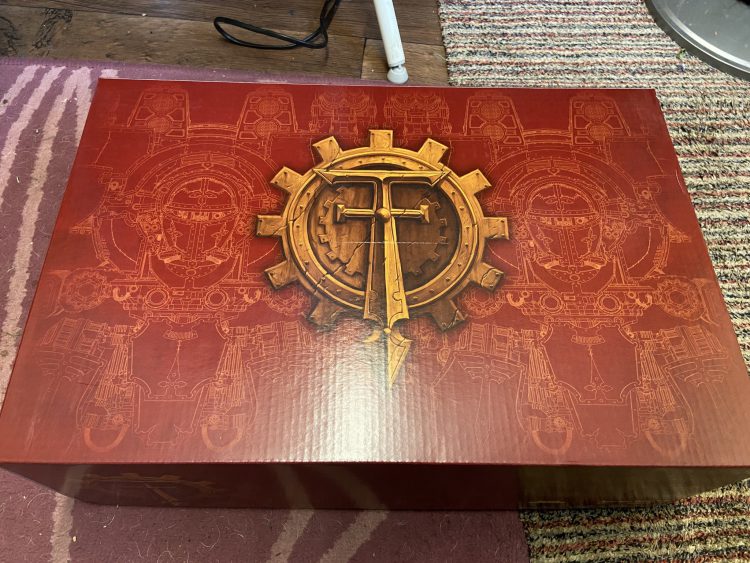 Sure, if you happen to have a dremel and things like that then you could use them, but they are absolutely not needed. I built mine with an ancient pair of GW clippers and an almost equally ancient Privateer Press hobby knife. The one thing you may want to splash out on is a decent bottle of Superglue (I swear by Zap a Gap which I get from Amazon in the UK) and maybe a new washing up brush…

Yes, Forge World resin still needs to be cleaned. When they remove it from the moulds they use mould release agent which is basically grease. This stuff is amazing at repelling paint, including spray primer. Do not skip this step, I have been in the position of having just built and sprayed a very expensive Spartan and watching in horror as the paint just slid off a major section I hadn’t cleaned enough.

I popped every piece of the tank (including the clear resin) in a (clean) sink with some washing up liquid and warm (but not hot) water. I left it to soak for 15-20 minutes and then attacked it with a new washing up brush, using a child’s toothbrush (bought especially for this purpose) for the smaller, more delicate parts. I then left the pieces to air dry. 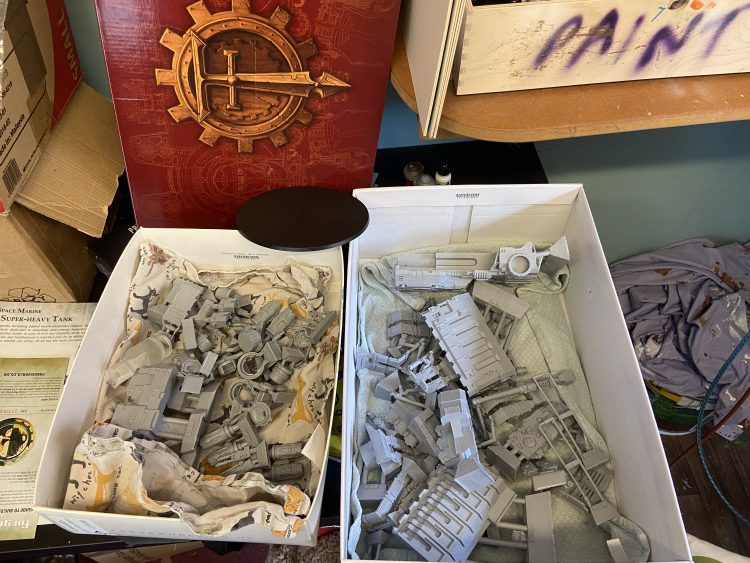 I then went to work removing all of the resin “gates”. These are the weird lumps of resin which are attached to most of the pieces. I did this by clipping at the gate end, rather than the model end. If you clip too close to the model the stress on the other connectors can cause the resin to snap which you don’t want! Once the gate itself was off I then clipped off the connecting rods. This took a long time…

I then went through each piece with a hobby knife and tidied up where I’d clipped them and any mould slippages. This was not hard but did end up giving me blisters! 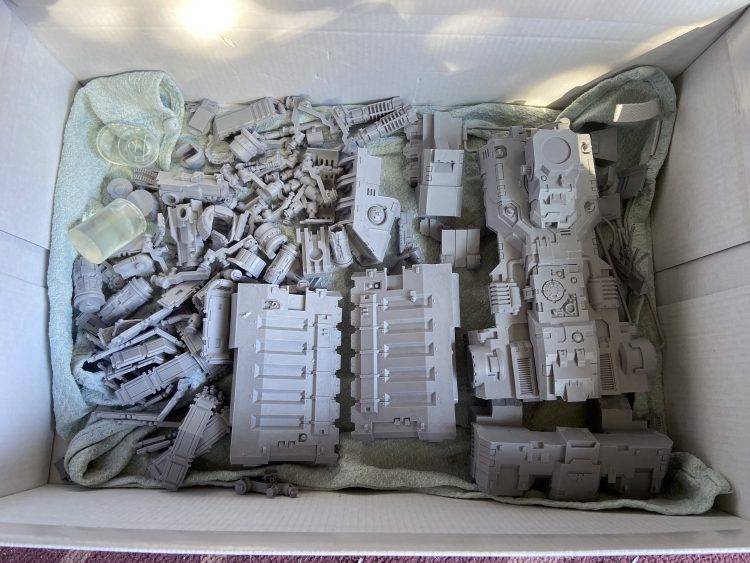 You can tell whether your Forge World kit is going to be easy or hard to assemble by looking at the instruction booklet. The older (more awkward) kits have a photocopied sheet of black and white paper with vague hints on where things should go lovingly thrown in the box, whilst the newer, computer designed kits have gorgeous full colour assembly booklets more akin to what you may be used to in a plastic kit. The good news here is the Astraeus has the newer instructions and they are pretty simple to follow.

First of all I went through the turrets that could have alternate weaponry and popped magnets in them. Normally I don’t worry too much about magnetising and just go with what looks the coolest but on a kit this expensive I don’t want to be stuck with rubbish guns because I was lazy! 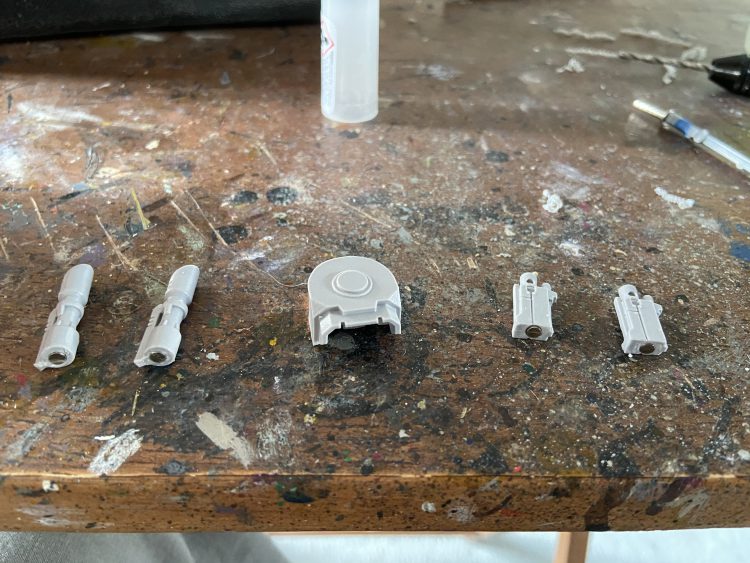 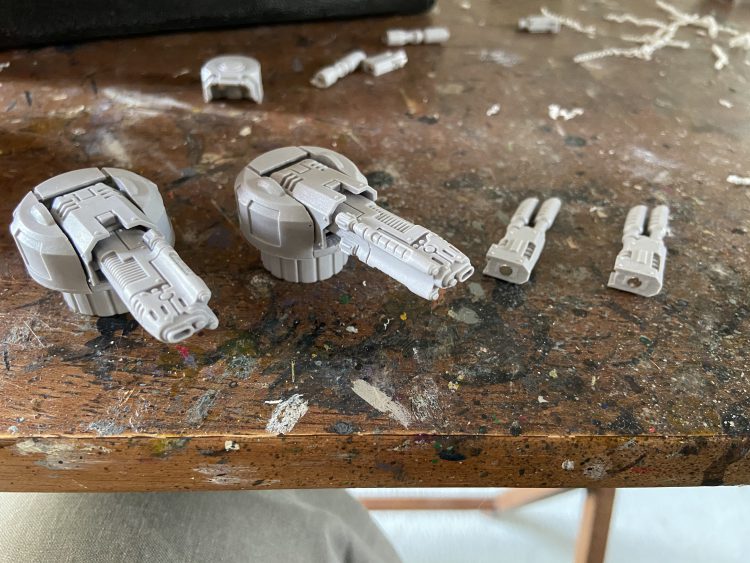 Next up comes the main turret. This is fairly simple and comes in 4 or 5 fairly big chunks of resin which fit together quite easily. Then you add the accessories like the stubber and the hatch on the top. 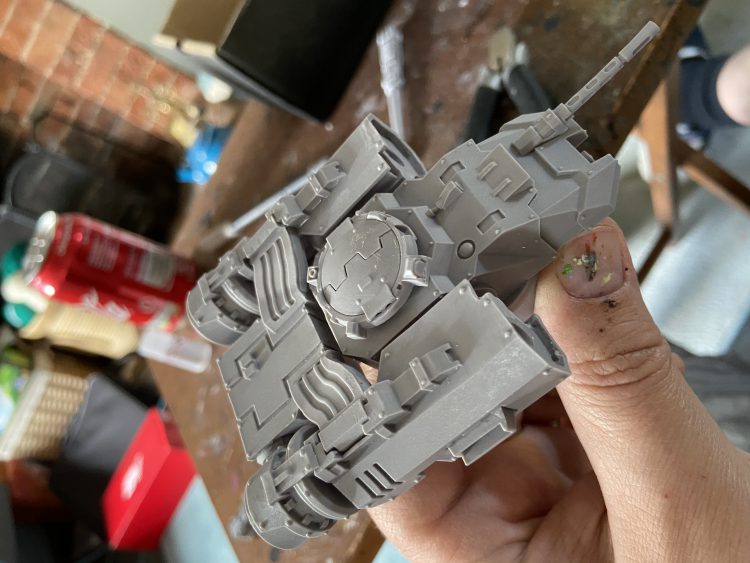 Next I came to something I’d been expecting, warped guns. Actually these weren’t too bad but still needed some fixing. First I boiled the kettle and then once I’d made my wife a cup of tea I boiled it again and poured a mug of hot water. I dipped each gun in the water for 30 seconds or so, holding them at the top so they were vertical. Once they’d gone pliable I pulled them out and pulled gently on both ends to try and get them to be as straight as possible. 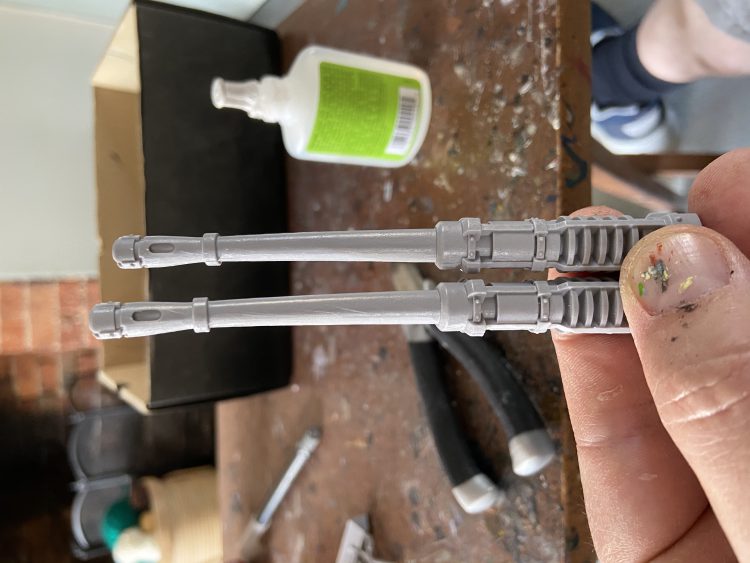 Then it’s just a case of popping them in the turret. I considered pinning these as they seemed an obvious break point but the join is pretty well designed so I didn’t bother. 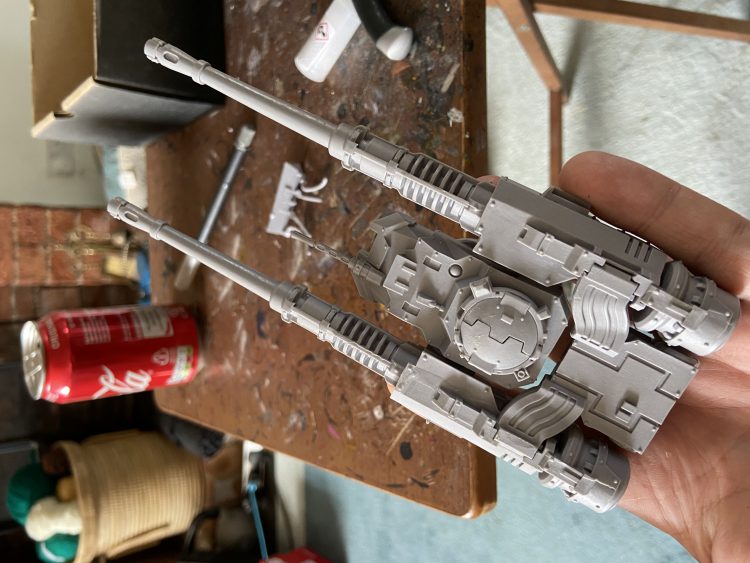 Now comes the main bit of the tank. This is 8 or so hefty pieces of resin which fit together fairly easily. I covered each piece’s connecting surfaces in a decent amount of superglue and held them together until they were well and truly stuck. It’s important to get these pieces as tight as possible to avoid gaps. At this point I had managed to cover my hands and most of my shorts in superglue so maybe be a bit more careful than I was. 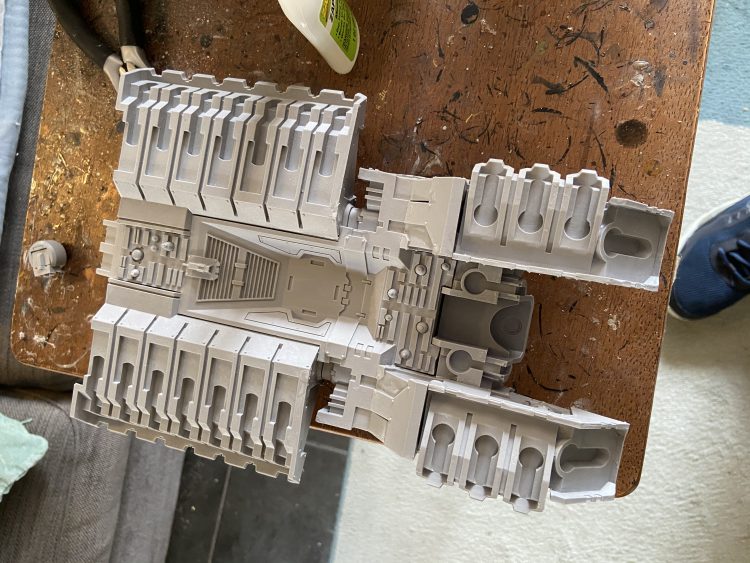 I still have some gaps here, but when given the choice between gaps on the bottom or top of the model I’d rather have them where they can’t be seen.

Next it’s just a case of attaching all of the accessories to the tank. 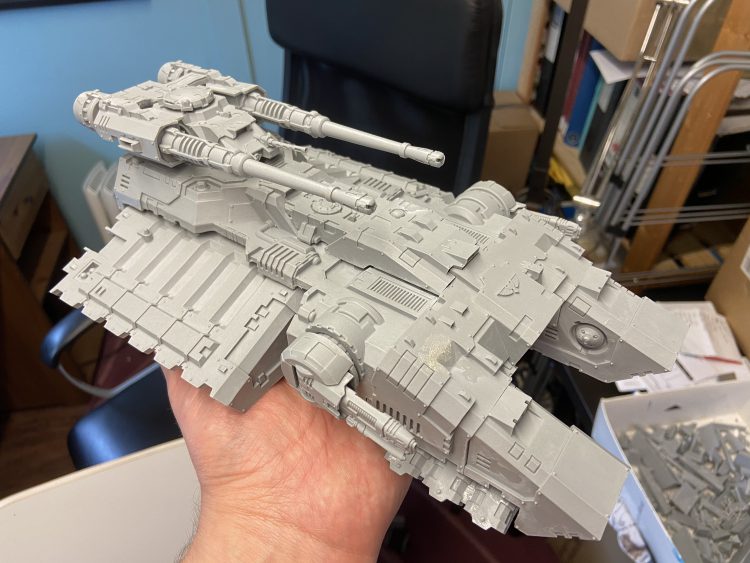 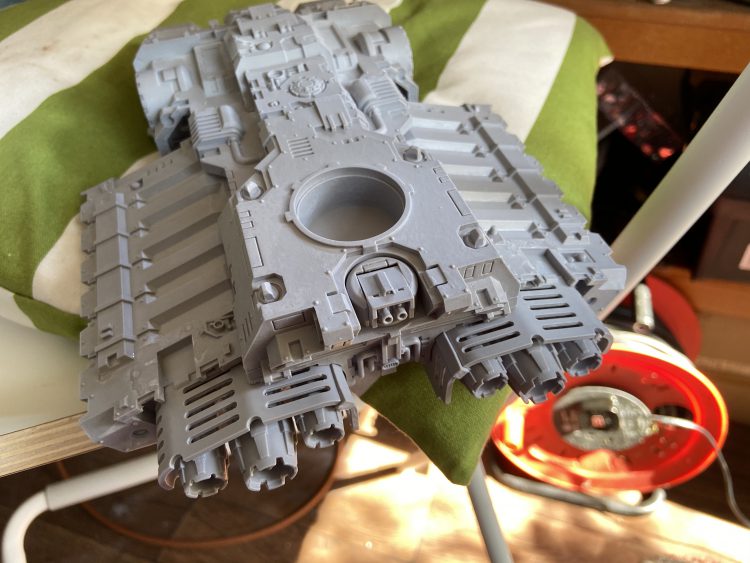 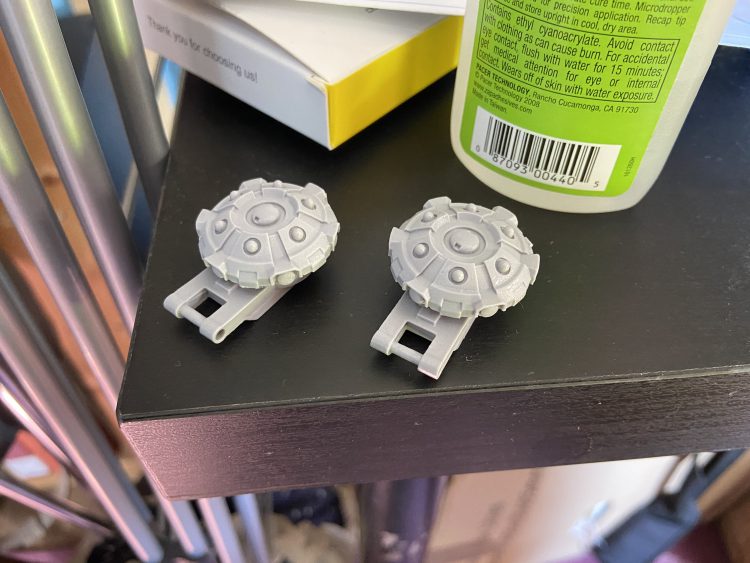 I left the top turret and the side ones unglued so that I could paint them seperately.

I assembled all of the repulsor plates on their connecting brackets and left them off the model. Trying to paint these when glued on the model is an exercise in pain and misery so I’d highly recommend painting these separately! It’s quite easy to work out which bracket goes with which plate by dry fitting them. In total there are only 4 different combinations. 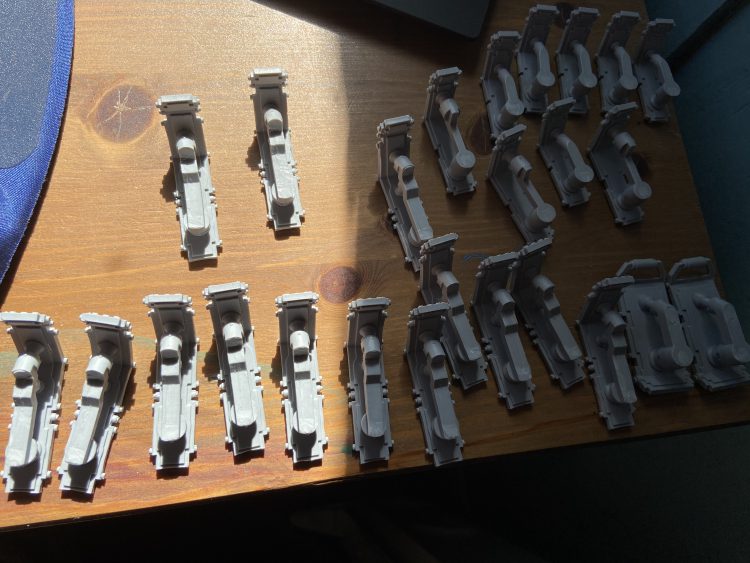 Whilst I tried to avoid gaps, I was left with some obvious ones on the main hull. I filled these with greenstuff and tried to get it as smooth as possible. Honestly, even after sanding and lots of flattening this still looked rubbish and I wish I’d just left the gaps, but paint can hide this I hope! 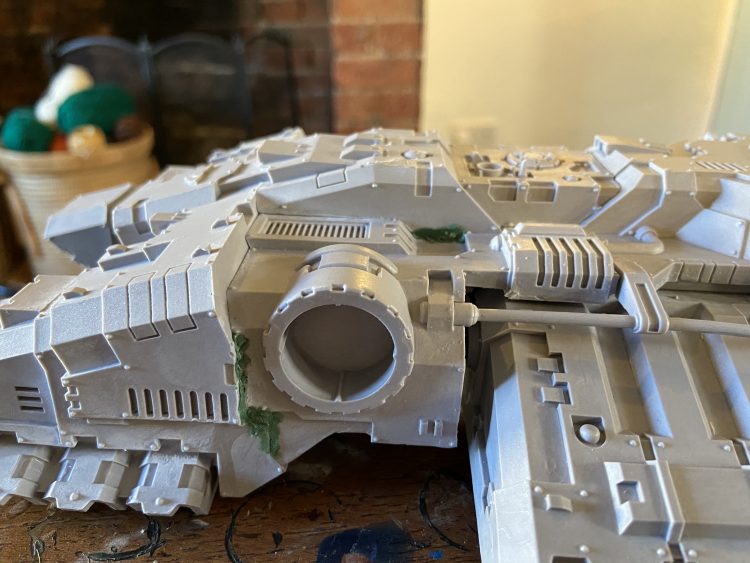 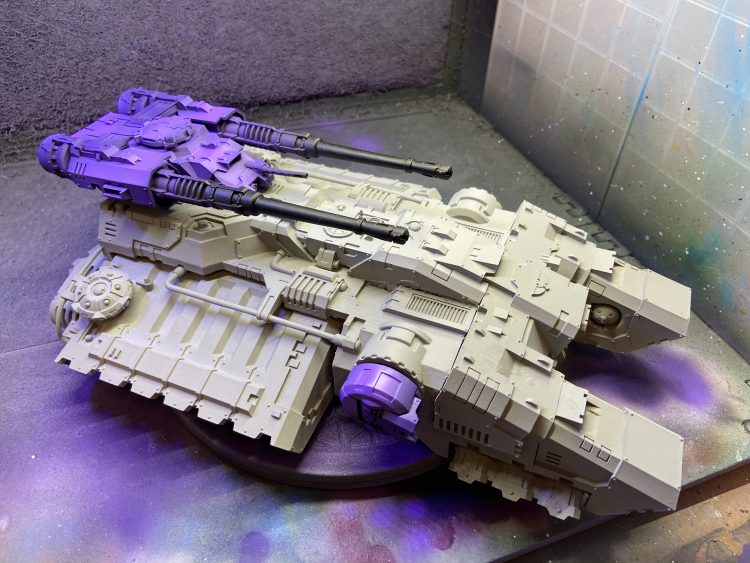 There you go. This really isn’t that complicated a kit and is a great first build if you’ve never worked with Forge World resin before. Plus it’s awesome and you can fly it around the house making pew pew noises.

Editor’s Note: Join us in the future for the second part of this – How to Paint Everything: The Astraeus”

And if you have any questions or feedback, drop us a note in the comments below or email us at contact@goonhammer.com.