An article by James "Boon" Kelling    Battlefleet Gothic Hobby How To Paint Everything Tutorials    February 15, 2021    0

In our How to Build Everything series we look at how to build well, everything. As the Koronus Expanse BFG/40k campaign kicks off we thought we’d discuss how to create the vast devastated worlds, cold gas clouds, and dense asteroid fields that will inhabit this war-torn frontier sector.

Celestial Phenomena of the Koronus Expanse

Honestly, any good terrain building starts with a pilgrimage to the nearby hobby or home improvement store – ideally both. Literally just walking down an aisle can spark a myriad of ideas for terrain building. Fortunately, you won’t have to walk down aisles aimlessly though because BFG terrain is super simple to build, and you don’t really need much to make a good looking and functional board. It starts by finding the Styrofoam.

This is what it feels like to stare upon creation

Asteroid fields are probably my favorite piece of terrain in BFG, and not just because I play Eldar. They are a potentially dangerous, but useful element as they are one of the few line of sight blocking phenomena in the game. Many ships do not want to risk navigating the asteroid field while others may use it as a safe haven. Moreover, they are incredibly easy to make. Simply grab some styrofoam balls of various sizes, slam them into a flight stand at different heights, glue them in, and start chipping away at them with your favorite sharp object.

Chipping away with my handy dandy scissors

All set for paint

Like everything, I start with a black base and in this case, unlike my Biel-Tan, it actually makes sense. The spray paint I apply first helps to eat into the foam and give it a bit more of a rocky feel. Afterwards I’ll fully coat the rocks in black. Then by drybrushing, I’ll layer up two shades of brown until I’m at a medium brown with black recesses. 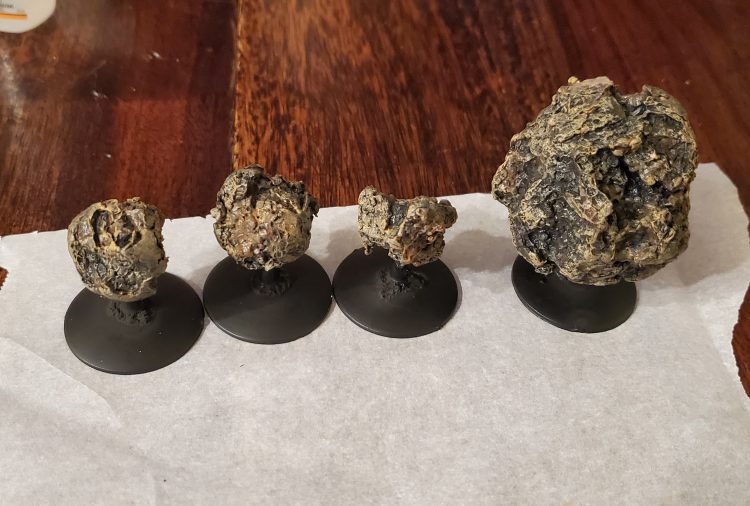 Painting up from brown before applying grey and white can really give your space rocks some depth.

Once I have the rocks at the above color, I’ll apply a drybrush layer of light grey, and then a real quick, thin layer of white on the raised portions to make it pop. Honestly, the longest part of this is going to be the paint drying. About as thrilling as reading a Liam Granbery post.

You can honestly use almost anything for this – but one of the things that you’ll want is a ‘functional’ board. The absolute best looking gas clouds and warp rifts are large cotton clumps that have been stretched and painted to resemble colorful clouds of space dust or ferocious whirling maws of an open portal to the warp. Unfortunately, for as fantastic as these look, they can also be a little hard to place ships on and move through. So for that reason I opted for the next best thing – cut up and painted plastic card. I’m only going to show the gas clouds – but the warp rifts process is basically the same but the shapes are a little different.

Plastic card – thick enough that it won’t curl with paint

What do you see in the clouds?

Typical black undercoat, but from there feel as creative as you want to be. Any colors you want. Purples, reds, blues, greens, oh my! I use spray paint but use whatever you want, airbrush, brush, whatever. Put some color down in a mixed gaseous way. Then grab your thick brush, dip it in white, and flick the bristles to put some stars on these bad boys. Once then, a real thin, lightly covering parts of the template final layer of spray paint and voila! A starry backdrop nebula/gas cloud/warp rift.

Planets and moons are probably the most sparingly used terrain element. If they’re in the game then they kind of become the focus of maneuvering – that’s probably because they block line of sight and can give some significant movement advantages. But oh my god are they easy to put together. Like everything else, there’s a few options here. Flat, 2d terrain, half-spheres (recommend these), or full spheres as I have used.

Unlike with the asteroids, you don’t necessarily want the pitting that comes with spray painting – so if you don’t want that texture, applying a layer of PVA glue beforehand can reduce that risk. Unlike my example however, sanding the equatorial line is advised – it will show through.

Pretty much everything I do starts with a black base layer

Paint it up however you want because it literally doesn’t matter. The cosmos are a crazy place. That said, if you’re looking for inspiration, consider checking out NASA’s images site, where you can get some incredible images of celestial bodies.

I wanted to give a hive planet look – so I added some details and then applied a ‘dark’ side to the planet by spray painting black from a fixed position on one side of the planet. And done!

Like the rest, you have options here. That said – for what you’d spend on building and painting a board I recommend and think you’re best off just buying a neoprene mat. It looks great, dice roll well on it, it has an appropriate amount of friction on the surface, and you can swap it out with another mat when you want to play some 40k or something else. The only real downside is that your options are limited for prints.

That’s it for now but look forward to more HTPE: Koronus Expanse for additional ideas around the fleets of the Koronus Expanse! And if you have any questions, tips, or feedback, drop a note in the comments below or email us at contact@goonhammer.com.