Following the release of the recent Space Marine codex, GW have followed up with a 4-week FAQ (yeah these are 4 weeks now rather than 2, who knows why). They also updated the Ultramarines and Black Templars FAQ/index documents to catch a couple of errors that were in those.

A lot of people have been anticipating the release of this FAQ – will Eradicators be nerfed? Will the Apothecary/ATV interaction be fixed? Will whatever other pet issue I’ve decided is definitely getting erratad inside of a month be changed?

The answer to any of these questions is “no.” Instead, there’s really just two key items here:

Obviously the first is a travesty of justice and the latter is complete vindication of all my dearly held beliefs. Speaking realistically, as soon as the chapter litanies were not included in the new codex and didn’t show up in the new SW book, that was pretty much curtains for them, and it’s probably fine that Space Marines don’t get one more free thing. I will mourn thee, Strike Off the Head.

Other than that, the remaining errata are just clarifying that the Primaris Apothecary is, in fact, an Apothecary and so can be the Chief, fixing the jacked-up wording on Heavy Intercessors so they can actually take their heavy weapons (expect an identical errata for the Deathwatch book, which also has this written wrong – whoever switch-hit the weapon names right before release did a really great job of this particular change), and adding the option for Blood Angels Assault Squads to take plasma and melta guns because stuff from 5th edition can never, ever be allowed to die.

All in all, the main question that this FAQ didn’t answer is ‘why did this take a month’ – it all seems like simple bread and butter stuff that could have been changed a fortnight ago.

Over on the screaming maniac knight side of things, Black Templars also got updated, and good news – they got their doctrine back! 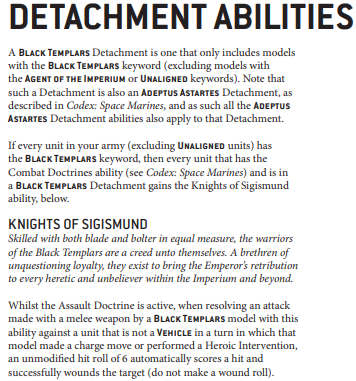 This was conspicuously missing from the previous index document, so it’s nice to see it return.

Other than that the tweaks are minor – The Emperor’s Will was adjusted to definitively state that you can shoot with pistols after Advancing, and that’s about it. Witchseeker bolts still don’t work properly.

Finally there’s Ultramarines. It’s genuinely hard to tell what’s changed here, but there’s at least one error immediately, which is that it tells you to change the rules text of one of Sicarius’ abilities that he doesn’t actually have. So that’s great. That may actually be it, even.

Overall a round of FAQs that mostly makes you ask “why”, though it’s nice to have unambiguous answers to the litanies/points thing and an unalloyed good for Black Templars to get their special doctrine back.