The GW US Roadshow Finale, Day 2 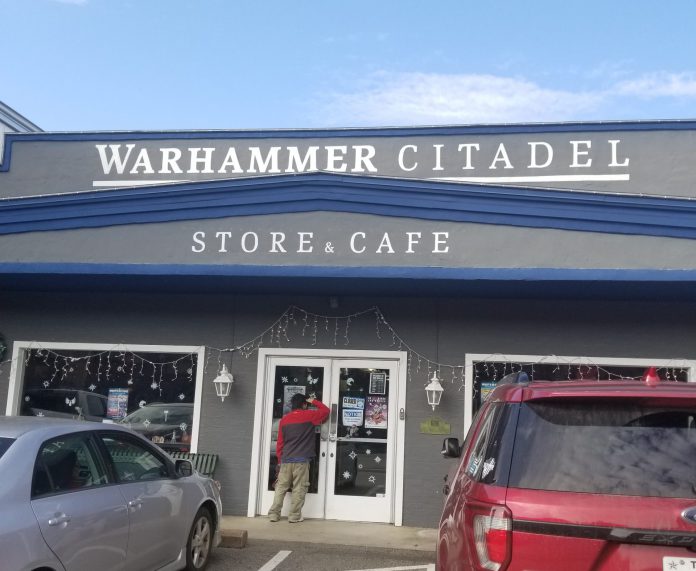 Welcome back, Dear Reader, to Day 2 of our coverage of the GW Roadshow event. I’m going to level with you: I don’t have another full day of live blogging the event in me. For one, I’ve already revealed the sweet, sweet secondary objective changes that were the precious secret of the event. And for two, I’m going to spend some time with my family today, and also flying back before the event ends. so my plan is to post a bunch of photos, swing by for a bit, write an update, then head out. You’ll be able to watch the finals streamed on Twitch, but I will offer some thoughts on Chester vs. Cheema and some of the other games before that.

The Age of Sigmar Tables

First off, it’s worth noting that there were also 8 invitees for Age of Sigmar, with a similar selection process to that of the 40k invitees. Unfortunately, because Warhammer Community’s coverage of the event (or the ones prior) didn’t think to actually name these participants – or any of the 40k players for that matter (we know them because of Boon and Dan being participants), I don’t have their names yet. But what I do have are photos of the beautiful models they brought along.

Likewise, there were some incredibly rad 40k models at the event, with my favorite being Blake Law’s Imperium Army featuring some insanely cool yellow knights and admech with checkerboard designs very similar to Lamenters. The scheme looks great and has been painted wonderfully.

The Warhammer Cafe in Grapevine

We recently ran a review of the Cafe in Los Angeles and so I was interested in seeing how the Grapevine location – built earlier – stacks up. There’s a lot of cool things to see here and a fun vibe. It’s still more store than cafe, but the hobby space is large and welcoming and there’s a ton of cool stuff to see. I don’t know if it’s worth making a trip to it just for it’s own sake, but if you’re in the area, it’s worth stopping by.

Alright so let’s talk about the invitational championship battle between Mani and Brad. Earlier in the year Craftworlds looked like a solid meta counter to Drukhari, back when Craftworlds shooting could act as a strong counter to Drukhari vehicles, making combined Aeldari forces a powerful force. That’s not so much the case with the current “Thicc City” builds that just throw a mountain of tough-to-wound, damage-reducing, multiwound models at the middle of the table. Brad’s got more of an uphill battle against Mani than he did against Jack, though he does have a speed and mobility edge over Mani’s quick but mostly footbound army. Also working in Brad’s favor is that Mani just isn’t all that experienced with the faction – he hasn’t played many games with them yet and it means there are likely going to be missed opportunities for him as he plays them – he just found out yesterday for example that Power From Pain allows vehicles to ignore the penalty for shooting Heavy Weapons in combat starting on Battle Round 3.

The downside is that the mission strongly favors Mani. It puts three objectives on each side of the table, rewards killing units, and thanks to Mani having access to a Codex secondary means that he won’t need to move – he can force Brad to come to him using Engage on All Fronts. He can take Raise the Banners, To the Last, and Herd and basically passively max out his objectives unless Brad takes the fight to him. That’s not good.

Brad’s list was a bit of a mystery – I’ve asked him for a copy, and this is what he was able to send over in the time he had. It’s a pair of detachments, one custom and one Ulthwe, and from what I can tell it just plans to max primary points while annoying the hell out of the opponent. 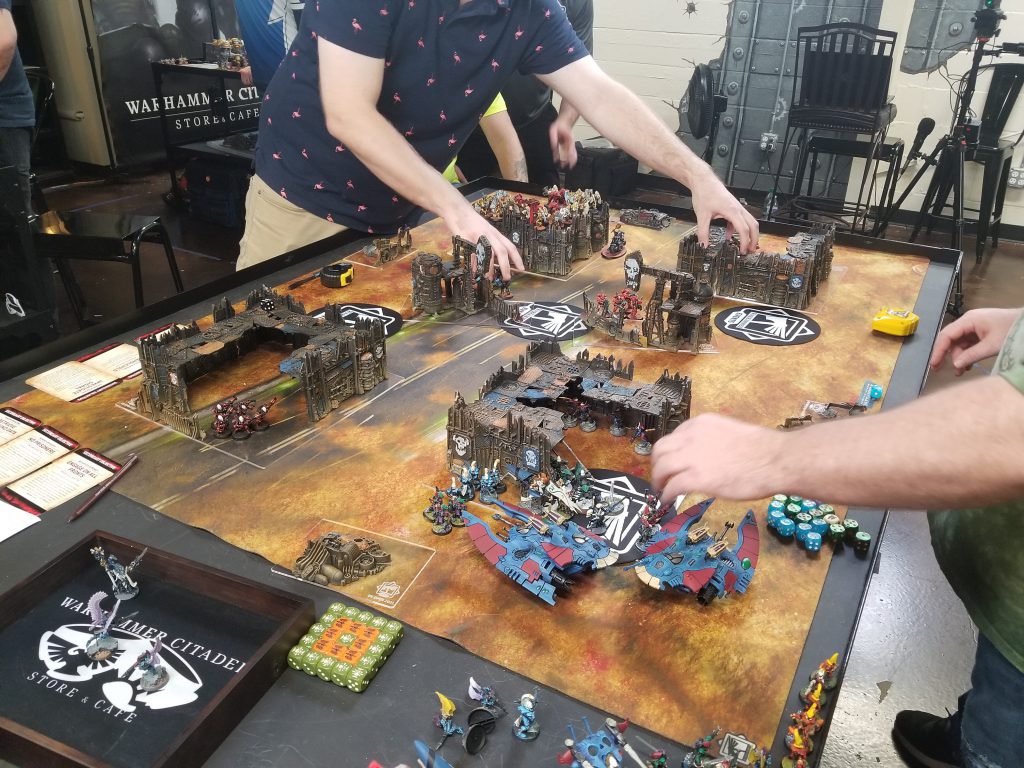 My Prediction: It’s a tough game but I think Brad wins it thanks to more familiarity with his list and the match-up. If he does pull it off, it’ll be interesting, since it means Craftworlds players could have just been winning all along, and just didn’t want it bad enough. And that is obviously the only takeaway you could have from this.

The consolation bracket match-up arguably has more at stake; while Mani and Brad are vying for some bragging rights, James and Jack have squared off twice this year and come away with a 1-1 record, and James is apparently the only non-Art of War player to beat Jack this year. That makes this the RUBBER MATCH, wherein an actual champion will be crowned. If you consider Jack’s Blood Angels a handicap, you could argue that a Harpster win over Kelling arguably puts the debate over who is better to bed entirely. Good luck, Boon. 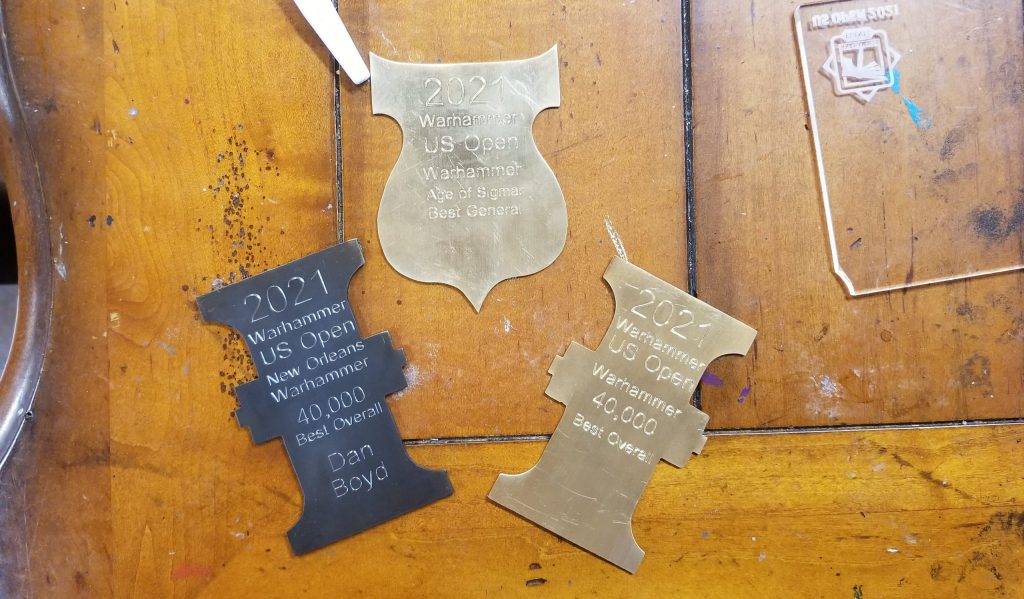 Finally, I should point out that the plaques for the big GW trophy have been finalized, save the one for the invitational winner. Most of this weekend’s participants aren’t on plaques, since Siegler’s name is on three of them, but this Cheema/Chester matchup is worth some engraving.

UPDATE: The Games have Changed

OK so update on all this – most of this isn’t happening. They’ve changed the final games so now Dan is playing Boon again, with his comp list vs. Boon’s exhibition list while Blake Law and Jack Harpster are going to play in a pair of AoS-vs-40k exhibition matches. The one to watch among those is Blake’s matchup with Knights going up against Gargants.

That’ll do it for my write-up this weekend. A big thanks to everyone for stopping by to read it, and if you have any questions or feedback, drop us a note in the comments below or email us at contact@goonhammer.com. We’ll be back later this week with a round table on the new secondaries so stay tuned for that.