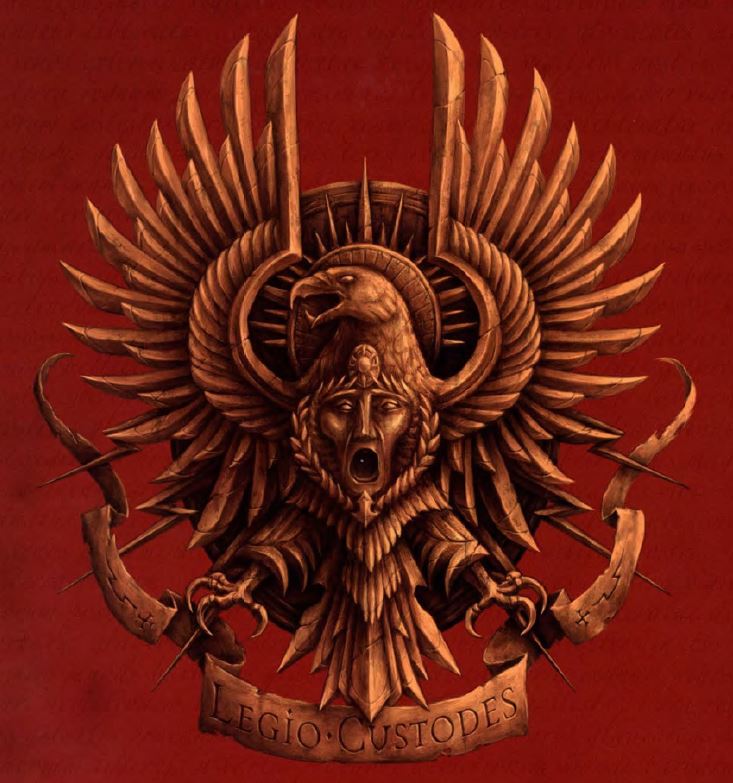 The Watchers of the Throne

The Adeptus Custodes is an institution that teaches self-reliance, and absolute focus on a single primary objective.
Over the 11 thousand years of their existence, the Gilded Brotherhood have striven to perfect the arts of protection, both close-in and through force projection to the furthest reaches of the void. Naturally, with the vast majority of the order restricted to the Sol System both prior to, and a result of the M31 Horusian Heresy; the galaxy has more of less forgotten the infinite reach of the Emperor’s own guardians, and has been allowed to descend back into unmediated, and constant conflict. No more do golden demi-gods appear on battlefields to humble the greatest orkoid beasts and cow the arch and posturing eldar, the last public execution of a traitor to the Lex Imperialis is no more in the living memories of the Imperial Citizen, even if the blood stains still seep into the stones. The Custodians have retracted, or perhaps, they have been shattered and only a mere handful remain to carry out their most sacred vigil.

The Custodian Guard has chosen to let this assumption stand for millennia, and utilize this slight misunderstanding as a potent weapon of surprise and subterfuge. Following the losses and missed cues of the Heresy, a cabal of former Malcadorian acolytes approached Captain-General Valdor with a proposal; in order to protect the person of the Emperor, and the spirit of his domain- his most capable warriors must strike out beyond the traditional reach of Imperial force.

Valdor, at the time had many items of care on his mind; and foremost among them was atonement. The Emperor that strode the stars was no more, and with that ending, the flaming sword that had illuminated the Imperium was extinguished. The Captain-general clove tight to hope; selecting 49 of the newest inductees to his order, favoring those who had yet to undertake a Blood Game assignment, Valdor established the Judan Sodality, pulling in an additional 49 custodians who had held operational authority, assigning overall leadership to a hypaspist known as Peteinós. This new Sodality was an alloying of the new and the old orders, and involved the direct induction of 25,000 men and women of the palatial inhabitant, throwing the net of induction wide and deep in order to pick up “A truer flavor of Humanity”. Far from a symbolic gesture, or even a cynical draft of cannon fodder; the inclusion of mortal soldiery and support staff into the chartered deployment was meant to carry the embers of the Imperial Truth back into the shattered Imperium, and allow for a future recruiting pool to enable maximum self sufficiency. Peteinós had been observing the deployment and tactical operations of the fleet-based Legiones Astartes, and planned on incorporating their model of rapid deployment, coupled with just-in-time resupply into his own forces. Commandeering the Battlefleet Solar ceremonial ships “The Leftmost Cerberan”, and the “Merican Dust”, while aggressively petitioning the Mechanicus for use of the “Bayerix”, Peteinós gathered his troops and equipment amid the floating debris of the Cradle World’s ruined defenses. Together with a small attached victualing force and a number of outrider ships, the Judan fleet took on crew and supplies over the course of three standard years in preparation for departure. The Leftmost Cerberan
and
The Merican Dust

Upon the completion of victualing duties, a stillness came over the flotilla, final checks were made, and both mortal and immortal Imperial servants reflected on the tasks ahead of them. Cast off was set to coincide with Terra’s Autumnal Equinox, an affectation of ancient history where Climate still mattered. At 2000 ship time before departure, a small launch docked with the Leftmost Cerberan, and a massive robed figure was brought into the command deck’s briefing chamber. Once the officers and worthies of the expedition were gathered, Constantin Valdor made his final delivery and presented the ultimate commands to Peteinós and his tribunes. In addition, a simple roll of vellum was placed upon the strategic hololith. It bore a single icon:

With this token delivered, Valdor made his departure. Bells sounded throughout the fleet and oaths were sworn. As the tender hatches sealed and the mooring lines to fueling barges and tenders were severed, the Custodians of the Judan Sodality reflected on their tasks ahead- Peteinós clutched his letter of marque and thought of the opportunities he now had to deliver sanction and salvation to the lost threads of His Imperium. The fleet broke for the Mandeville point and charged their warp capacitors. With the howling whine building in his sinuses, Peteinós imagined his options were now grand, indeed.

9,000 years of service and counting

Maybe We Should Take A Break

Because Peteinós  and his custodian brotherhood have been constantly deployed with, and surrounded by mortals for most of their service, they have adopted many traits and behaviors of a distinctly non-custodian flavor. Throughout their travels, they have developed contact with a number of the so-called Eyes of the Emperor and kept open lines of dialogue with both the Palace and the Inquisition. On all occasions of personal exchange, Peteinós has been reprimanded for his common behavior and attitude, his detractors believing he needs reminding of where he was made. Both the leader and crew of the Judan Fleet do not see necessity in courtly behavior outside of building new alliances, and securing new lines of supply.

Notably, the Custodians of the Judan Sodality are an exceptionally pragmatic and earthy group.

FORCES:
The Judan Sodality is a hybrid force of both standard Adeptus Custodes and an Auxiliary force of bonded mortal soldiery.

The Sodality has been deployed for 9,670 standard terran years, with adjusted time for warp travel making it about 4,208 by the crew’s count

The Sodality has established at least one permanent settlement within the Segmentum Solar.

Since the receipt of the Letter of Marque, Peteinós, and his subcommanders have diversified their main force to include the “normal” retinues of a successful rogue trader dynasty. Peteinós  has never directly Peteinós with many of his subordinates.

The custodian leadership of the Judan Fleet (the cover identity of the sodality), is known to select sub-commands within the dynasty. Specific knowledge is restricted to combat and intelligence personnel, though through some unknown subterfuge, or ludicrious disguise, the Custodians are able to mingle freely with the mortal personnel.

The Sodality prefers surgical attacks with a minimal reliance on heavy equipment, this is largely due to the unwieldy nature of heavy deployment, and the high overhead associated with maintenance and repair.

Author’s Note: Every few centuries or so, Peteinós has serious hero worship issues with Constantin valdor, and will at times, reenact his method of dress and combat style on the battlefield. This behavior goes against the strenuous objection of his command and intelligence staff. Peteinós can be deployed as either a standard looking Tribune or in full Captain-General getup.

I want an infantry heavy force for this – maybe 2-3000 points total.

I will plan on including at least 2 dreadnoughts into this force, and maybe a mob or two of sentinels

Every troop will be unique in appearance and place within the fleet. I want a really funky mixed force here.

There were 100 custodians when they set out, and they picked up maybe a dozen Eyes, over the 4000 years of operation they lost a few, so the tabletop representation will be relatively light.