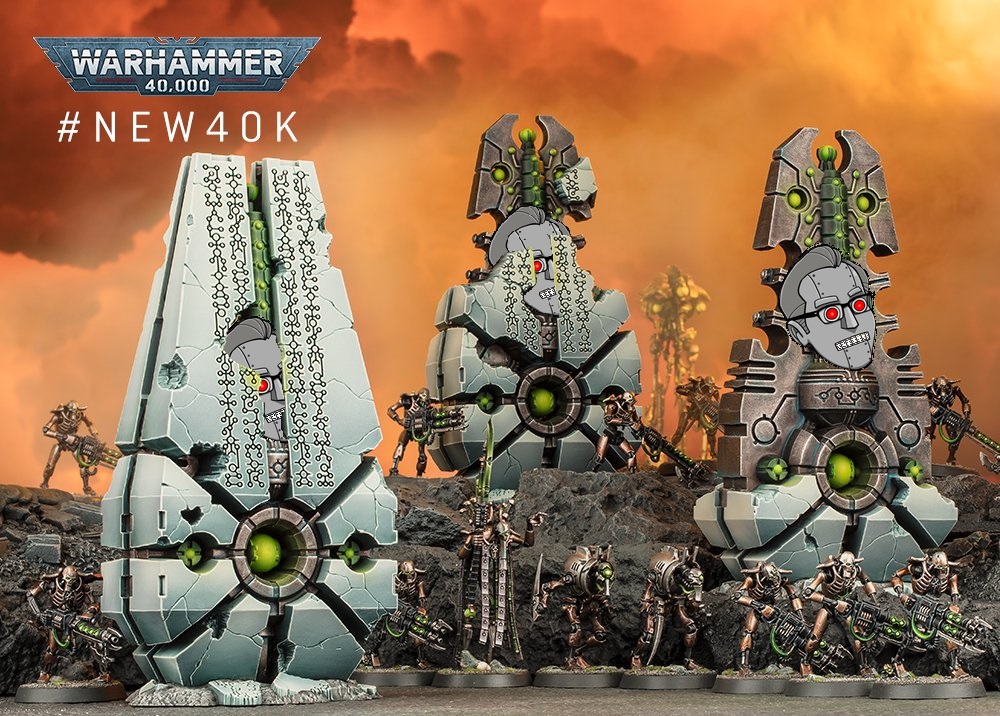 While Goonhammer’s A-Team is busy going through the new Necrons Codex properly, we’ve dispatched our B-Team to offer a look at the new Datasheets in the books. Clearly with a big 40k release like this you want to do the best possible job, so here are, uhh, the Adeptus Titanicus guy who prefers his robots to be a hundred metres taller, and the “jokes” writer.

Hello friends, it’s the next post in your least-favorite series, the one where the jokes are still bad but also the information isn’t good either. Here’s Greg and Condit with a bunch of different mummies from space, and we regret to inform you that this post carries a terrible curse, so if you read it beware (the curse is that you will have read our posts). 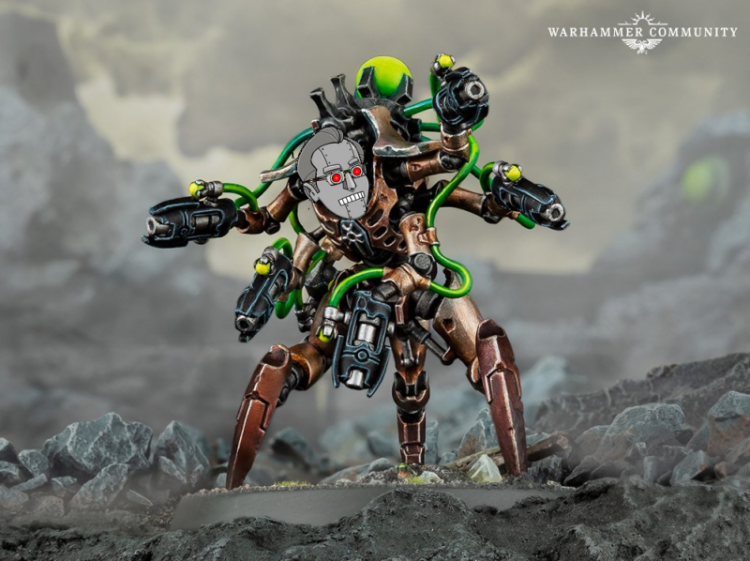 Greg: The coolest part of the new Necron aesthetic is that they’ve unlocked all different type of new skeletons. Just killing it in the skeleton game, and Johnny Six up here is easily the coolest new type of skeleton technology.

Condit: I like that they went absolutely all in on the “six-shooter” aesthetic here, even going so far as to give him six eyes to track his six targets that he shoots six times with his six guns. They really missed an opportunity by only making him T5 W5, if you ask me.

Greg: I don’t even know where to start with this one. He does one thing, and one thing only, which is mag-dump pistols like he’s the Cyber-Mummy of John Wick. Six guns that hit on 2s, re-roll 1s, and ignore all penalties to hit, including during overwatch, and can fire again if something dies, which it probably will. So sick.

Condit: It also shares the Deathmark strat that lets it pop out and ambush anything that attempts to deploy from reserves. I’m imagining a bunch of Genestealer Cultists deploying from Cult Ambush only to see a chair spin around and this guy look up at them saying “Oh, I didn’t see you there” right before he blasts them directly into the game three tables over. 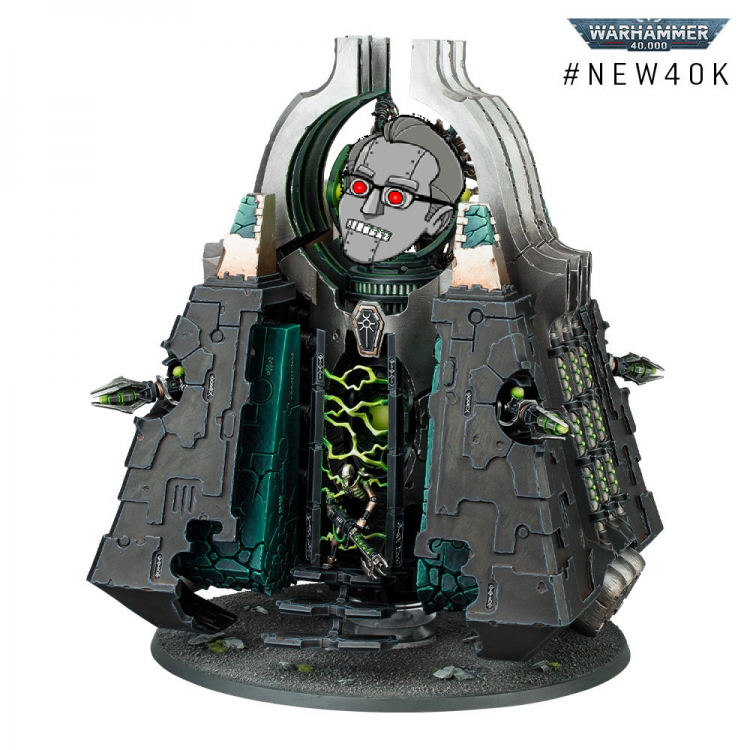 Greg: Completely insane. Death Rays all over the place, more wounds than before, and the portal can eat people and puke out robots. I love my hungry pyramid son. T8 W24 2+, and with Living Metal it regenerates a wound every turn, so he should stick around long enough to grow big and strong and take over the family business (corner biotransference store) eventually.

Condit: This is now the most durable unit in the codex thanks to the addition of what has to be the most potent defensive rule out there: the Lord of War slot. After all, you can’t kill the thing if it never gets deployed to be shot at.

Greg: It’s legitimately amazing to me that they did this. The Monolith is one of the oldest and most iconic Necron units, they’re giving it a stunning new model with massive offensive and defensive upgrades, and then they do the one thing that guarantees it never sees the table. Utterly baffling. Imagine paying 3CP just to hope you can find a 12”x12” square of empty table to plop this sucker down. Surprised they didn’t just make it a fortification and send it back to bed for another 60 million year torpor. Christ.

Condit: To be honest if I played Necrons I’d field it anyway, if only so I could chase people around and try to eat them with the new Portal of Exile melee weapon. It’d be like playing Hungry Hungry Hippos if the little balls were Space Marines and the hippo had a gun.

Greg: 360 points (380 with Death Rays, which you should take because, I mean, obviously) to threateningly hover 8” a turn and devour a squad of Gravis is maybe not the best play, but I can’t honestly say I disagree with you. This is like Indiana Jones being chased by the boulder, except the boulder moves at walking pace and it was so expensive that they had to sell off every other trap in the tomb to afford it. 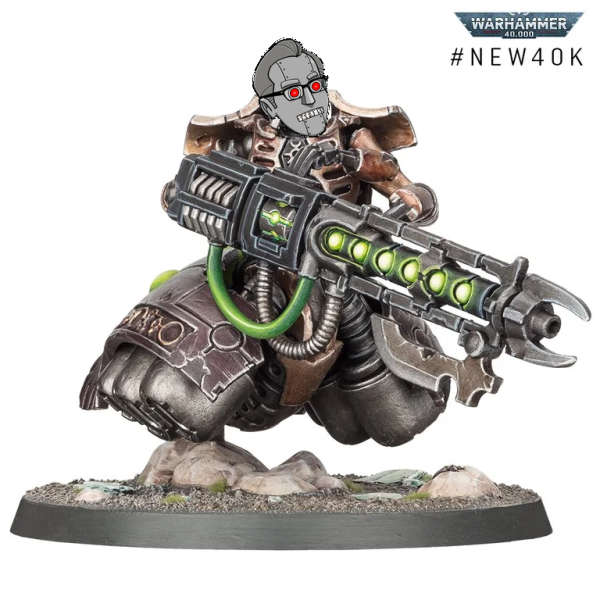 Greg: Daaaamn. Someone vent this dude’s butt before it pops. Clearly Big Boy Season didn’t stop with the Space Marines, and we’re getting double-stuffed Necrons too. I’m bummed that we haven’t seen what this absolute dumptruck looks like from the back, but fortunately it’s so wide you can see it from the front.

Condit: I wonder if it comes with a beeping sound effect for you to play when it falls back.

Greg: I wonder if it has an Instagram where you can thirst-fave pictures of it.

Condit: Not that I checked, or anything.

G’reg Shard of the Void Dragon 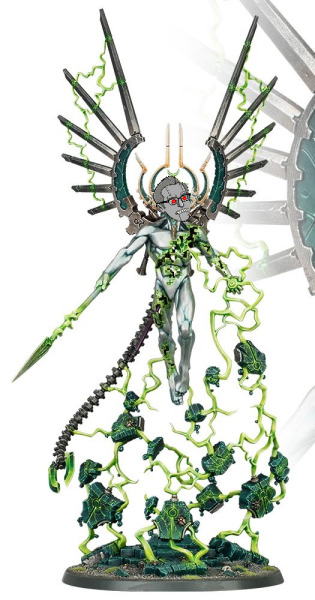 Condit: Honestly putting Greg’s head on a fragment of a cosmically malevolent star-god enslaved to the will of omnicidal space zombie pharaohs is a decision that is going to haunt me until the day I die. His Matter Absorption ability turns that spear into an extendable fork he can use to pick up tasty morsels out of the wreckage of vehicles he destroys, and he’ll have no trouble killing them with its S9 AP-4 D3+3 damage profile when he points it at a tank. Plus, he can only take 3 damage a phase and heals 1 in your command phase, so he’ll be a pain to take down.

Greg: Yo, Overlord, get me outta this wack-ass crystal prison.

Condit: Under no circumstances. 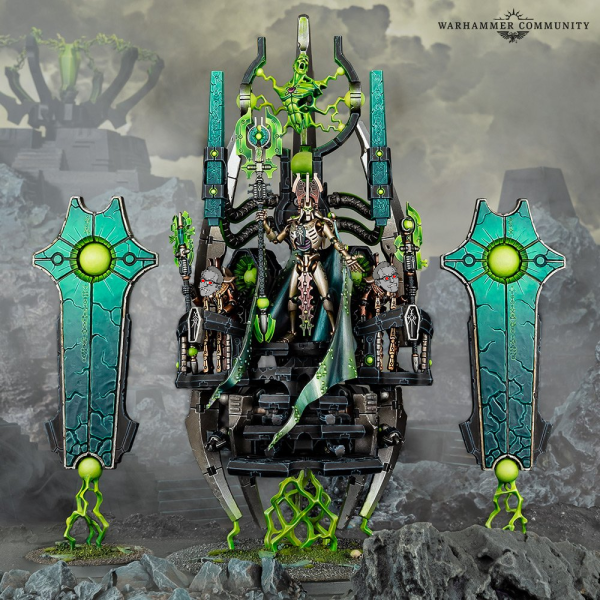 If only all Gregs were this Silent. Credit: Games Workshop (Gregness supplied)

Greg: Dad’s home, after a sixty-million-year trip to buy cigarettes, and he is not pleased.

Condit: Is that what the C’tan up there is for? Is he smoking it? I have a newfound respect for this guy.

Greg: Necrons, master of weird messed-up bones, able to weld any number of arms and legs to things, or replace any limb you want with a big knife, and what does their immortal god-king, the first and most powerful of their race, look like? He’s a regular Necron Warrior, only twelve feet tall. That’s such a flex.

Condit: I like that the first thing he did after waking up was hunt down two Phaerons and fucking weld them to his barge, presumably so that his enemies will have something to compare him against for scale. If you’re going to play this game to intimidate someone, it’s important to spell out exactly how much larger-than-life you are, sort of like how you never realize how big a traffic light actually is until you see some tiny maintenance guy up there in a bucket working on it.

Greg: Yeah, or a wind turbine, those suckers are gigantic. And also probably a Necron unit, I don’t know, spindly and covered in blades is pretty much their Main Deal now.

Condit: Wind turbines do hate birds. It’s only a matter of time until they realize humans are worse.

Greg: I’m not even going to attempt to summarize his abilities, because I’m getting to the end of the article and I’m bored, plus also his datasheet is an entire dang page long, but this guy really puts the nasty in Dynasty.

Condit: He’s also got a pair of “Triarchal Menhirs,” which are basically shield drones who’ve been mainlining Jose Canseco-branded “nutritional supplements” for the last six million years. Oh, and they’ve got giant lasers. 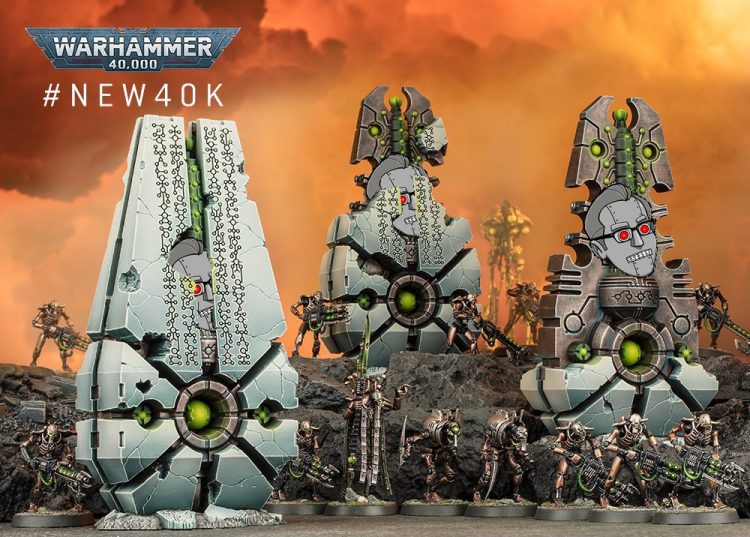 Greg: Space obelisks, which are extremely cool because they have bones. More obelisks should have skeletons. Also they have Living Metal, along with every single other multi-wound model in the entire codex, so they’re technically alive, which is even more cool.

Condit: These are basically the Necrons’ way of calling “dibs” on a planet – some Necron noble drops a bunch of them and then all the other Necrons know that they have to wait 5 millennia before they can move in after the owner gets up. They come in packs of three, and each brings a Transdimensional Abductor, which has unimpressive 12″ range and strength 4, but then backs that up with AP-3 and damage 3. They also serve as vectors for Command Protocols and add 2 to the Leadership of CORE units within 6″, so if you were planning on losing a whole pile of Warriors in a single round, I guess do it next to one of these?

Greg: You wait 9 editions for a malicious space laser monument, and then three show up at once. Ain’t that just the way.

Look it’s not our fault, but we ran out of datasheets here. Games Workshop said they’d make more if you called them up and yelled real loud though, but you gotta make more noise than the blue team if you want to get a shot at climbing the aggro-crag.

I doubt you do, but if you want more of this, we did a companion post about Space Marines. So uh, give that read, I guess. And please, please, email our bosses at contact@goonhammer.com and tell them to fire us.