It’s been a while since our last Kill Team Meta Analysis and it felt like we were overdue to revisit some of those stats and see how things have shaken out since May. With Kill Team Dark – and a potentially new way to play – on the horizon, we should look back and see how Nachmund and Moroch have affected things, cover the major storylines, take stock of where things ended up, and look at which teams are doing well and which teams are struggling.

It’s also worth noting that Games Workshop released a new set of FAQs today for the game – we’ll be covering those in an FAQ hot take shortly.

Let’s start by looking at the win rates for each faction for events in July and August to date. Kill Team events are a bit of a different beast from 40k/AoS events, in that they can typically run more rounds and also will often have fewer players, so here I’ve broken out “big events” as events with 16+ players and 4+ rounds. Because large events are comparatively rare, I’ve also included RTTs/3-round events and smaller events (minimum 8 players) in the sample to help get a better idea of how some factions look. 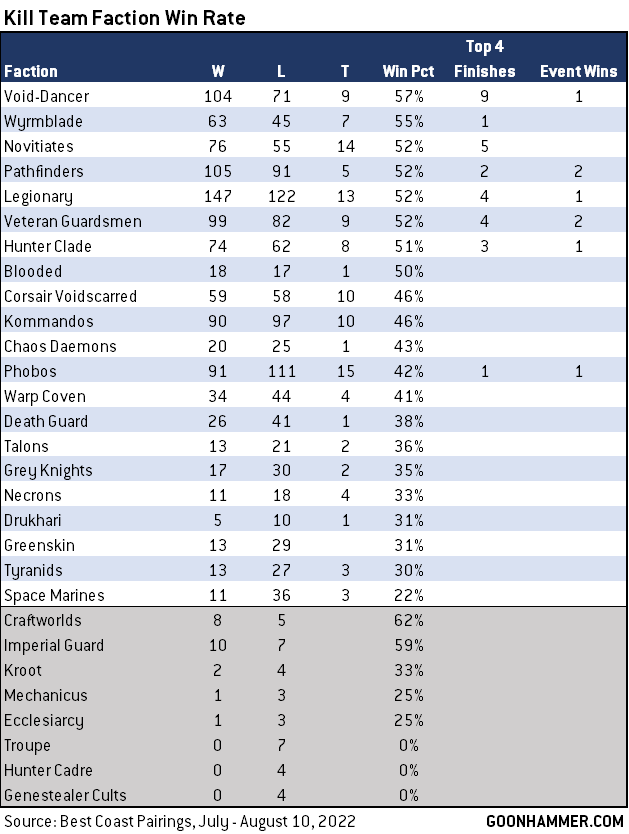 Some of this is surprising, other aspects less so. The gray section at the bottom there denotes teams that just didn’t have a large enough sample to include in the list above, as well as some factions that have been largely replaced. The one potential outlier there is Imperial Guard, where some Tempestus Scions teams loaded up with plasma guns have been surprisingly competitive at some smaller events.

The Field is Pretty Balanced

Void-Dancer Troupes are the clear stand-out here, but they’ve only got a 57% win rate and it’s likely that it’d only take some slight tweaks to bring them more in line with the rest of the field (the challenge is less that their win rate is high and more that they’re insanely consistent and dominating podium finishes). Even so the bulk of the field is doing well, and the lowest non-Compendium team of the bunch current are Warp Coven kill teams, which at 41% win rates aren’t too far off from being competitive. If we had to put these into tiers, they’d likely fall out like this:

Tier 3: Middle of the Pack

Of these, I’d suggest Warp Coven teams need a little help and Void-Dancer Troupes need a bit of paring back but ultimately that’s a wide gulf there and the Tier 4 group all share the trait of being Compendium teams awaiting an update. In short, it’s a good time to get a set of FAQ updates.

Phobos Teams Are Better Than Expected

We weren’t particularly high on Phobos teams when we reviewed Kill Team Moroch – in particular we weren’t high on Reivers and felt they could use more ranged support (from say, Eliminators, which were strangely absent). And that was originally borne out in tournament results, as Phobos teams got off to a very rocky start. However in recent weeks they’ve put up much more respectable showings, winning the Torneo Nacional Valencia in July and putting up decent results at other events in July and August. What Phobos teams lack in heavy shooting they make up in volume, throwing out a ton of shot with Bolter Discipline.

Novitates Continue to be a Top Team

We mentioned that Novitates were on fire (haha) back in May and since then they’ve continued to put up stellar results. They can struggle against Void-Dancers and Wyrmblade teams, but against Harlequins they can double up on flamers and add a duelist. They’re still a team to beat and among the game’s best options, particularly after a nerf to Pathfinder teams. Novitiates are currently sitting at a 52% win rate and a plethora of top 4 finishes, but haven’t been able to close in the last month, in part because of their struggles against some other teams with better shooting.

We’d already seen last time that Legionary teams were making waves, and in the time since they’ve become the game’s most popular team, yet still managing to put up a 52% win rate and an event win in that time frame. They’re basically the benchmark for versatile, elite teams that can shoot and fight well, with weapon options that let them specialize in either category as the opponent calls for it. This also gives them a comparatively higher skill ceiling and floor than some other teams, and helps explain why their results are frequently all over the place.

Hunter Clades Have Some Play

Hunter Clades initially flew under the radar after their release and with good reason – they were terrible. As a result, they made out like bandits in the June 2022 balance dataslate, and the results have been dramatic. With Doctrina Imperatives now selectable each Turning Point, with no debuffs turn 1 and an extra operative (and gunners) to work with, there’s a lot to like about the team suddenly. And top Kill Team Player Fernando Marco noticed, taking them to a 5-0 finish at the La IV Cabra Norteña GT in late July. If you haven’t heard of Marco, he’s worth paying attention to – think of him as the Siegler of Kill Team, and a dominant force on the Spanish scene. Speaking of which…

Spain Continues to Lead the Way on Kill Team

While we’ve seen more events pop up in the US over the summer – and it’s about time – Spain continues to lead the charge when it comes to competitive Kill Team, frequently posting events with 40+ players, while US events can struggle to hit 20. That’s good news for the Spanish scene, who seem to be living their best lives, and not so great news for the game overall, where we’d like to see more adoption stateside for a game that is much easier to play 3-5 rounds of than 40k. As it currently stands, the vast majority of top players in the ITC standings for Kill Team are players from the Spanish scene.

That wraps up our look at the stats. We’ll be back tomorrow with a tournament report from GenCon, and then the next time we look at the meta will likely be after the release of Kill Team Dark. I’m personally excited as hell about that one. In the meantime, if you have any questions or feedback, drop us a note in the comments below or email us at contact@goonhammer.com.