It’s been 2 years since Games Workshop released Warhammer Underworlds: Shadespire to widespread acclaim. Shadespire – a competitive miniatures skirmish game – quickly sold out as players dove headfirst into the Mirrored City looking for glory and shadeglass. Shadespire released with two warbands, though the full roster of fighters grew over the course of a year to include Orruks, Skeletons, and Skaven among other things. A year after launch the Nightvault opened; a new set of 8 warbands joined the fight. Now in its third season, Warhammer Underworlds leaves the spectral, cursed city it has called home. Beastgrave is Underworlds’ new starter set and it brings the fight to a ravenous mountain in Ghur. It is also cursed. 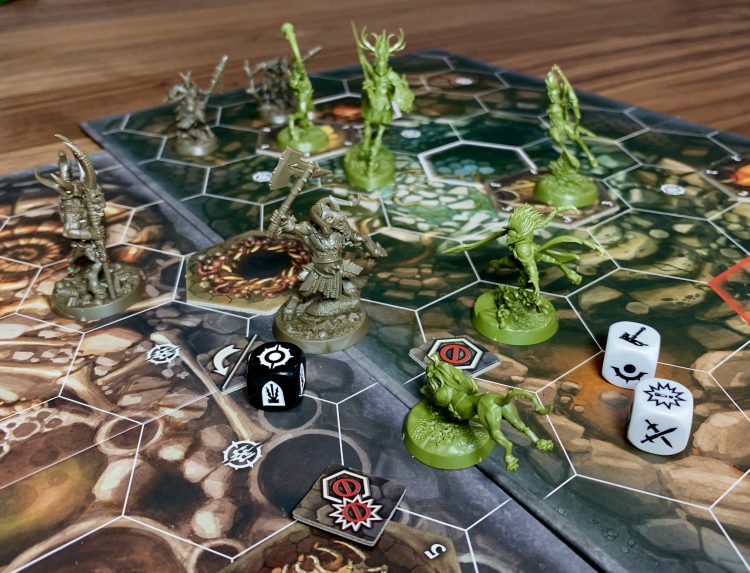 Relative to Games Workshop’s other properties, the narrative of Underworlds has been light. The city of Shadespire was cursed by Nagash when the ruling nobles – known as the Katophranes – began to use shadeglass to deprive him of souls. Using dark necromantic magic, Nagash banished the city to a void between the realms of Ulgu and Hysh. Any adventurer foolish enough to enter the city became trapped, doomed to fight and be reborn forever in the city that won’t let you leave and won’t let you die; it’s a sort of Age of Sigmar Hotel California, if you will. In the wake of the Necroquake (another whole Nagash thing), void-cracks have appeared in Shadespire allowing the fighters to emerge in the bowels of the great mountain Beastgrave.

This mountain is the setting for the 3rd season of Underworlds, and the core elements are the same. Underworlds combines tactical miniature movement with the sort of deck construction you see in Magic: the Gathering or Netrunner. Warbands (2-4) square off across a hex-grid board with the goal of scoring the most Glory Points. Your Power Deck is full of Spells, Ploys, and Upgrades. These powerful effects offer boosts to your opponents and instant effects that can dramatically change the situation on the board. Glory comes from killing your opponents, but also from a 12 card deck of Objectives. These work a lot like in-game achievements; one card may reward you for claiming an objective hex while another might reward you for preventing your opponent from entering your area. Score the most glory and you win, regardless of whether or not you actually survive. The magic of Shadespire ensures you’ll rise to fight again.

The stars of any Underworlds product are the stunning push-fit miniatures that come in the box, and Beastgrave is no different. Season 3’s opening warbands are Gashrak’s Despoilers and Skaeth’s Wild Hunt. The Despoilers are a grisly band of Chaos Beastmen who skulk quietly and attack violently in equal measure. Skaeth’s Wild Hunt is made up of Kurnoth Hunters, a faction that is new to Age of Sigmar with this release. While the two factions have a variety of different cards and abilities, they share some similarities that makes this the easiest Underworlds starter set to wrap your head around. Both warbands are fast moving squads with low defense values, and both feature low-damage ranged fighters to compliment a couple of bruisers. 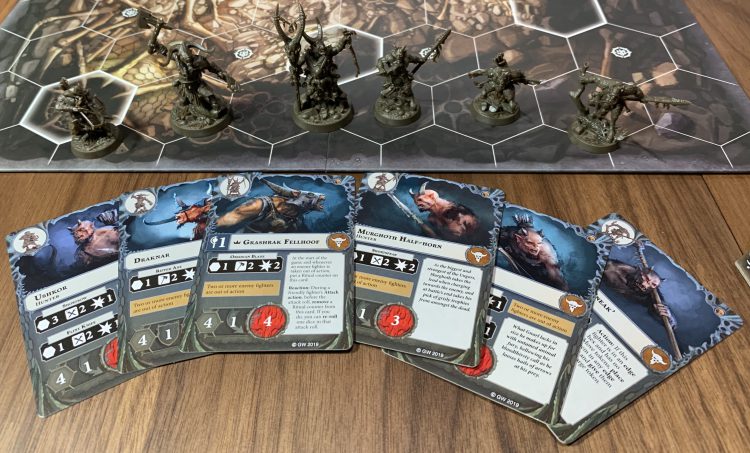 When using the pre-built decks that come in the box, Gashrak’s Despoilers are an Objective Focused deck that wants to sneak about the board claiming territory before charging in to annihilate their enemies. Second-in-command Draknar features a punishing attack that can wipe out almost any fighter in the game with a single hit, especially when paired with all the new lethal hexes that will dot your game boards. Korsh ‘the Sneak’ has a… sneaky… ability that allows him to re-enter the board from any edge hex, setting up surprise attacks or objective grabs. Meanwhile, the lithe warriors of the Hunt will dart in and out of combat using hit-and-run tactics to harass enemies. A key ability unique to this warband is Karthaen’s Hunting Horn; it takes an action to sound but offers the next attack by any friendly fighter re-rolls that may make the difference between victory and defeat. The lion-like malkyn Lighaen begins the battle as a harassing nuisance but can be upgraded into an absolute monster of a fighter capable of crossing an entire board to bring down foes. 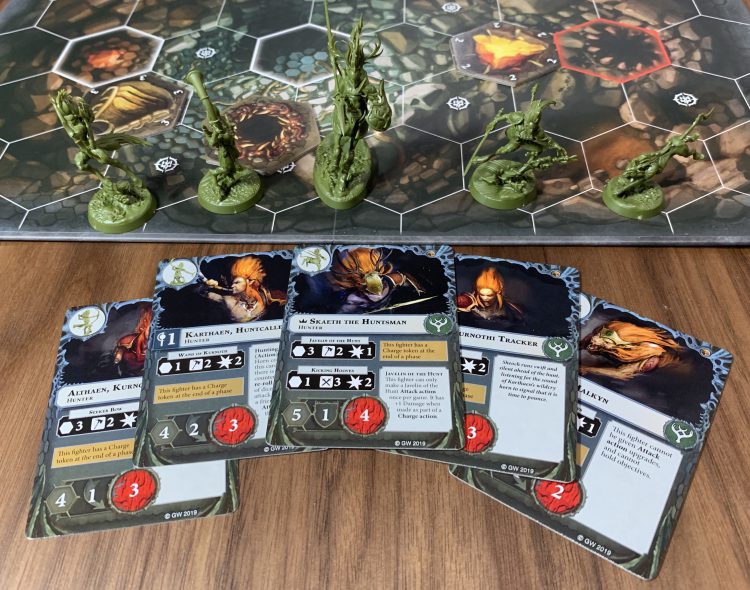 It’s important to note that Beastgrave is more than just a starter set. It is also the continuation of an ongoing product line and as such is the harbinger of number of changes. Some are minor: the misty blue-green boards and tiles we’ve become accustomed to have been replaced by autumnal orange-brown shades more appropriate for the Realm of Beasts, and Objective Tokens are now “Feature Tokens” and have the potential to be converted into Lethal Hexes. More importantly are some changes to the rules themselves. Guard – an action that boosts a fighter’s defense – now prevents you from being driven back, making Objective Claiming more viable. Players now have the ability to add a Lethal Hex anywhere on the board at the start of the game. These hexes deal 1 damage to any fighter who moves into one and their early proliferation opens the door to some quick turn 1 kills. Plop one of these gaping maws behind a 2-health fighter and suddenly your 1-damage archers become a bit scarier. 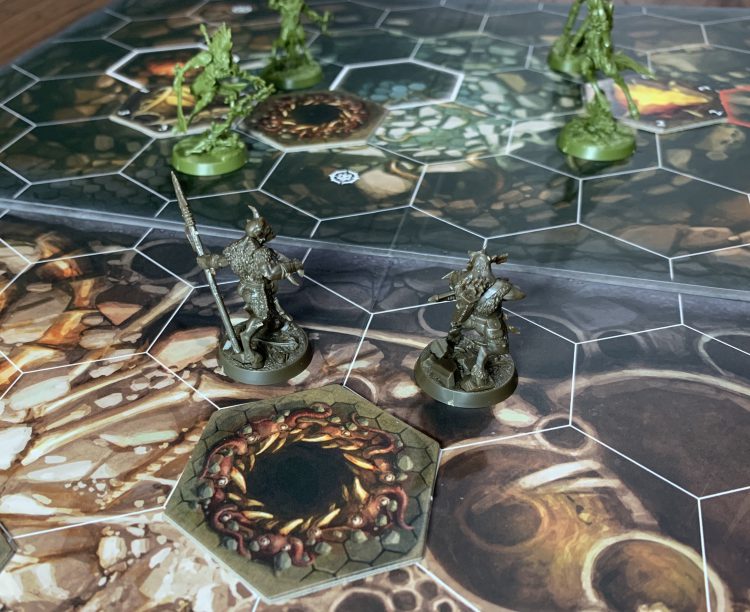 The biggest change comes in the way of Season Rotation. Warhammer Underworlds currently features over 500 Universal cards and objectives available to choose from. A large card pool can be great for variety, but it can also make it daunting for new players and beleaguered game designers trying to balance a new season entering play. Games Workshop recently announced the decision to rotate out all Season 1 Universal Cards. Season 1 Warbands and Faction Cards are still legal, it’s just the Universals that are moving on. In addition to reducing the new-player investment, this will also heavily shake up the competitive scene as many crowd favorites disappear like so many adventurers who enter Beastgrave. A Legacy game mode known as Relic will still exist for those with large collections, but the standard Organized Play is going to shift to new cards and new strategies.

Warhammer Underworlds has consistently hit my table since the day it launched, and I don’t expect that to change. In fact, the changes brought by Season 3 make it a fantastic time for new players to join the battle. If you haven’t given Warhammer Underworlds a chance, Beastgrave is both the friendliest new player set yet and a great launching point for new players. If you’re experience, I think you’re going to love the clarifications and rules tweaks brought to the game. While the additional lethal hexes may not feel as dramatically different as magic did in Nightvault, it’s already changing the early game in my recent matches. Warhammer Underworlds: Beastgrave is up for pre-order today and releases in stores on September 28.