The Narrative Forge: Making Your Own Missions

The Warhammer 40,000 universe is a massive place, and the “Narrative Forge” hobby articles encourage thinking outside the box (literally) when putting models together and stretching yourself out in the hobby. They aim to make hobbyists and players comfortable growing beyond imitating the models they see in their Codexes and playing the rulebook missions, and serve as a source of inspiration for anyone wanting to forge new experiences in the hobby. This week, Robert “TheChirurgeon” Jones is continuing his multi-part series on creating and running campaigns. This week, he’s talking about how to make your own missions for Warhammer 40,000.

Making Your Own Missions

Welcome back to our series on campaigns. We’ve previously spent the last two articles of the Narrative Forge talking about how to plan and run Linear Narrative and Tree Narrative Campaigns, but this week we’re taking a bit of a detour to talk about a fun and sometimes necessary part of campaign design: Making Your Own Missions. Creating good missions in 40k can be difficult, and so today we’ll dive into some of the tools and options available to players, discuss what makes a good mission, and build some custom missions for the Aventide Campaign we plotted out last time.

Before we start talking about building the missions, let’s start with some basic principles for building a good mission.

OK, now that we’ve got a good understanding of the fundamentals, let’s jump into how to build your own missions. 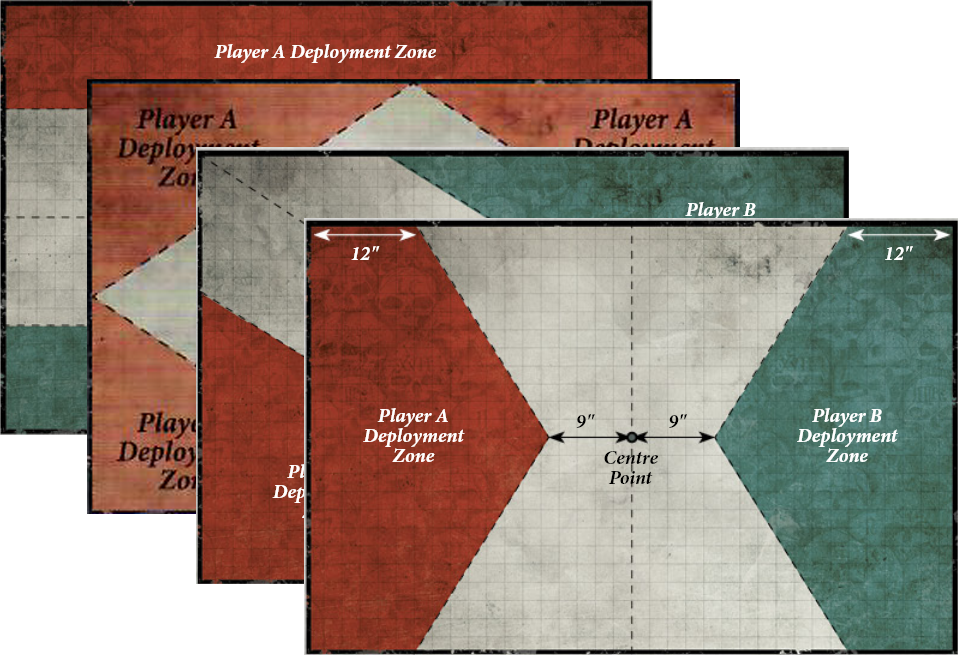 When you sit down to design your own mission, make sure you’re covering all of the important bases. Let’s run through the checklist of things that every mission needs.

You have to define who will be playing in your mission. What are the sides or forces that will be engaging? For some missions, this can be as simple as “Two players with Battleforged armies.” Generally, you should try to let players build the armies they want to play, but if your mission calls for flyers or siege forces and fortifications, you should make a note of that.

You have to define where and how armies will deploy. The Warhammer 40,000 rulebook lays out 6 basic deployment maps, which are pretty solid for the most part. There’s an expanded set you can find in the Open War deck, and if you want to make your own, that’s fine too. Note that generally, players need more space for larger armies, and most missions have armies starting 24″ apart, or at a minimum, 18″. The 24″ starting range is a pretty solid one, and what 40k’s units are balanced around.

You also need to make sure you’ve covered how deployment will be determined and executed, and who will get first turn.

Your mission needs a way to determine a winner. While you can do a simple “do this or lose” for the objective, those tend to work best when used sparingly (in missions like the Relic), as they can make it too easy to close the game out well before the final turn. Most missions use Victory Points to determine the winner, and award points for achieving objectives, both primary and secondary. Typically the player who scores the most Victory Points is the winner, but if you want to have an alternate win condition, be sure to make it clear to players.

Every mission needs objectives, things for the players to accomplish. Objectives fall into two categories:

Your mission needs a length. The average – and a good number for most games – is 6 battle rounds. If you go longer, prepare for those final turns to be very sparse, if they happen at all–the longer a game goes, the more likely a player is to be tabled (completely wiped out). Your mission should never be shorter than 5 turns, lest players feel like they didn’t get a fair chance to actually position and use their armies. Random Battle Length has players start rolling for additional turns at the end of the fifth battle round.

Finally, every good mission needs a Twist. Something to make things interesting for the players, something that will force them to think differently and strategize in order to win. Most of the time you’re creating the twist for a mission, you’ll be trying to model or represent something going on in a campaign or battlezone. Other times you might be trying to represent a situation like players losing contact with command. Either way, your twist should be big enough that players have to take it into consideration when they play, but not so massive that it dominates the game, and the twist shouldn’t be so complicated that players can’t immediately understand what it is and how it will affect them. The twist should be simple, giving players 1-2 additional rules to work with for a mission. 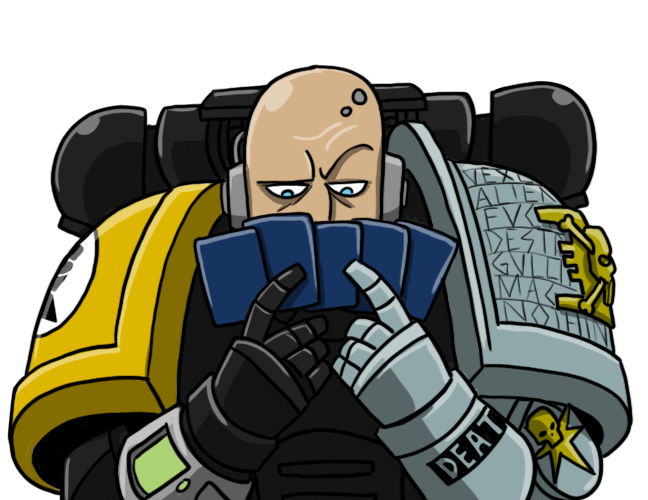 In my last article I introduced the Aventide Tree Campaign and talked about creating custom missions for some of the scenarios. Let’s revisit one of those.

One of the major branching points early on in the Aventide campaign map is The Mines mission, which leads into battles over either the planet’s massive mining machinery or a hangar full of extraction craft. Let’s revisit the brief:

2. THE MINES:Massive geothermal mining extractors, still fully-automated, run as the world itself burns. Both factions must rush to secure the extractors and ensure the last and richest of their spoils are diverted to them.
Mission Concept: A series of objective markers with “on/off” switches — whoever holds them last determines who’s getting the resource benefit (read: Campaign Victory points). Battlezone: geothermal mines, includes lots of geysers/explosive gas. Winner of round 1 gets +1 to their Reserves rolls.

OK, let’s design a mission around this.

BATTLEZONE: GEOTHERMAL MINE
The mines of Aventide are filled with massive machines designed to extra the planet’s resources. But the planet’s governors got too greedy and mined too quickly, and now the tunnels are filled with unstable passages and toxic, highly-explosive gasses that make the area a nightmare to traverse.

Ok we’ve set the mood here, let’s make some rules. We need at least one and at most three — remember, we need to keep it simple. Let’s focus on the explosive gasses, the unstable passages, and drilling machinery.

Explosive Gasses: This is an easy one. We’ll make flamers and grenades extra dangerous – for everyone. How about a rule that makes them do extra shots and AP, but if you max out or miss, it blows up in your face. Let’s go with: “Explosive Gasses: Add 1 to the AP of Grenade and Flame Weapons. When rolling for a number of shots with a Grenade or Flame weapon, roll an additional D6. If you roll the maximum number of shots with a flame weapon or roll a 1 to hit when attacking with a grenade, the firing model suffers a mortal wound.

Unstable Passages: We need a rule to represent cave-ins, basically. An effect that’s commonly used for hazards like this is to have players roll for effects that cause mortal wounds every turn. So let’s go with “Unstable Passages: At the start of each player’s turn, that player picks a point on the battlefield and rolls a D6 for every unit within 3″ of that spot, adding 1 if the unit is a VEHICLE and/or has more than 10 wounds, and subtracting 1 if the unit is a CHARACTER or INFANTRY unit. On a 5+, that unit suffers a mortal wound.

Hopefully you’ve been armed with everything you need to start creating your own missions. But if you’re still looking for some help, we have two custom resources for made by Goohammer’s own Programmer Emeritus, Greg “ANAmal.net” Chiasson. These are still in development, and will get a full release with their own articles soon but for now we’ve slapped them together in a format that’s suitable for public consumption. Probably.

The first of these two tools is the 8th Edition Mission Selector. As of this writing, there are currently more than 108 Distinct Missions in 8th edition spread across a dozen books, and while each one provides a handy table for rolling to select your mission, actually rolling to select from a broader pool than 6 at a time is hard to make work.

Enter the Goonahmmer Mission Selector. Just put in the options for the type of game you’d like to play – Open/Narrative/Matched and the objective type – and it’ll spit out a random mission for you and your opponent to play, along with the location of that mission bookwise.

On the other hand if you want something a little more experimental, a little more avant garde, we have the mission generator, which uses random attributes from those 108 missions and the Open War deck to create a custom mission for you, albeit with a few options to tweak and customize the type of game you want to play. At the moment, most of the missions it generates are intended for Matched play, but we make look at broadening that in the future.

NOTE: The generator is currently in BETA mode. Some things may not work. We’ll be updating it and fixing any remaining bugs in December, and cleaning up the output a bit more but for now, enjoy some early access.

That wraps up our look at building your own missions. At this point you should have what you need from a principles and materials standpoint to start making your own missions but if you have any questions, comments, or concerns, drop us a note in the Comments below or shoot us an email at contact@goonhammer.com. Otherwise, I’ll be back next week looking at mass campaigns, or those campaigns designed to handle large groups of players with disparate goals.