The Revenge of Adepticon, Part 2 – The Warhammer 40K Friendly

TheArmorofContempt is on the warpath, headed for Adepticon after two consecutive years of cancellation. If you missed part 1 of his series, you can find it here.

One of the best aspects of Adepticon is that there is basically an event for everyone regardless of playstyle, and over the years there have been consistent attempts to capture a casual atmosphere in a large tournament setting. This has taken on many forms, large narrative events that are arbitrated and controlled from start to finish; “gentlemens’” tournaments where force organization is more restricted and lists are reviewed for “fairness”, and even events where the army lists are predetermined.

One of the most popular of these events has been the 40K Friendly, a goofy tournament where the points don’t matter, and the rules are made up! Well, not exactly, but it does have a series of gimmicks that make it the primary choice for someone looking to slam hams, and not worry about bringing the most cut throat and efficient list possible.

The first thing one notices about the 40K Friendly is that each year there is a rotating theme to the event. These are usually geek culture centric, presumably off whatever the organizers enjoy, from The Blues Brothers to DC Comics. Not only do these usually frame the missions for the rounds, but also result in random and silly special events that can happen throughout the day. For example, during The Blues Brothers tournament a Chicago PD cruiser would show up on the table and “arrest” certain units.

In 2020 the theme was set to be Spaceballs, which has carried over to 2022, the organizers likely had the specifics planned back then, so one can assume there will be all sorts of goofy rules changes based off this classic Star Wars Parody. I personally can’t wait to enter ludicrous speed.

Another key to the casual nature of this event is that players are randomly organized into teams. Due to the size of the event this usually means the players split up into roughly even teams numbering up to a dozen each. This prevents any form of teaming up between friends, or any sort of organized effort to stack a team. A person who wins all 3 of their rounds still might find themselves on the lowest scoring team, while someone who gets crushed all 3 games might be amongst the winners. At the end every player on the team with the most battle points (which once again are based entirely off the event’s own custom, and often silly, missions) will win a coveted Adepticon medal. Additionally, the organizers will wander the event scoring players on their sportsmanship, and painting talents.

While there is no strict composition scoring bringing a competitive list is generally frowned upon, but given Ultramarine’s current placement in the meta that isn’t really much of a concern. That being said I wanted to bring a list that was clearly meant to be for fun, and would also showcase my painting ability. With that in mind, I decided to run a single battalion led by Marneus Calgar, his Victrix Honor Guard, with the rest of the army composed entirely of chunky Gravis boys. 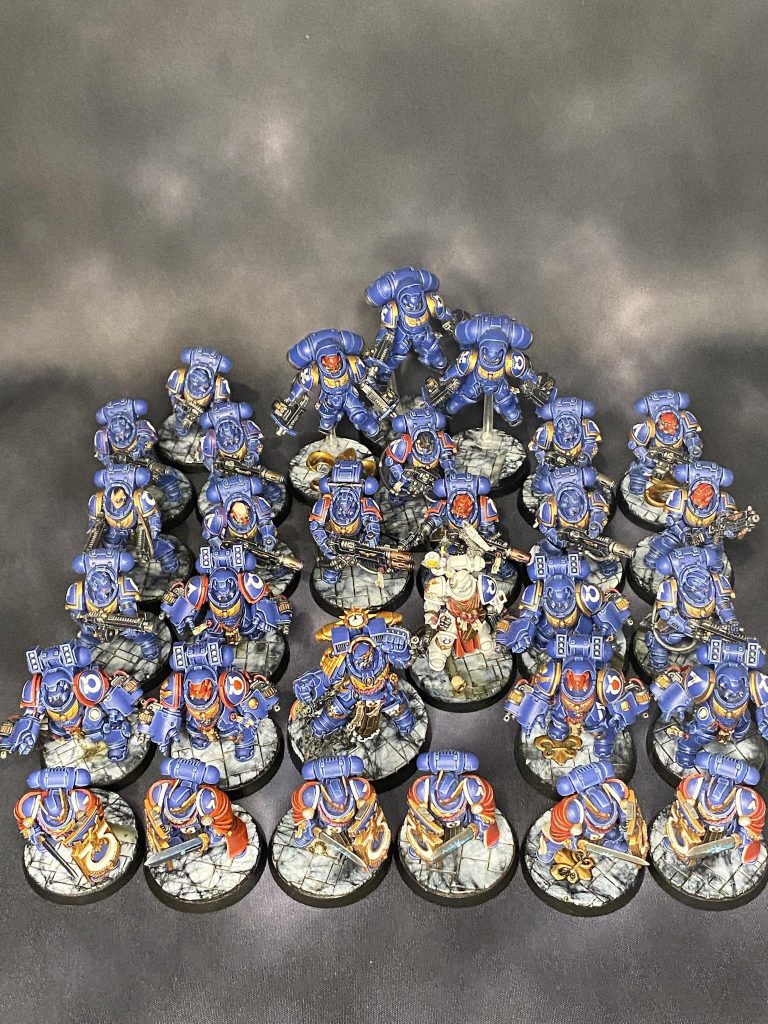 Of all the new Primaris Marines, the Gravis Marines have been my favorite by a significant margin, despite Gravis armor being a total pain in the ass to paint. While I am incapable of completely divorcing myself from the desire to win, this is the closest I will get over the entire convention to being casual in my playstyle, and to further this I plan on being fully blitzed by the end of the event. In addition, I will be representing THE BEST (you fucking heard me) Space Marine chapter by carrying their banner from table to table, while dressed tastefully in my Ultramarines bathrobe, so that my opponent knows they have already lost the battle that counts most at the Friendly, the metaphysical contest of souls between honorable combatants. 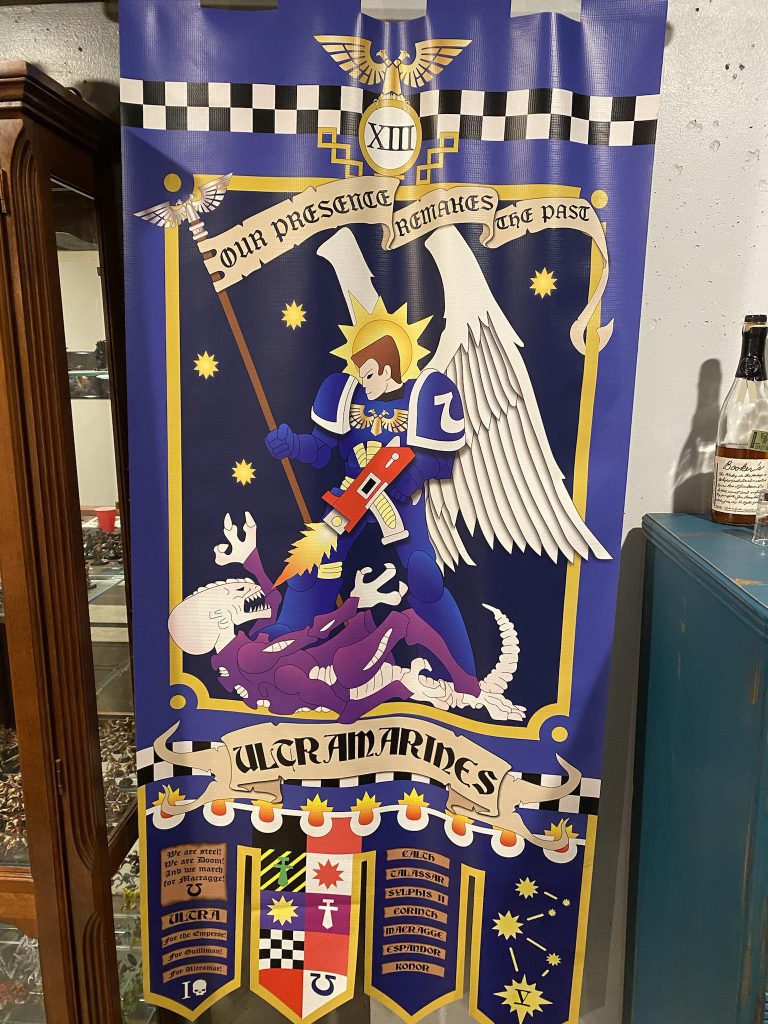 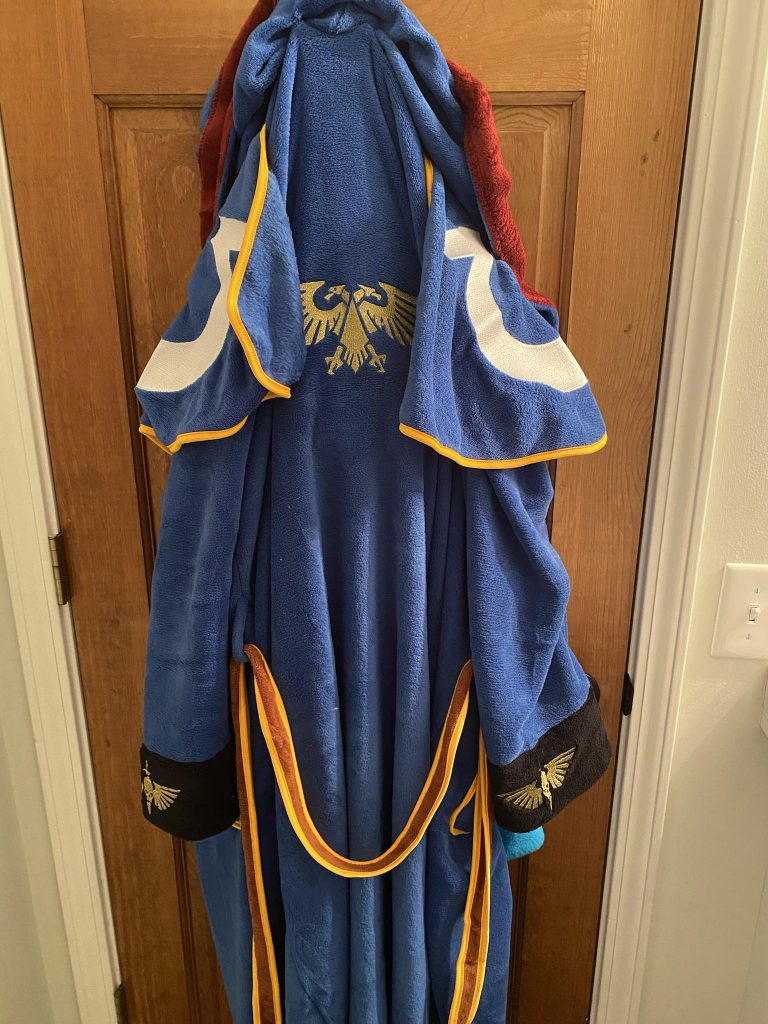 Anyway, that is all I have for this session, tune in for the next article if you’re curious about my plans for Necromunda and Kill Team where I turn to Genestealer Cults to bring me victory.