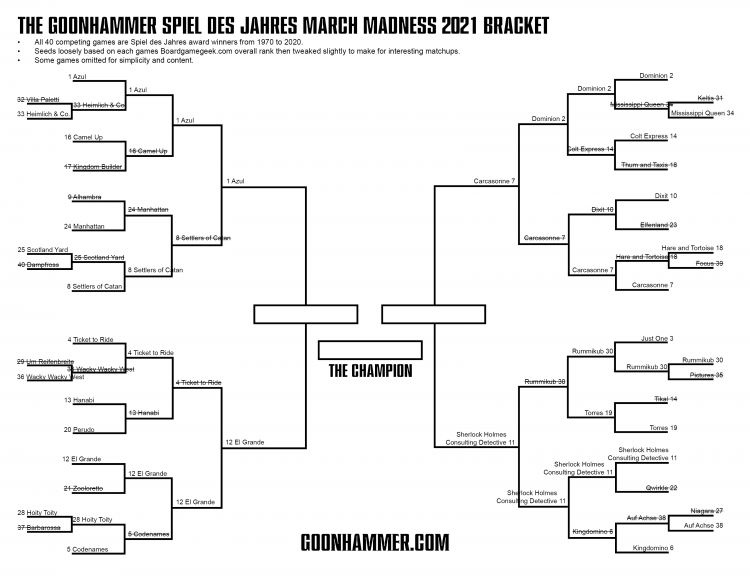 Final Four Weekend. Attending a Final Four is on a lot of college basketball fan’s bucket list. Thousands of hoops-crazed people descend on a city for a long weekend of pageantry and the highest stakes games of the year. It’s a weekend of exultation and heartbreak. 4 teams enter, only one leaves a winner. I’ve watched Duke win a National Championship twice from the stands of Lucas Oil Stadium in Indianapolis and both times are lasting memories.

Our Spiel des Jahres coverage will similarly end with just a single winner. Over the last couple of weeks we’ve delved the history of 40 award winning games. Every single Spiel winning game has left a mark on the industry. They represent the earliest “must own” games. While today winning the award means thousands of copies filling the shelves of your local big-box tile, the earliest winners measured success by a boost in folks importing titles and sharing translated rules on arcane forums.

It’s true that even making the NCAA Tournament means you’re a winner; it’s true for this activity as well. We chose winners because that’s how brackets work, but every game is worth playing—assuming you can find it. Without any further ado, let’s get to the Final Four.

This matchup is a clash of conflicts. New vs old. Light vs heavy. Gateway vs…not gateway I guess. Azul entered this tournament as our overall #1 seed and had no problems getting to the Final Four. El Grande on the other hand came in as the overall 12th seed; impressive for sure, but it took a couple of large upsets to get to the big stage.

We have done an in-depth review of Azul on Goonhammer before. We praised its simplicity and ability to bring new folks to the gaming table, and very much appreciate the visual impact that comes from the high quality components. Azul is a pretty game, and playing pretty games can be more fun; not only are you engaging in mechanisms and playing a game but you are making something fun to look at. This underrated element in gaming can ease the sting of loss or even give you something to work towards when victory is seemingly out of reach.

On the other hand, El Grande is known as one of the grandparents of Area Control, a classic mechanism that is one of my personal favorites. It holds up well today with or without the numerous expansions that have been developed. While the castle provides a fun board presence, El Grande does not rely on splashy miniatures or aggressive combat systems. It is clean and calculating. The kind of game that will furrow your brow until the last piece is played and leave you hungry to chase victory the next time you play.

El Grande’s upset fueled run ends in the Final Four, unfortunately. This was a close match. El Grande jumped to an early lead out of the gate before Azul dug it’s tiled hands into the ground and clawed back to tie it at the half. The game remained close through the first 17 TV timeouts before the venerable area control classic simply ran out of gas.

How did Azul win? Well, it’s that accessibility. Azul is readily available; I can literally get it at my grocery store. El Grande is going to require a little work while you track down boutique online retailers, ebay, or brush some dust off the back corner of a local game shop. Azul also has more accessible play. Easier to teach, easier to play, and easier to get into despite a fairly abstract scoring system means that this gorgeous box will see play and see play often. Those reps give it an edge over El Grande.

Our hope is that this series introduces you to games you may not have played, and Azul is so easy to recommend that it’s going to edge out El Grande. Grey haired grognards may decry the modern three-point dominated game and aggressive dribble-drive offenses, but there is no denying that these flashy modern games work and work well.

Over on the right-hand side of the bracket we have two venerable classics duking it out. No flashy upstarts or no modern party games over here; these are two old titles that continue to be relevant due to ageless mechanisms and a long shadow of influence.

Carcassonne has always been on the short list of excellent gateway games for great reasons. Firstly, it’s pretty simple to execute a play: draw a tile and play a tile lining up the features so the landscape continues to grow. Yes, scoring farms can be tricky and an opponent can come out of nowhere on one of your cities but for the most part this is a steady title that will slowly ramp up tension over the course of the game. It plays particularly well among folks with similar levels of familiarity, and offers a game that you can grow into and will grow with your group.

Sherlock Holmes, however, is almost everything Carcassonne is not. It isn’t familiar at all; the “board” is a thick booklet, a map, and a series of newspapers. Playing involves one or more people reading aloud with the table hanging on every word hoping to tease out hints and avoid red herrings. Clues are scattered; an innocuous personal ad or below-the-fold story in the newspaper may have the key the puzzle. White-boards are oft recommended accessories to keep track of information and stories. What all that provides, however, is something that still feels unique decades later.

This match-up was not quite as close as the above, which is also a pretty regular occurrence in the real Final Four (sorry UCLA fans!).

Consulting Detective can be frustrating in less excusable ways. Typos have plagued certain editions making it harder or nearly impossible to solve. The level of nuance and detail required to solve some of the cases can also be frustrating in a poor way; tiny details a player skims over accidentally can make them feel terrible when they end up being pivotal to the solution. I’ve seen players refuse to take a turn at reading as they don’t want the pressure of missing something. Even if you read it all, the logical leaps required to solve a case may be possible for the world’s greatest detective but much harder for regular old folks like you and me.

As we’ve stated before, both games are truly excellent and worth playing. I also think it’s worth noting that Consulting Detective’s mechanical influence on the industry is stronger than Carcassonne’s. However, Carcassonne is a much easier recommendation and definitely a game you’ll be in the mood to play more often. It also invented the Meeple; how’s that for legacy? 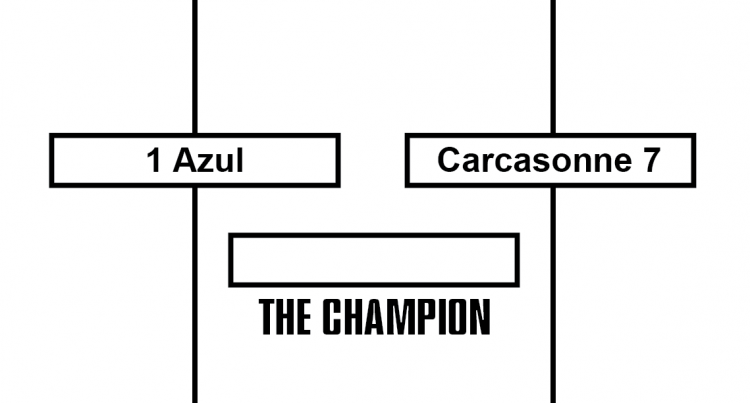 40 games. 39 matchups. It all comes down to this. In our championship matchup we have Azul vs Carcassonne. Both are known for being excellent gateway games. Both are known for seamlessly switching between light casual affairs to bloodthirsty tableflippers depending on the mood at the table. Both can also fall victim to dreaded analysis paralysis while a player tries to map out every possible play with all of the public information.

It goes without saying that both of these titles are worth a spot in anyone’s collection. While no game can lay claim to a 100% hit rate, the entire Turn Order writing team is pretty confident in saying that either of these titles will hit the table over and over should you decide to pick one up. But which one wins? Modern classic Azul by designer Michael Kiesling, whose name adorns 3 separate Spiel des Jahres winners? Or 20+ year old veteran Carcassonne by Klaus-Jürgen Wrede, whose title has spawned over 10 expansions and is still relevant today?

It’s Carcassonne. Goonhammer’s Best Game to win the Spiel Des Jahres is this idyllic yet bloodthirsty tile laying title. It’s an eternal classic for a reason, and this win likely does not come as a surprise to anyone.

I want to give a huge thank you to everyone who has followed along with these articles. We’ve loved seeing the comments here and on social media. Also a huge thank you to Tiffany Leigh to creating the bracket in the first place. This effort brought in almost the entire Turn Order team plus a number of guest contributors and was a lot of fun. Choosing the winners of each matchup sparked a lot of debate, in particular this last article. While my heart will always beat for dark horse candidate Rummikub, it’s hard to say these 4 titles didn’t deserve their spot in the Final Four!