If you’re just joining me on the road and are interested in the journey up until now, please click the following for parts one, two, or three. A couple of friends have also published on their own journeys  – please see the excellent test game between One Wing and Corrode and the LVO preparations by our newest contributor, Shane Watts!

Today I’ll focus on the hobby aspect of my progress and close with the first run of the new, revised LVO list. I’ve also decided that one of my list options which dropped the Vibro Cannons for a second Shining Spears squad is simply not viable due to modelling/painting time constraints and have therefore removed it from the consideration set.

Previously on Boon’s Road to LVO:

Progress as of Christmas Eve

As it turns out, when you have no work for the better part of two weeks and the only responsibilities are to get up, make coffee, and then eventually hang out with family and friends, you can get a lot of painting done. Underpinning all of this is my girlfriend’s amazing tolerance for my stupid hobby and the time I’ve spent on it (thanks babe!). As I’d like to focus this installment on the hobby aspect of this road, I’ve included a bit of a breakdown below on how I step through my process with these models and how I measure my paint progress with a completely made up percentage time estimate:

In total I’ll use 14 different GW paint pots on these, which is a little bit under the average for my models. Some examples of the various stages are shown below – they’re not pretty: 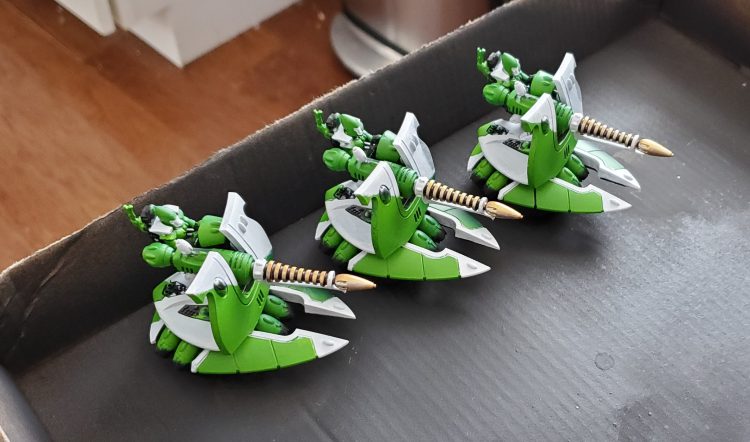 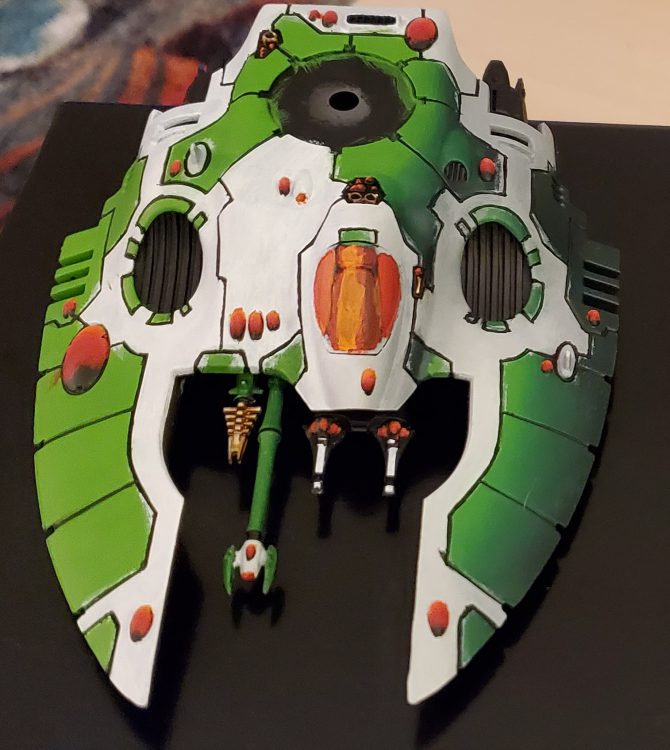 So over the last three weeks I’ve made the following progress – I’ve stopped at freehanding things as I’ll save that for the end and just do it all at once. The 97%’ers are otherwise “table ready” and the satin varnish will protect their paint jobs at the event if I’m unable to finish.

I’m slightly behind on a couple of items, but I’ve also gotten ahead on some of the future items so I think I’m right on schedule and I’m feeling confident. But enough talk – let’s see some pics! 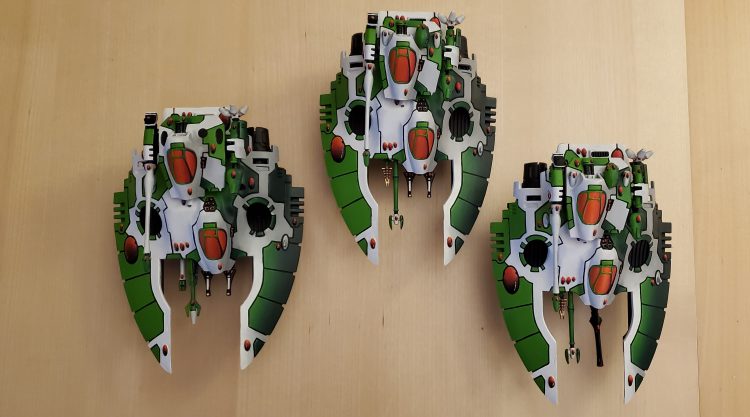 Falcons from Another View 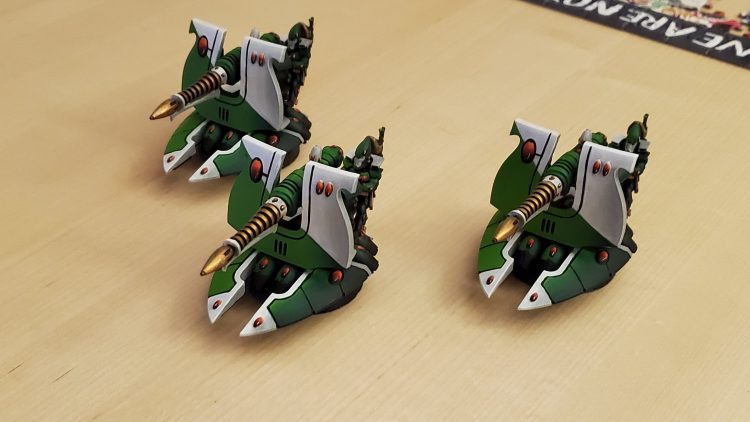 As I theorized in my last installment, I ran out the new and improved Original List Version 2.0 for my next league match against fellow Aeldari player Aaron Scherer and his Aeldari Flyers and Warlock Conclave list. The first time I ran into Aeldari flyers was against Aaron and he stomped me so hard my ancestors felt it. I’ll be curious to see how it plays in a post-CA/PA world. The lists we used are below: 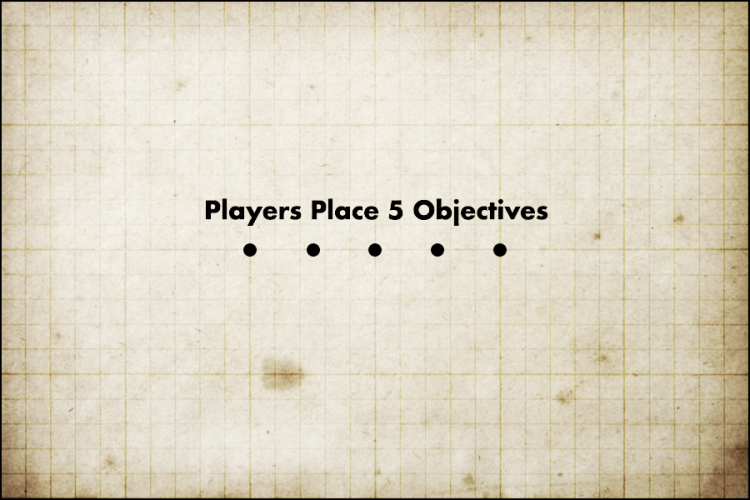 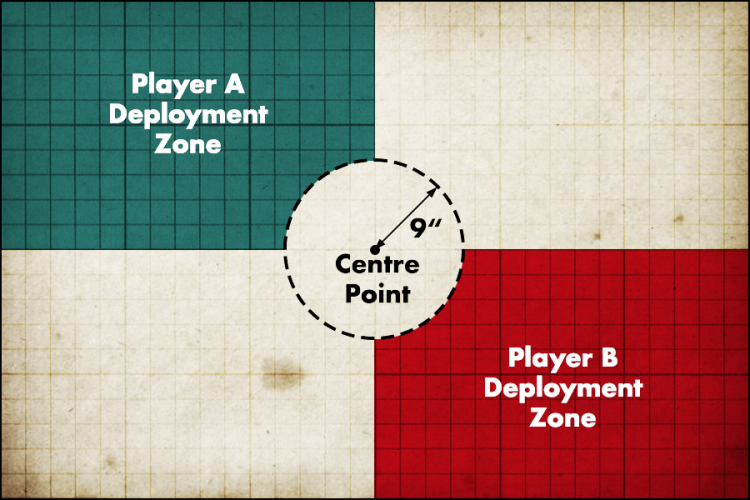 As it was ITC mission 4, the winner of the deployment roll is in actuality the true loser. I won that roll, picked my deployment zone, and then watched Aaron deploy his entire army in the back corner behind a ruin with a single Ranger unit in reserve. Knowing that we each had a Phantasm in our pockets and with me likely going second, I deployed similarly with a couple of Falcons up front to screen a Phantasm, and Quicken’d Warlock Conclave’s threat range – keeping my more valuable units further back to counter punch as needed. We each held an objective in our respective ruins, with a second objective placed in the open along the center lines within our respective deployment zones. I did not seize, and to my surprise, Aaron did not Phantasm – opting instead to play it safe with his Conclave.

So I tripped Prepared Positions and awaited the Flyers. 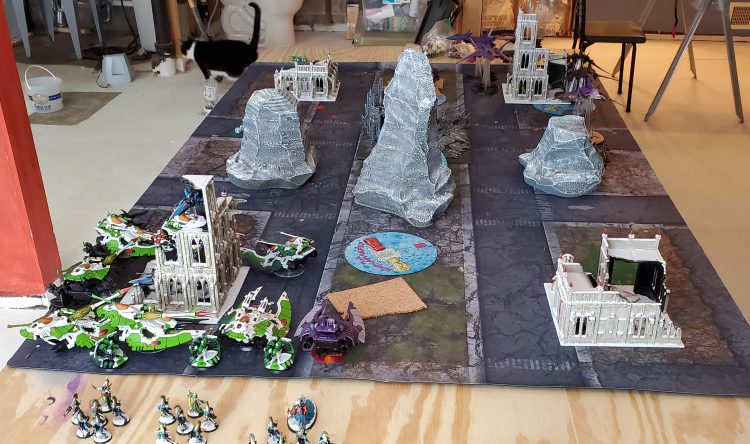 From the back corner, Aaron cast Fortune, Conceal,and Protect on his Conclave – giving them a 3++/5+++ and an additional -1 to hit (-2 outside of 12″). I’m cognizant that he also has Lightning Reflexes to make them nearly impossible for me to hit – he held them back knowing that a Quicken wouldn’t put them into effective range from his back corner. Unfortunately for Aaron, my vehicles all out range his own – so his flyers were forced to come forward and unable to maintain a distance that minimized my shots. He held back the Hemlock in order to keep it alive, but the Crimson Hunters placed themselves in front of the Conclave while the Razorwings zoomed around the board edges. He opened up against my lead Falcon with Bright Lances and against my Shining Spears with Pulse Lasers. The combination of the natural CHE abilities with Expert Crafters meant that all of his shots landed and wounded but my invulnerables on the Spears saved two while his Bright Lances rolls turned out to be abysmal – collectively doing 6 damage on 4d6. With half his firepower effectively spent, his Razorwings tried to clear my Shining Spears who now popped Lightning Reflexes (should have done this right away). The Exarch tanked all but one of the Disintegrator shots that managed to wound but the rest of the shots failed to kill him.

Killing nothing in his opening salvo put Aaron in a tough spot – and I was prepared to make him pay. I needed to move up my Night Spinners slightly to sit on the objective on the edge of my zone and range his Rangers and Guardians sitting on his backfield objectives – I likely wouldn’t kill them this turn due to the stacking modifiers, but I needed to command the board. My Shining Spears moved out to bear down on his two Razorwings along the far board edge while my lead Falcon moved forward to block the Conclave from digging deep into my line. The other two Falcons maintained positions to prevent a Quicken-ed charge on my backfield. I Fortuned, Protect-ed, then Quicken-ed my 7 remaining Shining Spears to surround the two Razorwings on the far flank – they now had an effective 2++/5+++ benefiting from the wounded Exarch’s Skilled Rider power. The shooting phase opened with a bang. I chose to ignore the Conclave and their ridiculously buffed defenses and targeted the Crimson Hunters instead – intending to reduce their effectiveness by tiering them. The Vibros and Falcons combined to bring one down and issue some damage on a couple of Razorwings, while the Linked-Fire Prisms brought down the second. I think Aaron was really missing Alaitoc on these, even with the rerolls it may have saved one of his jets. My Spears dunked one of the Razorwings with Shuriken/Lance fire then assaulted the other bringing it down as well. A brutal first turn for Aaron – no kills and lost the vast majority of his offensive output. I honestly don’t think he was expecting that kind of output from my list. 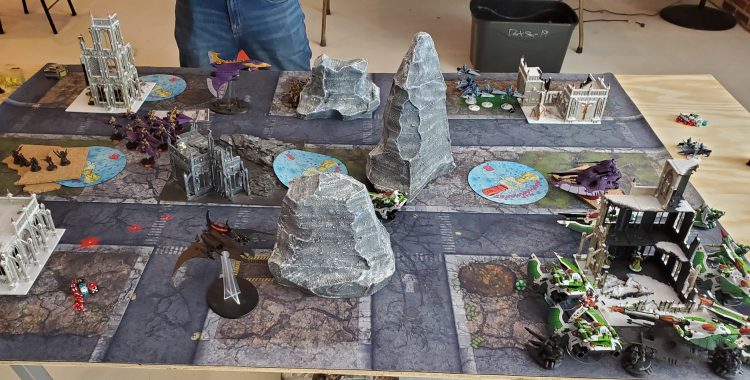 Top of Turn 2: In a good position to counter his second wave

Aaron was going to need a big turn here. He moved his Hemlock and a squad of Storm Guardians up to threaten my Spears. The Conclave moved towards the table center to claim the objective, threaten my Falcon, and hang in a position to string out towards a charge position on my Spears following a Quicken. The Skyrunner Warlock now positioned itself behind the far rock outcropping alongside his Farseer Skyrunner counterpart. His remaining Razorwing moved forward to draw sight to the Spears. The Farseer got his Fortune off on the Conclave and Doom on my Spears and then the Conclave unleashed a massive Smite doing 6 MW to my Falcon. They followed it with a Protect on themselves and a Jinx on my Spears bringing them back to Earth a bit on a 3++/5+++ for my wounded Exarch, 4++/5+++ on the rest. However, Aaron failed his Quicken with a warlord trait reroll. This likely saved my Spears. He quickly downed the Falcon with the combined Conclave shooting which promptly exploded and tiered his Razorwing. All five Dire Avenger made their emergency debark rolls meaning no Avenging Strikes were activated. The Hemlock and Storm Guardians failed to wound the Spears – Fortune having saved the few failed save rolls that punched through. The Rangers sitting back managed to plink a couple of the exposed Dire Avengers and the Razorwing added a couple of more, but otherwise no further damage was sustained. He direly needed to clear the Spears and this probably ended the game.

On my return I began to slide one of my Falcons up the near flank and moved my remaining, damaged Falcon forward to block the gap while the lone Dire Avenger scrambled to sit on the objective with the Conclave. The Spears unexpectedly surviving now had a chance to take his Conclave out of the action next turn by sliding up and assaulting the Farseer and Warlock that sat on the other side of the Storm Guardians behind the rock. I Smote the Razorwing from a debarked Yvraine and Farseer bringing it crashing down. The Night Spinners opened up, clearing the Rangers and half of the second squad of Storm Guardians hiding on his back ruin objective. The Vibros downed the Hemlock while and the Spears split their fire; Shuriken fire cleared the Storm Guardians while lances dug into the Farseer who rolled well and survived with 2W remaining. The Linked Fire Fire Prisms poured shots into the Conclave but managed to kill only a single Warlock after they Lightning Reflexed. Closing the turn, the Shining Spears charged into contact with both the Farseer and Warlock and I poured all but a few attacks into that Warlock – ensuring he wouldn’t be able to come out the other side and put a Quicken into that Conclave. The Farseer survived but the Warlock fell easily. There was no way for that Conclave to threaten my firebase without absorbing at least a full turn of shooting. It was likely game at this point, it was just a question of when the tabling would occur… (it didn’t) 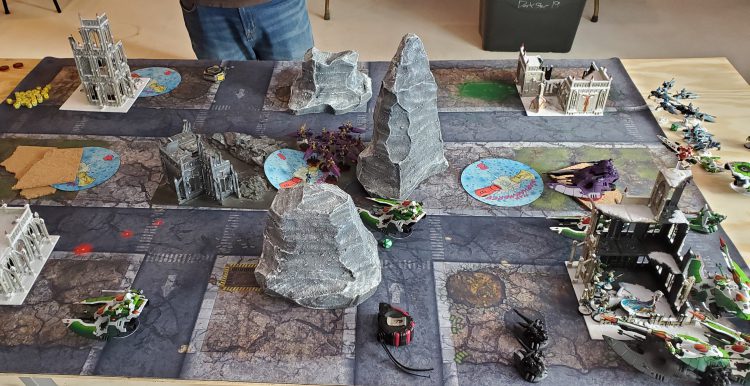 Top of Turn 3: Cleaning up from this point onward

At this point Aaron’s got one reserved Ranger unit, half a Storm Guardian squad, and nearly untouched Conclave holding the center. His Farseer retreats to behind the Conclave and the remaining Storm Guardians push to the second objective in his zone. The final Ranger squad comes in on his home objective. A Smite from the Farseer removes my final Dire Avenger and he gets Fortune, Conceal and Protect off. A second monster Smite is good for another 6 MW and claims my second Falcon which does not explode. This time he isn’t messing around and the Conclave finishes my Spears unit. They did their job.

My Falcon running along the board edge clears the remaining Storm Guardians as it moves into the objective. The Rangers are cleaned up by the Night Spinners, and everything else moves to draw LoS and dump into the Conclave. Nothing. Not one.

Nine Skyrunner Warlocks stand between me and tabling Aaron. It may surprise you to learn that with nearly my full fire-base remaining, I managed to kill only another three Warlocks.Good for two points on Gangbusters. It didn’t much matter, but it was a low scoring win at 28 points due to a lack of being able to Kill One or Kill More in the final rounds and my misplaying the Engineers.

Next Time: The Final Push

That’s all for this week! Hopefully the next update will be my final before LVO – looking to complete the army and report back on how it performs at the RTT!