The Road to LVO: Down with the Clown

When last we checked in on my progress towards the LVO, I was being thoroughly kicked in by fellow editor Corrode’s Crimson Fists. While I didn’t come out of the game feeling like my list was non-viable, it certainly did spook me a bit. The most notable concern was how against any flavour of Fists, it really doesn’t matter if my Fire Prisms start out of line-of-sight; there’s a good chance they just get blown to bits anyway if I go second, after which I have a distinct struggle to get into a game where my opponent is presenting a serious armoured threat. I had a good think about whether there was anything I could change in the list to try and mitigate this with what I had access to (my pre-event paint queue is pretty much already full) and concluded that there wasn’t really, and that hoping to dodge Fist Whirlwinds (and play on tables with good cover all weekend) was my lot. 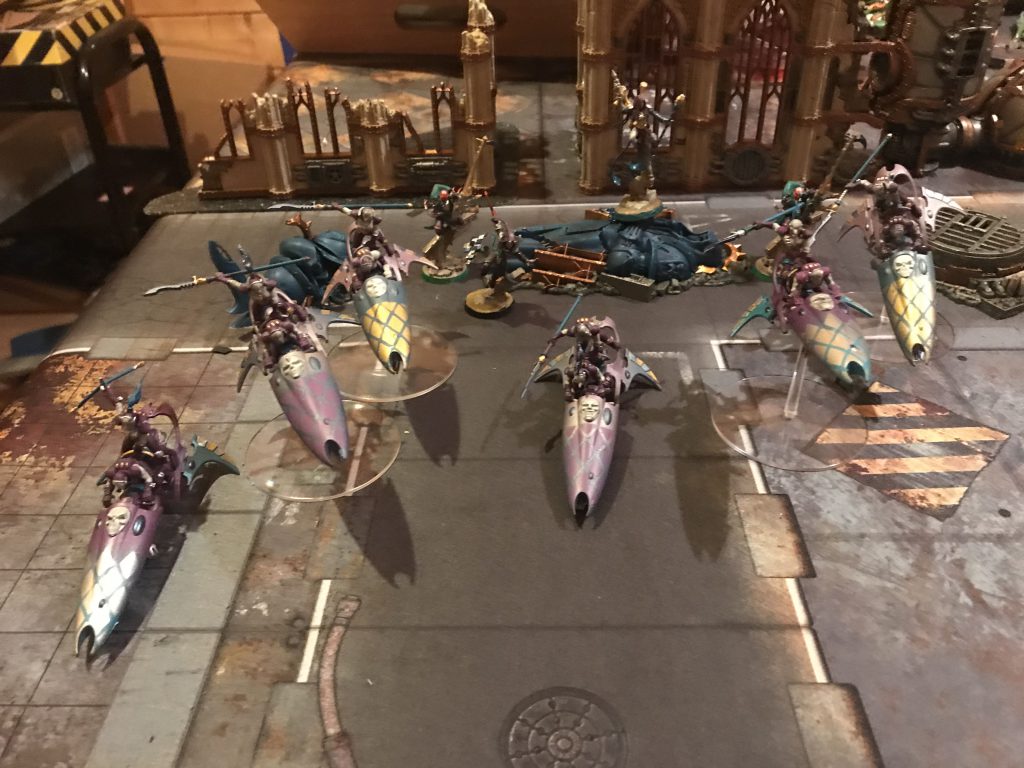 However, out of the blue a major curveball has been thrown at me – a friend was selling up a good-sized contingent of painted Harlequins, and given that they’re something I’ve wanted access to as a tool for a while, I’ve snapped them up. I played around a bit with various army list options, and after a bit of tinkering and discussion with the Goonhammer brain trust I’ve ended up with what I think will end up being my final LVO list: 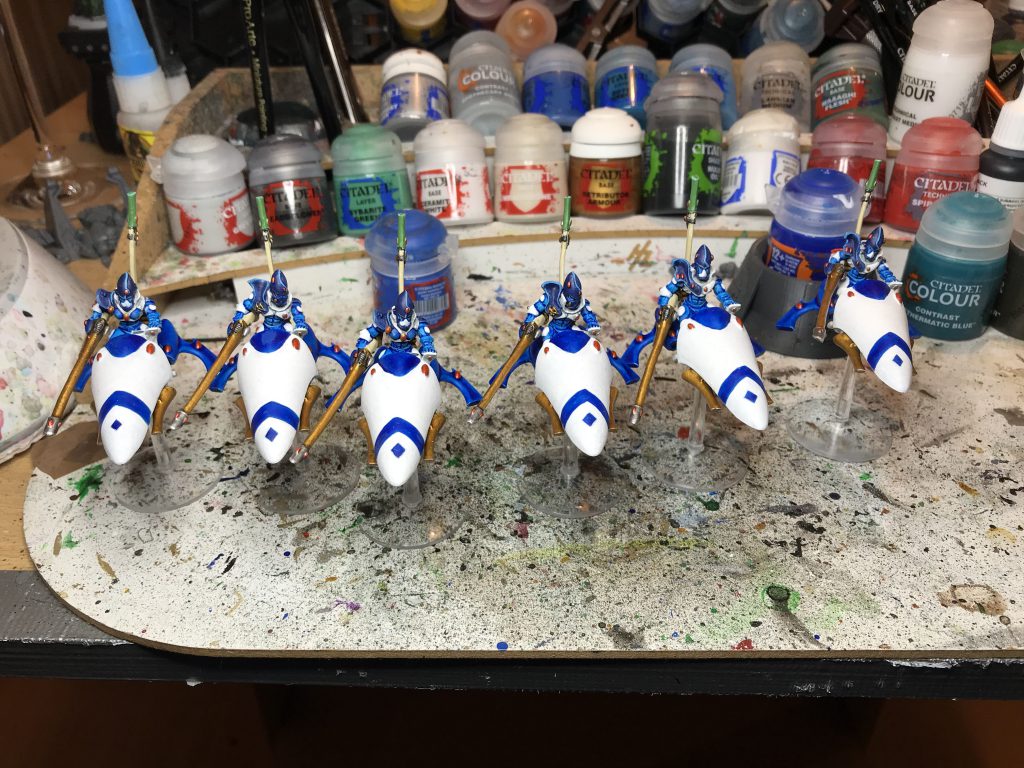 These assholes are definitely still in after all the time I’ve spent painting them (I already had three).

Skyweavers have been a consistently high-performing unit and picked up a 5ppm cut in Chapter Approved, making them extremely attractive in general, and adding them in here substantially changes the target profile of the army, I think for the better. First and most obviously, I can now stick both of my key alpha units into Deep Strike if I need to, allowing me to reserve more of my forces for a “comeback” punch against a powerful army that goes first. The Wave Serpents and herohammer stuff should reliably keep me on the board long enough for that to happen, and overall I think the gameplan of this army when it goes second is much more compelling than the original list. In terms of “on-board” targets the only thing my opponents will really have to play with are Wave Serpents, which have a healthy degree of resilience to most ranged firepower.

Against armies that don’t have ridiculous amounts of no-LOS shooting I can also just put them on the board, redeploying with the Hundred Swords of Vaul to stay out of trouble if needed. They can then immediately boost up to a 3++ and/or cause some mayhem with Fire and Fade, and provide an option for landing a turn 1 kill against any army with light-medium vehicles.

Over at the herohammer end, the rest of the “standard” Harlequin Vanguard all pull their weight. The Shadowseer can double-smite and also put some ranged mortals into a target like a Knight, while Death Jesters are good, cheap objective holders/harrassment units. I’m still not 100% sure what Masque I’m going to run as but I’m leaning towards Dreaming Shadow, meaning one can also take Curtainfall, allowing them to more meaningfully threaten support characters. The Solitaire is a potent psychological tool, and fits in well with the lists overall plan – I’ll generally throw him into the mix at the same time as bringing in the bikes, giving my opponent yet another problem to deal with and hopefully taking out a character on the way. 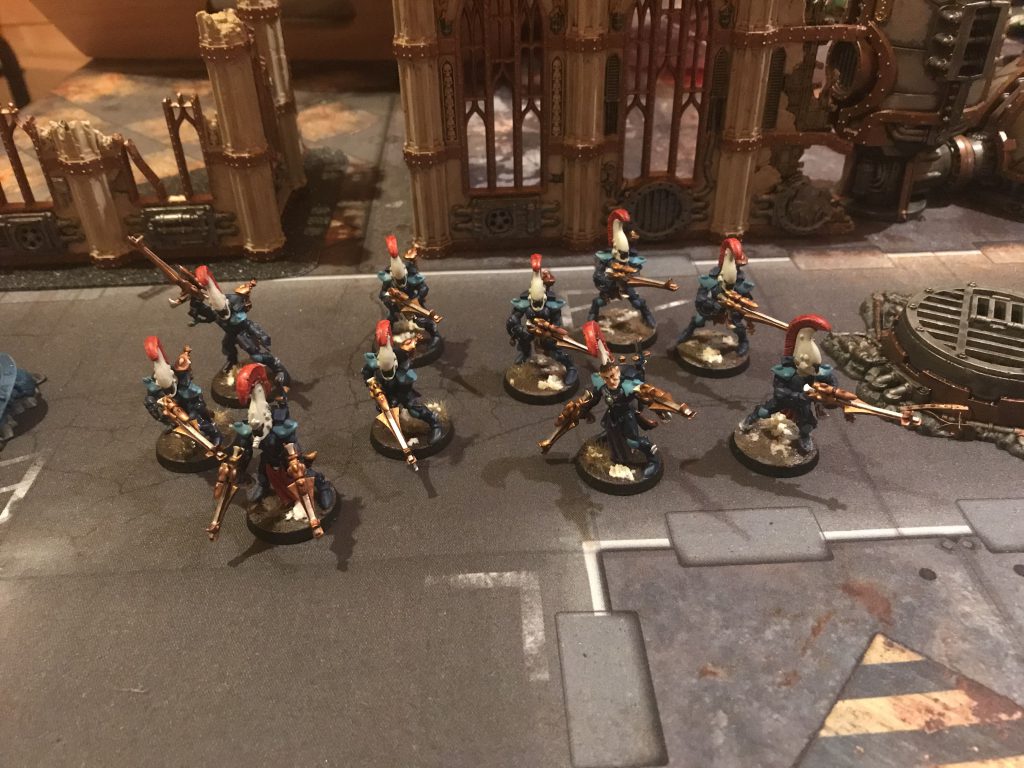 10 more of these ready to go

Over on the Craftworlds side we’ve mostly streamlined outside of removing the Prisms, but the two choices that probably stand out are the Warlock Conclave and being Biel Tan. The conclave is largely there to claw back some points for weapons on the Skyweavers, but does also make the list much less vulnerable to Headhunter. Being less easy to pick secondaries against is one of the upsides of this build, with Marked being the only “free” option and Headhunter the likely followup. The Solitaire will die in any close game, but avoiding adding two vanilla Warlocks to my list means that HH is no longer a freebie for any Marine list with Eliminators. The plan is to keep them in the Serpent until they’re needed. As for Biel-Tan, very nearly all my guns are Shuriken weapons, allowing me to skip the Autarch for more juicy Harlequin points, and Court of the Young King makes the critical Shining Spear charge even more reliable. It does also let me potentially add the Spirit Stone of Anathlan to my Protect Warlock, but my relic picks are going to be pretty constrained thanks to having the foot Farseer who needs the wing. 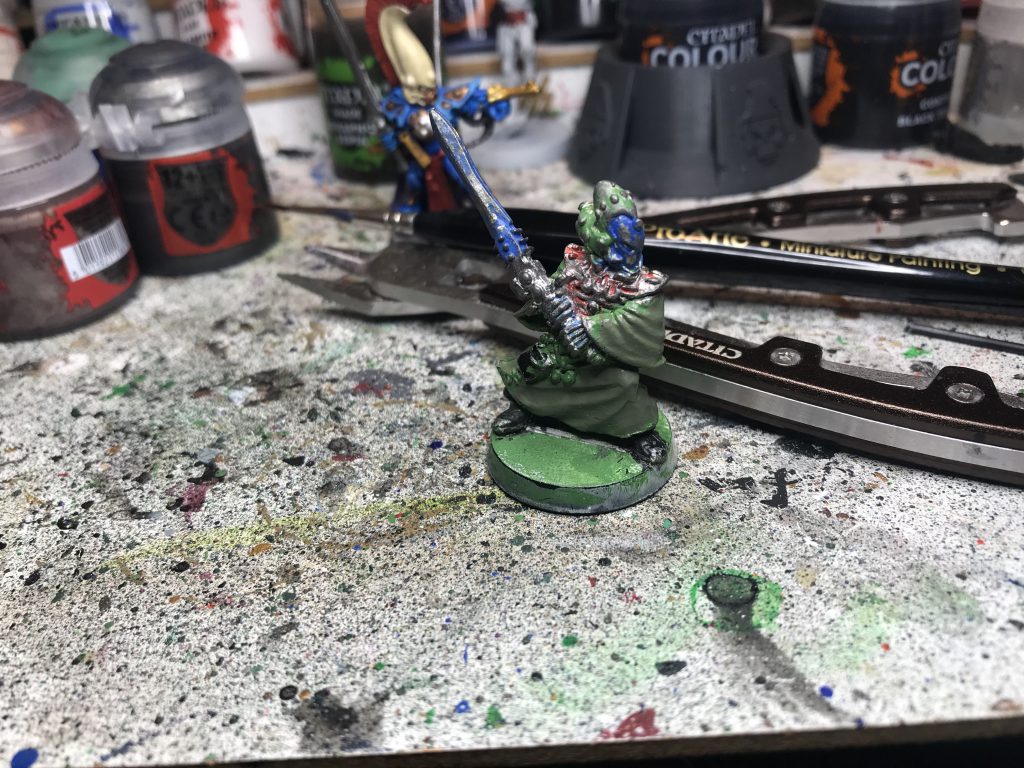 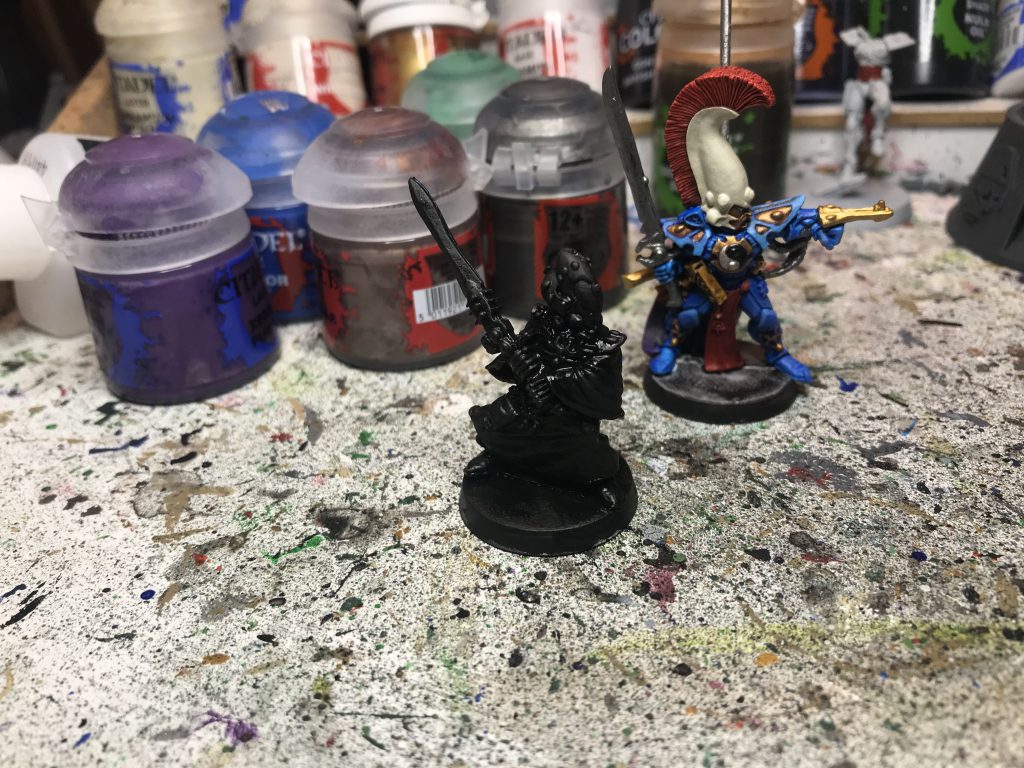 …the boy must die so that the man can play a slightly optimised list.

Do I have any concerns with the list? Lack of easy first turn kills is the main one. I think there are enough Shurikens kicking about that most of the time I’ll be able to find one, but I do have to bear in mind that I don’t get the extra 4″ of range. Still, with Phantasm I can bring my transports close enough to go on the attack unless my opponent has completely hidden their forces, and it’s not like the previous list would have managed an easy kill in that situation either. Being able to deploy the Skyweavers on the board at least a decent amount of the time helps with that too.

I’m also still undecided on a few points. I already mentioned Masque on the Harlequins (where the choices are Dreaming Shadow or Soaring Spite) but I’m also not 100% sure who to take as my warlord. I definitely want a Craftworld relic in every game, but I think there’s a possibility that I want two Harlequin relics more often than I want two Craftworld ones. This is especially true because if I do make a Craftworld unit my warlord it’s probably my Warlock – at which point he’ll likely already get the re-rolls I might use a second relic for via Seer of the Shifting Vector! I think the choices come down to:

Cegorach’s Rose or the Cloak of Hidden Knives on the Solitaire is the other place I’ll usually want to put a relic, with the Starmist Raiment occasionally going on the Shadowseer. I think the Death Jester option gets discounted – it’s cute but the other two are more “efficient” in terms of CP – the Solitaire’s relic is probably higher priority than Curtainfall most of the time, so that build locks me in to spending 2CP pre-game, whereas for the other two builds I only expect to spend one each. The face-off then comes down to whether I prefer the ability to take the Harlequin relics I want in a more cost-efficient way and add possible CP regen, or to have access to a full re-roll when casting Protect. Given that missing a Protect cast was the final nail in my coffin in the practice game, I’m currently favouring the latter, but I expect to continue going back and forth for a few more days yet. 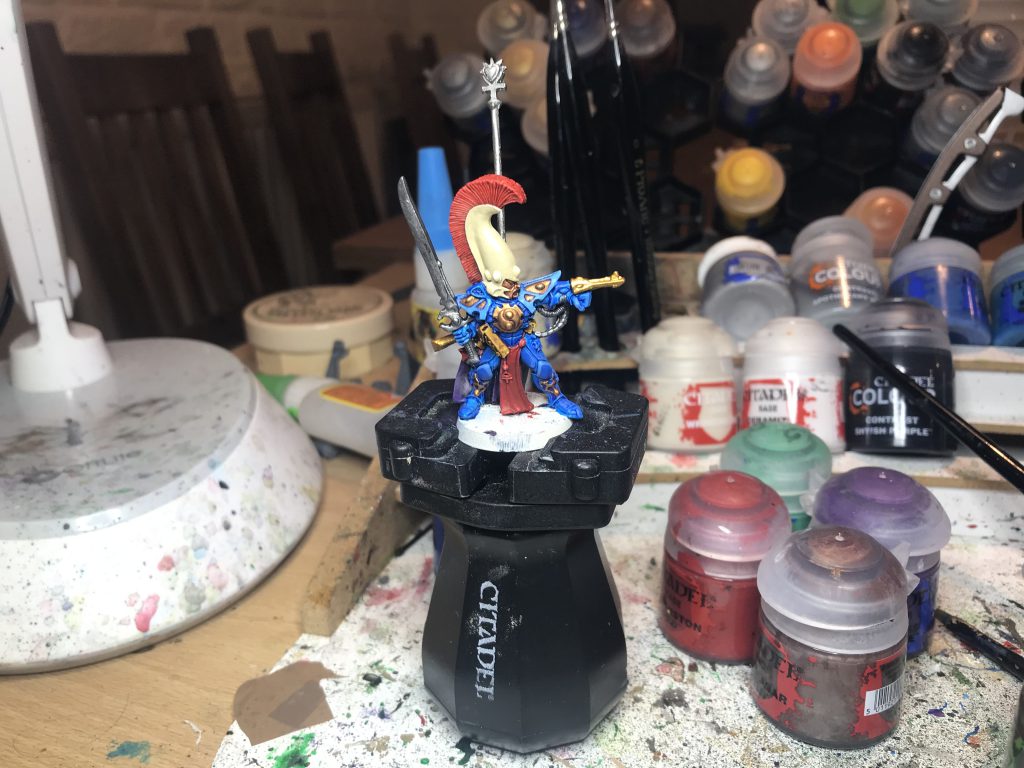 This guy I actually want to look nice.

The final, major concern with this list is that I don’t really have access to a chance to test it before the submission deadline, and indeed probably not much prior to the event at all. It wouldn’t be the first time that my first game with an army was the first round of a tournament, but it would be the first time I’d done the same with an entire codex. Ultimately though, I think I have to follow the principle of “go big or go home” here – I’m not certain if this list is great, but it “looks” more like something that might pull off a surprise in an elf-hostile metagame, and it’s probably more interesting to try something dramatic than limp to a mediocre finish. My intention is to repeatedly read SC:Harlequins and to spend the Thursday of LVO throwing nets over as many Goonhammer contributors as possible for warm-up games. 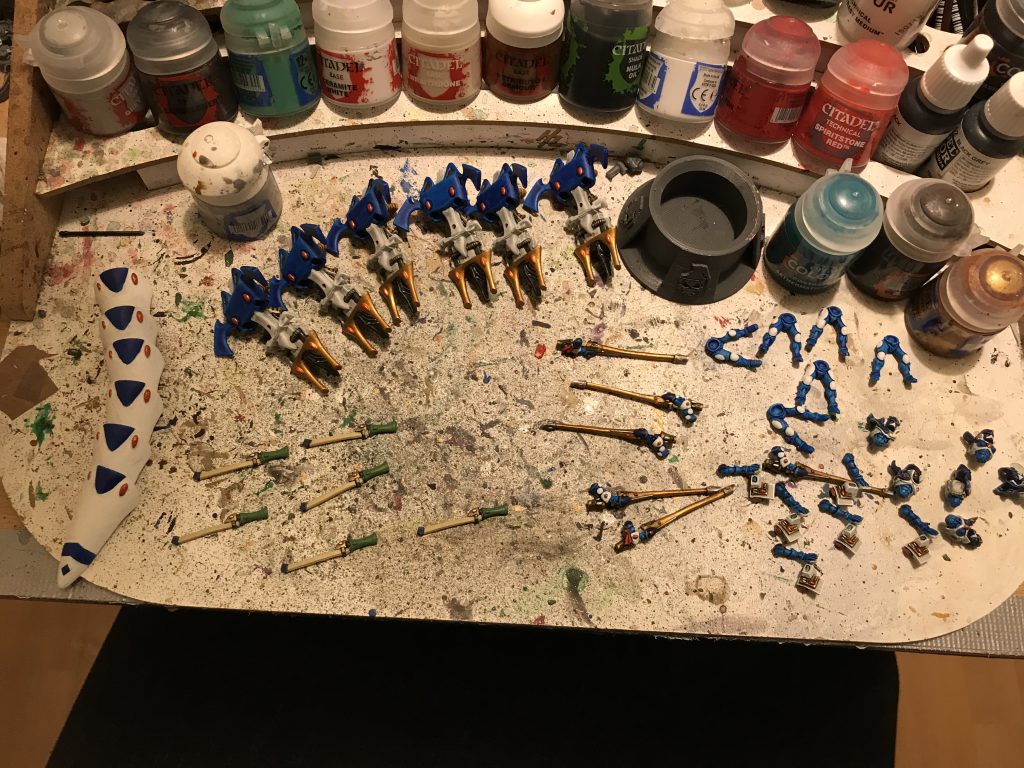 So much finecast suffering.

Hobby wise, as you might be able to tell from the pictures, I’m nearly there. Six Shining Spears was the biggest commitment and they’re done and dusted, and Asurmen is also nearly complete. The list tweaks have meant I have a warlock to paint rather than a Wing Autarch and that’ll be quicker, and the only thing left after that is a few touch ups on some of my remaining Dire Avengers, including re-basing the ones that are still on ancient goblin green bases so that things are all consistent.

Overall, everything is on-track – and I’m also super hyped about the upcoming trip. I’m flying out a few days early and my wife is coming along too, so we should get a proper Vegas experience on top of the tournament itself! It’s finally sinking in that this is really, actually happening, and I can’t wait!