The Road to LVO: We Started in the Basement. Now We’re Here

We started in the basement.

Here at Goonhammer, and in garages, basements, bars, and game stores around the world, gamers are talking about lists, travel plans, and last-minute hotel booking procrastination. We all have our paths, from salty 5+ year “old timers” who have been doing the trek to the desert for three editions, to first-time tournament goers who want to experience one of the biggest gaming events in the world. From the people whose notions of being a champion are delusional at best, to those whose dreams are stunningly plausible. We’re all thinking about bringing home some hardware, and cementing our little place in gaming history.

Today, I’m not telling my story – though this story does involve me.

Brian has been playing GW games for a long time. Certainly longer than I’ve been in the miniatures hobby. He’s a local to the town I moved to for Narawife. It’s a small town, with about 15,000 people, and certainly nothing you could call a “local scene” for 40k. But there was a Fantasy scene there in the great “Before Sigmar” Times, and Brian and his group were the core of it. But editions change, school, jobs, and babies happen, and the group eventually dissipated. Several years passed and as all wargamers do, he eventually got the itch and started to look into 40k. And boy oh boy did he find the content he needed to dive right in. Goonhammer (of course :D), the Art of War, and the 40k Stats Centre were all huge in bringing him up to speed with what’s happening on the scene.

But despite his enthusiasm, Brian didn’t have anyone to actually play with.

Obviously the ITC is a huge part of all of this – the content, the scene, the events – and through his research, he found someone who had won a few RTTs in the area and reached out to him. That someone was me. It even turned out that I not only lived in the same state as Brian, but the same town. We worked out some logistics and met up to slam some hams in my basement a few times. Brian had a lot of rust to scrape off and some turn order things to sort out, but I could immediately see that he had a good head for competitive play, and with some practice and reps he could thrive on the local scene. And wouldn’t you know, after a few months that’s exactly what happened. He started to show up to our statewide RTT circuit and he wound up coming in second at our September event. 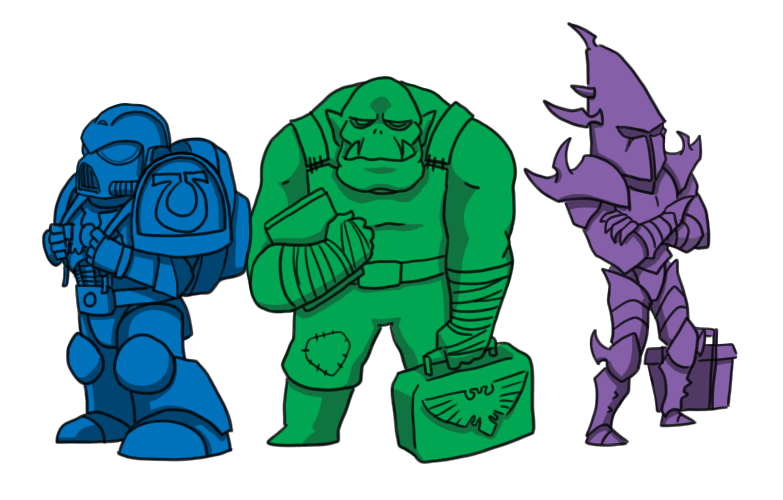 How do us Best Dakotans even get games in? We do have some cities, and they aren’t only made of ice and shame. They also have game stores! (Editor’s Note: The game stores are built out of ice and shame). I grew up in Grand Forks and we have been blessed to have two stores supporting our dumb hobby for several years. We Grand Forxians are clearly a bit unique in the state as we wound up having a lot of competitive players with the means to play and travel for games and before you know it, we had built a team: The Warhogs. 30 to 50 of us traveling the frozen wastes looking for other dojos to fight, dreaming of nothing more than taking their trophies, drinking their booze, and seeing them driven before us before wandering back into the tundra. Every tournament within “driving distance” (5 hours one way for a one day event is drive-able, right?) was up for grabs. However the other towns we’d descend upon were not prepared and we could never really get our own act together for consistent events. Over time, school, jobs, and babies happened, and quite a few of us left Hog Central.

After I moved to my new local town, I noticed another town ~90 minutes away (so, you know, a quick jaunt down the road) was hosting a non-ITC event. I was hungry for games without a local scene and determined to get games in whenever I could. If that meant doing some non-ITC stuff so be it. And maybe I could convince them to run ITC events… attendance would be huge! I know all these pigs! So I packed up my gear and headed over. On that fateful Saturday I met Sean, who has also since joined the Warhog ranks. This was not his event. He wanted to do ITC but had been told that some of the locals wouldn’t show up for an ITC event. I told them if he ran an ITC event, we could double the attendance. So the next month he ran an ITC event.

And we did double the attendance! Well not me, I was off in England meeting Corrode and Wings and drunkenly explaining to them how dumb the ETC scoring format was. But it happened! And then he ran another ITC event, this time in a different major city, and he got another good turnout. And back and forth, across the plains and tundra the Two Rivers tournament circuit was born. We built a local tournament scene. Was the terrain great? No, not on all the tables and certainly not right away. We’ve been working on it. Sean has put in some real time and money out of his own pocket to improve our terrain. Month by month, things improved. We now have L blockers, and hills, and a very NOVA-y set of boards we play on traveling 300+ miles a weekend. We’ve had attendance grow with new players coming in from further and further away.

None of this would have happened without the boots on the ground making the game they love happen. Traveling clubs, local terrain builders, and accommodating store owners. A year and half of work we we now have consistent events every month, plus a GT (The Two Rivers Open, March 7th in Fargo, North Dakota!) happening. A feat that felt impossible not all that long ago. We built a local scene. Born from a community getting together being inclusive, encouraging, and putting in the work to build something we could all enjoy.

The Pyramid that’s a Circle

So here is Brian, crashing into a well-run, growing community, filled with a coalition of gaming clubs, drawing from a tri-state area and an international pool of players. And he is IN. He’s having a blast, getting to push models around and meet some cool people. And wait, what’s this? There is a major Grand Slam event with cheap flights and people he can stay with? OF COURSE HES GOING TO VEGAS, BAAABEEE. He is taking the same trek all those people in the garages, basements, bars, and game stores around the world are taking. The same trek to the same destination that doesn’t exist without the local scenes that feed into it. I KNOW, I KNOW. I JUST SAID not 700 words ago he wouldn’t have found me if it wasn’t for the ITC rankings. However, I wouldn’t be ranked where I am without our circuit, or the many roads to Renegade or Iron Halo, or NOVA that we have taken. Having a standard packet of tournament rules – a standard shared language for players to come together and compete with – changed this game from top to bottom.

Good luck Brian, Chase, Liam, Shane, the James‘s‘s’s, the Warhogs, and and all those people in the garages, basements, bars, and game stores around the world. Let’s feed the beast because the beast feeds us because we feed the beast. And remember to make some friends along the way.