The Road to LVO: When You’re Part of the Problem

Today is Monday, 20th January 2020. Tomorrow I will be clambering onto a coach on the way to London Gatwick and so the actual, physical, road to LVO begins, instead of the metaphorical one we’ve all been on for the last couple of months.

Other authors have been talking about what their plans are in some detail over the last few weeks, planning and changing their lists, and furiously painting away to make sure their armies are table-legal for the event. I, on the other hand, had mostly settled on a list ages ago, and more or less had it painted and ready to go. The main issue was getting a couple of Whirlwind turrets and hatches finished off, finishing my auto bolter Intercessors who originally had basecoats bashed on to be battleready for the Element Games Grand Slam a couple of months ago, and then the stretch goal of painting 10 more Intercessors so that they were actually holding stalker bolt rifles instead of regular bolt rifles (which I cannot imagine anyone else would ever have noticed or cared about, but would have been a point of personal satisfaction).

In the end, I made it most of the way. Five of the stalker bolt guys are on my painting desk right now, just waiting for the worst and most hateful stage of painting an Intercessor (highlighting the armour), and then they’re ready to go. The other five will sadly not be joining me in Las Vegas as they are still in black primer and there is not enough time left to change that unless I pitch up on Wednesday and immediately try and paint them in my hotel room, which doesn’t sound like a good time.

On the plus side I did paint this Sloppity Bilepiper. Focus is the name of the game.

The list I’m taking is very nearly the one featured in our Editor Showdown Battle Report a few weeks ago:

I’m sure everyone will be thrilled to see another Space Marine army turning up, as there’s just not enough of them around these days.

The only two changes to my list compared to that game are that 1) I realised I was underpaying for relics, since the Champion of Blades stratagem gives you access to an Imperial Fists relic as a successor, but doesn’t actually give you one to take – so you have to use your free one and thus I would have to pay for the relic flag, and 2) I threw in two Company Veterans instead of one hunter-killer missile and the extraneous Infiltrator. This is mainly to reduce my exposure to Marked for Death – people still can take it against me, because they can mark Pedro, the Dreadnoughts, and the big Intercessor squad, but they can’t maximise it simultaneously with Big Game Hunter. Whether people prefer the Dreadnoughts, Pedro, and the Intercessors (tougher, but more likely to be out in the open) than one of the Dreadnoughts plus the Whirlwinds (easier to kill, but often harder to actually see) is a question for them, but the benefit for me is that “both” is no longer a reliable answer. The Veterans will make handy Engineers and potentially add a little throwaway deep strike screening, and will definitely not keep costing me games by easily giving up Kill More or being a fantastic target for people trying to score Butcher’s Bill. 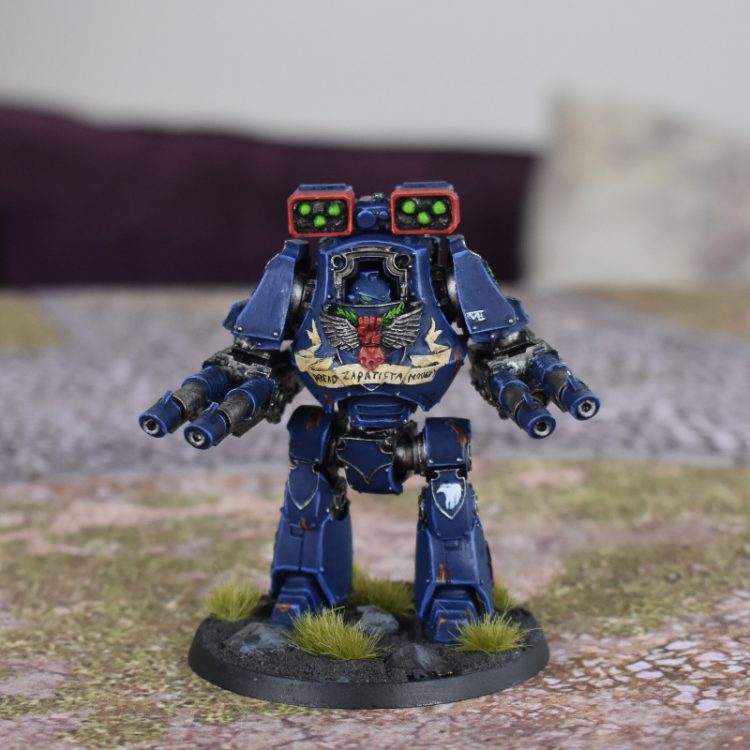 Speaking of games, I’ve played two more games since the editor showdown, one of which I won and one of which I lost horribly. The former was against Iron Hands and the latter was against Emperor’s Children with some Slaanesh Daemon allies, and if you’re thinking those things are the wrong way around then trust me, I am too.

Both of these games took place at my local store, on terrain which I set up approximately in the NOVA format (incidentally – I have Thoughts about how late the LVO terrain guidance went up compared to list submission, but we’ll save those for the post-event roundtable).

My Iron Hands opponent had a list with a bit of a grab bag of goodies from the codex – Feirros, a biker smash Captain, a big and little Librarian, a Lieutenant with the Ironstone (the galaxy’s most ubiquitous ancient relic), 2 lots of Intercessors, 5 Scouts, a Whirlwind, a Thunderfire Cannon, a Chaplain Dreadnought, a Leviathan Dreadnought, and oh yeah a fucking Astraeus. We were playing Cut to the Heart (3 objectives, capture middle and opponent’s for the bonus). We ended up in the slightly weird deployment situation that our objectives were diagonally across from each other, mine with my Whirlwind castle covering it and his with just 5 Intercessors and 5 Scouts. My Infiltrators were in the middle to grab the centre and the rest of my army was on my right flank to try and gun for his objective, and because it was where my Dreadnoughts could hide out of line of sight reliably. I was expecting him to deploy that side and cover his objective and instead he was in the opposite corner.

This turned it all into a bit of a cat and mouse game, with both my Dreadnoughts advancing on turn 1 instead of shooting so that they could a) get out from behind their LoS blocker but still b) be out of LoS of the Astraeus on his turn. This somewhat lowered the killing potential of the early turns. I also got a little lucky that I immediately killed his Whirlwind and it exploded in the middle of his army, and he didn’t re-roll it – I assumed this was strategy but it turned out he forgot that was possible.

In the event, we ended up in the slightly stupid situation that I killed most of the rest of his army, but didn’t kill his Astraeus, handily winning on points but still feeling quite beaten up. I don’t think there’s an especially good answer to that. The stacking buffs on the Astraeus from being Iron Hands make it very difficult to kill, while also upping its damage output considerably. I think in the event I did about 36 wounds to it before Ironstone, Feirros, and FNP interference, and it finished the game with 10 remaining. If I want it dead I have to try and deck it turn 1 with all of my shooting, or not try and kill it at all until there’s no other targets left and hope to just play the mission as happened this time. 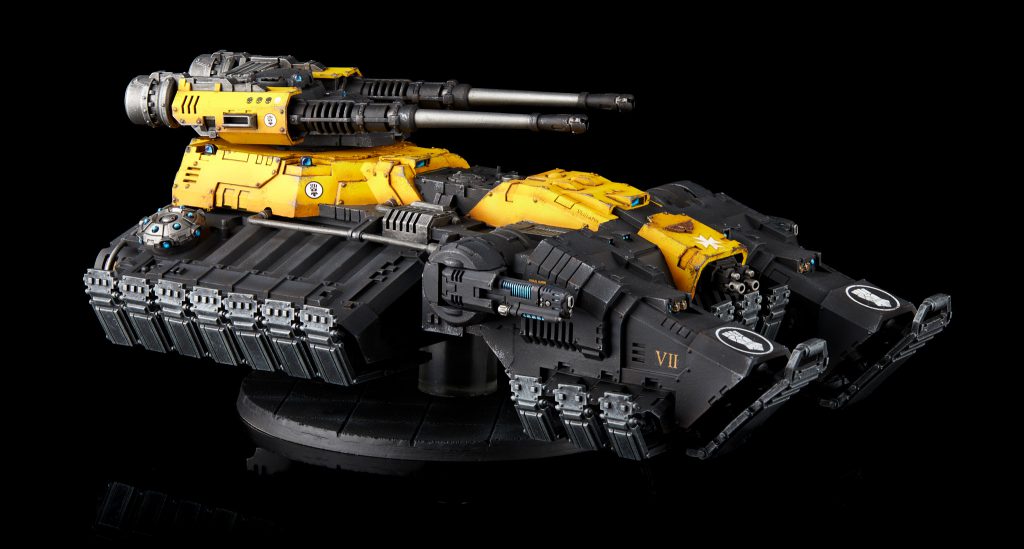 Imagine this, but painted in Crimson Fists colours and pretending to be Iron Hands, and across the table from me. Credit: Jack Hunter

The other game against Chaos was kind of a comedy of errors on my part. We rolled up Frontline Assault (pointy Dawn of War) which is my worst deployment and I chose to deploy in the most boneheaded way imaginable. He had a couple of units of Daemonettes right on the line on his left flank, opposite the ruin I wanted to castle in. He had decent shooting (a couple of Deredeos and some Havocs) but not so much that I couldn’t take it. So naturally I deployed to protect the Whirlwinds except because of the limits of the DZ I put my Infiltrators slightly forward to let them… screen I guess? Which of course my opponent immediately took advantage off, bounding the Daemons forwards and charging through the wall. He slightly high-rolled to kill all 5 of them, but either way, what happened next was going to happen regardless – he touched all three Whirlwinds and took them offline. He also killed my Leviathan with shooting because surprise surprise, it was the only good target. I had also deployed my banner so poorly that even with 9″ coverage it was not touching the guys it needed to (there was no reason for this except switching my brain off) and just in general I did everything wrong that was possible to do wrong.

In the event, losing the Leviathan so early was too much, as was having all three Whirlwinds tied up early on (and thanks to my disastrous deployment he kept tying them up, which meant they shot like once or twice between all three).

Despite the mess this became a really fun game as I desperately tried to keep myself in it, and I still killed a ton of stuff and was ahead on points for the opening 2 or 3 turns, but eventually I was unable to keep up and the Slaaneshi Marines overwhelmed me. It was a good lesson in what to prioritise and when. Previous opponents I’ve played this army against have had a lot of shooting and not much fast combat, so deploying the Whirlwinds where they were would have made sense, but in this game it was completely the wrong choice and I was brutally punished for it. Hopefully I don’t repeat the mistake against, say, someone’s hideous Possessed bomb.

That’s about it from me. I land in Vegas about midday on Wednesday and will probably be absolutely dying after the flight, but attempting to struggle on to a respectable bed time so that I don’t spend most of my time in Vegas waking up at 2am and ready for bed before dinnertime. I’m looking forward to hanging with the Goonhammer crew, my real life friends who are coming from the UK, and of course the Warhog boys from the frozen wastelands of North Dakota. If you see a Goonhammer shirt, come say hi! It’s 50/50 either me or Wings, and you’ll be able to tell which because one of us makes good decisions and the other will have just flown across the Atlantic after an all day tattoo session. Hint: I am not the one who makes good decisions.

See you in America!