The Road to NoVA: The Final GT Lists

If you’ve been following the Road to NoVA series, you’ve seen us planning out our lists, trying out different builds, and frenziedly painting models as we suddenly realise it’s the middle of August and we’re not finished yet. Many of the Goonhammer crew are going to be playing in the Narrative event, but five of us are heading for the GT – TheChirurgeon, Corrode, ANAMal.NET, and freshly-arrived interlopers Naramyth and Boon. With that in mind, we’re going to break down the lists we finally arrived at, what we think their strengths and weaknesses are, and fatally give up the game plan to anyone who cares to read this.

Here it is, in all its slightly unfinished glory: 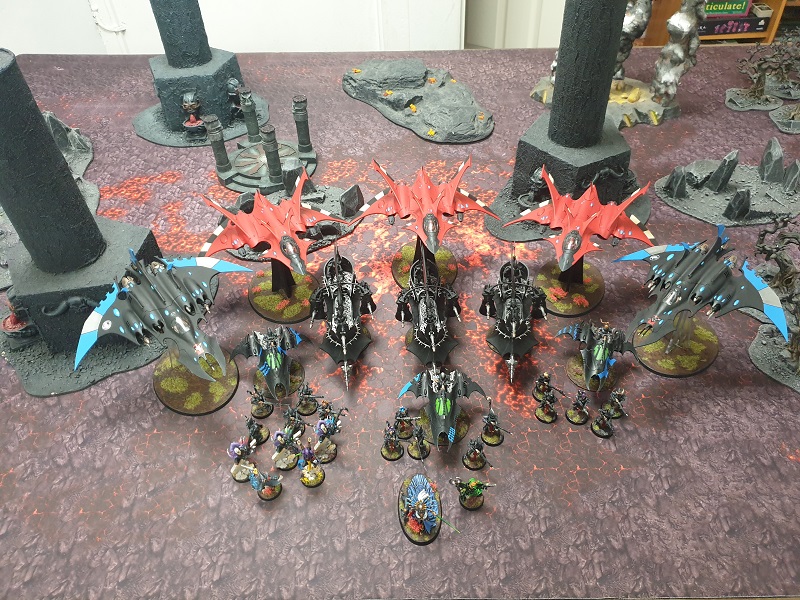 Many plane, much gun

2,000pts of Aeldari soup, pulling from all four possible sources. If you’ve read my most recent Corroad to NOVA, you’ve already seen the list:

I have a worrying feeling that this might be one of those cases where I’ve taken lots of good options which produce less than the sum of their parts – in particular, I’m still debating whether it’s smart to make a last minute change to the Solitaire so that I get a full Dreaming Shadow detachment, since yes having the Midnight Sorrow stratagem available is really great but the chances of me having the CP handy are…. minimal, whereas having one or two Death Jesters popping off on death might be great.

This is partly being influenced by a practice game on Wednesday where I got absolutely stomped, but that game is one of those atrocious ones where it’s genuinely hard to assess because the dice in both directions were so ridiculous that it’s hard to make a judgment (some brief examples – it took two Crimson Hunters and a Razorwing to kill a single Venom, which included the first Hunter rolling 2 and 3 to hit with the pulse laser and four 2s with the starcannon; I rolled a d6 smite with Yvraine and my opponent 6+ FNPed 3/5 mortal wounds; my opponent shot at my 4-wound Venom with his Venom and killed it with the splinters; two Ravagers achieved zero wounds against a Hemlock that was right in front of them). I definitely made some poor decisions which cost me, but probably not so bad that things deserved to fall apart as much as that.

Fingers crossed that all that bad luck has shaken out, and that I don’t fly across the Atlantic to get my clock cleaned for two days straight, especially since I still have the Ravagers to finish painting. On the plus side, at least the clowns are finished now and look really cool. 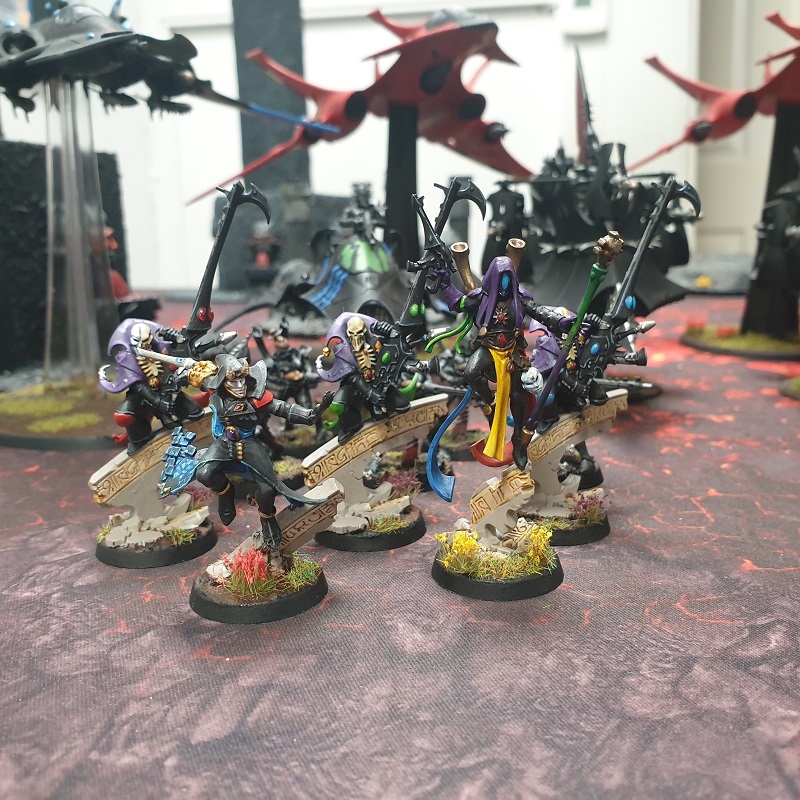 This is more or less what I’d been planning to take the whole time, though at some point I swapped out a pile of Cultists for a Rhino full of Berserkers and an Exalted Champion. I did this in part because I wasn’t happy with how a single blob of Cultists was playing, and in part because I didn’t have enough autogun Cultists. There are also some areas where the list is inefficient, such as the Berserkers being Black Legion instead of Red Corsairs. Being able to advance and charge would have probably been smarter, and I could have run them with Huron, who can fit in a Rhino. The upside to making them Black Legion is that they can benefit from the Dark Apostle and Abaddon’s abilities, and I already painted them as Black Legion anyways. Also the the Red Corsairs detachment is 420 points exactly as-is, so I don’t want to mess with it because I am an idiot child and giggle at dumb shit.

Then I started worrying about the fact that the Cultists weren’t getting me much, and decided to scrap the Black Legion Battalion and drop the Exalted Champion for a Khorne Daemons Patrol, in order to run 20 Bloodletters and a Bloodmaster. He’s no winged Daemon Prince, but this gets me a lot more utility than the cultists were bringing, and suits my strategy better. It’s got fewer CP overall, which stinks, but with 13 CP available pre-game I think it has enough juice to do what it wants to do.

The list’s big trick – and one that I hope gets me a couple of games – is the Kytan, where I’m taking advantage of his BLACK LEGION and HERETIC ASTARTES keywords to drop abilities like Warptime, Benediction of Darkness, and auras on him. He’s two wounds less than a Knight, but he comes with a 5++ all the time, the ability to regenerate wounds (and be healed by the Warpsmith and Lord Discordant), and he can benefit from the Daemonforge Strategem. Also, he takes some heat off of the Lord Discordant. He’s also got a stupid good threat range, being able to advance and charge for 1 CP as part of a Soulforged Pack, and with Warptime letting him double move, he’s even more dangerous. I’ll just need to make sure I don’t outkick my coverage and leave him stranded. 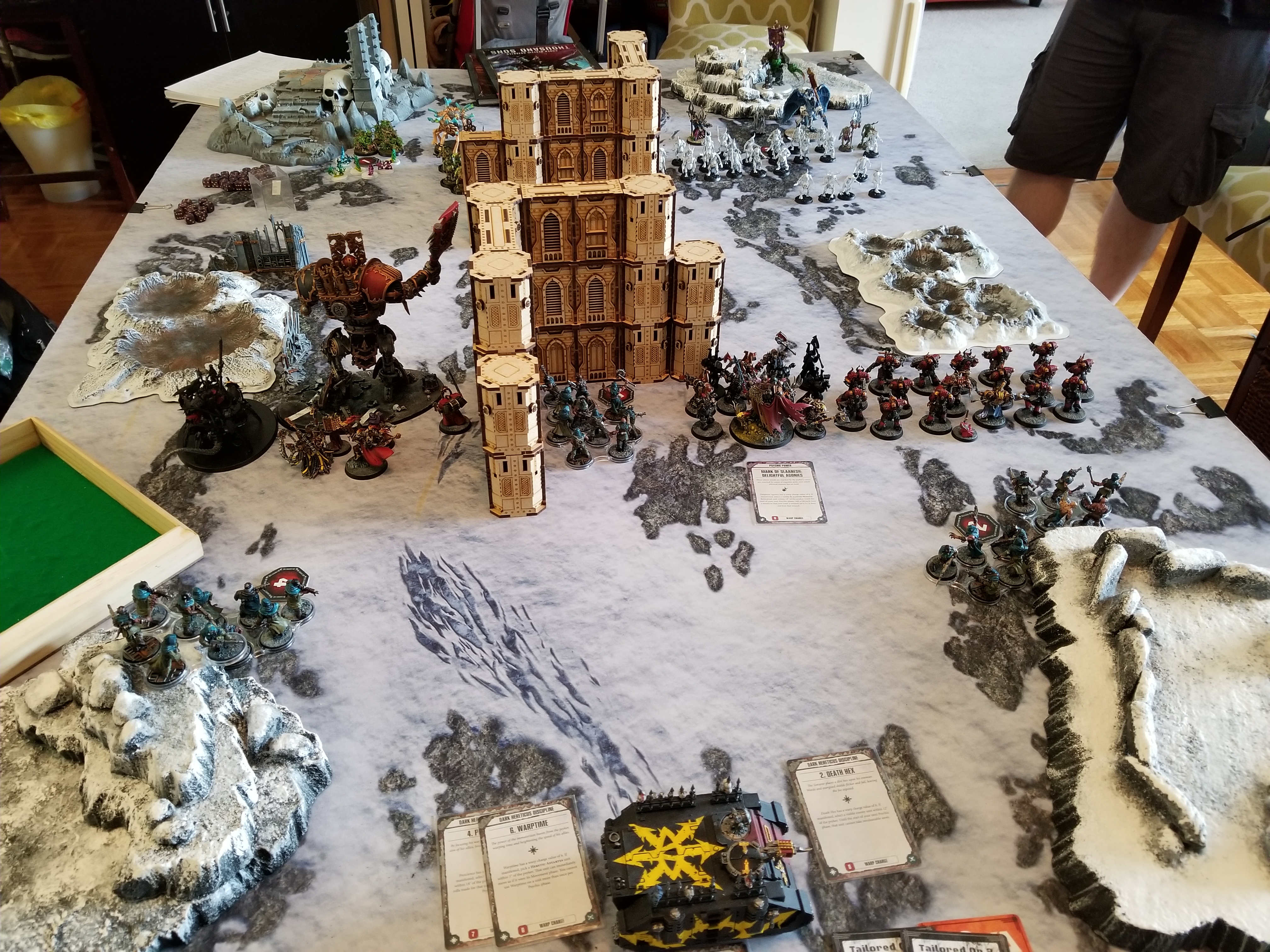 Fuck I hope this works

My previous version of this list sucked real bad, getting housed in all 4 practice games and tabled in 2 (it would have been a third, but the game ended when I still had two models left). I changed it up a bit, dropping the Inceptors and some Vets (I had points left over and nothing to use them on) for a second Dark Talon (TheChirurgeon owned me by sending me this with the dictate that I have it painted in time. It showed up last Friday), and upgrading the Talonmaster to Sammael in his Land Speeder. I have played zero games with this list.

3 Company Veterans – all with Boltgun and Bolt Pistol

The basic strategy is the same: zoom the Ravenwing elements up the table, while keeping the BattlePile together under all those overlapping auras. Sammael’s to-hit aura is better than the Talonmaster’s to-wound aura, and he already has a built-in 4+ invulnerable without having to advance (and burn CP on Speed Of the Raven to still be able to shoot), so with that and the extra punch of the third jet I should actually have something approaching a credible alpha strike. The other key difference is that I’m going to stop treating the Pile as a static defense, and move it around more. I want to focus on keeping the characters screened, but with the CC elements (Azrael and the Primaris Lt) in range to heroically intervene or otherwise participate when I’m inevitably charged. I’ve got a final pre-GT practice game scheduled with Corrode for next Thursday, literally the last possible minute.

All in all, I’m glad I did the practice games, and I’m still excited for the GT, even if I had to do the one thing I wanted to avoid, and paint a new unit at the last minute. Also I am extremely glad the new Space Marine Codex isn’t in play – it wouldn’t help my list at all, but would have represented a massive buff to all other Marines I’d see.

My approach to list building has always been somewhat non-standard as I tend to forgo the dominant lists in the meta for something that is a little more uniquely my own. My favorite thing to hear upon arriving at a table is “I haven’t seen those before.”

It’s for this reason that I have gravitated to the new Ynnari – a faction I previously loathed for its clear abuses. They’ve recently replaced my favored option of a Harlequin Outrider or Vanguard detachment in my standard ITC lists. Honestly, I do not have super high expectations for NOVA as I think there are better options for my list in this format, but here’s the thing – Wraith units are really goddamn cool and I’ll fight you if you think otherwise. 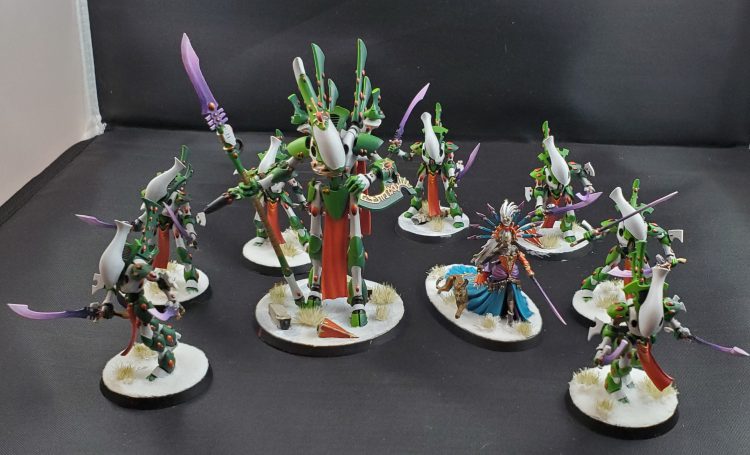 Big Papa Slice and the Ghostly Bois (still in progress)

In building this list my basic mantra was self-sufficiency – I want the army to be able to function independent of psychic powers. Things like Shining Spears, Dark Reapers, Skyrunner Conclave, etc. I’ve found to lean far too heavily on multiple physic powers going off reliably to justify their cost… and when they don’t then oh boy, good game.

So with that, I’ve chosen casters that are reliable, or powers that are of a lower value (Conceal) that have a specified target that are benefited, but not reliant upon its casting. The army itself is surprisingly not CP intensive which is a big shift from previous iterations with Harlequins.

The planes, as is standard, act as a screening or first-turn go second charge blocker from things like Genestealer/Boyz blobs and the dreaded Lord Discordants and then screening thereafter as appropriate. The Wraithseers are both surprisingly tough and surprisingly fast after advancing on T1. The nice thing about these guys is that with the Wraithcannons I can still fire after advancing which means I can also Fire & Fade to get one of them up the board even quicker, representing an immediate big boi threat by T2. The Slicey Bois act as support for the Wraithseers, providing a mass of attacks that they otherwise do not have.

The rest of the Craftworld elements act as deep-strike deterrence, counter-assault, and general tough to shift backfield objective sitters.

If you have been following my Battle Reports you know it’s the robots that are going to war. Despite the last couple weeks of my brain digging into my original love I’m currently in the running for the ITC Season Best in Faction trophy and therefore any large events for the rest of the season will be Ad Mech. So, what exactly am I bringing? 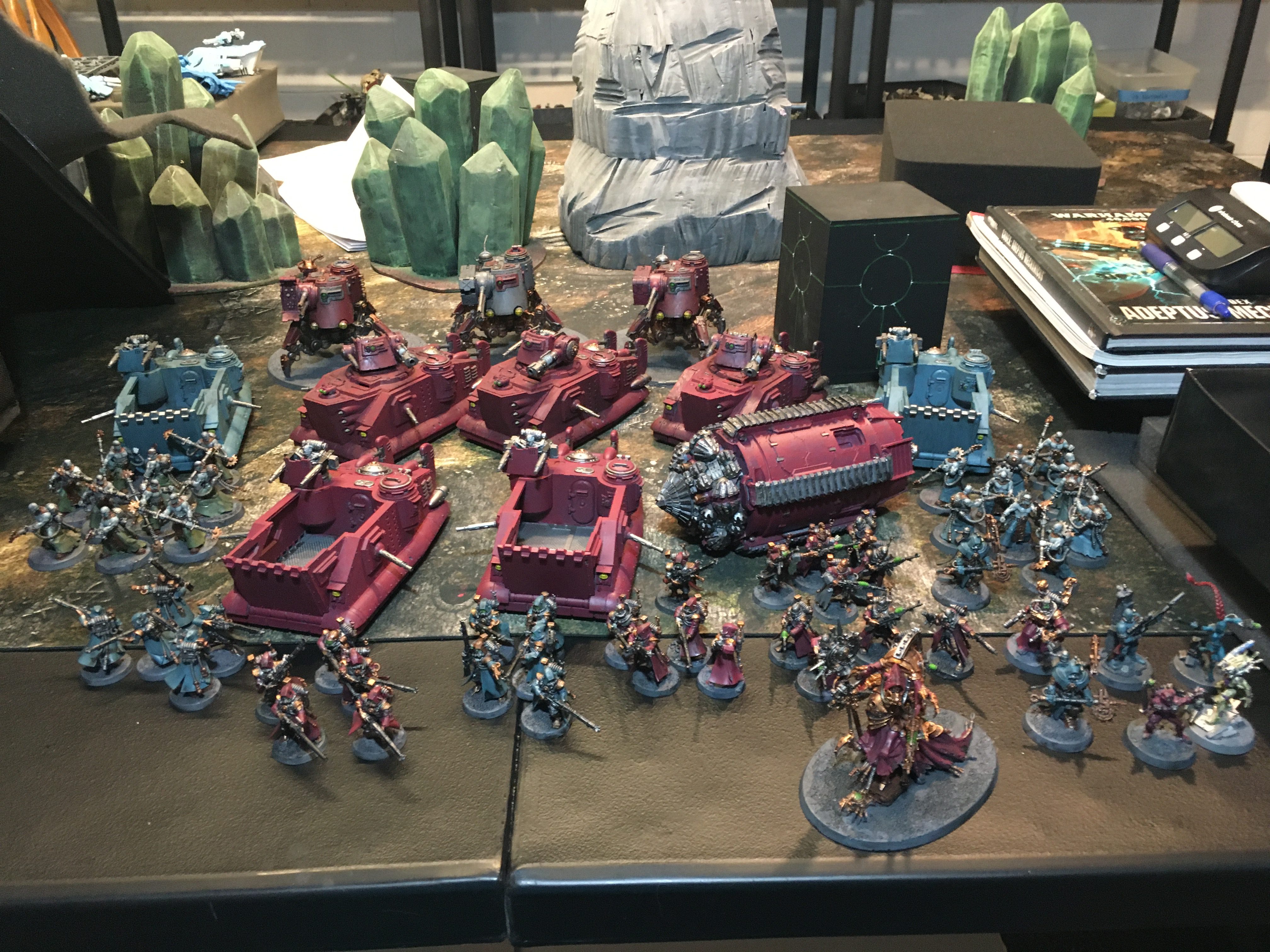 It’s the hillbilly robot yacht club, unchanged. I’m taking the exact list I brought to the last RTT I attended. I mainly play ITC, however, I think this list translates well into the NOVA format. I of course lean into Shoot the Big Ones, and with 17 non troop units on the table Moment of Blood Shed is a reasonable pick. However, Strike the Rank and File can be a trap as all my troops can hide in rides, and with smaller and very mobile units I can grab Recon and Breakthrough easier than a horde army.  I am comfortable at playing (the ideal according to Wings) progressive missions, especially with claiming at top of turn with my boats full of multiple units, but can also turtle up and go for end game with some late game mobility if I run into something that would make me want to be the castle. Decimation seems only fine against me. I have exactly three units that cost more than 112 points so I’d be pretty well tabled to get all the points from me, and with four repair guys running around I can keep all the tanks generally above the half wounded threshold.

Finally, I’m just happy playing this style of list. I love mechanized play, Shoudpsalm and annoying amounts of wounds on the tanks makes everything stick around a little longer than they “should”, there is a close combat element that makes getting close a dangerous game and forces answers on otherwise unimportant vehicles, and there is distributed threats across the entire army making every unit a threat, but not so threatening that any one piece requires obvious focus fire.