We’ve done a lot of analysis of the 40k and Age of Sigmar metas over the last few months, looking at faction win rates and identifying which lists are doing well in the meta. Well today we’re extending that work to Kill Team, looking at early tournament results for the game and seeing how things stack up. And these results are fairly surprising and what you might call “not great.”

Before we dive in, we should talk about where this data comes from. Our data here comes from Best Coast Pairings, the premier tournament app for Warhammer. Since the new Kill Team launched, there have been 12 Kill Team events run with 8 or more players, run in the US, Great Britain, and Spain (Kill Team is surprisingly popular in Spain – most of the tournaments run over the last month have been held there). That gives us a sample of 747 games, with a mix of 3-, 4-, and 5-round events in the mix, including one at Warhammer World run by Games Workshop. That’s a pretty good starting sample, even if we don’t quite have enough data to cover everyone.

Alright, so with that out of the way, let’s dig into the results and… oh dear. 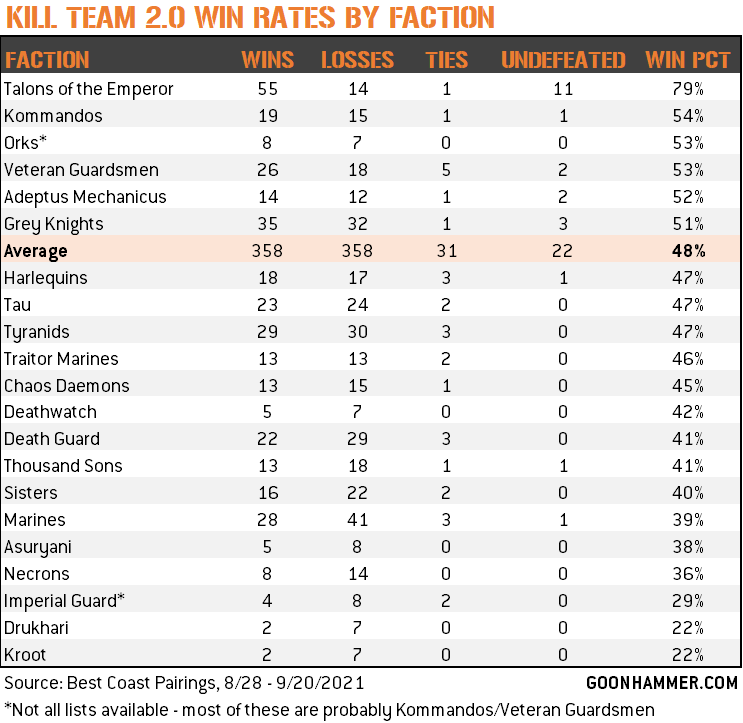 One thing worth noting: We don’t have all the lists – they aren’t all publicly available – so it’s difficult to figure out how many “Ork” lists are actually Kommandos, and how many “Imperial Guard” lists are actually Veteran Guardsmen. There is at least one of each in those categories from the lists we do have, so it still bears breaking out, but it’s worth noting that there are a couple of gaps here.

Alright now for the other thing: Talons of the Emperor – or Adeptus Custodes, as most players will think of them – have an astounding 79% win rate so far. They’ve also won all but one of the events in our sample, and have gone undefeated 11 times in events, for a record of 55 wins, 14 losses, and 1 tie. They are without peer in Kill Team 2.0, and it’s not particularly close. Grey Knights have also put up some respectable numbers, and Kommandos and Veteran Guardsmen also appear to have done alright. Mechanicus have too, which is good news for players who want to switch to the new Hunter Clade, which appears to be a more powerful variant of the faction.

So why are Custodes so good?

Thundercloud: Kill Team, in the releases of factions built for Kill Team (Veteran Guardsmen, Kommandos, Novitiates, Tau Pathfinder Operators, Hunter Clades), appears to be largely built around reasonably large (10-14 operatives) Kill Teams. These teams don’t have saves better than 4+, don’t have more than 10 wounds in general, and are able to fairly rapidly kill each other. They’re built around Kill Team as a game where you Conceal fairly often and models are reasonably fragile. If you’re in the open, you’re likely to be in trouble, and hugging cover to advance to where you can invalidate you’re opponents Conceal orders is a normal thing to do.

The current problem is that elite teams break that. Normally this is made up for by having smaller numbers (5 or 6 for power-armoured teams) and topping out at 15 or so actions per turn or giving up speed. However double shoot or double fight actions mitigate this somewhat (which marines, plague marines and chaos marines have access to) and let you fire up to three times with each model including an Overwatch shot.

And then you have Custodes. With 4 APL, a combined double shoot/double fight with Peerless Warriors and the ability to take another action and not have it count as an activation in Brotherhood of Demigods. This means that theoretically you could use Brotherhood of Demigods to charge, then activate the same model, Fight, Charge again, Fight again and Shoot. This would let you potentially move 16” in a turning point while Fighting twice and Shooting, and then coming back and Overwatching later. On top of that Custodes have a 2+ save, 18 wounds and can soak almost any weapon that can be thrown at them. Their own shooting is generally enough to one-shot a 7- or 8-wound model in a single Shoot action, and their melee will generally kill a 7-wound model on the first strike with a critical hit. Custodes rolling 4 dice for shooting are fairly likely to get 4 hits, and Guardian Spears are P! so if any of those hits are crits, the target only rolls 2 defence dice and is pretty likely to take 8+ damage and die. If it has the wounds to take that much damage, it likely won’t survive a second Shoot action.

This means that a single Custodes ‘in the zone’ can blender their way through 2 or 3 models in a turn. Then you have four of them doing that. Guard equivalent teams can’t handle that, and marine teams will generally have one or two more models than a four model Custodes team because they’re elite, and they can’t take an exchange with Custodes either shooting or in close combat. You may have a melta or missile launcher, but if you shoot your shot, even if you nail a Custodes, you will lose the model to return fire as you’ve had to engage and potentially get into melee range.

Kill Team, with decent terrain, often ends up with small groups of two or three models per side trying to contest objectives. Imagine three guardsmen trying to take on a Custodes. After the Custodes activation, there’d be a couple less guardsmen, and Custodes will hold the point. Custodes can also play a strong game on Tac Ops. Personally I’ve played Seek and Destroy, as I’ll be trying to table my opponent anyway, but having tac ops like killing the enemy leader in the first two turns, killing more enemy operatives than you lose, etc etc. You can see why an incredibly murderous team like Custodes can max these out.

Through a combination of the action economy, raw stat line and ploys, Custodes deliver an incredible punch, and still have four models when compared to almost all marines with five. They murder elites, and the other elite models with the same wound count, Heavy Intercessors (it’s like if you got Custodes from Wish.com) or Tyranid Warriors (get six models, but lower save and 2APL) can’t compete with the other things Custodes can do.

TheChirurgeon: Don’t forget Sisters of Silence, either – Custodes could potentially have trouble running up against Grey Knights or Thousand Sons, where psychic powers and mortal wounds might close the gap, but when that happens, a Custodes player has the option to just swap in five Sisters of Silence, tailor-made to turn off those factions’ psychic shenanigans.

So we understand the problem. How could you move them back towards balance with other Kill Teams?

There’s a number of things you could do:

My personal opinion would be to look at fireteam composition, and limit the number of Custodes on the table to three. How you would work this while allowing Sisters of Silence fire teams to be mixed in (1 Custodes plus 5 sisters? 2 + 5 is still very very strong. Reduce the number of Sisters? Have a new fire team structure?).

I’d also rather a wholesale replacement with a Hunter Clades style Talons faction where you have ten operative slots, but each Custodes counts as three slots, including the leader, but Sisters have some specialists available to incentivise taking them.
This is going to be tricky to get right from a design perspective, and there’ll be some people unhappy, but a well thought out and tested nerf is necessary for Custodes to avoid them dominating competitive play in a way that damages the game.

It’s a bit difficult to figure out what to make of the game’s other factions given Custodes dominance. We don’t have head-to-head data and haven’t the time to pull that manually so at the moment we can’t pull out what this looks like without Custodes in the mix. That said, its’ clear that the starter box factions hold their own pretty well (though not incredibly so), and that a large number of factions fall within that 45-55% band that mark competitive factions. The big surprises here so far are Death Guard, who underperform just a bit, and Space Marines, who come out much lower than we’d otherwise expect (though Deathwatch do better, albeit on smaller sample sizes).

T’au, Adeptus Mechanicus, and Sisters of Battle all appear to have reasonable win rates at the moment, and these will likely improve as players get their hands on the new rules for these teams, starting with Hunter Clades for the Mechanicus.

The factions that appear to need real help here are Craftworlds and Drukhari, Kroot, and Necrons, who all average abysmal win rates and indicate bigger problems.

Finally, the question I kept getting was: “Where are Genestealer Cults in our list?” Well, no one played them. RIP.

That wraps up our inaugural look at the Kill Team meta, which was much more boring than we were expecting. Next time – in another month or so – we’ll revisit this and look at how things have changed, if at all. In the meantime, if you have any questions or feedback, drop us a note in the comments below or email us at contact@goonhammer.com.